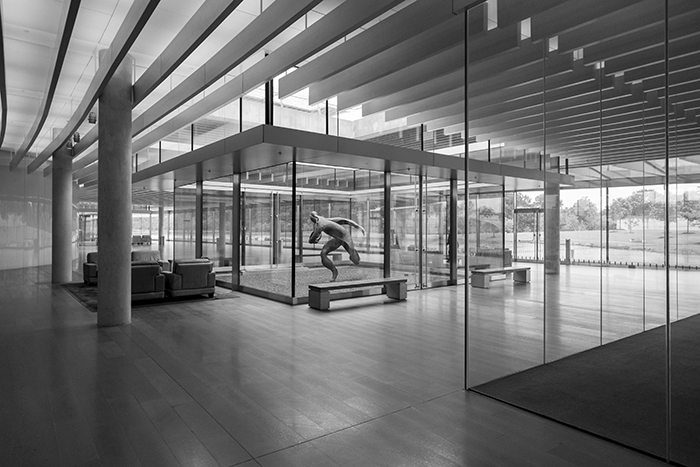 Rain does have a way of getting in the way at times, however…  You make it work.

It rained incessantly for two of the three days I was at Janelia Farm last month and the image above was made on one of those rainy days in an effort to get something that popped when the light outside was totally flat and grey.  To get the right combination of light and contrast for the image above, I used an infrared filter which explains the high ISO rating and wide aperture for an architectural image.  Once I had the exposure locked in where I wanted it, all that was left was composition.  Fortunately, as I’ve noted before, the architects of Janelia Farm thought quite a bit about that which becomes evident before you even walk through the front doors. 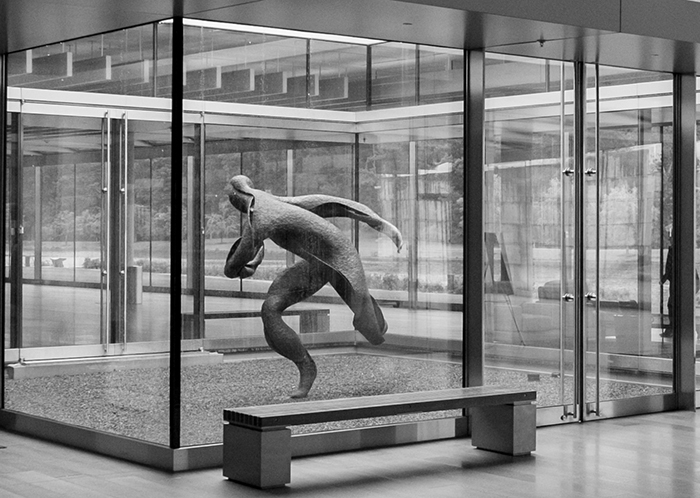 Though the introductory image was shot wide open at f/2.8, I did not have to worry much about sharpness.  With the Fuji lenses, in this case the 14mm f/2.8 R you are not giving away much for an architectural shot by opening up the aperture all the way.  They are amazing lenses.  This image immediately above for instance is a 100% crop from the intro image and it is tack sharp, even down to the rain dripping down the glass in front of the sculpture. 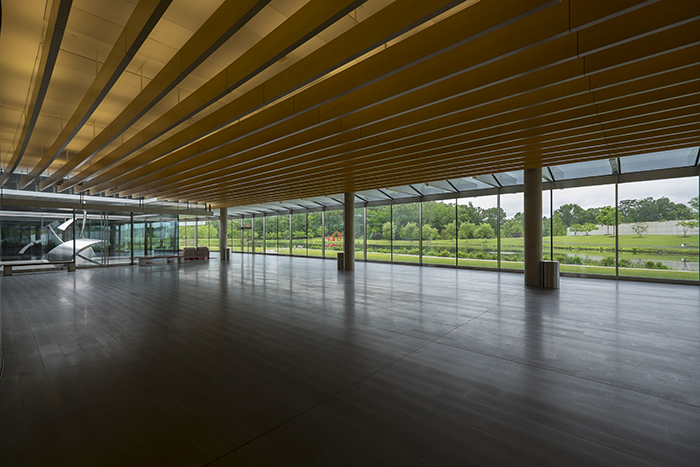 The last day I was at Janelia, it stopped raining and I was able to get outside during the day for some images.  That is not to say that there were not images made in the rain, but those are for another post…  There are many images from this visit yet to come.  However, the image above shows off more of the atrium with the second light-well to the left.  The space is amazing and shows off some of the structural glass at the front of the building as well as in the light-wells.  Janelia Farm has more structural glass than I’ve ever seen before in my life.  Gerry told me that it is one of the largest installations of structural glass in the world and I believe him.

This particular image was made with Fuji’s new 10-24 R OIS lens and what a lens it is.  My friend David found this lens to be pretty special and was claiming it was incredibly rectilinear.  His samples were impressive enough, but until you’ve shot with it, you have no idea of what a nice lens it is.  It is truly rectilinear and is waaaay sharper, particularly at the edges than my Canon 16-35mm f/2.8 which is the equivalent full frame lens focal range.  Fuji apparently had decided that a better solution to this particular wide angle zoom was to move to f/4 with image stabilization instead of f/2.8 and Canon seems to have agreed as their new 16-35 is also an f/4 with IS.  I’ve not yet shot with the Canon f/4 lens, but Fuji has given Canon mighty big shoes to fill.  I’ve got a bunch of “behind the scenes” images to come with the Fuji 10-24 lens that show off some of what makes Janelia tick and I was incredibly impressed with its performance.