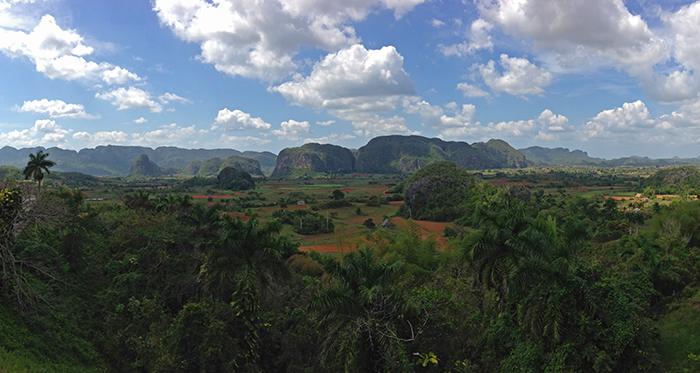 Viñales, Cuba… Its one of the most beautiful places I’ve ever seen with an almost primeval feel to it that led several of us to comment that it looked like something out of Jurassic Park.  The image above (get a full resolution image here and a black and white version here) was what greeted us later in the day and I *wish* that we could have been there later in the day for sunset.  The Viñales valley is also a UNESCO World Heritage Site, and I was anxious to see some of the native fauna.  Unfortunately, the bee hummingbird (Mellisuga Helene), smallest bird in the world I was hoping to see proved elusive.  I thought I heard hummingbirds, but could not find them.  Next time perhaps… 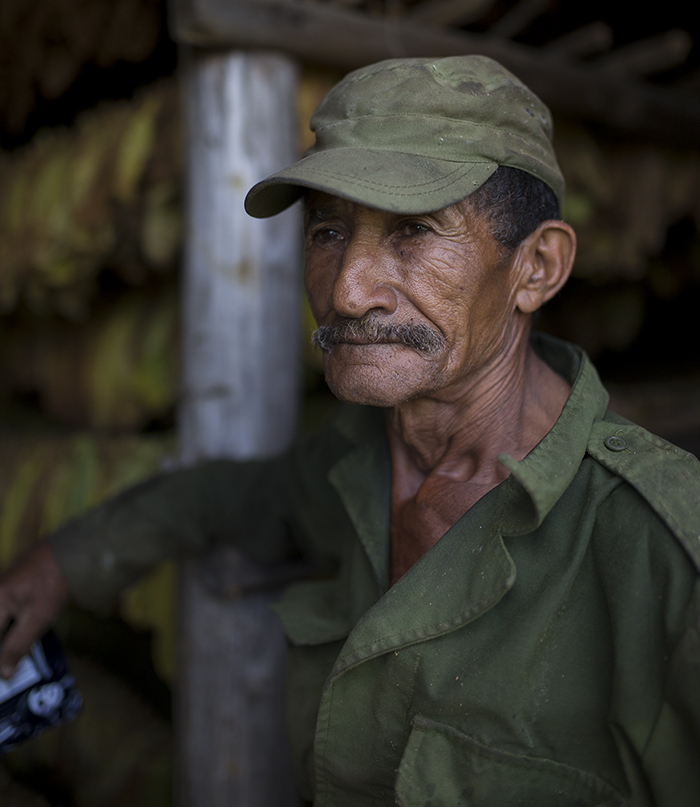 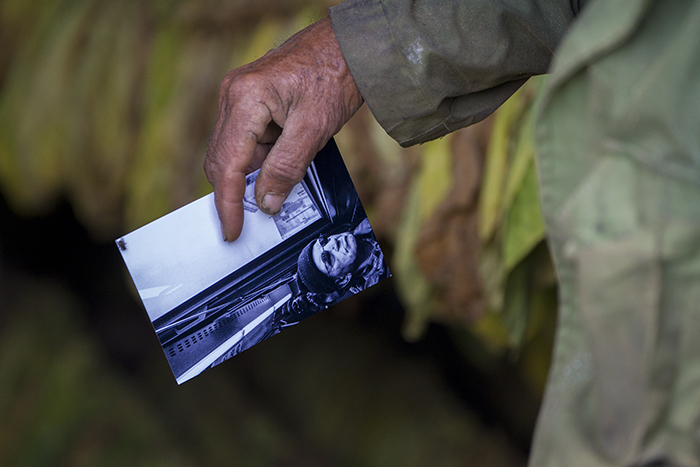 We got an early start and rode in a bus out to a remote part of Cuba to visit a couple of farms.  The first one was a bit of a warm up of sorts to see how tobacco was grown and the initial stages of processing including drying of the leaves.  The gentleman in the two pictures above is holding a picture made by Brandon Downey who very cleverly printed out a series of photographs of his work to give away.  Brandon is a very talented street photographer and I was simply blown away by his work.  Check him out on Flickr here. 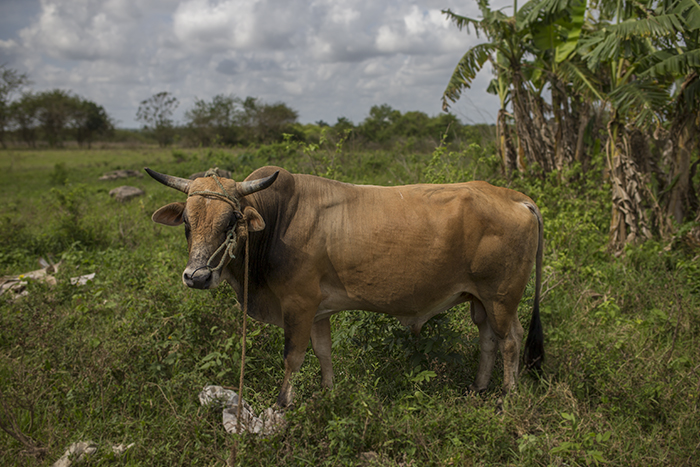 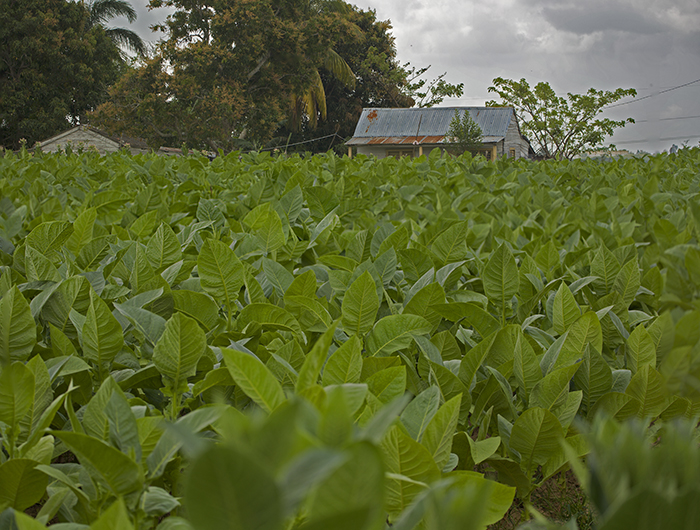 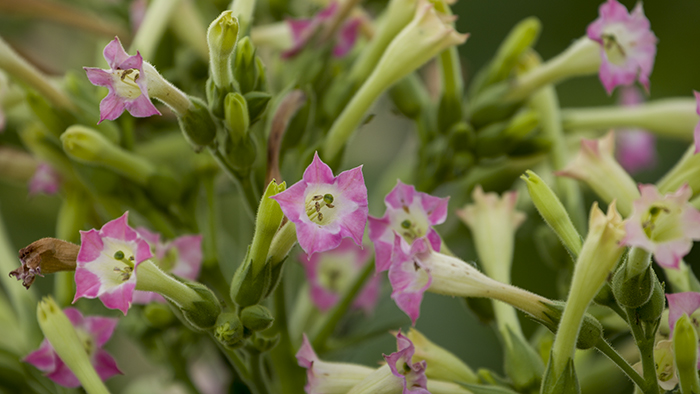 This post is as much about Viñales as it is about a plant from the genus, Nicotiana.  I’d never before seen how tobacco was processed and from the perspective of a farm, one can see the simplicity of the whole operation.  From what I gathered, each tobacco crop is harvested annually by cutting the whole stock at the base of the plant and then hung in barns to “cure”. 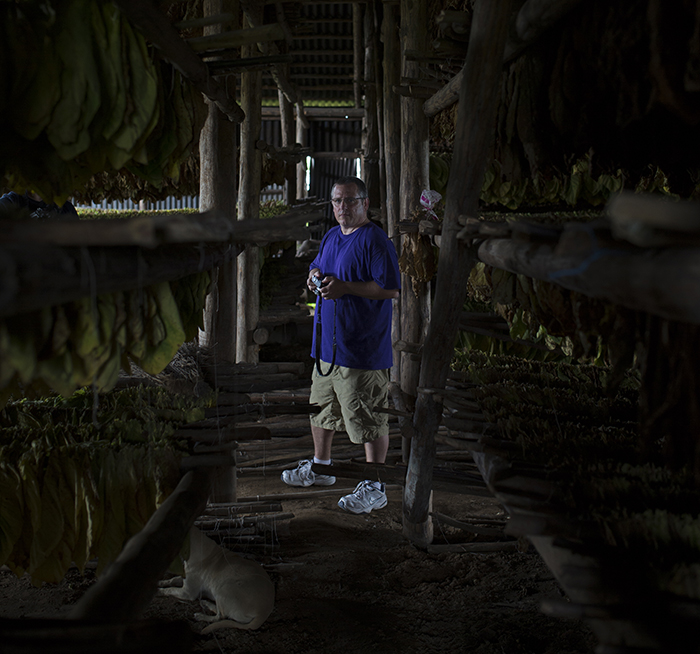 At this farm at least, the tobacco was air cured over 1 to 2 months, in this case, “air cured in the dark” which keeps the sugars low, delivering a smooth, mild flavor yet high in nicotine.  It turns out that many plants contain nicotine, evolved over millennia to be a powerful insect neurotoxin and tobacco has some of the highest amounts of nicotine.  David is seen here in one of the barns where rack upon rack of tobacco leaves is hanging. 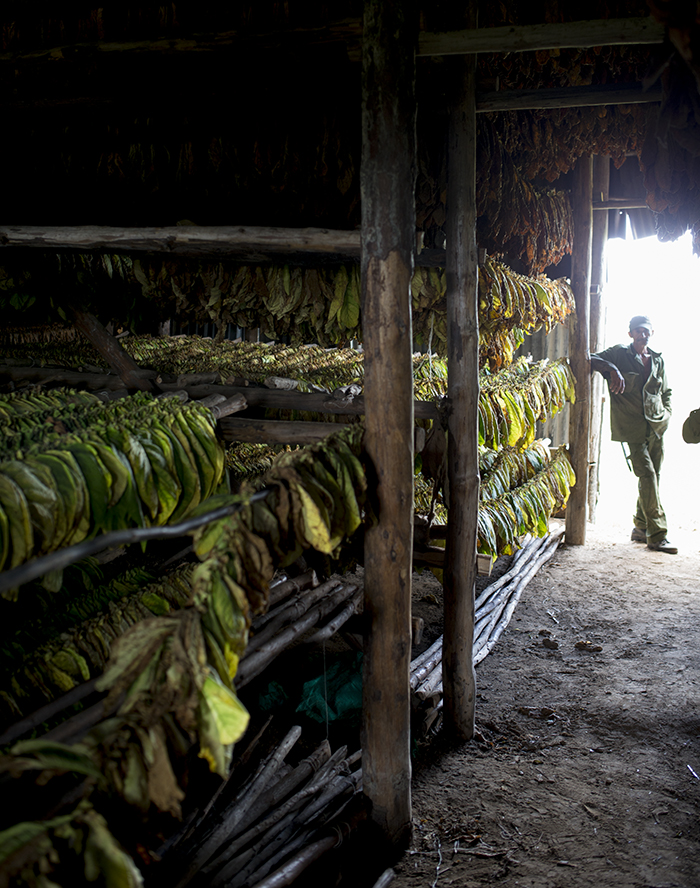 The whole process of curing is actually a pretty complex biochemical process of oxidation combined with degradation of other small molecules that give tobacco its combination of aromatic properties resembling grass or coffee or tea or floral elements.  Other processes in the curing are the production of advanced glycation end products (AGEs).  AGE products are one of the things that make smoking the biggest risk factor for development of age-related macular degeneration (AMD), an area of research I know a little bit about. 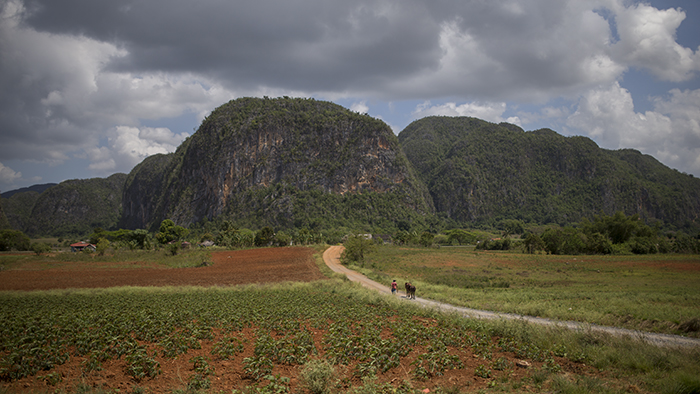 The second farm we went to visit just outside the village of Viñales had been in the same family since 1882.  The farm grows tobacco, but also corn, cucumbers, tomatoes, yucca, bananas, guava and more.  We had lunch there which really was amazingly good with the first *fresh, fresh* vegetables I’ve had since getting to Cuba.  People in the city don’t get much in the way of fresh produce, even in the restaurants.  So, this was a bit of a treat to have fresh cucumbers and tomatoes along with queso blanco.

The other treat at lunch was being serenaded by two musicians, Ricardo and Domingo who were *AMAZING*.  Mark Heaps and I were joking that perhaps the world best guitarist lives in the valley of Viñales, Cuba.  We could apparently bring back music CDs under the scope of the US Govt. restrictions, so I asked if they had CDs which of course they did, so several of us bought their CDs.  Cuba is full of surprises and in a country with essentially no Internet, and upon returning to the US, I found the band, Guacacha Son on their own website and even on iTunes! 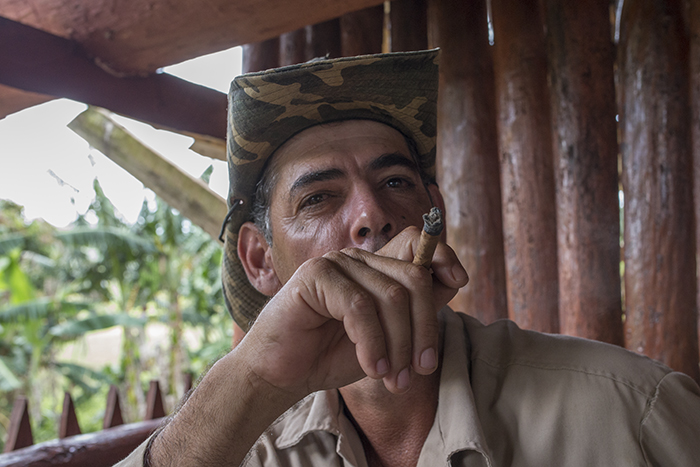 The farmer that ran the operation studied hydrodynamic engineering in school and was reluctant to come back to the farm.  Fortunately, he made the decision to come back and they’ve got an amazing operation. 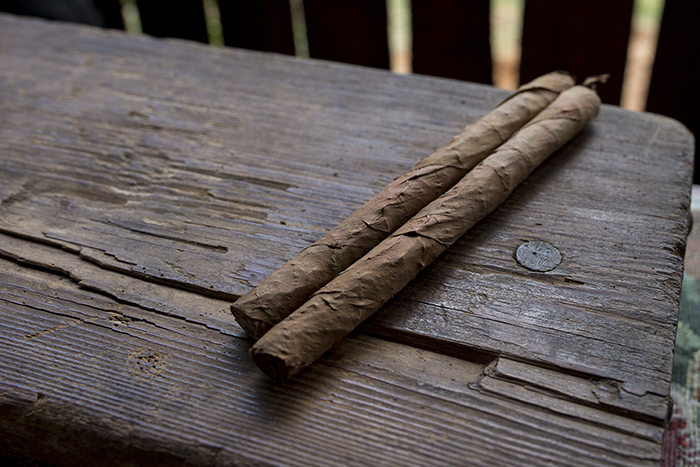 He showed us how to hand roll cigars by taking the tobacco leaves, stripping out the main rib which contains most of the tobacco, then laying them out in a line.  This is followed by bunching, wrapping and rolling the leaves together.  This is followed by wrapping the bundle in a wrapper leaf which is the youngest and most pliable leaf from the plant.  He finished by clipping the end and then handed me the first one, probably only the 4th cigar I’ve smoked in my life.  Of course I could not bring back any cigars, but figured that it was a once in a lifetime experience…  on a farm, up in the remote Cuban mountains, smoking a cigar that had just been made for me by a master tobacconist who rolled it right in front of me.  Who am I to say no to that?  Besides, since tobacco production typically requires lots of pesticides and getting pesticides in Cuba is actually pretty tough to do, essentially all of the tobacco grown in Cuba could be considered “organic”, particularly since even fertilizers are difficult or impossible to obtain.  How’s that for rationalization? 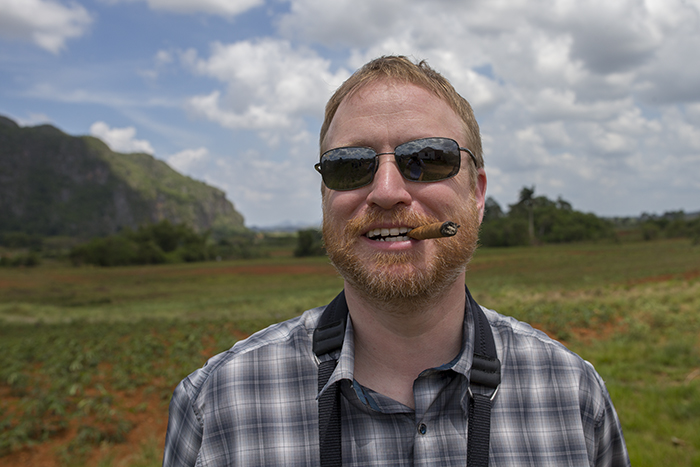 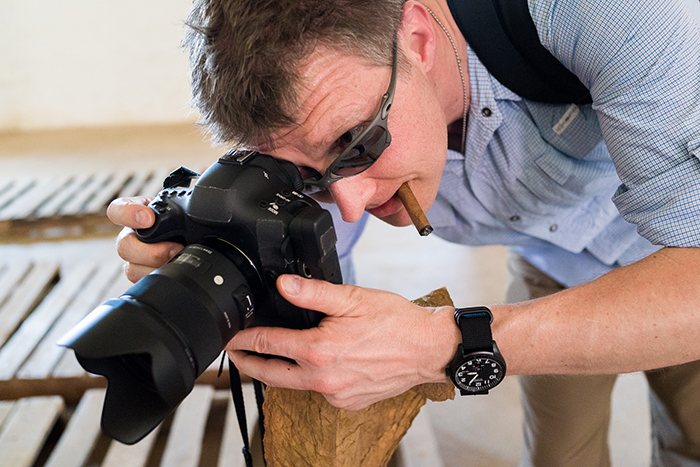 Duncan, Dave, and everyone enjoyed that bit of fun and then drove down the road to a place where they process the tobacco which is bundled, folded and packaged for manufacture into cigars and cigarettes… Mostly cigars from this facility I was told. (The picture of me with the camera above is courtesy of James Duncan Davidson) 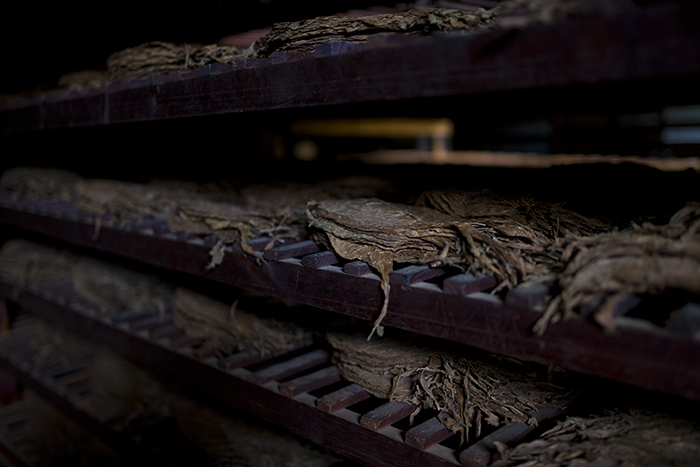 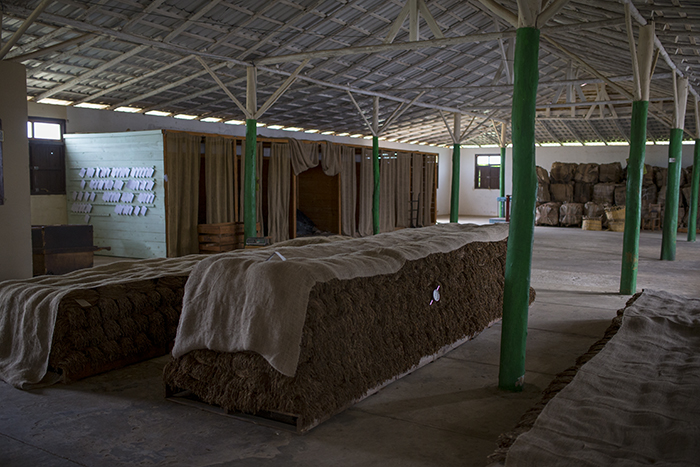 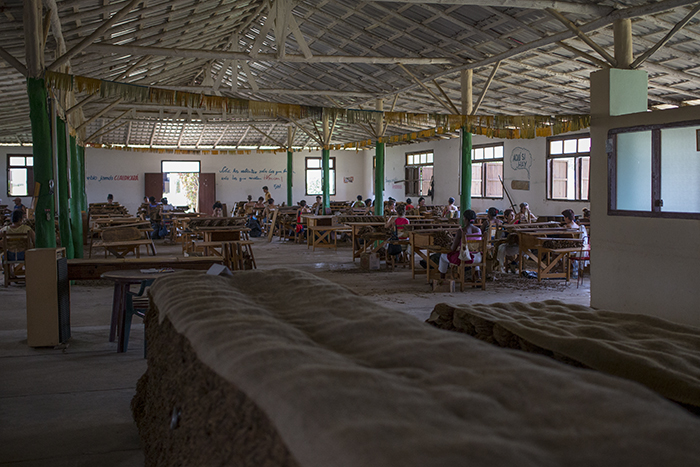 Tobacco comes from the farms to this central processing facility where the leaves are further cured and then women work to process the leaves, removing the central ribs and then packaging the leaves for shipping. 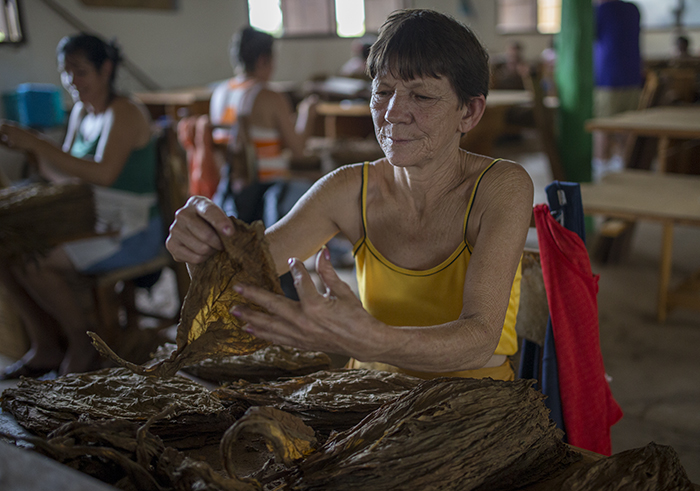 The women that worked there were very nice and encouraged us to take photographs of the whole operation including letting us back in the drying room when we asked.  The place smelled amazing.  Much better than it smells when the tobacco is burnt in my opinion unless you got back into the closed curing area which could almost knock you out with the smell of ammonia. 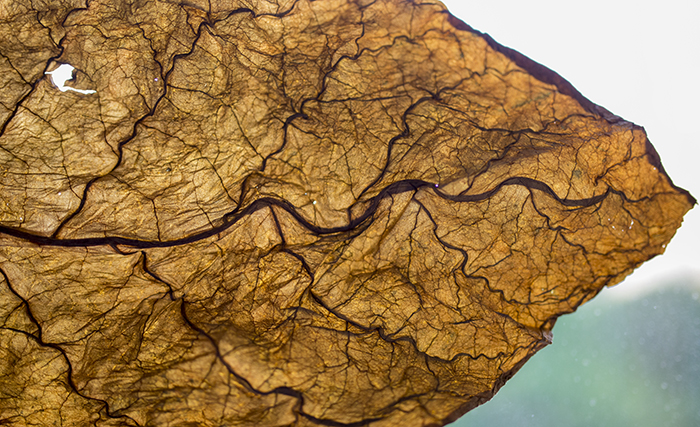 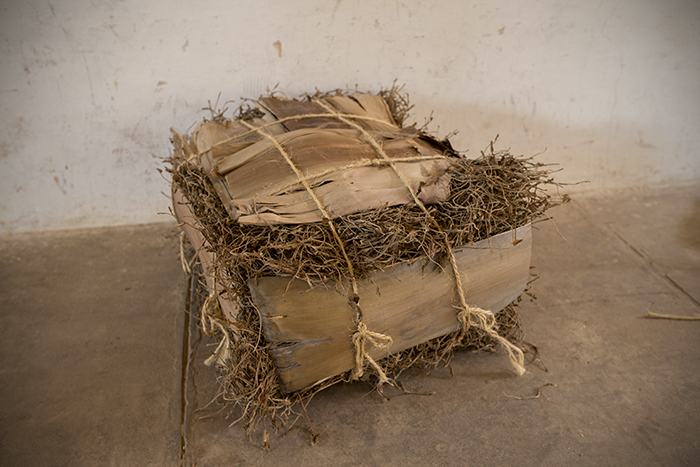 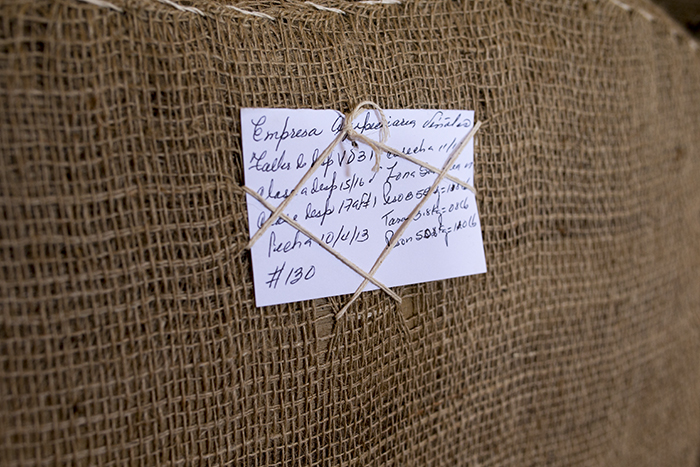 Before big tobacco came on the scene in the 20th century, this is pretty much how tobacco has been grown and processed for millennia.  I have no idea how tobacco is currently processed, but from what little I’ve read, there are additional preservatives and processing that go into it including formaldehydes and solvents.  Aside from the history of tobacco in the early United States up through Emancipation, from the perspective of a small farm, tobacco in the Americas does not seem like such a bad deal.  Of course it is more complicated that than when you factor in the economics, politics and health implications for tobacco, but its an interesting story at the very least.

One of these days, I hope to see Viñales again, to see the people and perhaps to catch a glimpse of that little hummingbird…