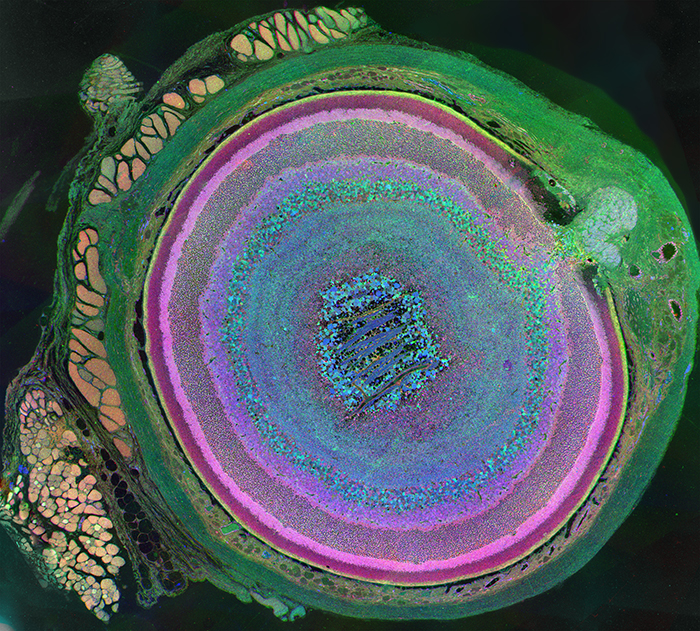 At the behest of two friends, Greg Jones and Chris Johnson at the Scientific Computing Institute, I entered this image in the journal Science and the National Science Foundation‘s Science and Engineering Visualization Challenge for 2011 (video with interviews here) and IT WON first place in photography!

The media were notified of the results on January 29th and since then, there have been a number of interviews for a variety of traditional printed media as well as online media sources. The image will show up in The Smithsonian Magazine in March, its been on NPRs Science Friday, the National Geographic website, Wired, Popular Science, Popular Mechanics, Science (with a podcast interview here and the print version here) and the Washington Post as well as MSNBC, io9, Mother Nature Network, The Guardian UK, CNET, the Huffington Post, NewScientist and of course our own UofU news site, The Daily Utah Chronicle and others.

This image is the retina of a mus musculus, probed with antibodies to three small molecular labels from Signature Immunologics. Anti-taurine, anti-glutamine and anti-glutamate assigned to red, green and blue color channels respectively were used for this image from a 7 channel dataset. This image shows two fundamentally important things about metabolomics: 1) Diversity of metabolomic signatures across cell classes is extensive and in this case, it shows how complex the retina is. 2) Within cell classes, metabolomic envelopes are very narrowly constrained in healthy tissue.

We have used the technique to describe pathological changes in retina and are actively looking at a number of new areas for metabolomics including oncology, gastroenterology, cardiology, botany and more.  Look for more images in the near future from a variety of tissues and systems that we are investigating.

NOTE:  You can get your very own print of The Metabolomic Eye on Snappola here.