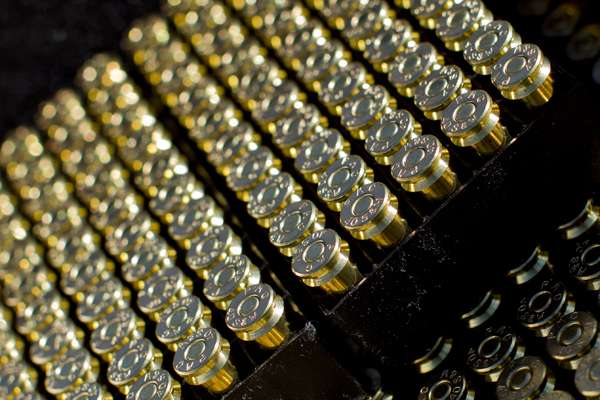 Today was the Media Day just prior to Shot Show.  While last years event was wet and windy, this year we were pleased to note that the weather was more cooperative.  In fact, it was downright pleasant given the snow and rain that I left up in Salt Lake City.  Coverage here will be limited due to my commitments to provide photography elsewhere, but hopefully you’ll get a flavor for the event from this entry. 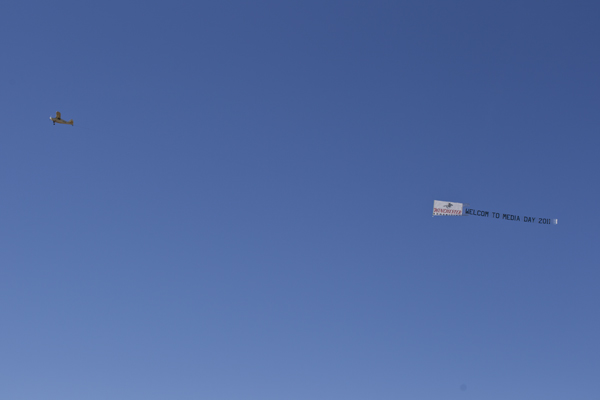 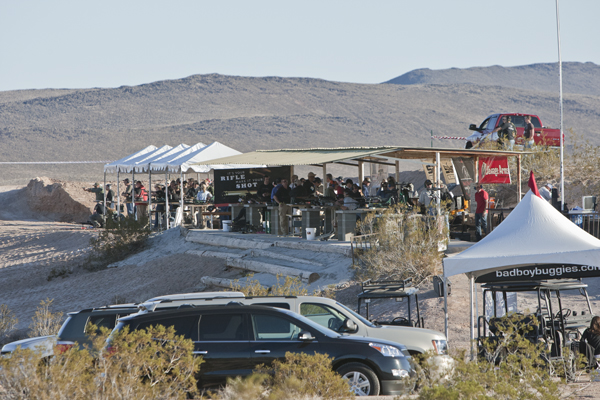 The whole point of Media Day is to provide journalists covering Shot Show media attendees an opportunity to sample the performance of various firearms and firearm related products where they can actually be operated.  In the venue, there are no opportunities to actually operate the firearms for safety reasons in the convention center.  Over 630 media members had registered to attend and I suspect the turnout was even greater than that. 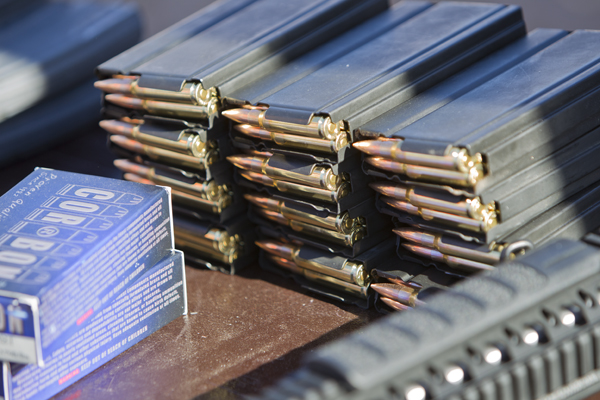 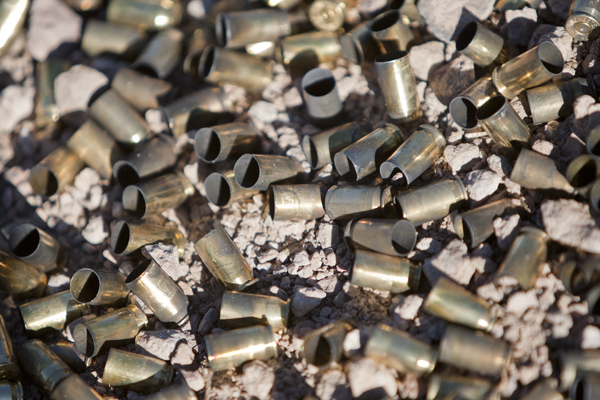 Much ammunition was provided by various companies to provide opportunities to fire the latest and greatest in firearms technology including Corbon, Remington and Winchester.  It is an opportunity to explore a number of different caliber choices for each type of shooting that can be incredibly informative. 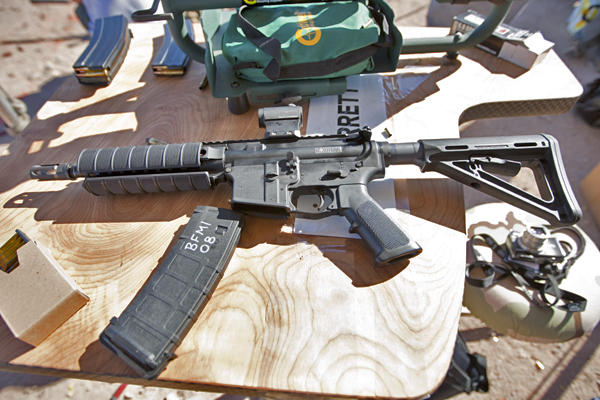 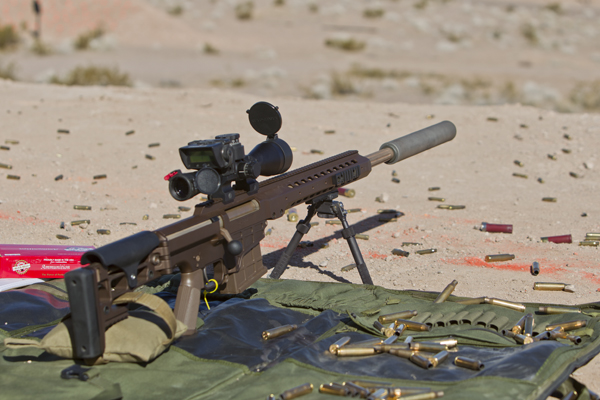 Some of the biggest surprises for me on this trip were products by three companies, Barrett, Heckler & Koch (H&K) and Lewis, Machine and Tool (LMT).  Barrett has long been in the business of producing large caliber rifles for a variety of light armor and anti-personnel purposes.  This trip I tried out their new 6.8mm short barreled rifle which had amazing levels of control when shot in automatic mode.  Despite the larger caliber round on the 6.8mm rifle, it was just as controllable in fully automatic mode as the smaller caliber 5.56mm based rifle.  The other Barrett rifle I shot was the Barrett MRAD.  I had actually been able to shoot one of their prototypes last year and was suitably impressed, but they have done even more refinement work this year to get it ready for production.  It is a stable, comfortable and exceedingly accurate platform with new ways of field servicing to allow barrel changes, bolt carrier servicing, a easily replaceable modular trigger group and more. 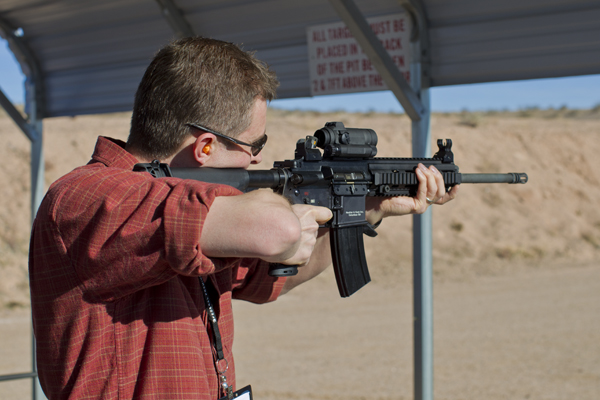 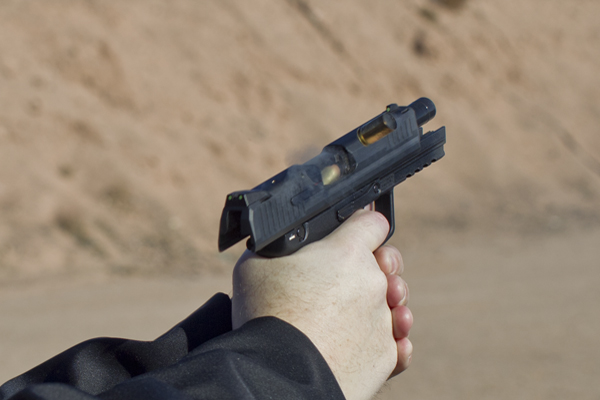 Visiting the H&K folks allowed me to try out the new MR556 rifle.  While I really think that H&K missed the marketing boat on this by not releasing the rifle several years ago in this market, I was also suspicious of how it might perform, thinking that perhaps it was simply overpriced and overhyped for the AR market.  I was wrong.  I get it now.  This is the finest AR type rifle that you can get with very tight tolerances making for a tremendously accurate and solid platform.  The heavy barrel is forged stainless steel.  Controls are smooth and comfortable making easy transitions possible and it is comfortable and *very* accurate allowing the shooter to put rounds on target at distances further than you might consider possible with a 5.56mm round out of a 16 in barrel.  I was also able to get some time on H&K’s HK45 full size and compact pistol, both of which are fine platforms for their tasks.  In fact, I’d go so far as to say that if H&K would put a little effort into the trigger, there would be no reason to select any other .45 caliber sidearm for combat purposes.  Though I have to say that the compact model makes more sense to me and is surprisingly more comfortable and more accurate for me to shoot than the full size pistol with the sci-fi, spiderman like grip. 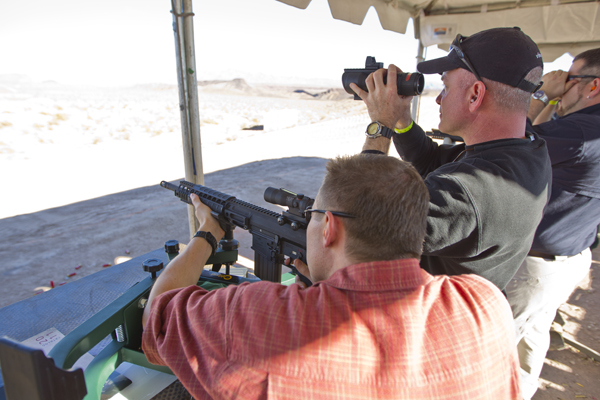 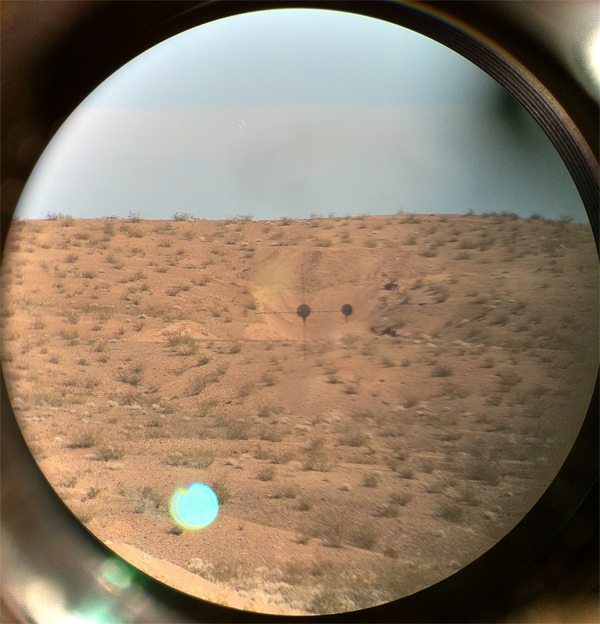 The other major firearm that impressed me was the LMT .308 with a 16in barrel and a Trijicon 3X sight.  Many years ago I used to shoot “long distances” with bolt action .308 rifles.  Long distance in those days means 1000-1300 yards with carefully maintained traditional bolt action rifles that had 26in barrels and 10-14X fixed power scopes.  What amazed me about this experience was that I was shooting a semi-automatic .308 rifle with a 16in barrel and a fixed 3X Trijicon scope at targets 986 yards away and hitting the target with ease.  Out of a 10 round grouping, I hit the target 9 times with one miss due to a flinch.  The platform is very stable, very accurate and the Trijicon sight was surprisingly clear. 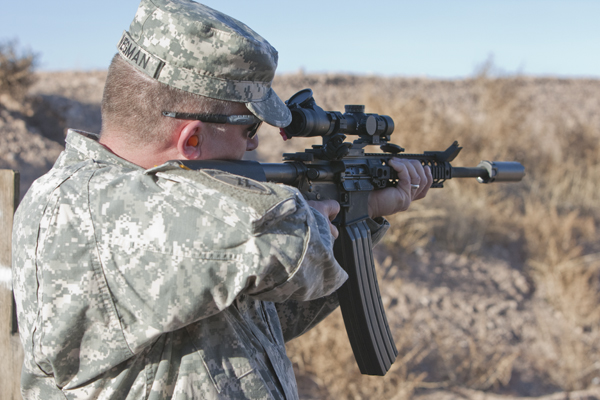 Other items of potential interest were Surefire‘s new 100 round magazines being tried out here by a specops major.  His chicken wing made me feel a bit better about my chicken wing in the pic above of me with the H&K MR556.  I do have to say that while I initially thought this magazine would be absurdly awkward, it was actually decently balanced.  Their 60 round magazines were actually even better balanced allowing for accurate fire with a far greater reserve than the typical 30rd magazine. 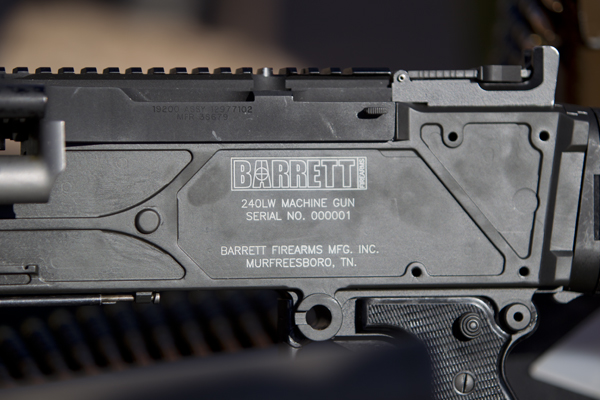 It was also interesting to note that Barrett is getting into the MG240 game with a lightweight model they were showing at Media Day. 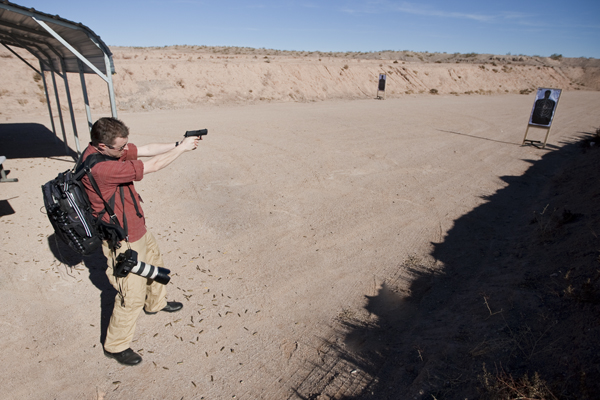 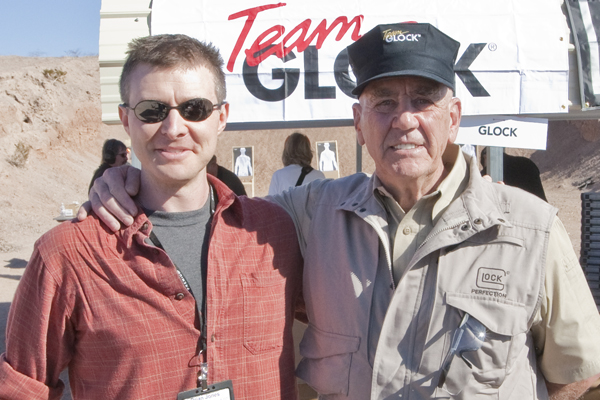 The most interesting item for me was meeting up with R. Lee Ermy.  He said I was a good shot… :-)  The background story on this is here. 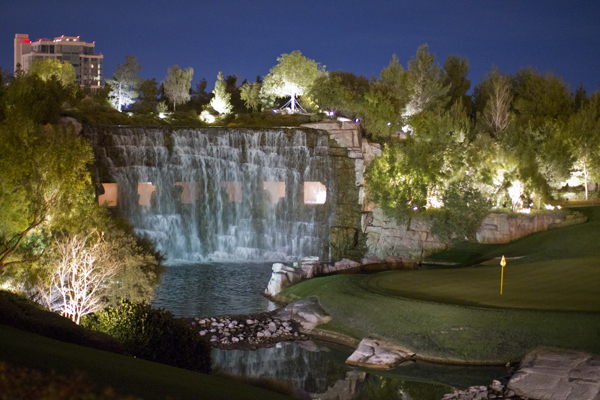 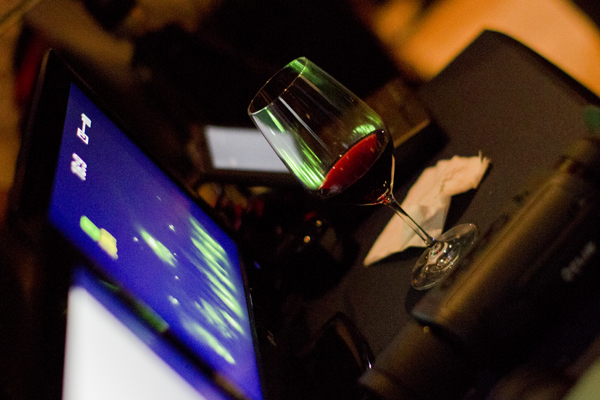 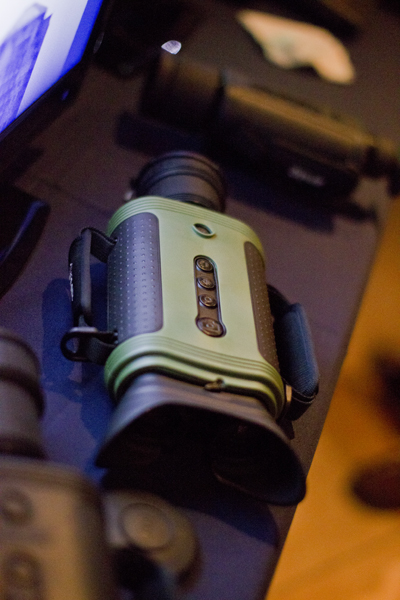 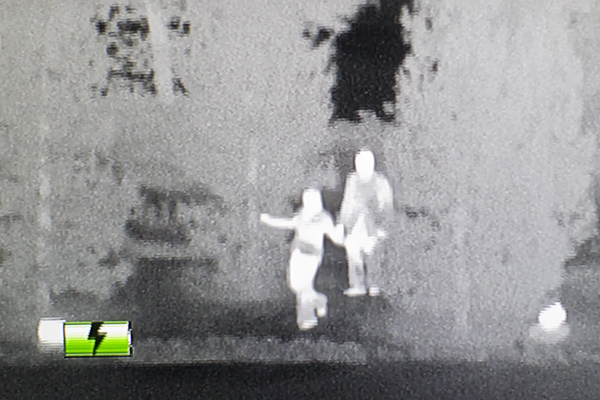 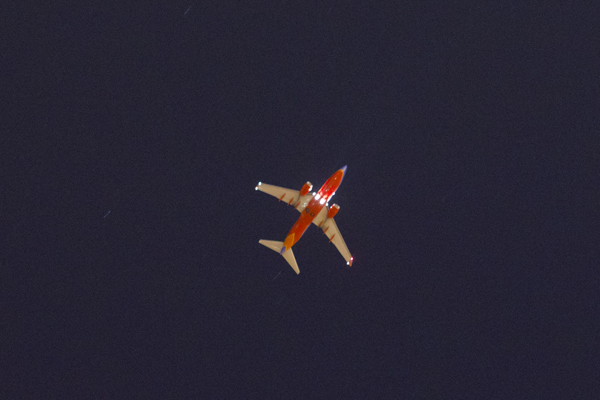 After a long day, “Steve” and I met up with representatives from FLIR who treated us to a rather lovely dinner at the Wynn Country Club where we were able to talk about low light and heat mediated imaging with some of their new products.  I had a wonderful conversation with one of their senior engineers, Austin Richards who also knew a bit about vision making the event a bit more fun for me.  Austin has written a book about sensing and perception in the electromagnetic spectrum called Alien Vision.  It was a great meal with excellent conversation. 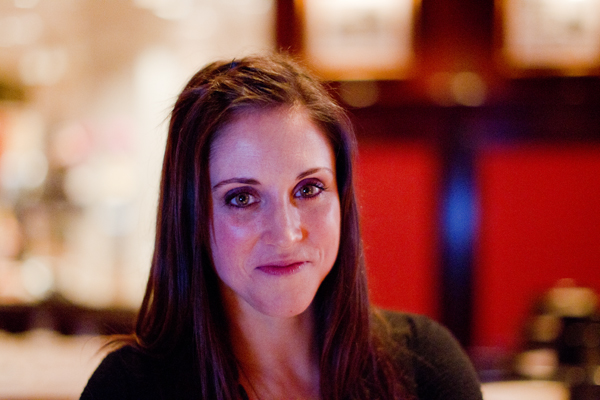 My thanks to Haley for making the visit with FLIR possible.