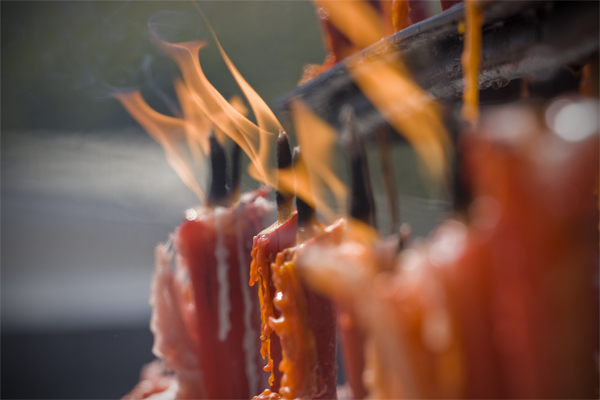 After a couple days of science, held at the Hongzhushan Hotel, we had an outing to see some of the sites in Emishan, China. First thing in the morning, all one hundred some odd scientists piled onto tour busses to take a tour of Emishan mountain, a UNESCO World Heritage Site and one of the four sacred Buddhist mountains in China. 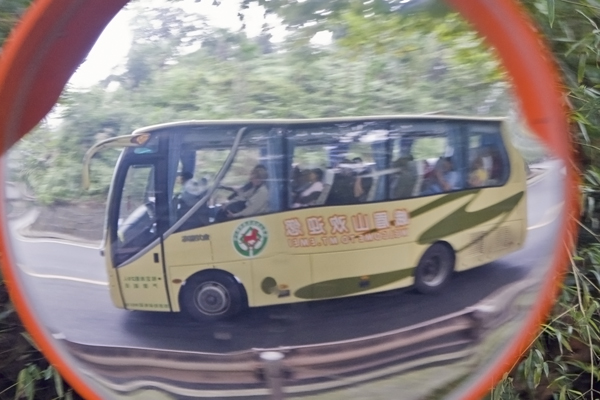 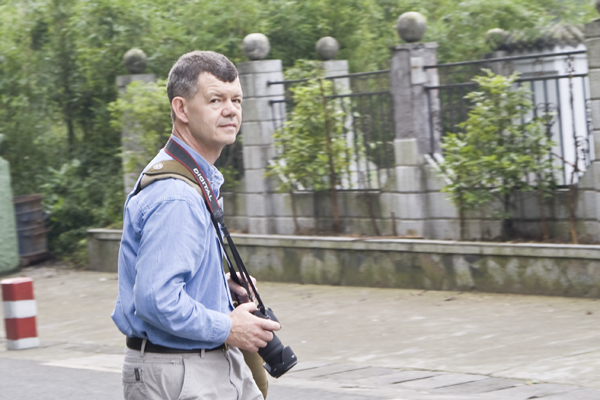 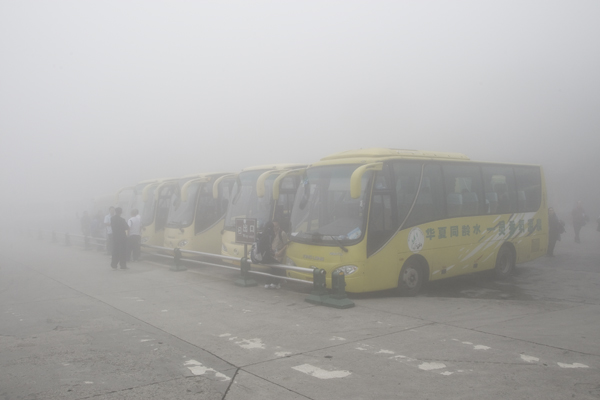 The tour busses we took were a bit more cramped than the busses that took us from Chengdu to the hotel here in Emishan, but we all bundled in and took off on a trip to the top of the mountain. The busses stopped at a mid point on the way up, where we stopped off for a break, then hike up to a tram that would take us the rest of the way towards the top. Overall, the total hike up the mountain is said to take about three days, though I figured it could easily be done in less than two at the speed I typically hike at. However, the goal with this area is to spend time or stay overnight in the various monasteries and treat the trip as more of a pilgrimage rather than simply making it to the top. Interestingly, the busses we took used water-cooled brakes that initially had me concerned as steam/smoke was poring out of the wheel wells when we stopped off at a station ostensibly to fill up our brake water reservoir, but also quite obviously to spend some money at the little market with the water hoses. Of course when I figured out that we did in fact have water cooled brakes, stopping for water was a decision I fully supported as climbing and descending Mt. Emei involves rather steep grades. I made a note to look into just how these brakes function as soon as a little extra time can be found back home. 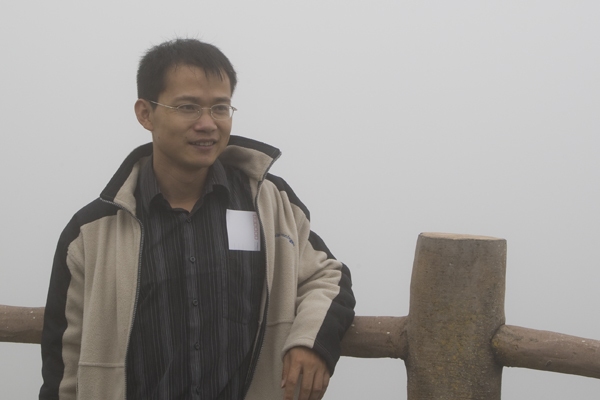 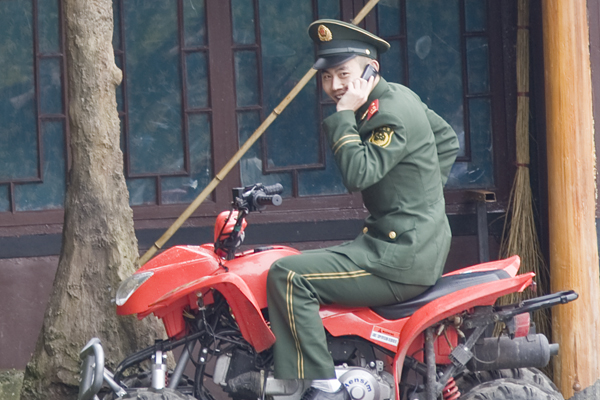 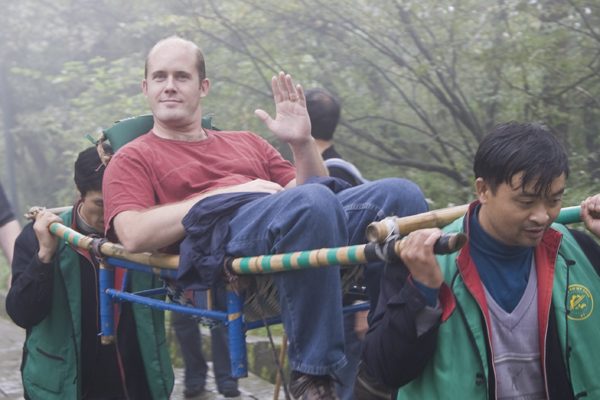 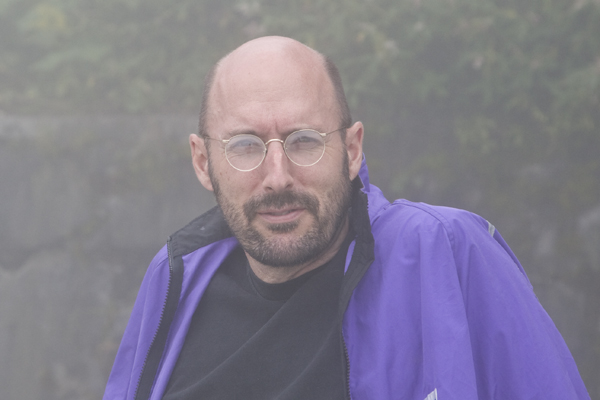 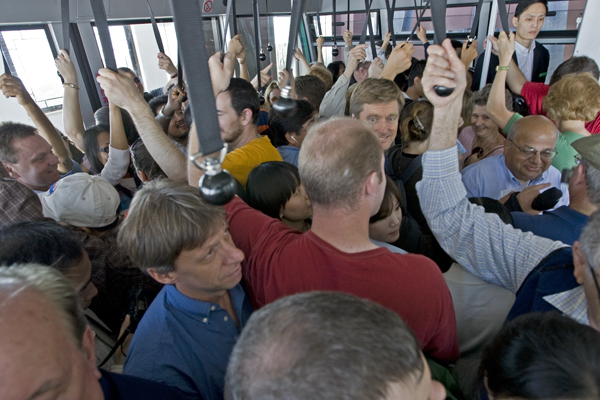 The little climb up to the tram which would take us most of the way up, but it was good to stretch the legs some after sitting in meetings for two days. At least one of our party, Joe Carroll, took advantage of porters who carried him up, royal style to the tram. You can see him in the image above saying “this is how I roll”. After arriving at an intermediate point, there was a little climb up to an Austrian made tram that we were crammed like sardines into which would take us the rest of the way up. Of course having been sitting in the airplane followed by a couple of days sitting in meetings, I was overjoyed to be able to stretch my legs some, even if it was to pack into a tram and negotiate hoards of people on the way up to the top. 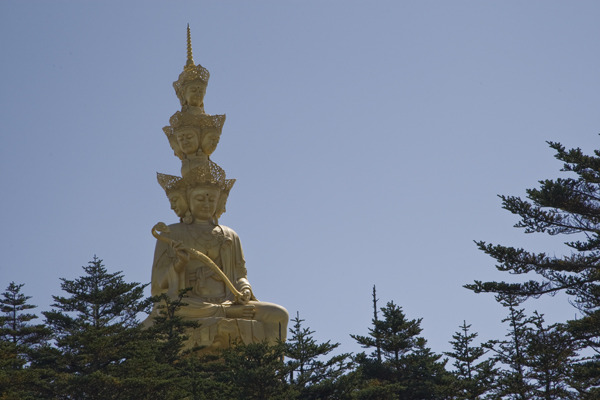 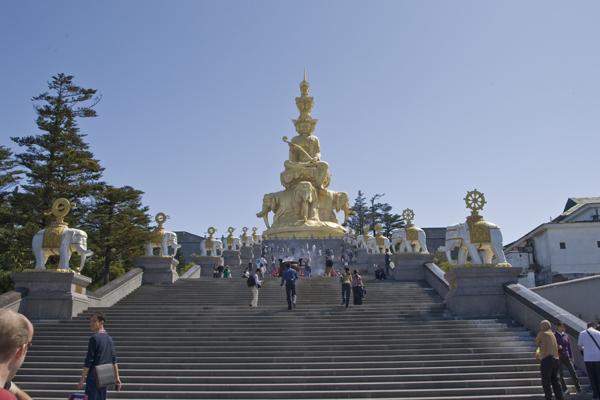 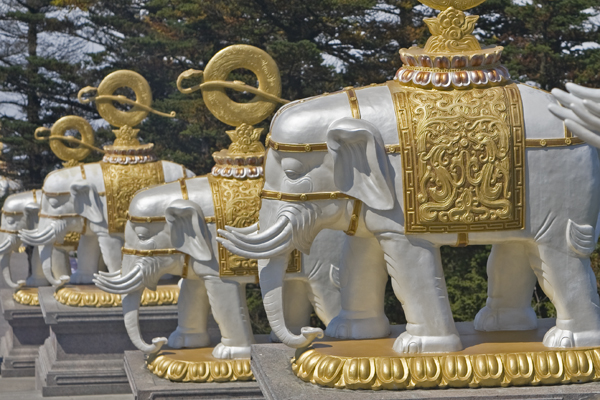 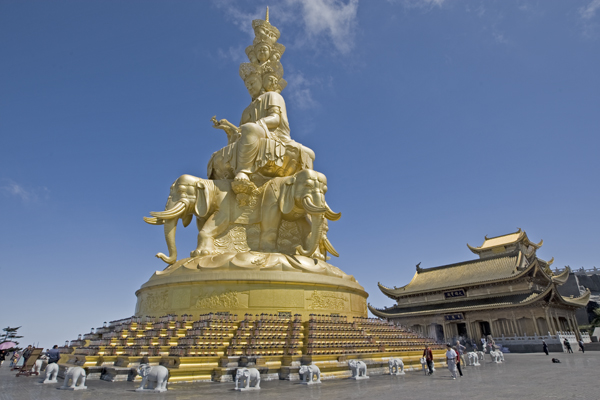 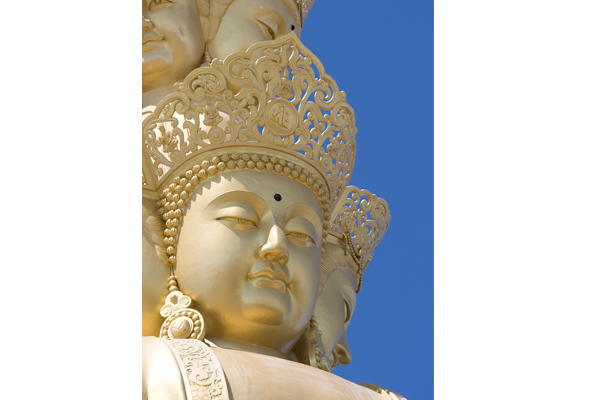 The tram trip to the top delivered us up through the clouds, mist and pollution, near the top of the mountain at 13,000 feet to see the first sun in days. It was absolutely wonderful to see the sun, hike and walk around a beautiful temple complex at the top of the mountain. Walking out of the tram, you can see some amazing vistas over the valleys surrounding Mt. Emei and looking up the mountain through the trees reveals a huge, golden statue in the temple complex at the top. I laughed to myself as just about everyone who walked out of the tram building closed their eyes and held their faces to the sun. None of us had seen the sun in days and most had anticipated cold, we weather. I had packed for cold weather with a jacket and polar fleece, but did not need any of it as the weather was so warm and wonderful, a complete contrast to what it felt like underneath.

As one walks up to the giant statue of Samantabhadra, you can see the head from below while you walk up the stairs between columns of elephants. Eventually, you reach the top of the temple complex where you can see Samantabhadra seated on elephants in front of the Golden Temple. 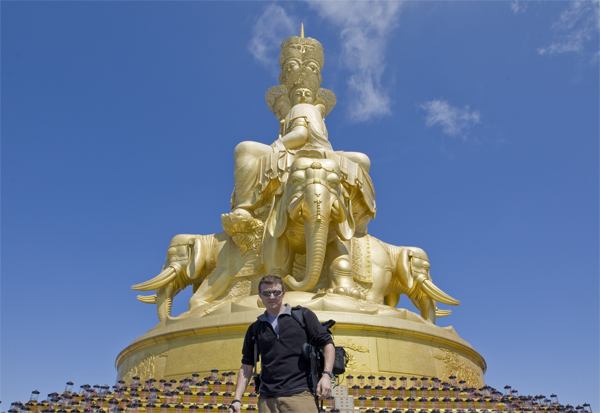 There is another photo of me showing off a t-shirt and doing a little Chinese evangelism for a very cool search company, Lijit available on the web on Tara’s site here. 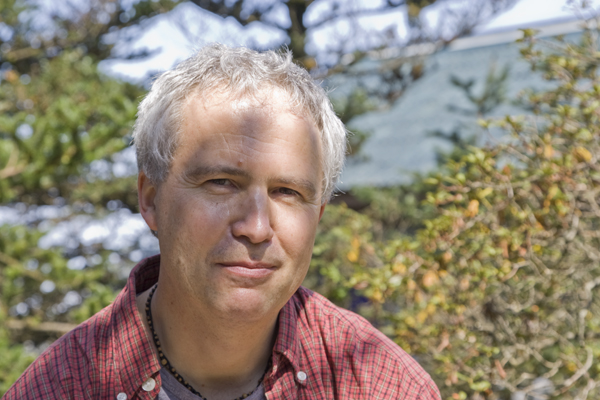 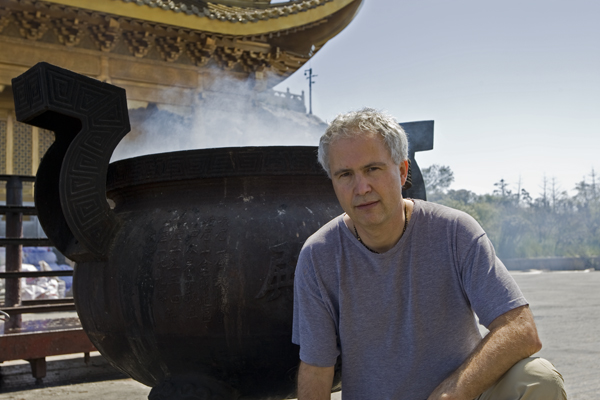 David Krizaj was very excited about this trip and is planning on spending four or five days after the meetings hiking around Mt. Emei and staying in the monasteries at night. I wished that there was some way to carve out time enough to join him, but prior commitments have me in Seoul two days after the end of our meeting here. 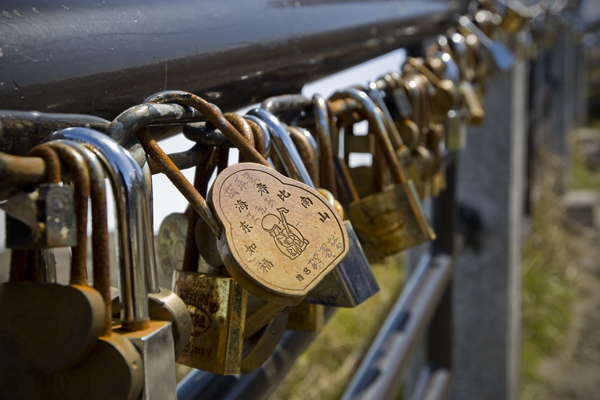 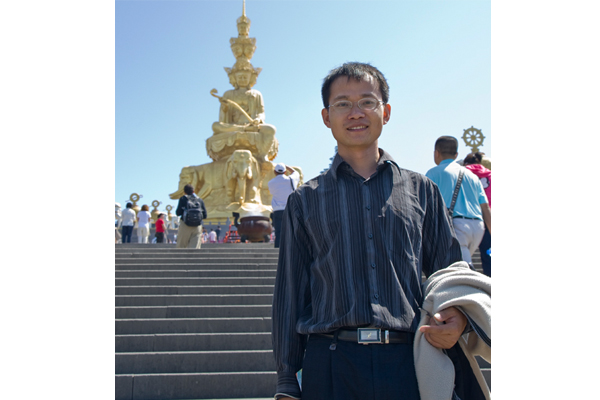 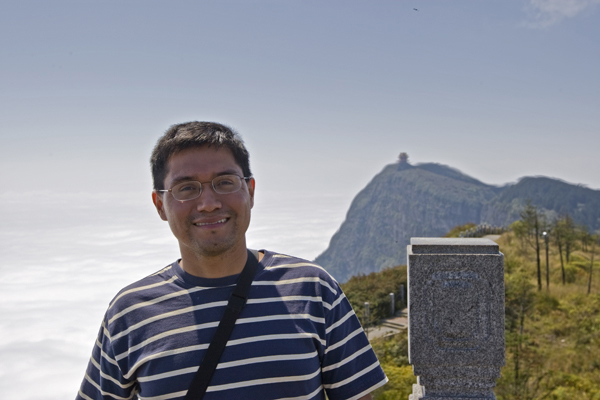 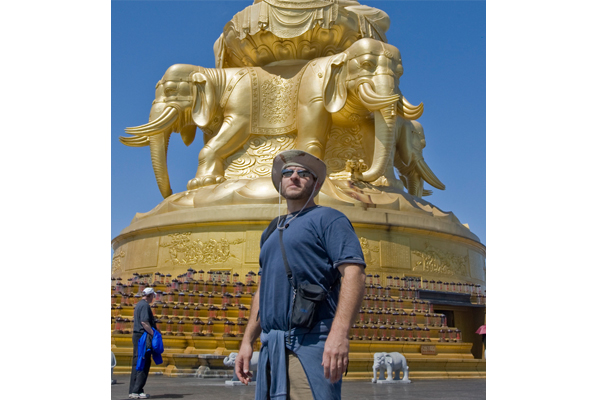 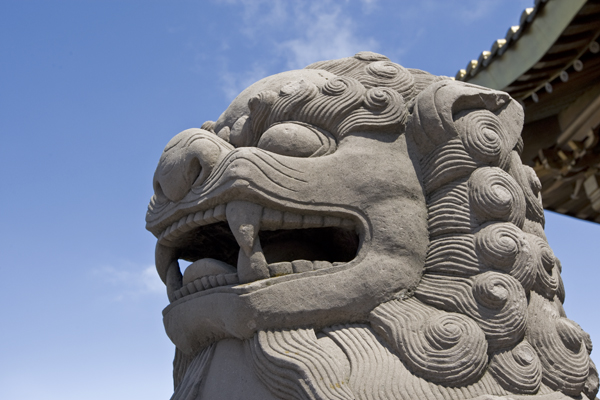 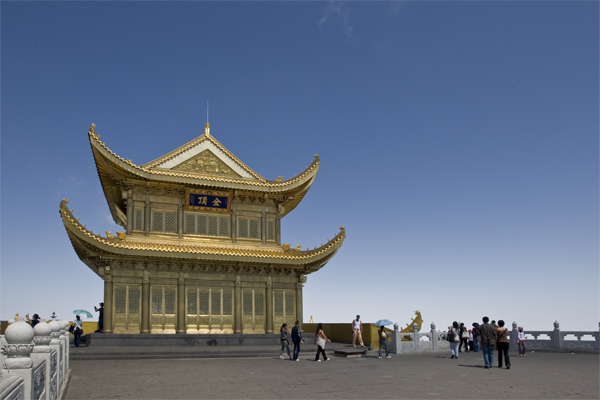 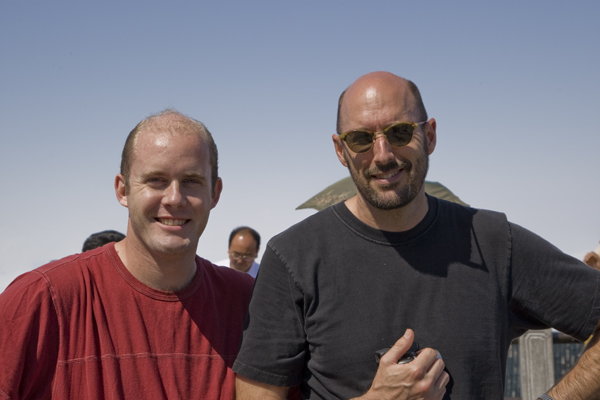 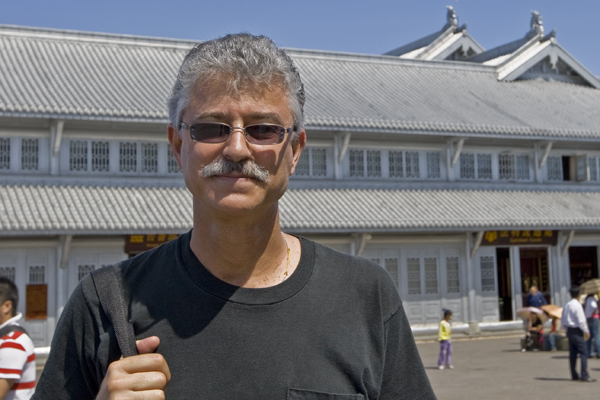 We spent some time walking around at the top of the mountain, looking at amazing vistas and the cloud oceans below us before reluctantly walking back down the mountain to the tram only to descend once again into the murk. But while it lasted, seeing the sun, the temples and some amazing vistas were truly wonderful and many of us were able to capture pictures of the event to take home with us. 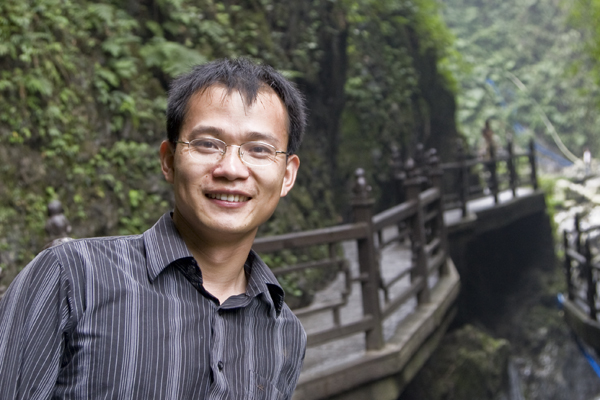 On the way back down the mountain we stopped by for lunch followed by a quick walk out to see some monkeys where I snapped this shot of Yanhua.