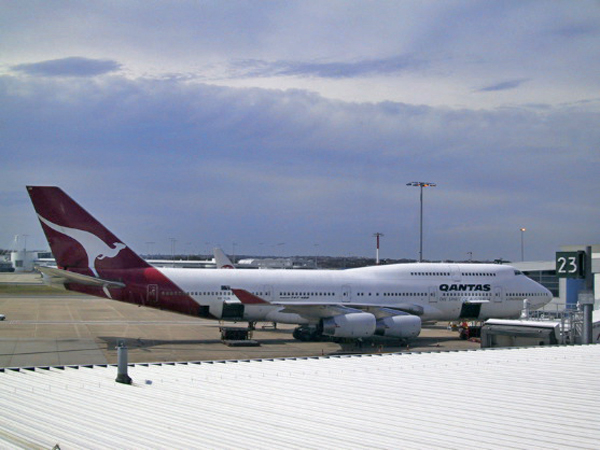 I love Qantas, but wow, this flight was one of the most taxing I have ever taken. It was most certainly not the fault of the airline however.

Let me back up a couple of days. After a pleasant breakfast and early morning walk around downtown Sydney, I left the hotel late in the afternoon and headed to the airport hoping to have the same kind of flight home that I had out of LAX to AKL which was a wonderful flight. This flight however was marred by two extremely drunk/stoned individuals who were also quite obviously doing ecstasy or MDMA. These two E-heads were all over the place, hyper affectionate and smelly. I first saw them in the gate area before we boarded the plane and made every effort to find a little corner where I could plug in my Powerbook and get some work done. Of course you can see the setup… I board the plane and sure enough…these two come walking back and sit in the row directly in front of me. Arrrrrrrrrgh! I made the effort to keep to myself and get some work done on the flight, but these guys made it absolutely impossible and were the most irritating travel neighbors possible. So much so that the two guys to my left were really starting to get irritated as well. The two passengers to my left were these Irish bruisers whose biceps were as big as my thigh and they were not very appreciative of our stoned E-head neighbors in front of us. At this point the flight was only an hour old.

The three of us decided to cut the tension with a little alcohol in the hopes of calming down which worked initially, and gave the two Irish dudes a chance to flirt with our admittedly cute stewardess. The problem of course is that the two E-heads in front of us were now mixing alcohol with MDMA. Damn….. You know when people say that things cannot get any worse? Well, there is a saying in certain parts of the world that essentially states that “Things can ALWAYS get worse”. Well, when these two started drinking, it got worse. They were dropping stuff over the back of the seats onto my Powerbook, grabbing the headrests with their hands, thus covering up my video screen, squirming and bouncing around in their seats and generally causing mayhem. Twice, I had to physically remove the hands of the guy immediately in front of me from my seat rest display.

So, about four hours into the flight, when the three of us in my row had decided the two ecstasy addled stoners had enough alcohol, we simply informed the stewardess that they will be having no more. They were done. She understood and started walking away at which point one of the E-heads physically grabbed the stewardess and demanded more alcohol! This physical aggression induced my Irish friends to jump out of their seats and lunge for the two E-heads with me in-between, physically restraining the four of them. “Great” I thought, “a fist fight at 30,000 feet over the Pacific Ocean”. I managed to get everybody calmed down to the point where we could sit back down, but the three of us wanted desperately to move away from these two. We summoned the head stewardess and offered her the combined sum of money in our cumulative possession ($1400 US) to MOVE US to some other place on the plane for the remainder of the flight. Being the professional Qantas employee, she had already checked for availability and it was an absolutely full flight. Even first class was full. She then asked to speak with me privately and informed me that she would be notifying the authorities upon our arrival in Los Angeles. She also asked me what kinds of drugs I thought they were on. I told her that I thought it was ecstasy, but I was not sure. She thanked me for my patience at which point she looked for all the world like it was the worst day of her career.

Eventually, about 9 hours into the flight, the two E-heads finally fell asleep, and even though I was trashed, there was no way I was falling asleep. I managed to stay awake for the entire 12 hour flight and welcomed our arrival in Los Angeles. Curiously though, there was nobody at the ramp to meet our two problems and I thought that the flight crew had forgotten all about it. My worries however were allayed when we were going through customs. Two DEA agents were waiting on the other side and caught my eye. They nodded and then saw their quarry at which point they quickly escorted our two problems into a side room. About 30 seconds later, a cute little DEA beagle trotted into the room, walked right up to their luggage and sat down, signaling a drug find.

At this point, all I want to do is board my flight from LAX to SLC and fall asleep for the one hour flight. So, I board the plane and a nice older couple come to sit down next to me. Perfect I thought… At which point we introduce ourselves and the woman starts asking me ALL sorts of questions! Some getting downright personal, such as asking about political preference and such. I tried deflecting some of the questions until it became impossible. She obviously had an agenda and she wanted to know who I would be voting for in the upcoming election. I politely informed her that it was a personal question and I would rather not discuss it. Ignoring my plea, she persisted and started lecturing me about stem cells and how all stem cell research is bad…. Now, those of you who know me understand that I am a bioscientist and I simply could abide by this assault. We talked for almost an hour about stem cells. I educated them about the issues, even informing her that her husbands Parkinson’s Disease (she was surprised I could tell) was one of the hottest areas of stem cell research. I informed her that all stem cell research was not bad and that in fact, most of it was entirely compatible with her religious beliefs. We talked for quite some time and I was feeling pretty good about it as her husband was visibly moved by the educational experience. We landed in SLC at which point she thanked me for the talk and informed me that she would not be changing her vote. Mark my words, single issue voters are going to cause problems for this country.

At this point I had been awake for almost 32 hours I was simply too tired to care at that point and just wanted to see my wife, give her a kiss and fall asleep at the earliest convenience. Which, is exactly what I did, sleeping for a full twelve hours and awaking ready to head back to the lab.