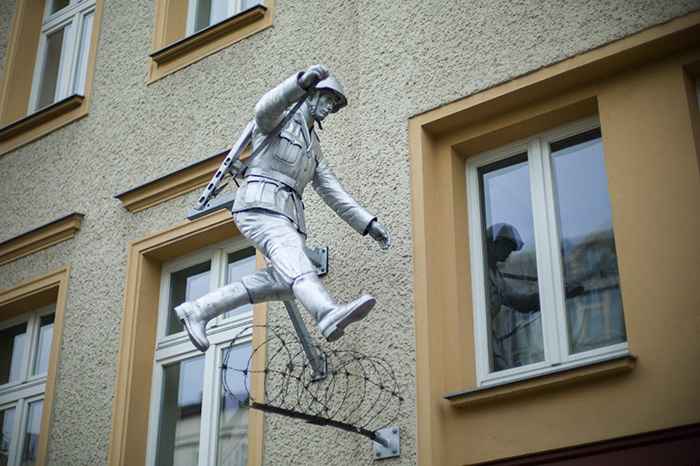 Recently, I had the chance to visit with my friends Duncan and Katerina in Berlin, give a talk and get a little work accomplished.  In contrast to most trips like this, I had a little time available to visit with these wonderful people and simply walk around Berlin, one of my most favorite cities on planet Earth.  Robert and I were here a couple of years ago and it has been amazing to see how the city has changed in just those two years.  Last time I was here, I managed to get into the former East Germany side of Berlin, but not up where my friends are living now.  Its a great part of town with so much history and Cold War intrigue. 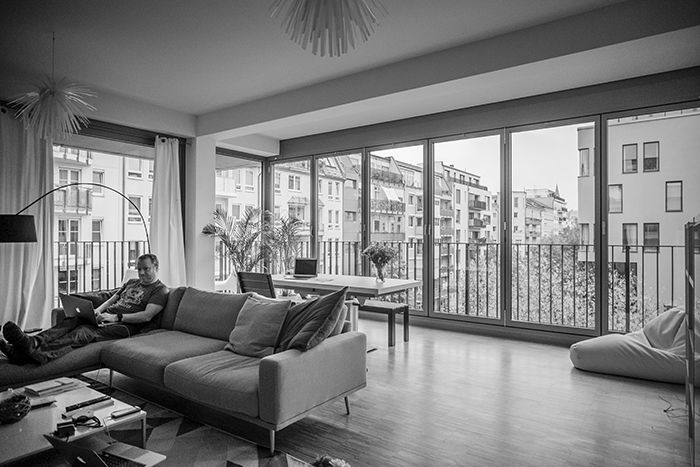 Duncan and Katerina scored a bitchin’ apartment in an exciting part of Berlin, filled with families and a great location for exploring Berlin.  Many thanks to them for hosting me in their oh, so wonderful home.  It made visiting/working/socializing so much more pleasant. 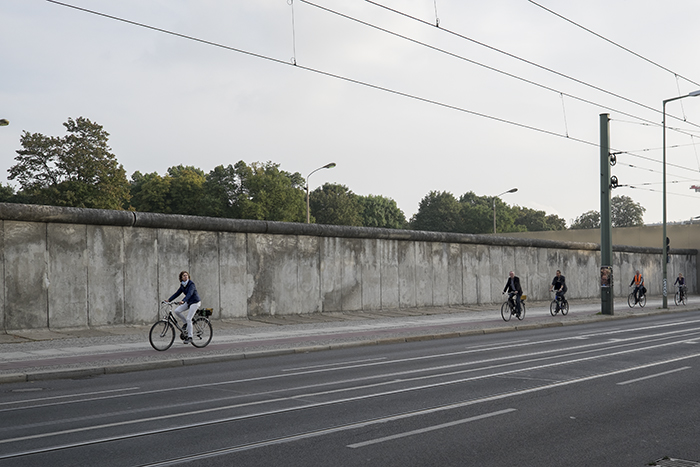 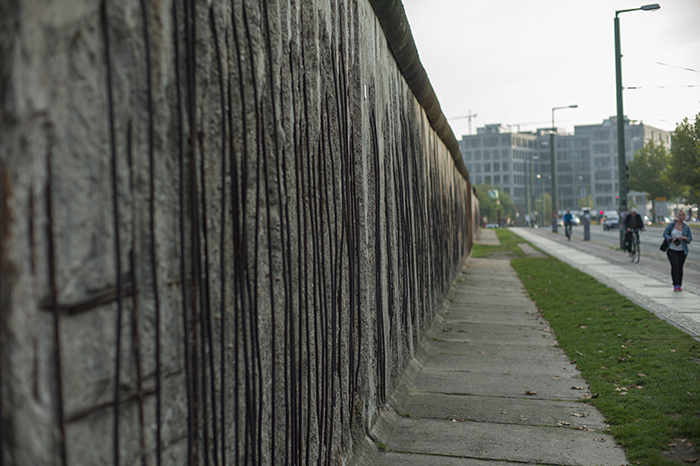 Given the proximity of the base of operations, portions of the Berlin Wall were a must visit on one of our walks through the city.  The Berlin Wall as it was, is going away… slowly, irrevocably disappearing to those who chipped off portions of The Wall for souvenirs, while other large sections are being disassembled for the inevitable progress that economic success brings with it.  Berlin *is* an exciting city now and it is driving much of Europe’s economic progress.  With that progress brings turnover of the old, into the new.  However, there are places where you can still see The Wall as it was at the height of the Cold War as a gift to future generations to remind them of what kept a city, country and world, apart. 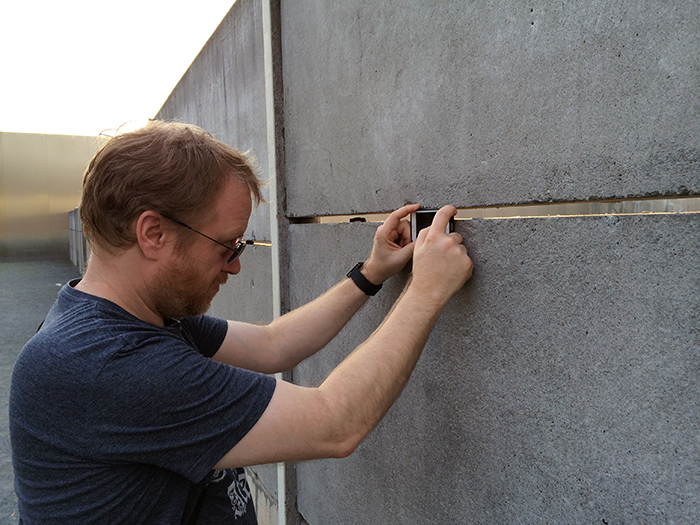 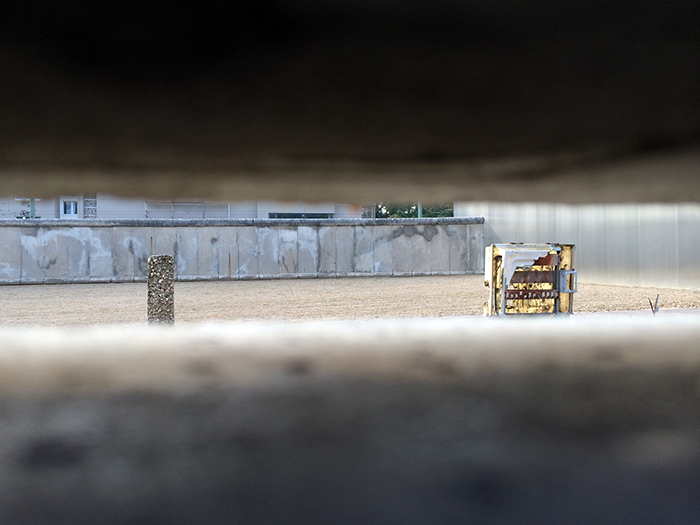 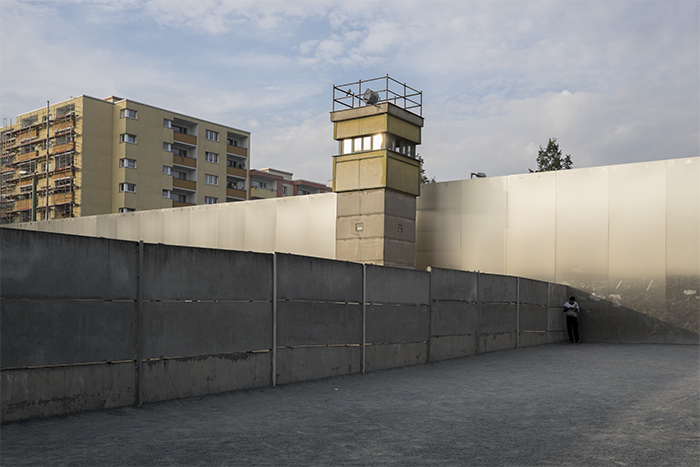 One particular area of both preservation and memorial, the Wall Museum over on Bernauer Straße and Ackerstraße maintains portions of the Berlin Wall and the “no man’s land” in-between that are being preserved for posterity.  These preserved areas are important so as to provide a direct, amazing insight into the history that divided Berlin and fundamentally, Germany. 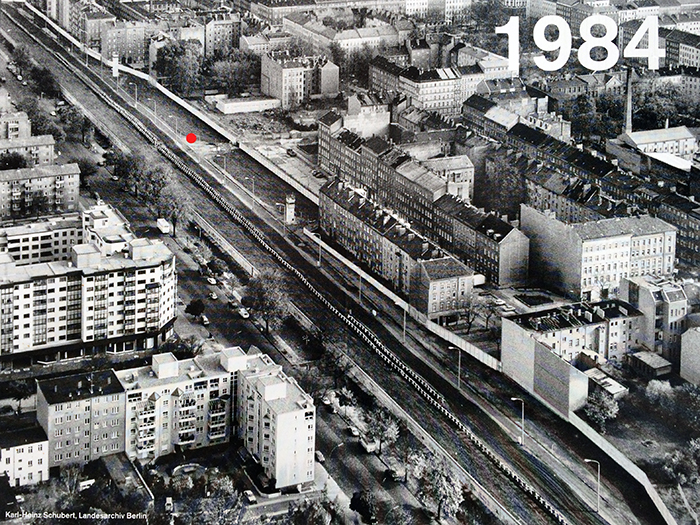 All along the former Berlin Wall, there are historical reminders and green spaces with information revealing what was to those who may not have lived it or known about the structure that so dominated a generation of Germans.  The interesting image above by Karl Heinz Schubert is an aerial view of my friend Duncan’s neighborhood as it was in 1984, complete with guarded watch towers, barbed wire and tank traps.  It is an amazing view actually that reminded us that this happened in our lifetimes.  I was 19 when the Berlin Wall came down and I remember watching it on TV with the very real sense that something momentous had happened.  Peter Jennings reported astonishing news of German authorities deciding that The Wall was now meaningless and we watched Tom Brokaw standing in front of the Brandenburg Gates, reporting while people walked along the top of the wall.

I really should have jumped on a plane and visited Berlin in 1989, but for whatever reason, I did not.  My world was much smaller then and perhaps a trip like that seemed inconceivable, but it would have been interesting for sure.  If you pine for the old days of 1989, there are many tourist shops around this part of Berlin that will sell you bits of concrete with paint on them that are supposed to be chunks of the Berlin Wall, but are just as likely bits of someone’s torn up and spray painted driveway.  I hate to be that cynical but… 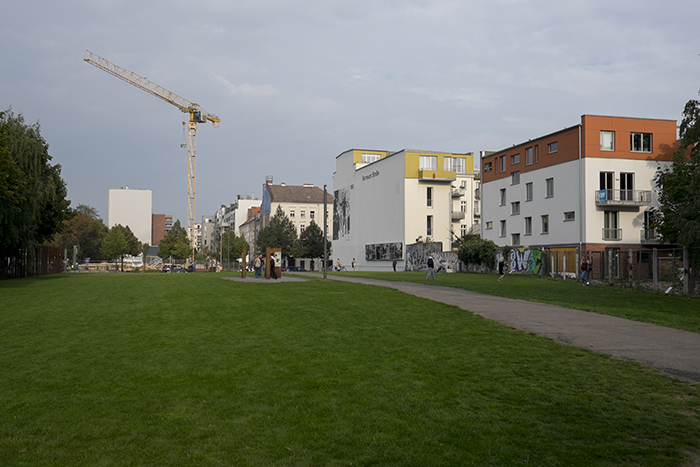 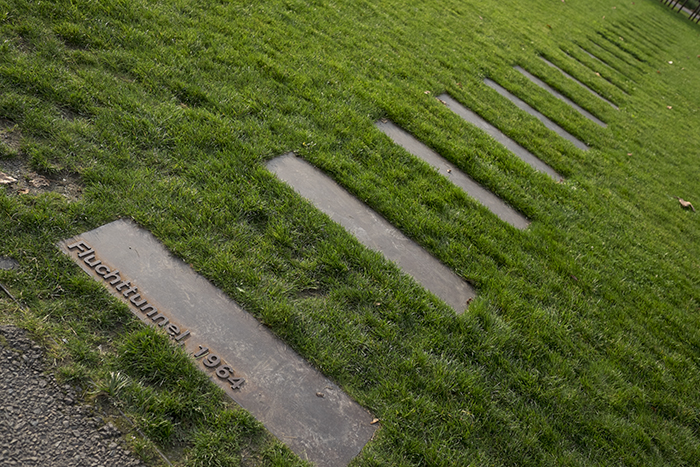 Now, things are very different And here is that same stretch of land in the photograph above is seen today, morphed into a green space with historical markers denoting what was once here, including metal markers in the ground showing escape tunnels that were dug by those attempting to flee Communist Germany to the West.  Other tunnels were dug by the Stasi to get their agents secretly into the East undetected or to smuggle goods into East Germany for the black market among other applications. 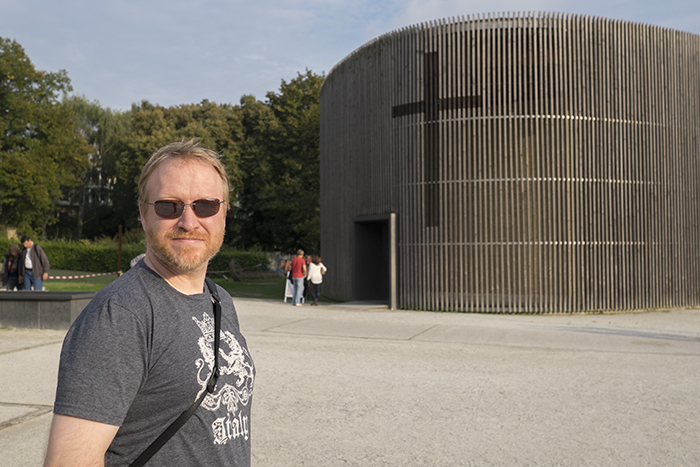 The original Church of Reconciliation or Kapelle der Versöhnung was destroyed in 1985 “to increase the security, order and cleanliness on the state border with West Berlin’ according to the official justification by the GDR (German Democratic Republic) government” only four years before the fall of the Berlin Wall. 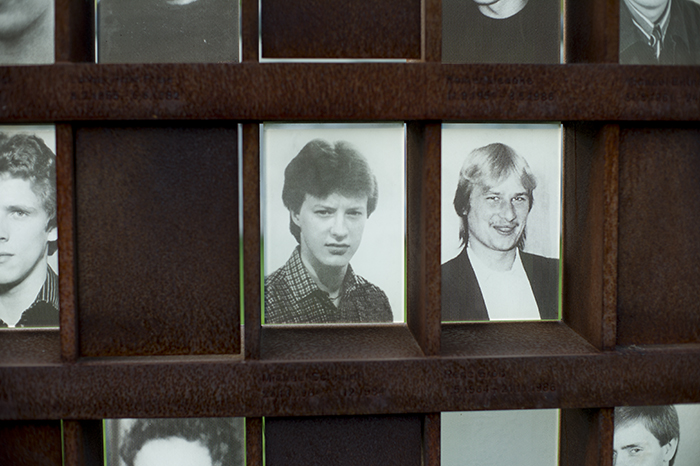 There is also a phenomenal memorial to those who lost their lives trying to cross the Berlin Wall.  The memorial itself is a window of remembrance of sorts in metal with glass images that illuminate portraits of the fallen. 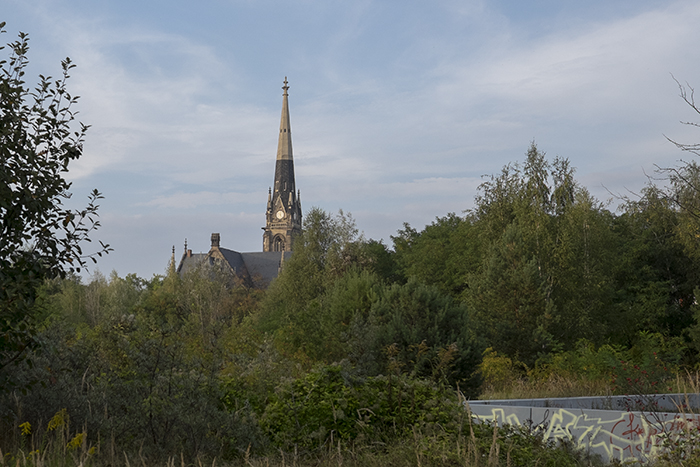 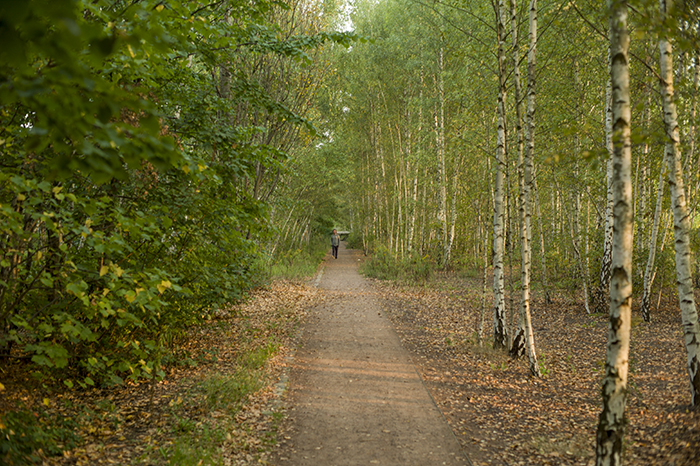 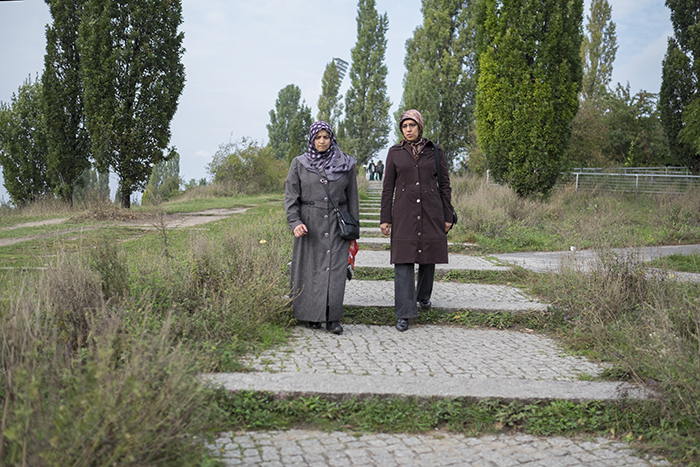 Public green spaces are necessary for any society.  The interesting thing about many of these green spaces in Berlin is that they are either in the former demilitarized zone between what was East and West Germany or are spaces that were underutilized.  For a city such as Berlin, this seems inconceivable to me on some level.  Berlin was supposedly founded in 1237 or something like that so like any old city, if you scratch the surface just a little bit, there is certainly some history buried underneath.  For someplace like the Mauerpark, one wonders what was under all the paving stones and greenery.  Clearly there is some structure there in the hills and low lying areas and it turns out that these areas were formerly rail yards, followed by death strips or no mans lands separating East and West Berlin. 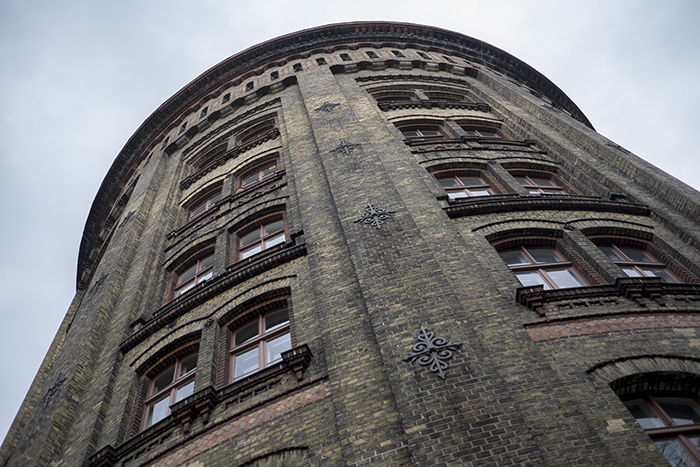 One of the most interesting buildings Duncan and I ran across was the Wasserturm Prenzlauer Berg or water tower apartments.  I really wanted to get inside this building, but alas, it did not happen.  Its hard to imagine a cooler apartment in Berlin than in this former water tower. 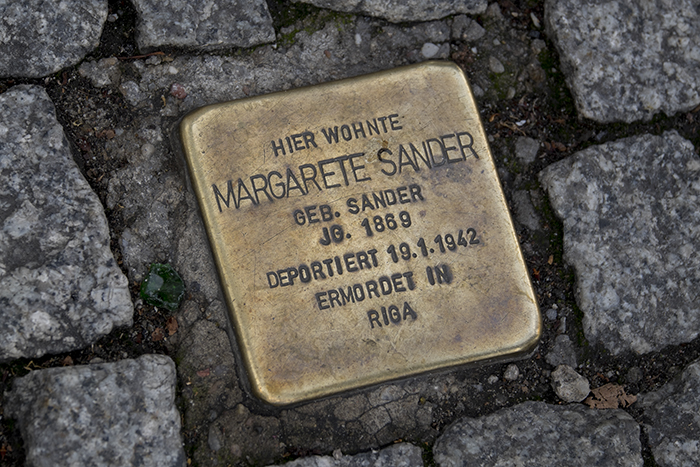 One of the things that grabbed my attention were the Stolperstein or “stumbling blocks” which are monuments created by Gunter Demnig, commemorating victims of The Holocaust.  They are sprinkled throughout the streets of Berlin and commemorate the lives of Jews that once populated Berlin, but were deported and murdered in Nazi concentration camps.  This block notes:  Here lived Margarete Sander from 1869, deported January 1st, 1942. Murdered in Riga. 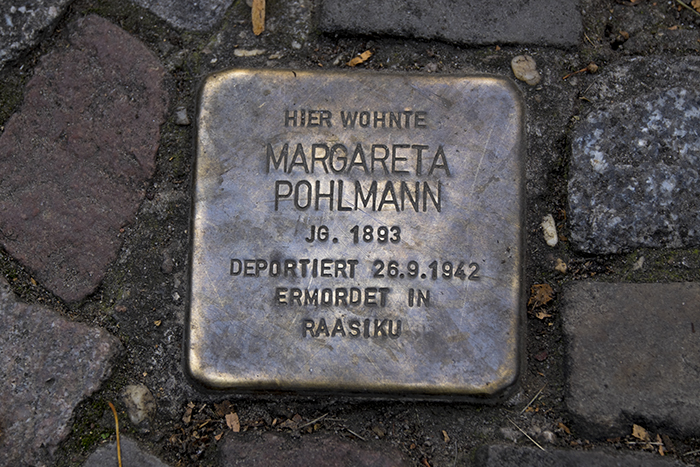 This block commemorated Margarete Pohlmann…. Here lived Margareta Pohlmann from 1893, deported September 26th, 1942. Murdered in Raasiku.  It is simple memorials like this that rock you to your foundations and bring home the reality of the Holocaust. 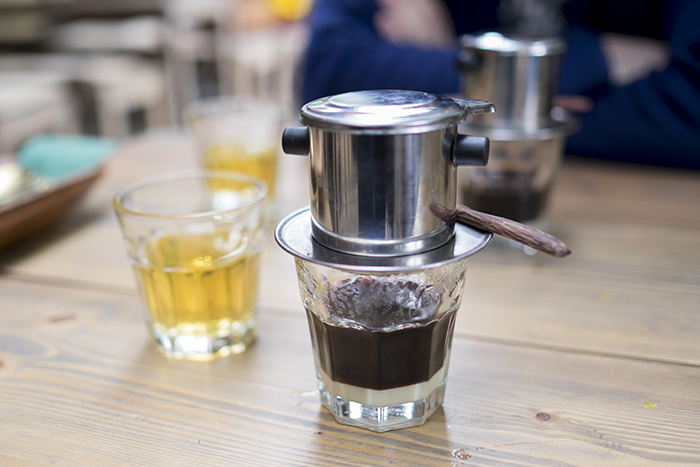 Perhaps this is a non sequitur, but this visit to Berlin was also my first introduction to Vietnamese coffee…. Thank you Duncan… Vietnamese coffee is awesome.  Do want…. Yes, do want.  If you are looking for Asian fusion, an excellent duck dish and tasty coffee in Berlin, check out Umami. 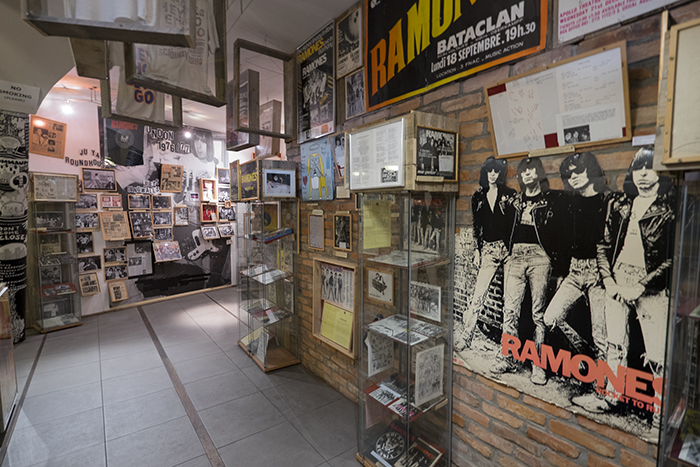 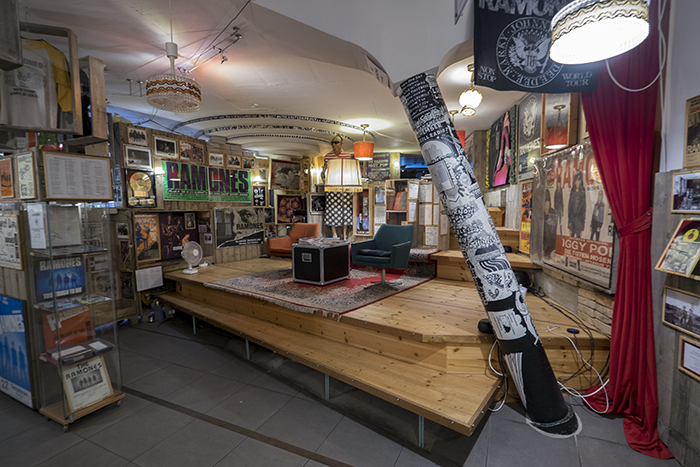 I visited The Ramones Museum again to retrieve appropriate T-shirts for H and Robert.  Any aficionado of punk rock should consider this a pilgrimage site.  Its not CBGB, but it is so cool… and you can walk around the museum with a beer. So German. 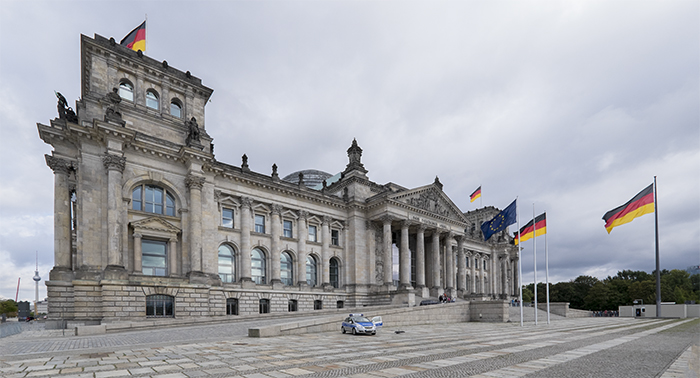 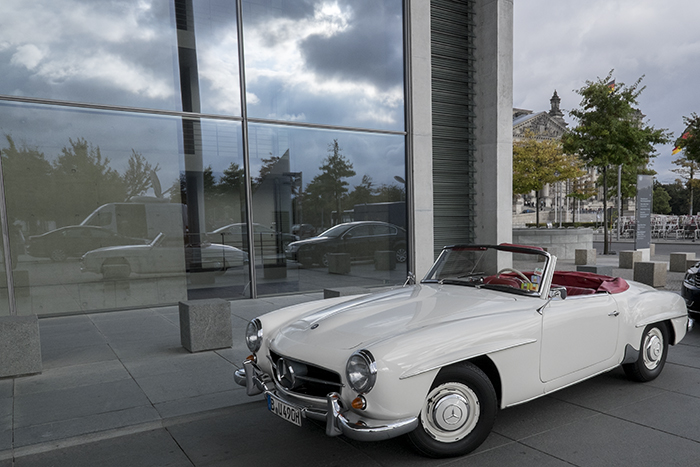 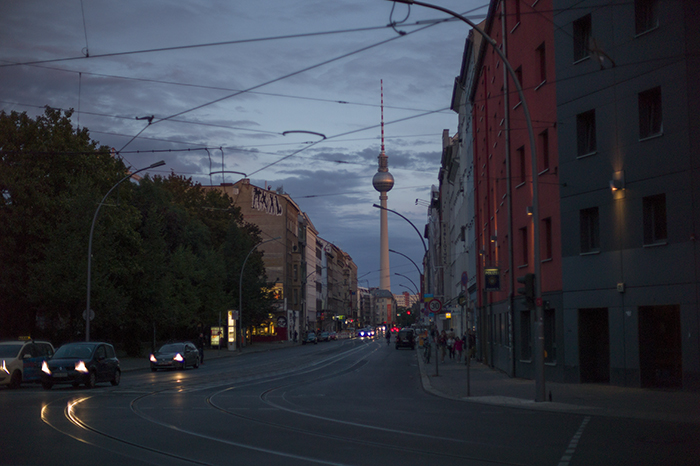 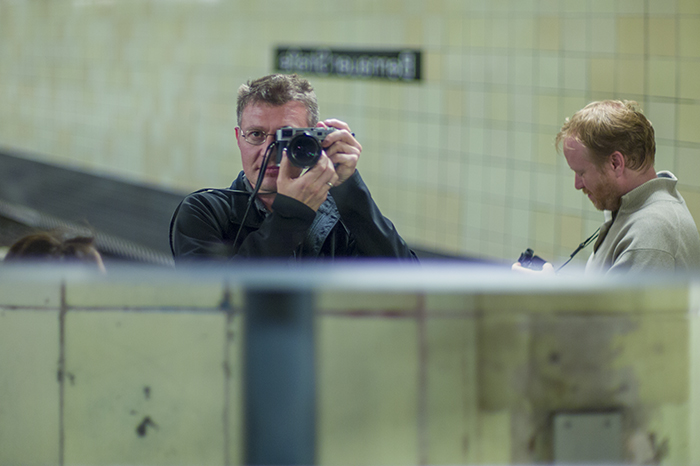 There is so much history here in Berlin.  Even though the city is changing so fast, all you have to do is walk through some of the older parts of town that were present in the 1940’s and see literal bullet holes and bomb fragmentation damage in the walls of buildings on the street.  The thought of combat in streets where people lived and worked rocks my world and explains some of the German psyche.  Berlin seems to me to feel very much like New York City.  So many stories and history layered upon layer, yet rapidly changing and morphing into the new.  It makes me wonder how an Humans of New York format would play in Berlin… 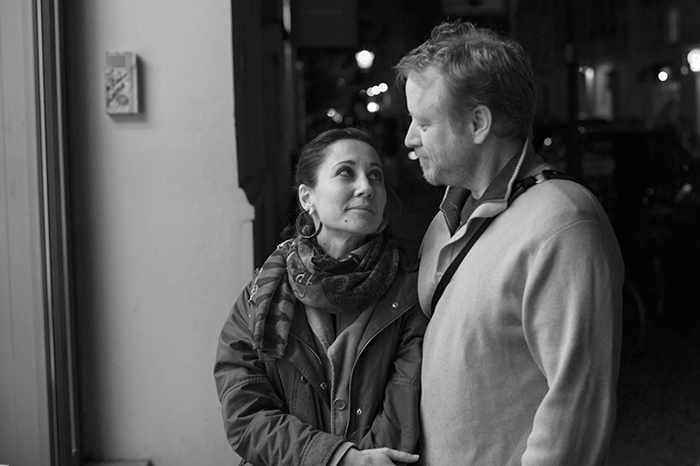 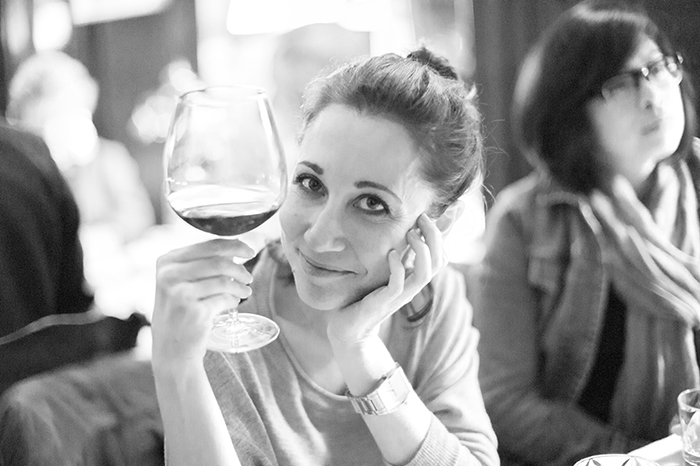 Thank you Duncan and Katerina for your friendship and hosting me.  I cannot wait to see you again soon in Greece and celebrate the new with you, family and friends. 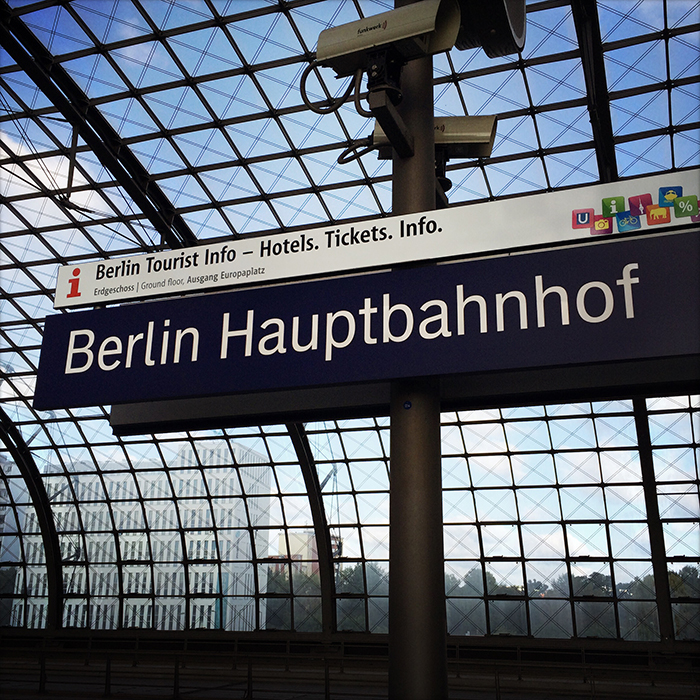 So long Berlin.  Until next time.