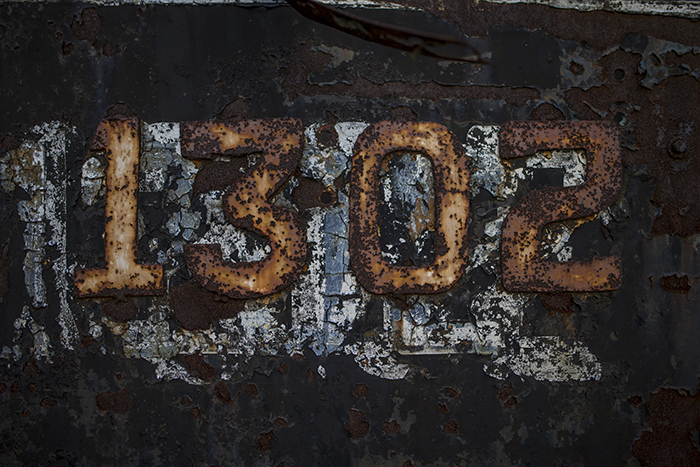 A friend of mine who works for a TLA (Three Letter Acronym) had a research project at one time designed to capture sound bites of cities and neighborhoods to see if one could cluster those sounds to create a unique spectral fingerprint that would place it geographically, anywhere in the world.  The appeal of such an algorithm is obvious, but this approach could be taken with any number of sampling approaches, not just audio.  In many cities around the world, their background feeling can be described with smells and sounds and of course visual components.  In fact, it would be a fun project to accumulate a set of visual textures to see if it were possible for others to determine where the photos were taken by virtue of their “textures”.

In Havana, those textures impart an undeniable sense of well used decay.  My friend Duncan made a post on The Texture Of Havana back in April, soon after we got back.  I had thought about it as we had been looking for textures while there, but did not think there were many photos in the archive that were “textures” per se.  However, going back through, there were a number of photographs that really had texture, color, layers and more that together are incredibly evocative and suggest a time and place in my brain, but perhaps in others as well. 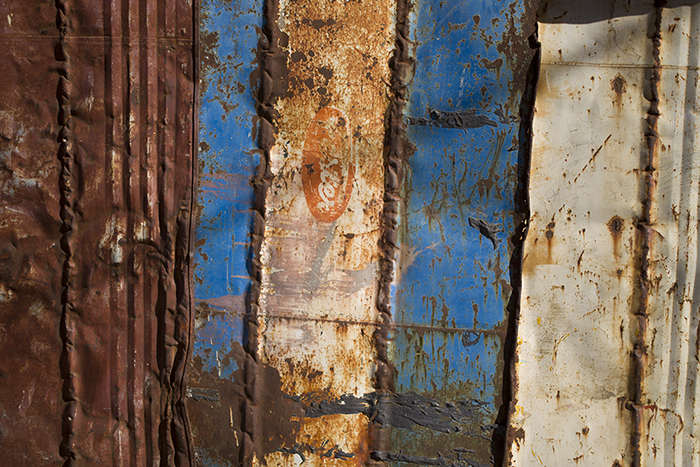 This sheet of metal welded together from multiple different sheets was on the outside wall of a taxi service that had both cars and pedicabs.  Some of the welding observed in havana is of an amazingly high quality and reflects the Cuban experience with fixing and making do with what resources they have. 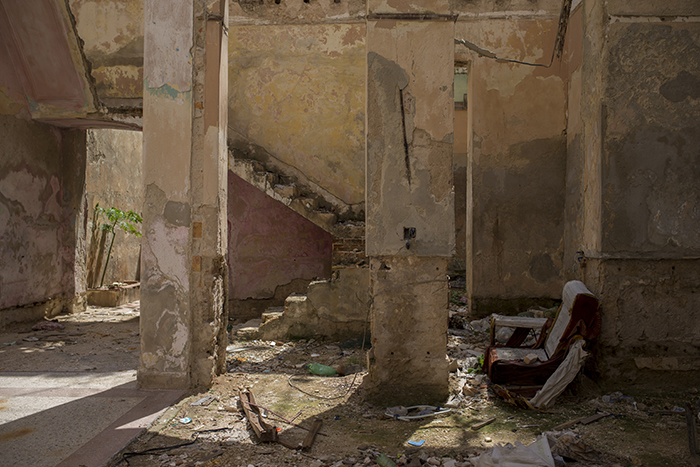 Many of the buildings in Havana are in poor states of repair and some of them resemble bombed out hulks seen in post war zone cities.  Some of the buildings that people live in are actually collapsing throughout the city as there are, for most Cubans no means to obtain materials to properly maintain these buildings. 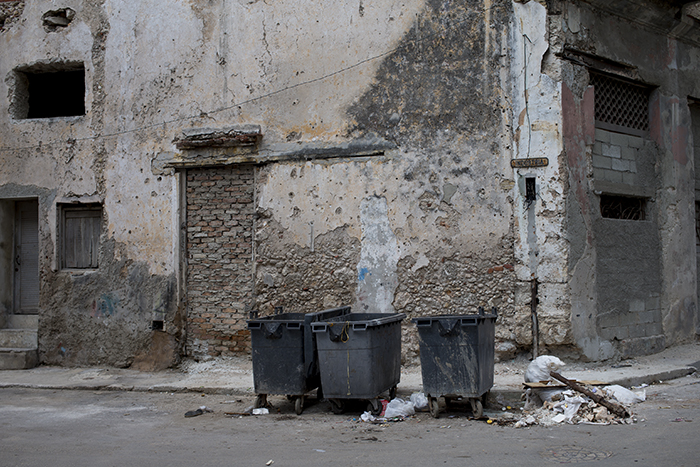 This image is just one corner out of many hundreds in central Havana and typical of the neighborhoods.  Some buildings are abandoned, others in poor repair and sanitation like many aspects of life in Cuba, is stuck 50 years in the past.  It does make one grateful for 1st world sanitation, water and sewage. 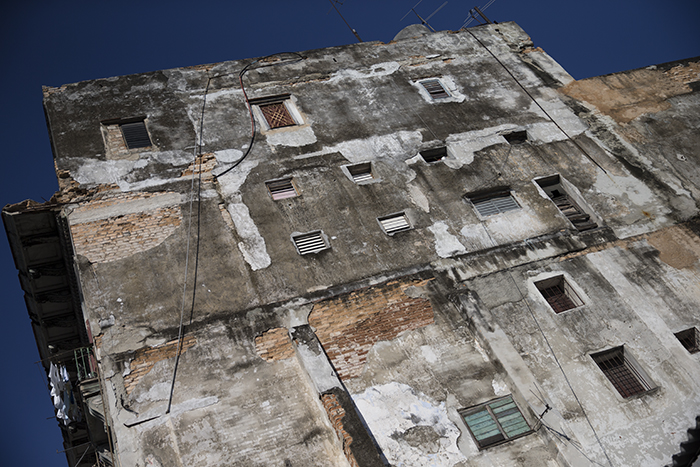 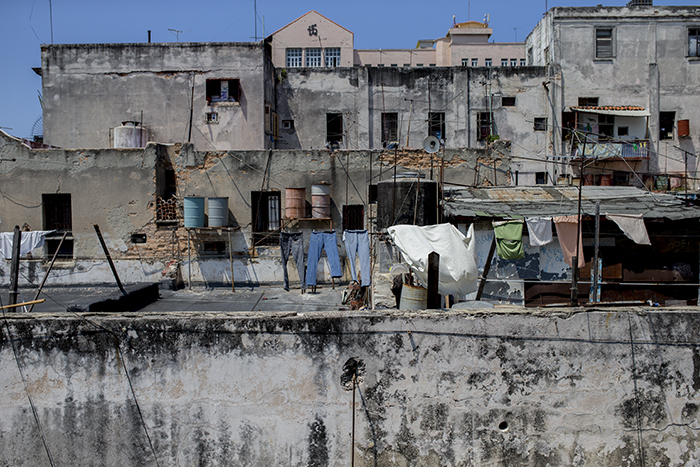 You can see where some buildings have come and gone over time, with empty lots packed right next to existing buildings.  Everything is a patchwork in Cuba with insufficient resources to completely resurface any repairs or damage, so the resulting appearance is one of quilted patches

Its also interesting to see the innovation that many Cubans have taken with their homes by reclaiming 55 gallon drums to serve as water storage as existing plumbing infrastructure does not supply enough water or pressure. 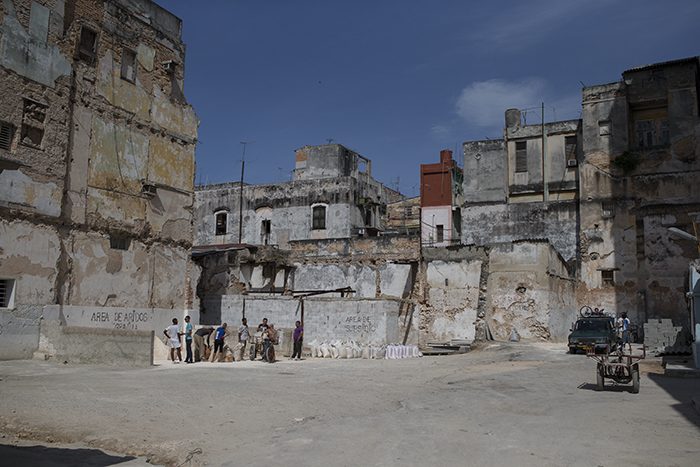 In one empty lot we stopped by, it appeared that they were selling gravel and basic building supplies, like scavenged bricks.  I presume that much of this is reclaimed from other buildings. 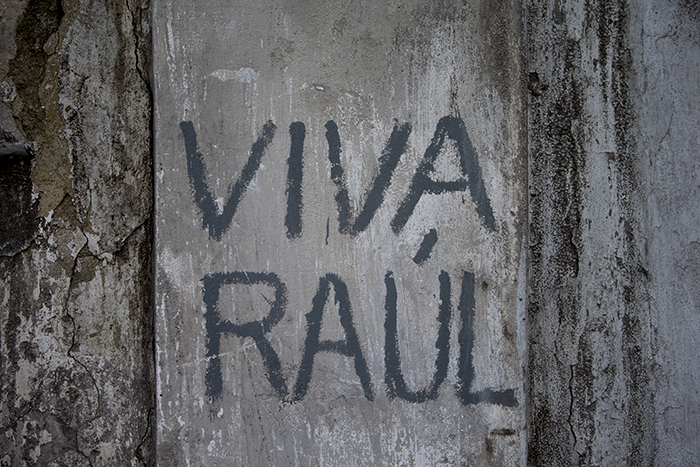 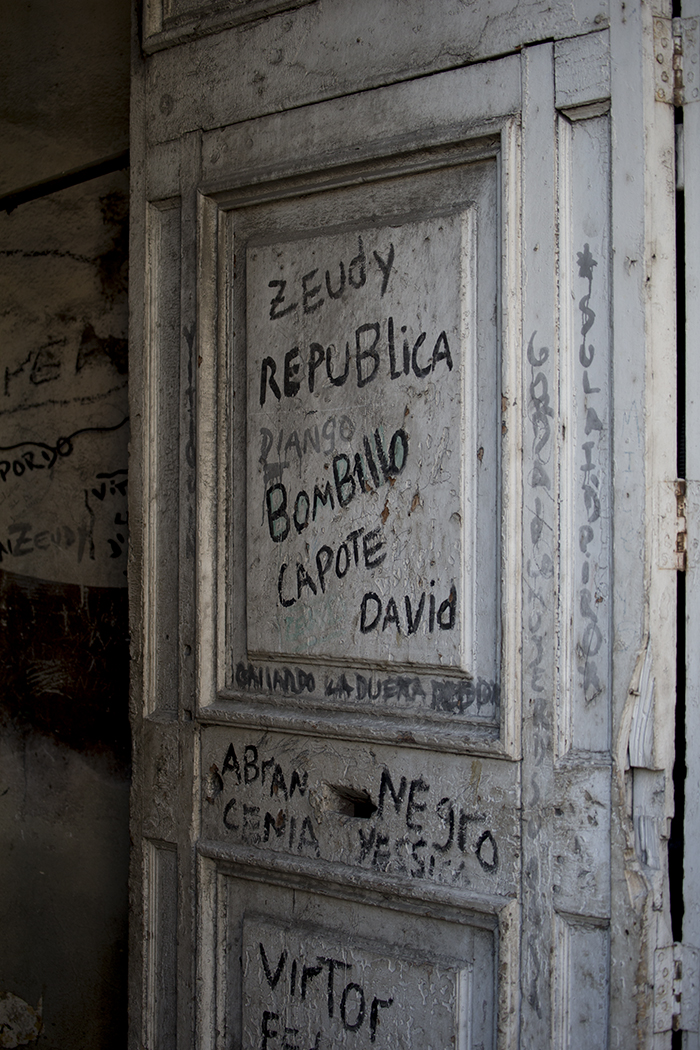 We were trying to get a feel for what some of the writing on buildings and streets were all about.  Certainly, some of it is populist graffiti that supports national propaganda, but others *I think* were names of individuals that live in certain buildings and houses. 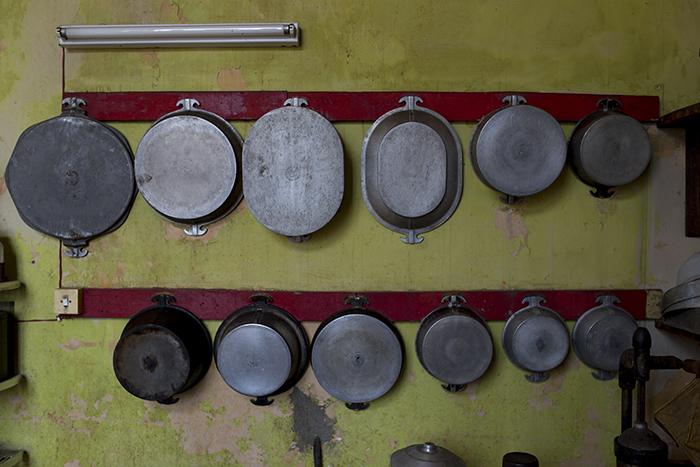 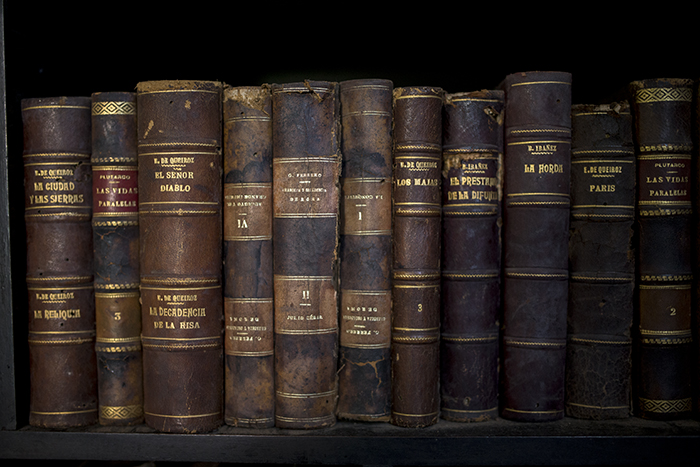 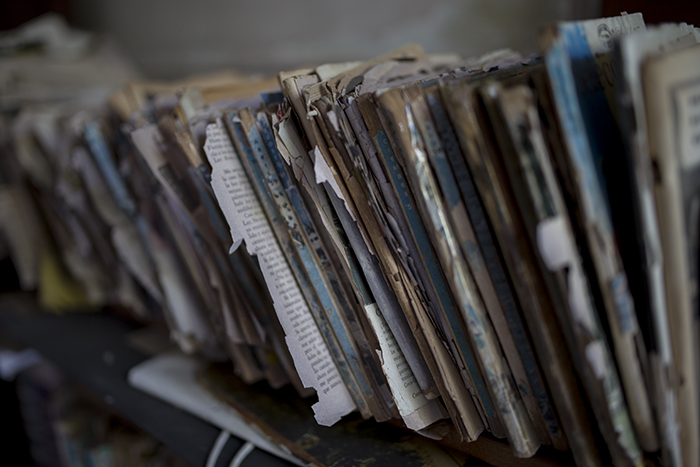 Inside the homes, many things are equally well used and old.  Yet there was something compelling about the colors, textures and organization.  Don’t get me wrong, everything is clean inside homes… Cleaner than many homes in 1st world, developed countries, but its just seen 60 years of use with minimal abilities to maintain due to lack of resources.  We had the opportunity to visit one of the older, more stately homes in Havana which was an amazing place.  The owner called it her “Falling Down House” as she could not obtain enough materials to keep it in good repair. 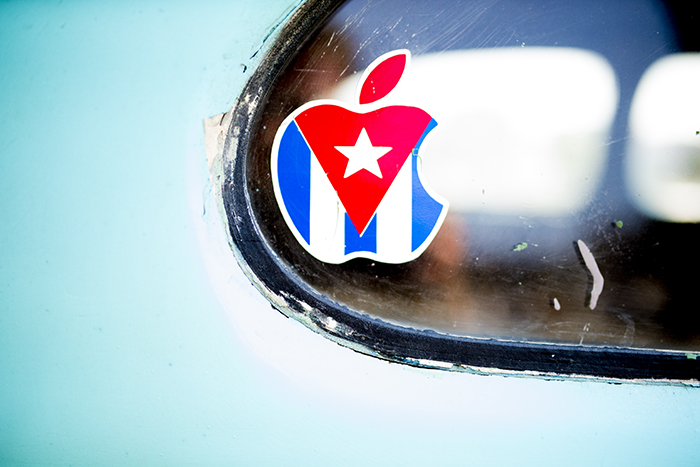 I don’t know the provenance of this Apple sticker seen on a car window, but it appears to be the Cuban flag superimposed on an Apple Computer window sticker.  There is some evidence of new technology, or at least a desire for newer products.  We certainly saw Cubans with older model iPhones, though they were without data plans. 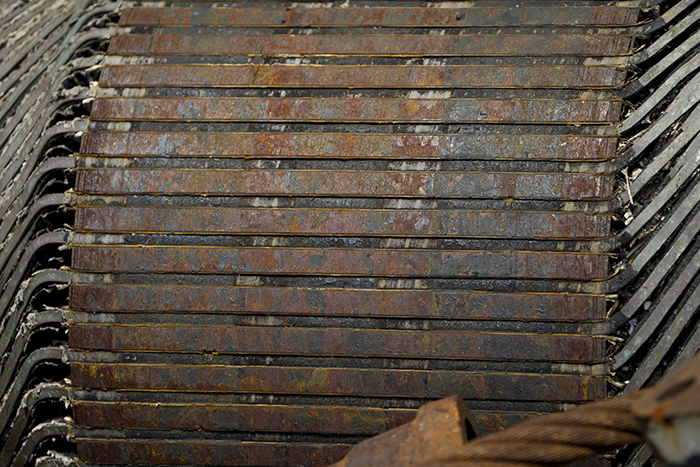 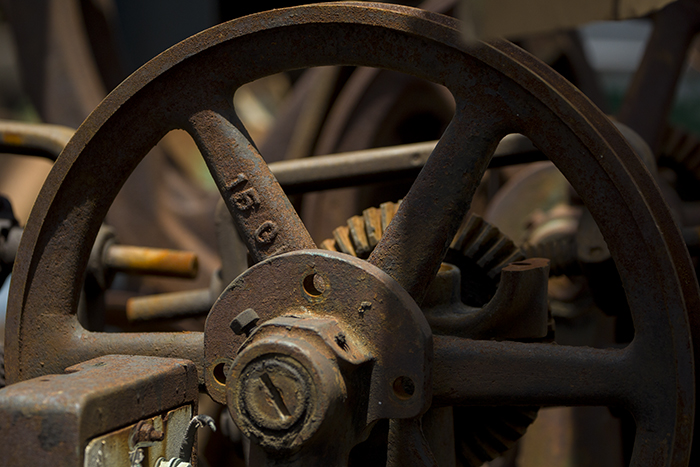 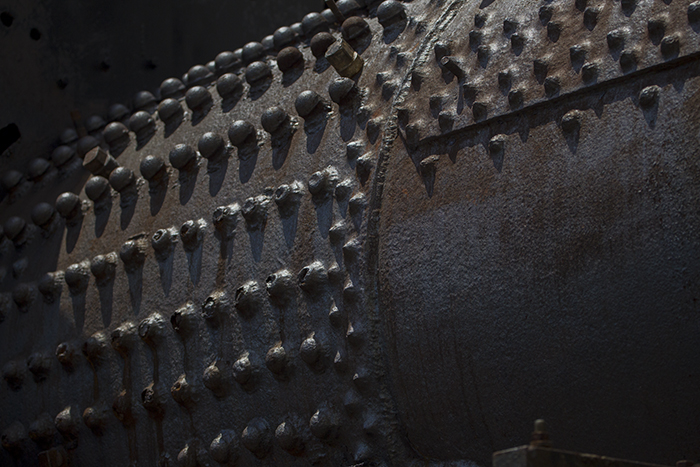 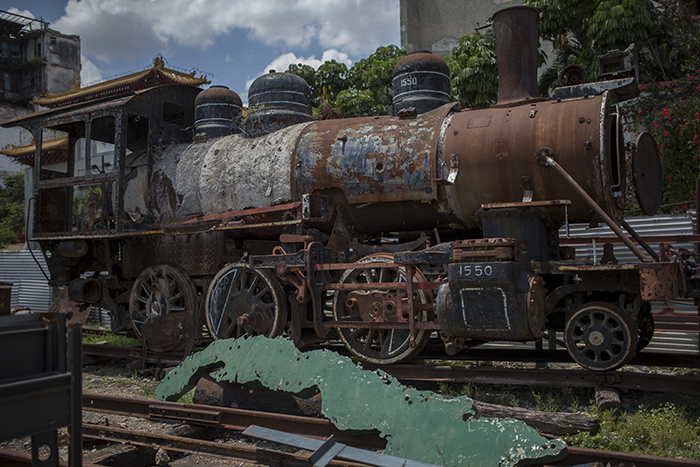 Very close to the old Cuban Capitol building and by the entrance to Havana’s Chinatown, is a lot filled with old trains and railway related materials.  The place is a stunning source for post-apocalyptic textures with rail technology from America that appears to date back to the 1800’s.  One of the engines came from Vulcan Iron Works and another I think, came from Baldwin Locomotive Works.  Someone like Walter Scriptunas II might be able to help identify these more precisely if he ever makes it down to Havana.  Regardless, these trains plied the Cuban rails for some years before finally being retired and then abandoned for scrap.  Its worth a visit if you are in the area, but the place is treacherous with lots of exposed sharp metal and what I suspect to be exposed asbestos that can be seen in the above image covering the firebox and water container.

This is a series of faces or heads that were created as graffiti of some sort seen on one of our walks.  The heads were in different places on the foundations of building colonnades of the former Hotel Trotcha which was originally built as a theater in 1886, then converted into a grand hotel in 1890 before a long slide to boarding house and finally, ruins.