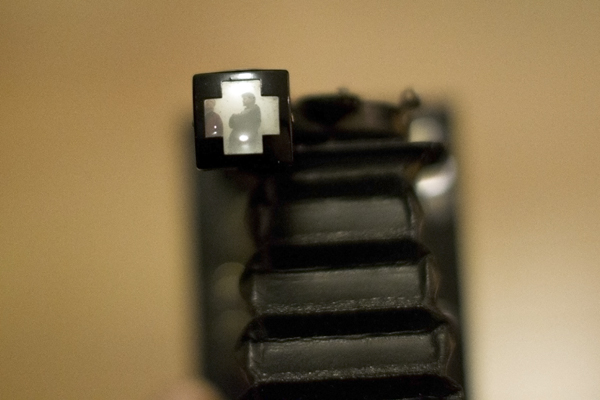 This post was brought to you by the conjunction of a visit to my friends in Portland, Duncan and Greg of Luma Labs fame and the announcement by Kodak of their exit from the camera business.  My *first* camera was an antique, one of those bakelite Brownie Box cameras made by Eastman Kodak and given to me by my Grandparents along with an Instamatic.  After that, I had a few other film cameras over time including an Olympus, a Nikon, a Canon A-1 that I wore out and a Leica all purchased used, but fed almost exclusively Kodak film.  While that Brownie camera was the first camera that introduced me to photography, it was another hybrid Kodak technology in collaboration with Apple Computer that introduced me to digital photography.  The Apple Quicktake camera which I bought new was the first consumer digital camera developed along with Kodak.

The sad part of this is that Kodak is another example of the a company that fell from dramatic heights and has gone from a name that everybody knew to one that does not have nearly the brand recognition it once had that was all things photography.  It could be argued that the greatest invention at Kodak was the digital still camera (created by Steve Sasson with a Fairchild CCD) way back in 1975.  And while the inevitable was seen for years with downward pressure on the film business as a result of the digital camera revolution, Kodak failed to capitalize on the market shift.  The company even had a long history of making specialized imaging chips for a number of companies and government organizations and Kodak did appear to make some strides into developing the digital camera market by making CCDs for other manufacturers like Leica for their M9, but further market involvement seemed limited.  Then rather than continue to invest in digital imagery to compete with Sony Semiconductor, Canon and others, Kodak sold their imaging division which reformed as Truesense Imaging.  One might have thought that given Kodak’s history in high end sensor design and construction, that they might have been a more substantial player in the consumer imaging market.  After all, it was Kodak technology (along with ITT) Kodak actually has a long history in satellite imaging going back to the early NRO/CIA spy satellites, keyhole (GAMBIT) and continuing on to the later more advanced digital based Advanced Keyhole (IMPROVED CRYSTAL) that were developed in the late 80s and early 90s with technologies that helped get us where we are today with commercial satellites like the Digital Globe, IKONOS, GeoEye and Quickbird satellites not to mention the very cool multispectral WorldView-2 satellite. 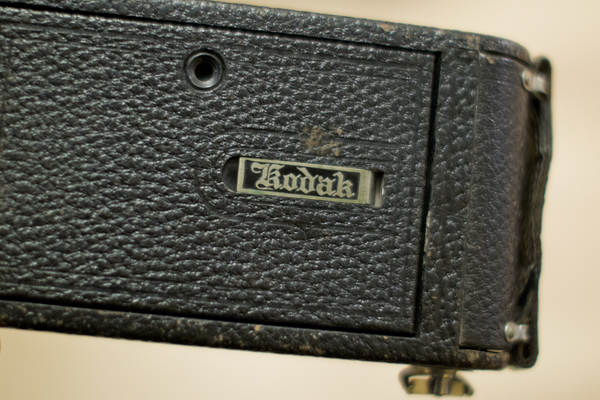 Instead of moving all that technology down to the consumer level as one thought they might, Kodak decided to not compete in digital camera production and outsource that business to Flextronics in 2008 or so followed by this announcement that “Kodak Focuses Consumer Business On More Profitable Growth Opportunities” which put the nail in the coffin for Kodak’s camera business.  The title of this press release is the typical sort of business speak garbage that tries to speak to advantage in the face of failure and is all the more ironic when one looks at the staggering increase in digital camera sales over the past decade and the accelerating trend towards more digital cameras *everywhere*.  In fact, the market trend should have been clear to Kodak two decades ago, but should have been painfully clear in 2003 when digital sales exceeded film sales at Kodak and in 2004 when Kodak ceased production of their film cameras.  Now Kodak is looking to parlay their brand name to other manufacturers who for whatever reason might want to sell their cameras under the Kodak brand which leaves one feeling kinda ill as Kodak cameras have been part of all of our lives for well over a century.  Kodak defined cameras and were an embedded part of society worldwide as the company was critical to capturing moments to be cherished, communicated and even marketed as “The Kodak Moment”.  Yet the movement of time and the vagaries of markets for corporations who fail to adapt and capitalize on demands are inexorable and for Kodak, their time apparently and regrettably, has come and gone. 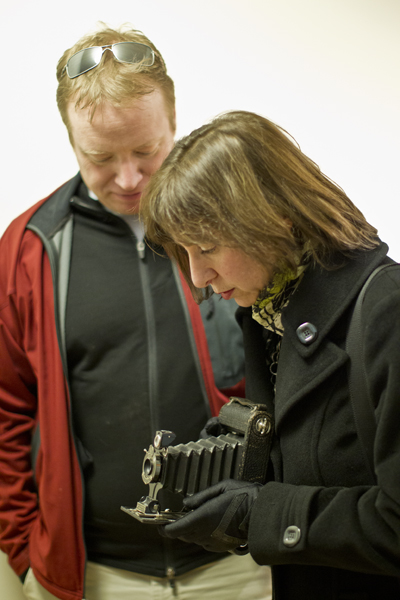 This is Duncan with Julie Wheeler looking at David Wheeler (seen in the intro photograph in the viewfinder) through the viewfinder of Duncan’s antique Autographic Kodak.