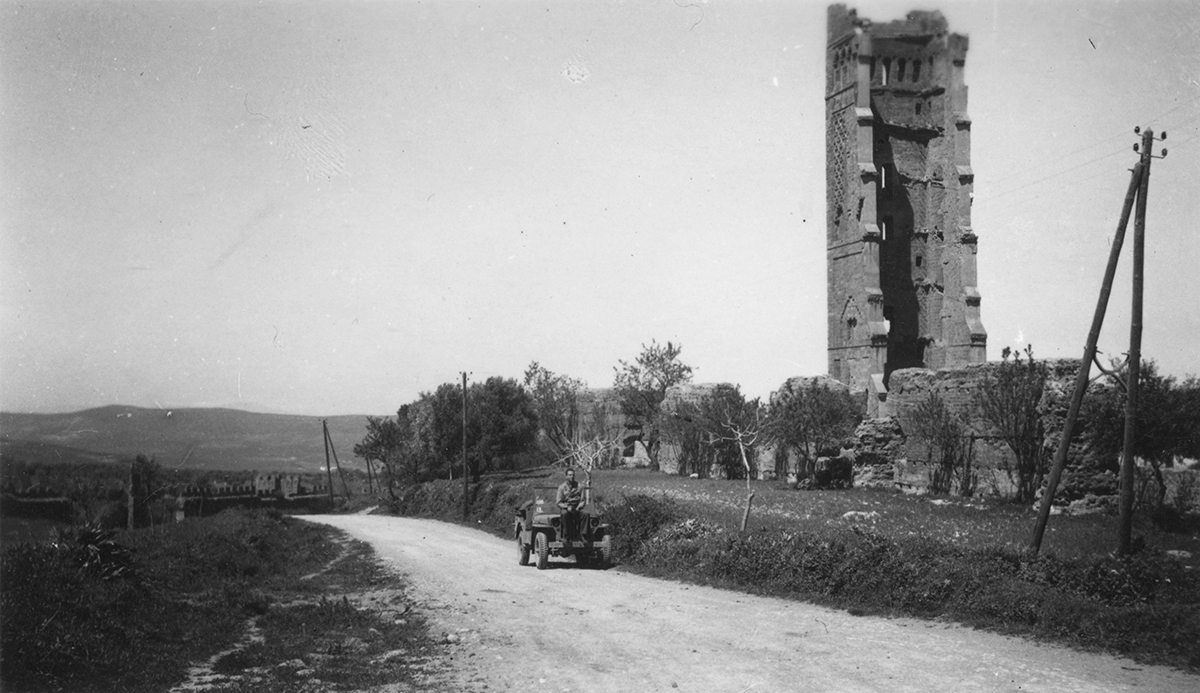 A routine courier run from Algiers, East to Arzew and Mostaganem, then Southwest through Sidi-Bel-Abbes and Tlemcen to Oujda brought my Grandfather and his assigned driver, PFC Monahan (sitting on the hood of the Jeep in this image) to the ruins of Mansoura about 1.5 miles outside of Tlemcen.  This picture was taken looking to the NorthWest along the road that parallels the ruins that interestingly, still exist.  You can see the site on Google Maps here.

The ruins of Mansoura were originally built by Sultan Abou Yacoub around 1300 during his 8 year siege of Tlemcen where he attempted to starve the city resulting in the deaths of many thousands.  The siege ended when the Sultan was murdered by one of his slaves.  The walls still remain along with the tower, a former minaret of the mosque that was rebuilt by Abu Al-Hasan Ali ibn Othman in 1335 during his siege of Tlemcen. Interestingly, not knowing exactly where this structure was in Libya other than a note on the photograph labeled “Tlemcen”, Google provided an amazingly fast way to 1) identify the structure, 2) discover the history of the structure, 3) tell me where the structure was including 4) providing an identical location and vantage point where the photograph was made with Google Earth, all within 45 minutes.  Its hard to remember what research was like before the Internet, but without it, much of the work of putting together these timelines and history would be impossible.  I cannot wait until the entirety of the National Archives and other historical libraries and resources are fully Internet accessible.