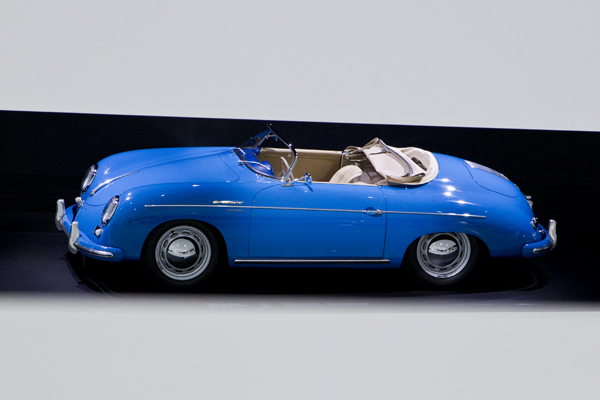 I finally made the pilgrimage to Zuffenhausen, home of Porsche.  All those who are Unabashed Appreciators of Gearheaded Gnarlyness are obligated at some point in their lives to make the trip to where Ferdinand Porsche started his company, Dr. Ing. h. c. F. Porsche GmbH in 1931.  There is something about the shape, the sound and the way a Porsche feels when driving it that inspires a certain passion and this place is Mecca for that passion and all things Porsche. 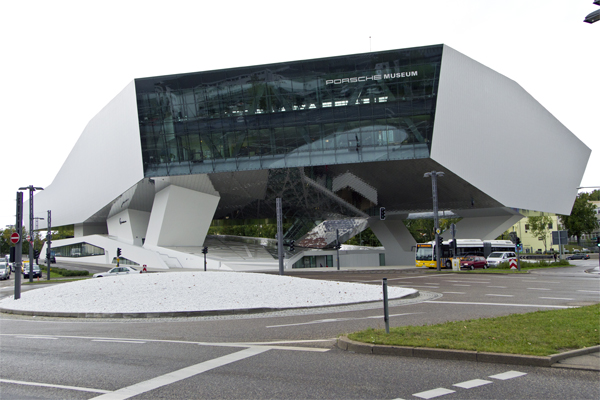 There was some concern that I would not make it in time for my scheduled factory tour, but the Delta flight from ATL to STR got in an hour early, enabling a quick and efficient trip through passport control and on to the rental car counter to pick up my ride into Stuttgart and Zuffenhausen.  Parking at the Porsche museum is easy and quick and I found myself there with time to spare.  I was scheduled to take a factory tour with two other people who were taking European delivery of their cars (sorry, no cameras allowed so no pictures of the factory floor per se).  Perhaps one of these days, I’ll be fortunate enough to have that experience, but likely not on an academic scientists salary. 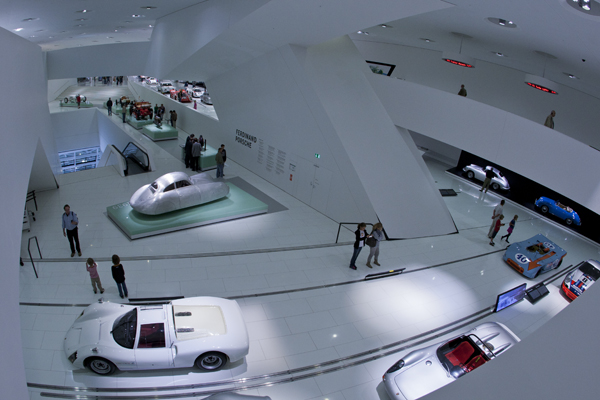 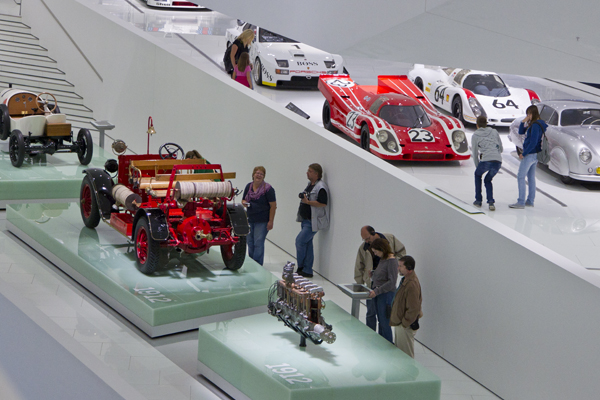 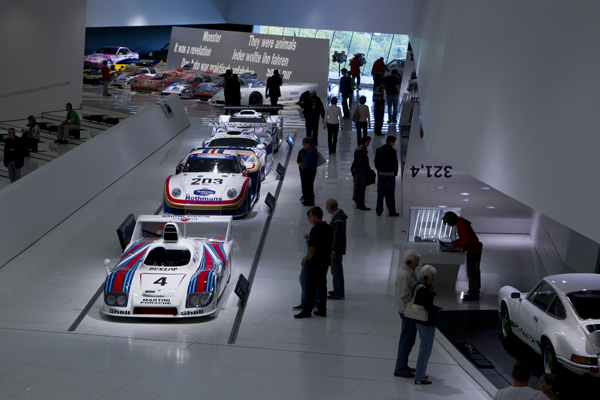 The museum itself, designed by Delugan Meissl is a striking appearing building that viewed from the outside, appears to float.  But inside there is an almost monolithic cleanliness that serves as a blank canvas to showcase around 85 exhibits that reveal the style, design and concept of Porsche.  Road going cars along with an impressive collection of race cars going back to the beginning of the history of the brand including some famous ones shown in the photos above such as the  red and white #23 Porsche 917K driven by Hans Herrmann and Richard Attwood that won Porsche its first overall Le Mans win in a crazy race in the rain that saw only 7 finishers.

The reality is that there are far more exhibits than I can include images of here, so consider this a small taste of what is on display in Zuffenhausen. 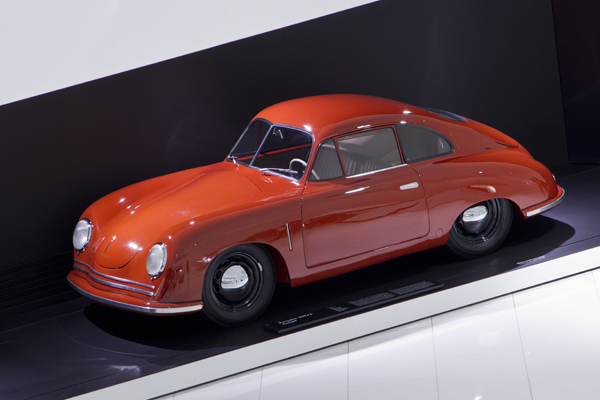 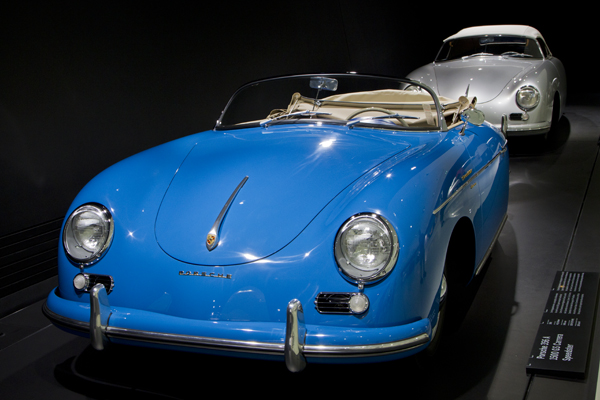 The first set of cars that one sees upon riding the escalator upstairs and turning left are an amazing set of early Porsche 356 coupes and Speedsters including a prototype in silver.  The blue on the 356 Speedster is absolutely phenomenal.  I don’t know if it was an original color or not, but it works so incredibly well. 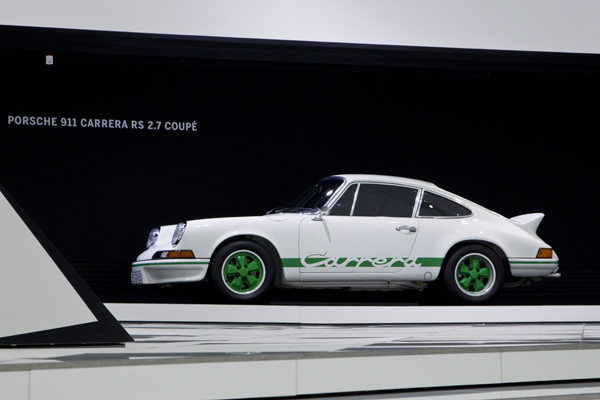 A pristine example of the Porsche 911 Carrera RS 2.7 coupé is on display which in 1973 was the fastest production car in Germany with a top speed of 149 MPH.  This automobile was the first of the 911 models to wear the Carrera name in homage to the Carrera Panamericana road race. 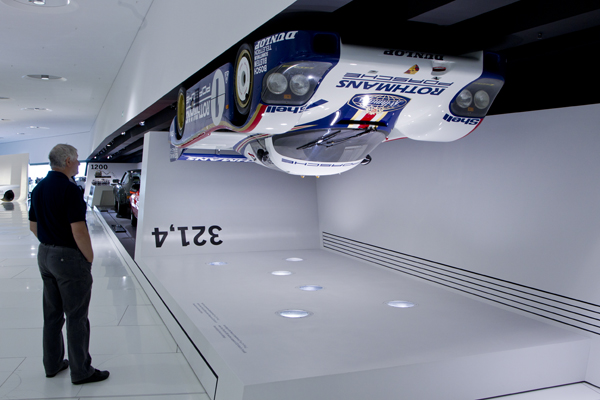 The Rothmans Porsche 956 was a race car designed to optimize the aerodynamics and create an automobile that would not only pass through the air with ease, but also create huge amounts of downforce which would allow it to take corners at much higher speeds than its competitors.  This car with approximately 600 bhp could generate so much downforce that at a speed of approximately 199 mph, it could theoretically drive upside down and stick to the ceiling. 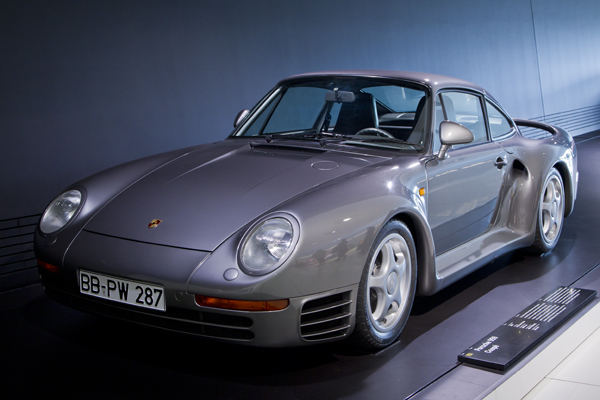 The Porsche 959 came out in 1986 and captured my adolescent mind.  Here was a Porsche that looked like the most exotic space aged Porsche ever, had all wheel drive that pioneered the use of all wheel drive in modern sports cars, used composite products for the body shell and making it seem even more exotic, was not legal for use on roads in the USA.  I lusted mightily after this car as a 16 year old and had never seen one in person until this moment. 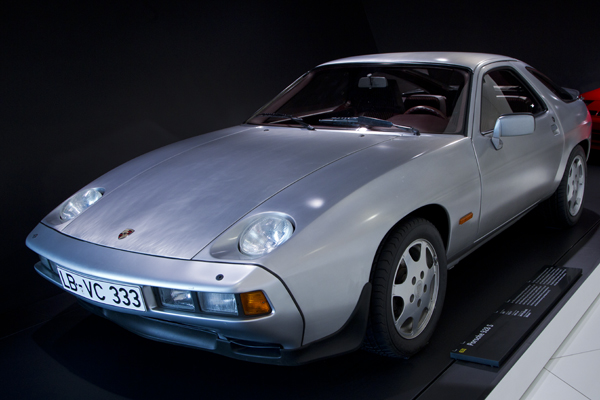 The Porsche 928 was supposed to be an evolutionary replacement for the 911, but thankfully supplemented the Porsche 911 line from 1978 to 1995.  It was an excellent grand touring car, but not the elegant race car inspired automobile that the 911 was. 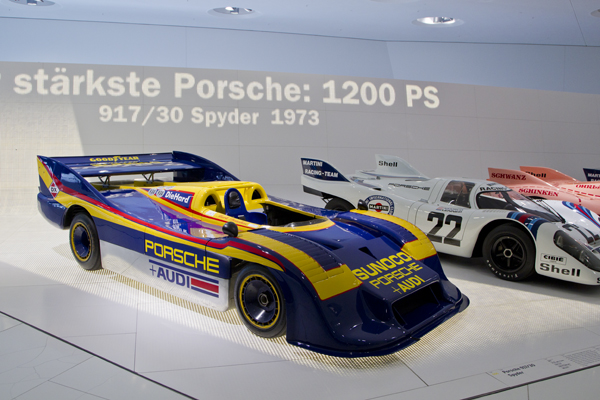 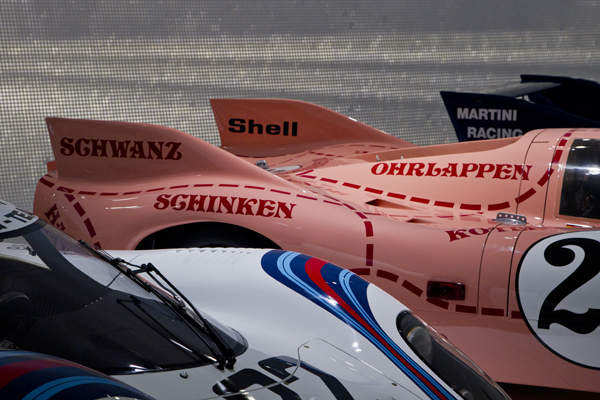 The Porsche 917/20, was built as an aerodynamics test-bed and was painted pink with the names of cuts of meat written across its bodywork and dubbed The Pink Pig. 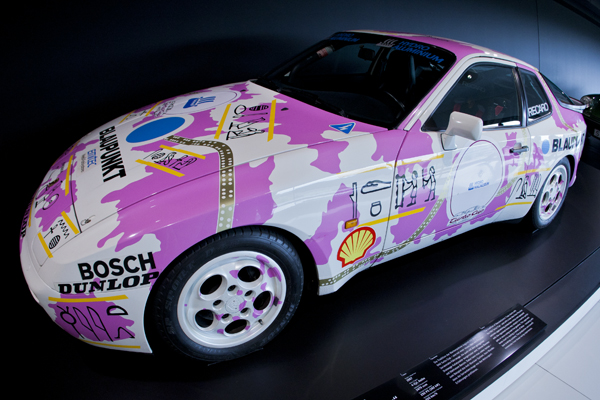 I absolutely remember seeing this Porsche 944 Turbo in the pages of Road & Track and Automobile Magazine in 1987 that was part of the Porsche Cup races.  This car helped to pioneer the use of catalytic converters in racing and also saw the introduction of anti-lock braking systems in production race cars. 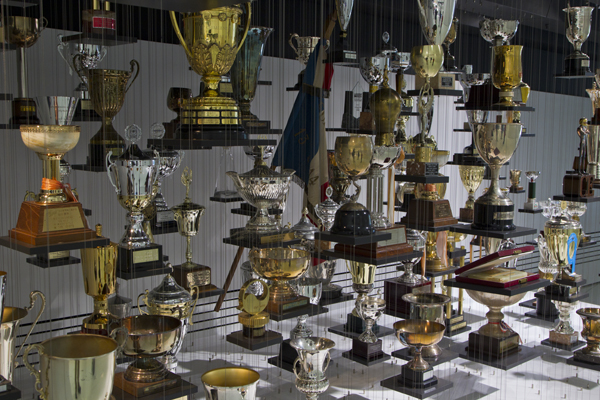 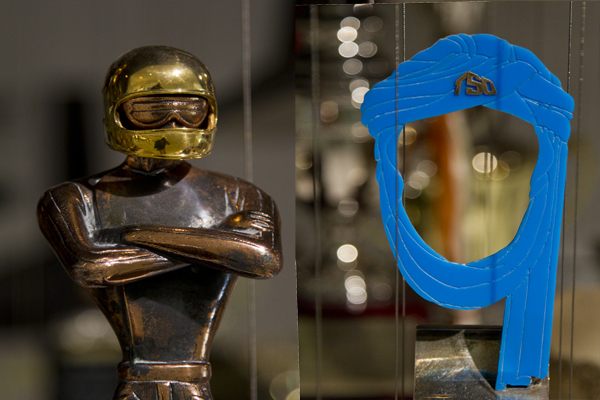 There was also an impressive collection of trophies from wins as diverse as Formula 1 to the Paris Dakar Rally stretching out from the beginning of Porsche’s involvement in racing to the current day. 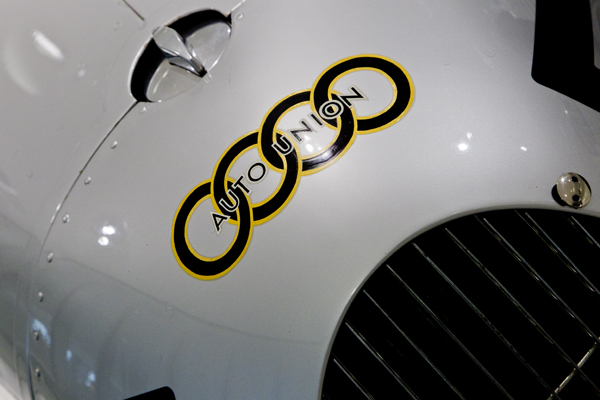 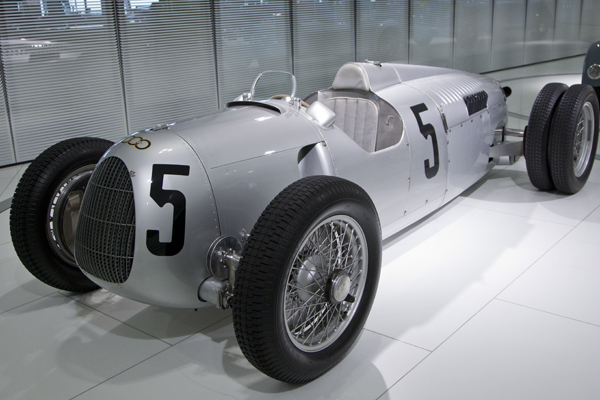 I was stunned to see an Auto Union P Grand Prix racing car at the museum.  This was the first Auto Union race car that I’d ever seen in person with this particular model racking up 30 Grand Prix victories and setting over 15 world records from 1934 to 1937. 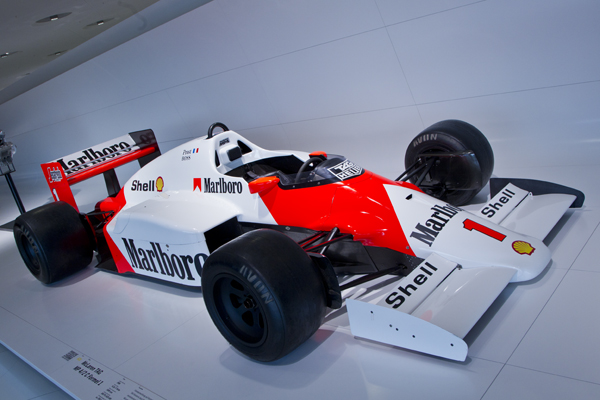 The McLaren MP4/2C Formula 1 car powered by a TAG Porsche V6 engine represented a more modern Formula 1 car at the museum that ran from 1984 to 1986.  This particular one was driven by Alain Prost and represents one of the most successful chassis ever in Formula 1 history. 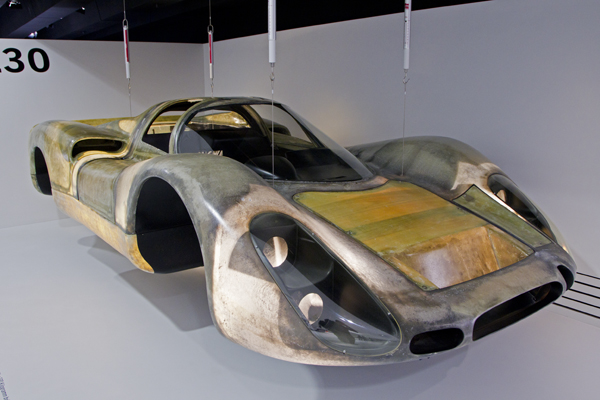 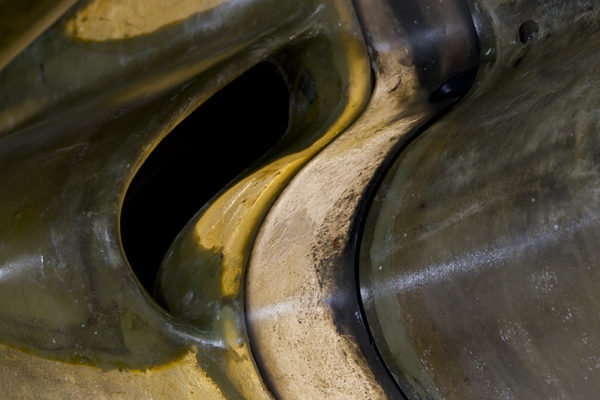 Other exhibits are intended to show the history of technology development and the lengths that Porsche engaged in to make their race cars lighter and faster.  This clever exhibit suspends a fiberglass body shell with lights inside that shine through the thin walls of the fiberglass body, revealing the thinnest parts by how much light is transmitted through them. 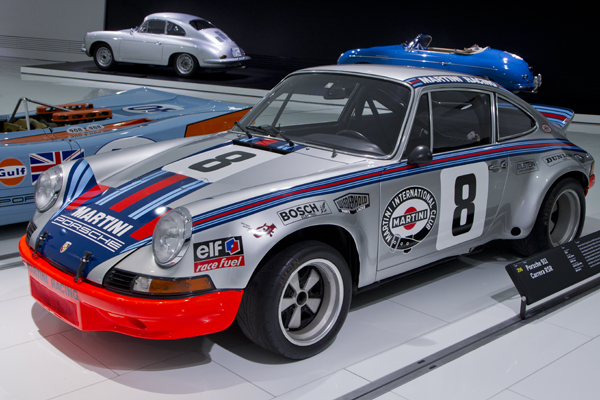 The Porsche 911 Carerra RSR was the supercar of 1973.  It possessed an engine that generated 300 bhp from a 2.8 liter engine and had numerous other lightweight and high performance components that allowed it to win the 24-Hours of Daytona in 1973 and 1975 (no race in 1974 due to the energy crisis) well ahead of cars from Ferrari and Ford.  They were brutal performers capable of terrifyingly fast speeds and incredible performance.  Years ago I drove a 911 that was built to be identical to an original RSR and I’ll tell you that it was a scary car to drive.  I’ve often thought that it would be fun to find an old 911 and build it to resemble a ’73 RSR, though detuned a little bit to make it more streetable. 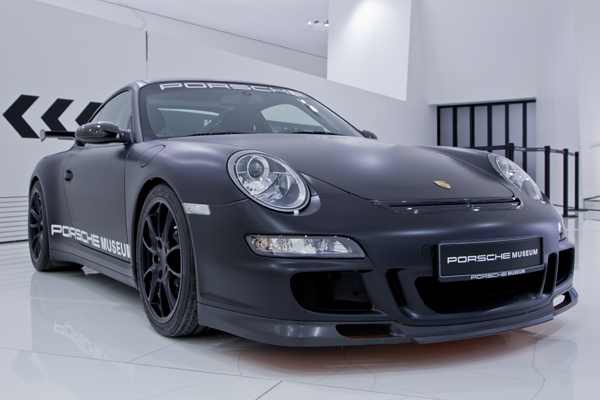 The one car that I kept coming back to in the museum over and over was this 911 GT3 painted in a matte black.  The paint lent a quality to the rounded body work that let the eye roll off the edge and reminded me of the quote from Douglas Adams excellent book The Restaurant at the End of the Universe: “”It’s so… black!” said Ford Prefect.  “You can hardly make out its shape… light just seems to fall into it!”  The blackness of it was so extreme that it was almost impossible to tell how close you were standing to it.  “Your eyes just slide off it…” said Ford in wonder”. 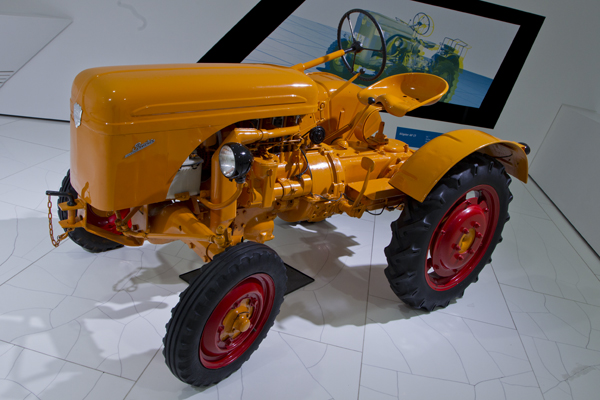 The famous Porsche tractor.  Most folks do not know that Porsche, like Lamborghini also built tractors with Porsche building them from 1934 to 1963.

The Volkswagen Käfer or Beetle, the car that really started it all by providing a revenue stream in royalties to Porsche so they could design and build more performance cars.  This was one of the original beetles whose concept still, like the 911 that it spawned lives on as an iconic shape. 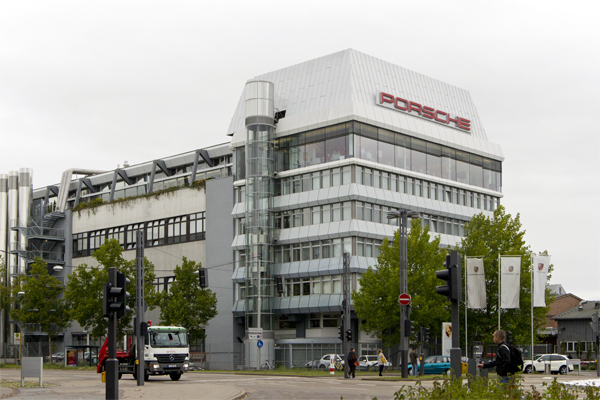 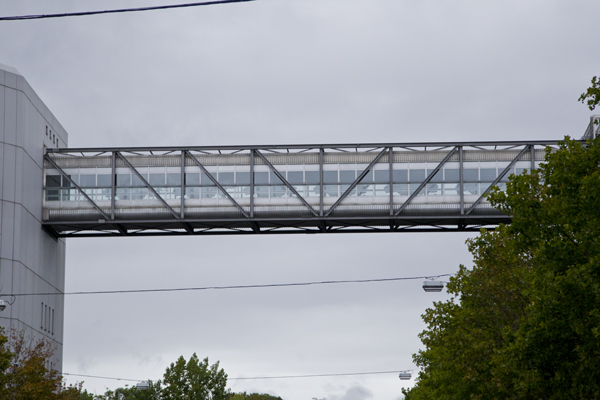 The Porsche factory itself was rather interesting and reflects the increased profit margin that the company has been able to achieve.  There have been a number of cost savings measures including almost factory-wide just in time supply of materials from a variety of sources including body panels that are stamped and supplied by BMW, engine castings supplied by outside suppliers and more.  The just in time concept was borrowed from Japan after Porsche traveled to Japan to study production techniques for implementation at its factories which has resulted in the average construction time for a Porsche being halved from 100 to 50 hours.

Its interesting that while Porsche has 4800 employees, over 3800 of them are in production.  This allows them to produce 160 cars to order per day from Monday to Friday with two 8 hour shifts.  The production line moves forward at 1 meter/minute with the Porsche 911 and the Boxter with all variations sharing the same production line.  In fact, parts commonality is one of the major reasons of decreased cost with the 911 and Boxster essentially are identical under the skin from the A-pillar forward.

Robots which can be seen in the bridge photo above delivering bodies from the building on the left to the final assembly building on the right are used throughout the factory to deliver parts, again… just in time to each production station.  However the interesting thing is that the only robots on the production floor that are involved in actually building the car are 4 robots that help torque bolts to engine casings.  Other than those 4 robots, Porsches are entirely hand assembled.

It was an amazing process to watch and I don’t know if I’ll ever get back to visit the Porsche factory again.  It is a fantasy of mine to take European delivery of a Porsche 911 and see it pass through the glass bridge from the body shop to the factory floor where it is mated with the engine and transmission.  Perhaps one of these days, that fantasy will become reality.