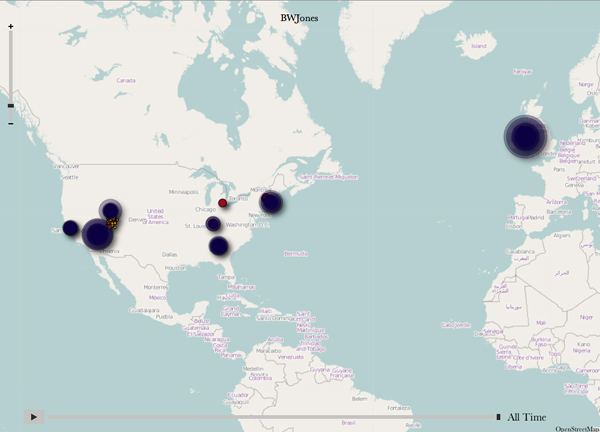 One of the hot items the last few days has been a bit of a controversy in the iOS world, where a group of hackers have discovered that the iOS keeps a log of all cell phone towers that the device has contacted and they’ve released information and an app so you can browse your own data.  I first heard about this on boingboing of course, but the short of it is that the iOS keeps a log of cell towers locally on the iOS device and on the computer that you sync it to.

Lots of folks are understandably upset about this, but the reality is that all smart phones have been doing this for some time including Android based phones.  I’d suspect that carriers are likely more likely to be upset at the release of this information than the handset manufacturers, but this logging has been well documented for some time and in fact, in part legislated as part of the enhanced 911 requirements:  “The U.S. Federal Communications Commission (FCC) has several requirements applicable to wireless or mobile telephones:[3]

So, Location information is not only transmitted to the call center for the purpose of sending emergency services to the scene of the incident, it is used by the wireless network operator to determine to which Public Safety Answering Point (PSAP) to route a call.  The proper thing to do from an engineering perspective is to have the handset (or iOS or Android or whatever) device continuosly update its location and be able to report said location when polled.  The real issue is how long the data should be stored for and who gets access to it.  In actuality, my hope is that these data are not “disappeared” as they are quite useful not only to me but to others who may want/need access to those data in addition to GPS data logging.

My guess is that the data are useful to a number of parties including cell phone providers and manufacturers (e.g. Apple) and that there is some level of information transfer to Apple or network providers, otherwise, why store the data?  I presume that there may even be a place for an app to log these data continuously, the question is, can we get the iOS device to openly deliver those data to an app?  From my understanding though, the phone stores the database information in root on the device, meaning that it would be generally unavailable.  While John Gruber argues that this feature will be fixed in a future update and suggests it might be a bug, I would both presuppose that this was not a bug per say as well as hope for an option to store the data for as long as one wanted as long as it could be gotten to as I find it more than a little interesting and potentially very useful.

The thing to remember is that no computer, and make no mistake about it, smartphones *are* networked computers, have security vulnerabilities and this one on the iOS devices at least requires a malicious third party to get physical access to your device to get the data.  Portable devices are easier to forget, lose, have stolen, etc… so one would have to need to protect these data in just the same way as you would protect your email or anything else on your phone through strong passwords.  However, one  *must* realize that since these phones are containing more and more personal information, there must also be a good way to forensically destroy the data.  Though that is another discussion entirely.

The tracking information that is the source of controversy is nicely revealed in the application produced by Pete Warden, though the important aspect of it is that it also nicely illustrates that the cell phone tracking information is only that… which cell phone towers were accessed and when.  Precise locations are not encoded, though could be derived which is the point of the enhanced 911 protocols discussed above.  While forensics analysts are using the information already, any number of additional tools could be used against you or *for you*.  Its perhaps cynical, but also interesting to note as Maria Langer did that many of those who are complaining about this apparent lack of security are the same ones who are routinely broadcasting their time and place information to the whole internet on Twitter or many other social media sites.

In short, be smart about which tools you use and when, particularly when you are doing things that you would prefer not to be documented.  On that note, I’ll share some of the data from my iPhone (when it was “ON”) below.  There is interesting data to be had for sure including locations of cell phone towers, coverage, patterning, relationships to geography and more. 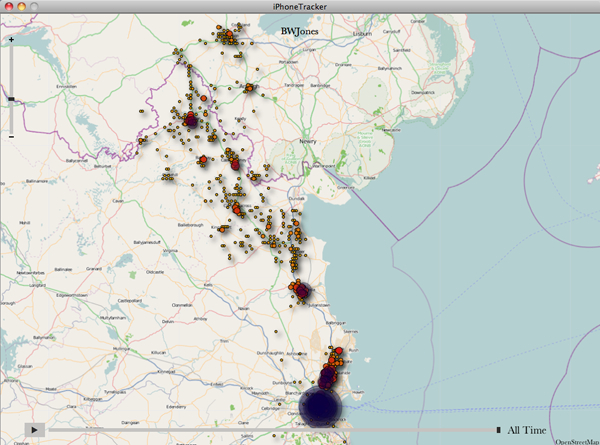 Our trip to Dublin and Glaslough/Castle Leslie was documented nicely.  You can see our detour to Monaghan and also how limited our visit to Ireland was.  Next time, I’d like to cover more territory and see more of Ireland. 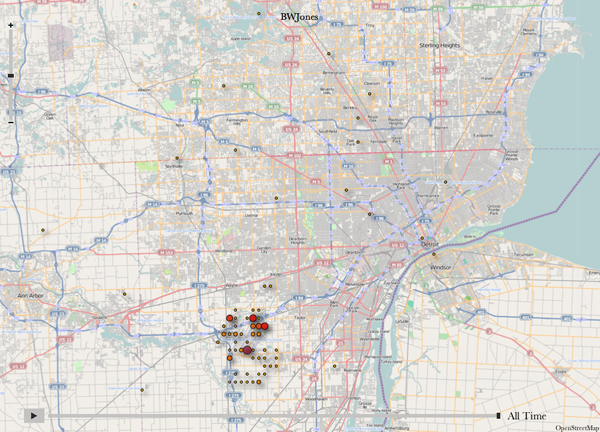 A quick stopover in Detroit on my way to another destination was nicely captured.  It is interesting to see how many cell towers near *and far* are contacted by handsets.  Of course geography plays a role here as Detroit is seriously flat. 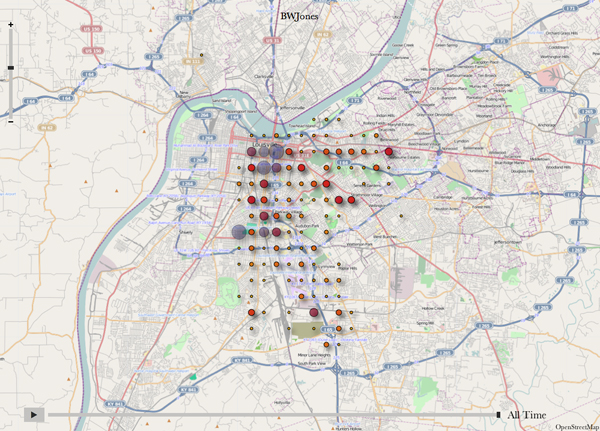 These data come from 2 trips to Louisville last year here and here.  The regularity of cell phone towers in Louisville Kentucky is pretty stunning.  It appears to be in an almost crystaline array, though why this cell traffic was restricted to this square and not outside the square particularly when most my time was downtown surprised me. 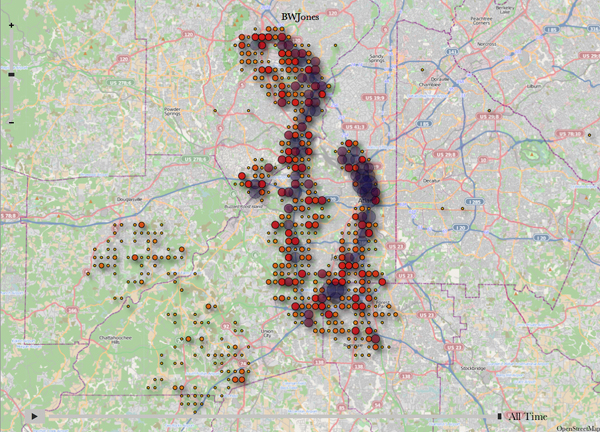 I made several trips to Atlanta, one is documented here.  The clustering of cell phone towers is interesting.  You can see where I flew into at ATL, and the trips up to Dobbins Air Reserve Base to do work with Lockheed Martin.  The cluster of cell phone towers to the South West is a little surprising as I spent no time down in that part of Atlanta. 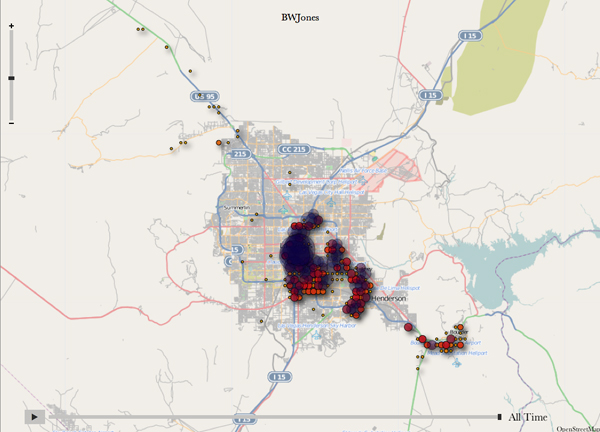 One of two visits to Las Vegas is documented here.  The other trip to Nellis AFB involved having to turn the cell phone off. 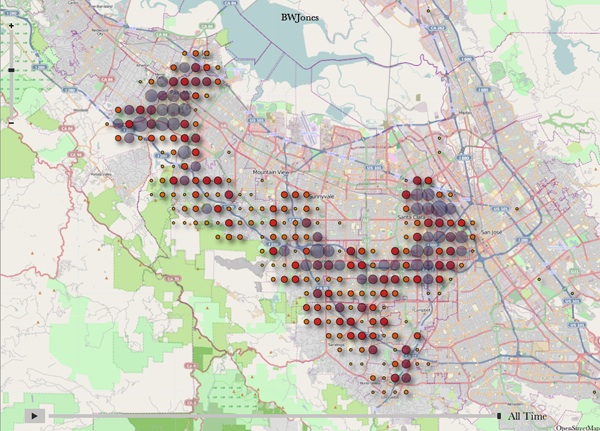 My visit to Stanford, Apple and family is documented here and nicely illustrated in these maps.  Again, its interesting how regularly the cell phone towers are placed in the South Bay area which always makes one wonder about the economies involved.  How does one start to read in what companies are investing in infrastructure and how does other costs factor into that?  I know of one neighbor that got a new garage out of a deal with a carrier to put a cell phone antenna on top of said garage.  The other interesting item to note is that it must be a completely different carrier from AT&T as we seem to be inbetween two cell towers which might explain the relatively poor coverage we get in our home. 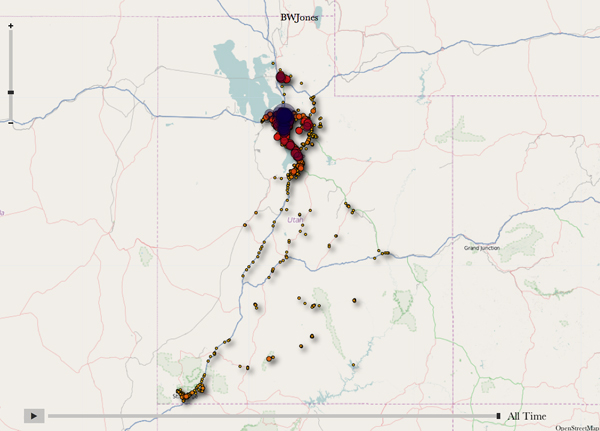 Most of the time is spent in Salt Lake City, but there are occasional side trips including a short visit to some excellent peeps, Ann Torrence and Robert Marc down in Torrey.  We can also see irregular cell phone coverage on my trip out for The Gooseberry Collective meeting documented here.  The Fishlake National Forest does not seem to have any cell phone coverage, at least from AT&T. 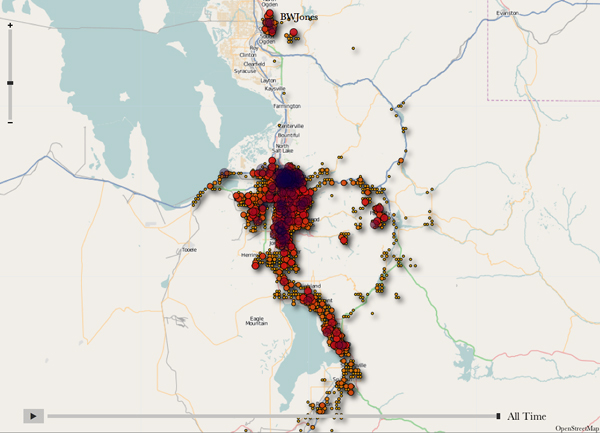 A more granular picture of the traffic and time spent in Salt Lake City, Ogden, Park City, Hill AFB and Provo.  Cell phone towers seem more irregularly spaced out here with some zones of regularity, but the mountainous terrain and other geography partially dictates where those towers will go, though where possible, towers do seem to be regularly spaced. 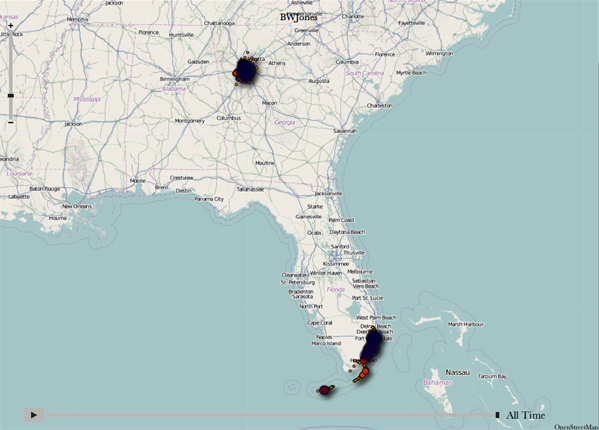 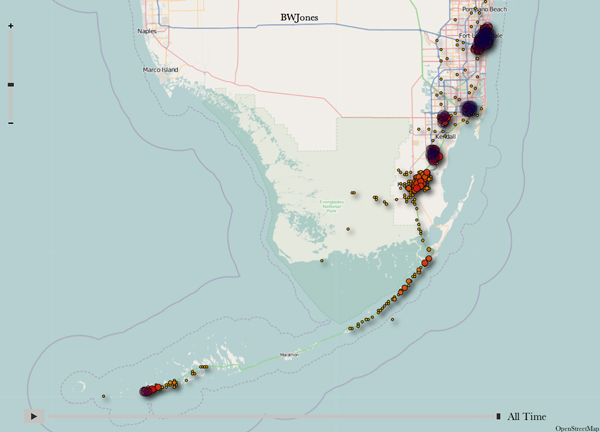 Updated images 05/07/11:  Shots from the last trip to Florida and the Florida Keys.

In short, its information and I love to have access to information.  Were there more time, it would be fun to start analyzing and graphing these sorts of data to see what additional information could be extracted.

Apple had published a Q&A on the issue here with a rather well thought out rationale and explanation.  They also claim to release a software update that addresses some of the issues and it looks like it will reduce the size of the available database some which is disappointing I suppose.

Looks like Apple has released iPhone update 4.3.3 that effectively reduces the size of the available database for tracking.  Since I’ll be updating my phone in about five minutes, I posted the position data final images of the last trip to Florida and the Florida Keys above.