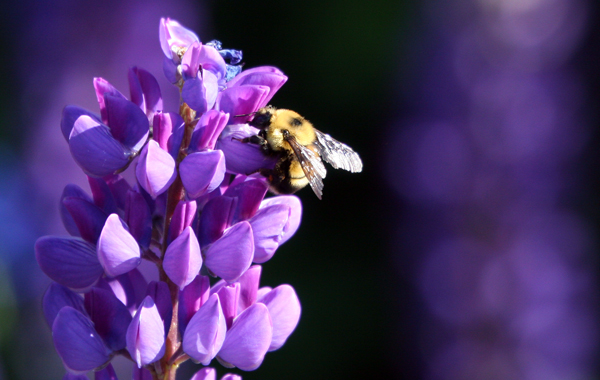 We went up to Teton Valley for my father-in-laws birthday over the July 4th weekend. For those of you unfamiliar with the geography, the Teton Valley is just over the pass from Jackson Wyoming. Jackson is becoming a bit passe for me as the crowds and folks claiming it to be a “destination” have just about ruined the place for me. It is almost comical to see folks who have money but absolutely no taste saunter through town in their matching his and hers fur coats and boots after getting out of their G-Class Mercedes nee Geländewagens. The shopping in the old part of town is tourist hell and the last time we went looking for a rug, it turned out to be one of the most aggressive sales attempts at foisting an overpriced “indian” rug on us that I have ever experienced.

The Jackson area is also where Vice President Dick Cheney calls home and is one of his “undisclosed locations” which is public knowledge and somewhat comical given the dramatic entries and exits that he and his entourage make whenever he comes into town (like every other weekend) with his Air Force chefs (three), Air Force physicians (two), anti-aircraft missile batteries (seriously) and a small battalion of Secret Service agents, C-130 transport planes flying into and out of the airport, convoys of Secret Service Suburbans careening down the highway at 90 MPH with lights flashing and guns bristling, and hoards of snipers and Secret Service agents lining the Snake River carrying tactical rifles and Heckler & Koch submachineguns whenever VP Cheney is fishing. Seriously though, I cannot imagine a better job than being a Secret Service agent and getting paid to fish, but it is rather curious seeing MP5ks as a fishing accouterment along with waders and rod and reel.

It is true however that the country that surrounds Jackson really is amazing and the town serves as the gateway to both Yellowstone and Grand Teton National Park. Jackson also has the Snake River that flows through the valley and a vibrant art community, but as a place to get away to and have a base of operations to enjoy the outdoors, Jackson is starting to fall short for me as it is becoming too developed and bad money is following good. Development in the Jackson area is becoming extensive and I suppose inevitable as what they say about the billionaires forcing all the millionaires to move out of Jackson is unfortunately somewhat true. However, the final nail in the coffin for us was the elimination of the Spring Creek Equestrian Center which was sold for economic development and a change of flavor from the dressage, cross country and three day eventing that made it so wonderful to more “western style” equine pursuits like barrel racing and rodeo type events. The Spring Creek Equestrian Center was one of the few places where a combination of beautiful scenery was combined with an accessibility to the rather extensive cross country course. I have yet to see another equestrian event like it with a degree of accessibility that this place provided allowing for spectacular photography. Unfortunately, The Event at Jackson Hole is no longer and the trips we took to Jackson to participate in and enjoy that event are relegated to history. 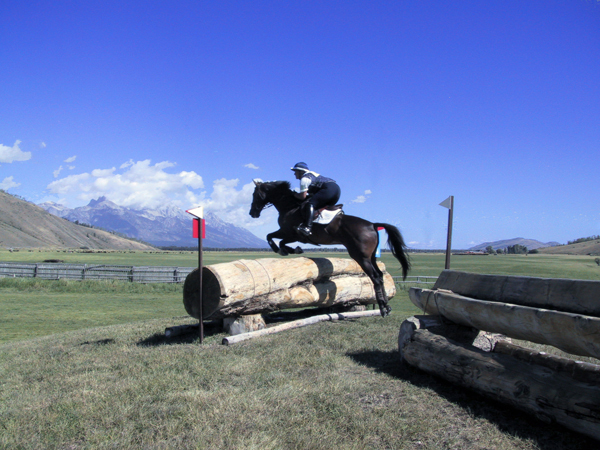 No, for me, the place to go for a real gateway to the area is just over the mountain pass from Jackson. Teton Valley is far enough away from the trust-funders who along with their feelings of entitlement combine with the tourist crowds to make Jackson Wyoming so…… irritating, but Teton Valley is also close enough to partake of some advantages that the area possesses including some of the art and music events held in Teton Village. If you are looking for a place to go to access the wilderness, the Teton Valley, including the towns of Driggs and Victor are just the location to base your operations and explorations of all things outdoors including kayaking, climbing, hiking and fishing. The valley is home to the Teton River, some of the best trout fishing around without the crowds or as many private property negotiations that take place on the Snake River. If hiking or biking is your thing, there are some truly spectacular hikes and rides around the Teton Valley with one of the nicest being up Darby Canyon into the Jedediah Smith Wilderness.

This year in particular was impressive because of all the water and snow the West received which, hopefully represents the end of a five year draught which has obvious repercussions on the farmers and the not so obvious implications for the trout fishers in the Teton River as most farmers reduced or eliminated water flow into the river from tributaries. Because of the additional water this year, this trip was an opportunity for lots of photography of birds, flowers and bugs which were present in abundance. We did not have any bear sightings this year like the thrilling Grizzly bear (Ursus arctos) incident while mountain biking a couple of years ago, as the bears are likely happily eating on an abundance of berries much farther back in the wilderness. 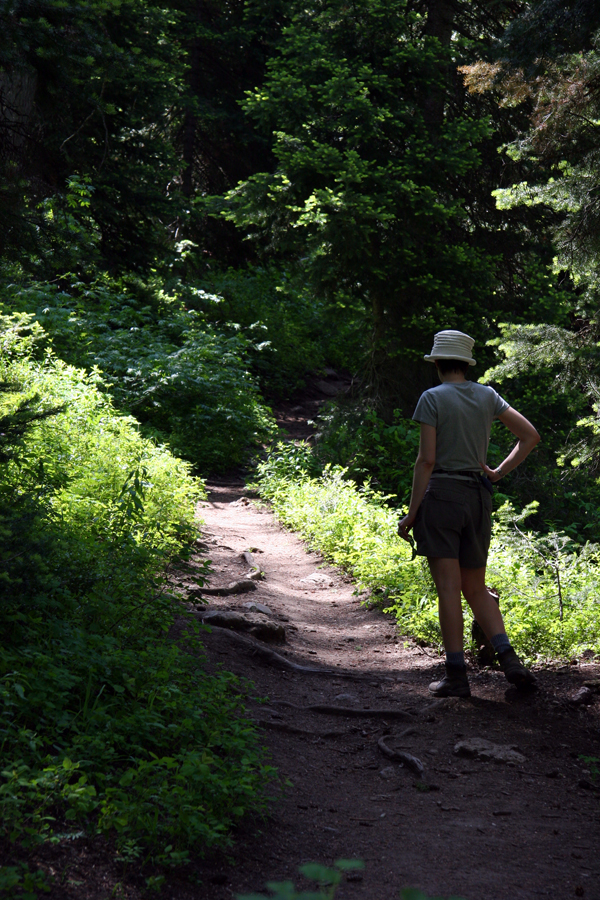 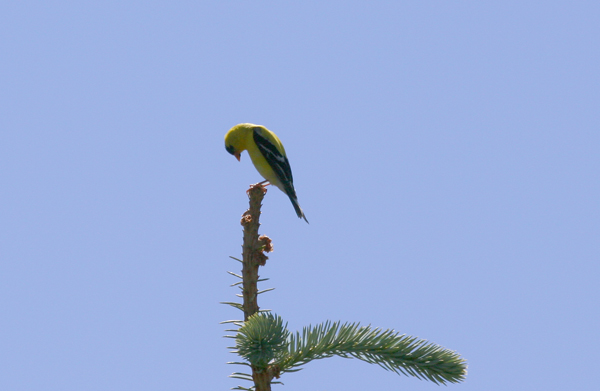 The bird life is amazing this year likely due to the plentiful water and resultant bug life. Just about every bird I saw this year looked quite healthy such as this American goldfinch (Carduelis tristis). 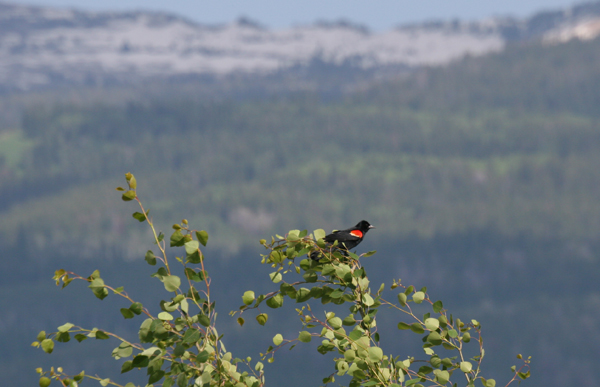 This red winged blackbird (Agelaius phoeniceus) had taken up residence in a group of aspens and was quite aggressively defending his territory from other intruders. 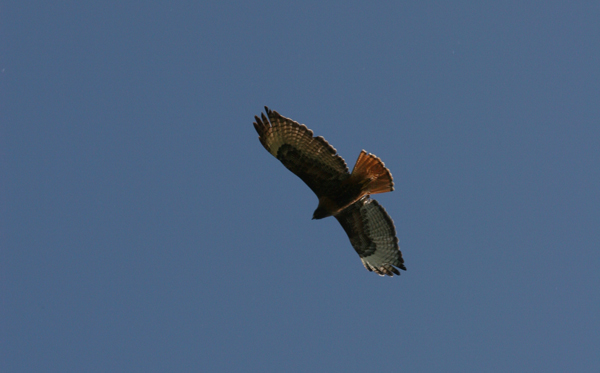 This red tailed hawk (Buteo jamaicensis) had a nest someplace around the entry road going up to Darby Canyon. She staked out a vantage point from one of the phone poles and was quite actively hunting for rodents and such. She also had to tolerate the most amazing display of territoriality from smaller birds against a larger bird of prey that I had ever witnessed. They were constantly dive-bombing her while in flight in an effort to get her to leave. She seemed to take it in stride however and continued her hunt. Mushrooms growing in a cut stump up Darby canyon. C could probably tell me what these were, but unfortunately, I forgot to ask. C, if you read this, let me know and I will update it with the proper name. 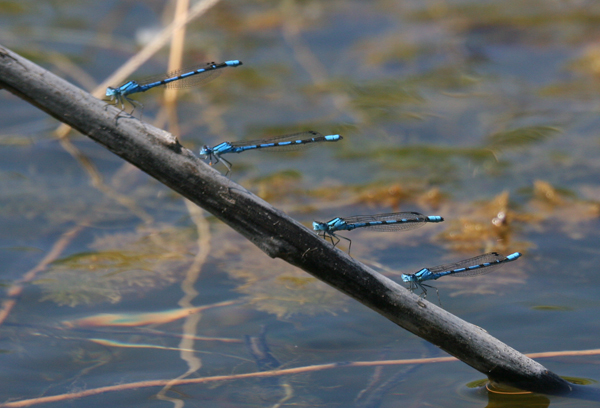 Lots of dragonflies and damselflies this year. Here we have Common Blue Damselflies (Enallagma cyathigerum). I really wanted to get a closer shot of their eyes as the blue coloring also covers the ommatidium. I am simply going to have to invest in a macro lens at some point in the near future to get a closer view of all the amazing insects around not only here, but even in my own back yard. 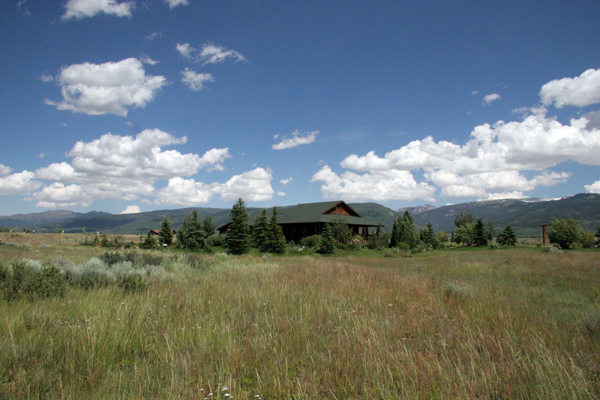 The family compound at approximately 6200 ft. for socializing, partying, conversation, et cetera without all the close proximity of the houses and people on the other side of the pass. For the party, H made two kinds of some of her famous cookies (she makes the absolute best cookies in the world). The birthday cake was delicious and was provided by Pendl’s Pastries in Driggs. Pendl’s is a traditional Austrian bakery that makes some amazingly good deserts. Even cooler, they are a Wi-Fi hotspot. So, when you are in the area, drop by for some of the best dessert, coffee and wireless Internet access that can be found anywhere. 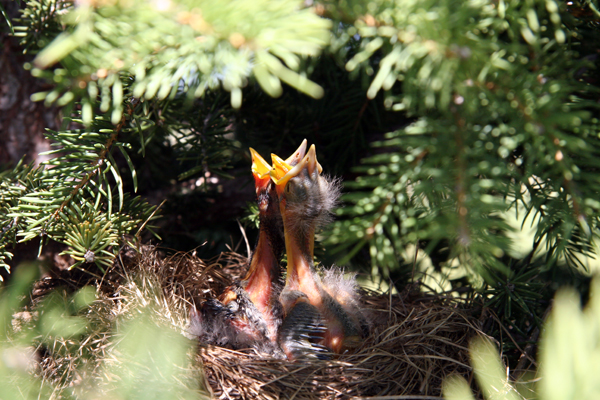 I found this robins (Turdus migratorius) nest just off the big house in a pine tree. I was sitting under the tree while watching a game of horseshoes and heard these little guys chirping away for their parents to feed them tasty insects. 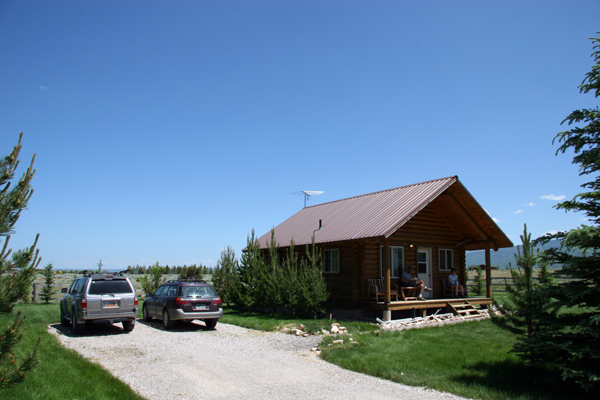 The “kids” cabin just down the road is a welcome place to shower and crash after exploring the wilderness. 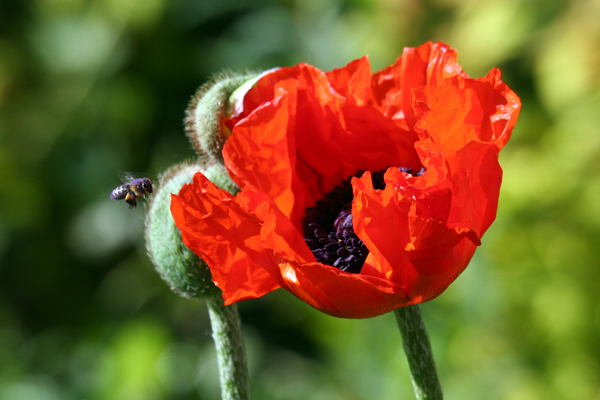 Poppies planted off the big house. Some of these had the most intense orange color that burst out of the green background and just about seared your retina. As for the bees, I counted at least a half dozen species in the garden within about ten minutes each packing their legs with huge mounds of pollen, eventually heaving themselves into the air to “fly” on to other flowers and then home to make honey. Go bees, Go! 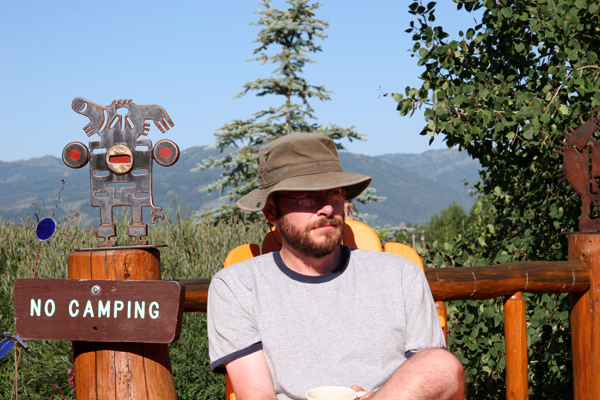 My brother-in-law, “C” and family mycologist who also has a pretty astounding understanding of and appreciation for botany. “H” hanging out on the back deck. 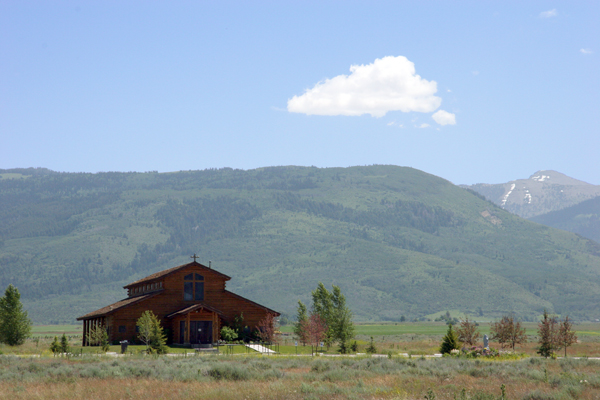 The Good Shepard Catholic church just down the road. One of the more beautiful places I can think of to place a church. 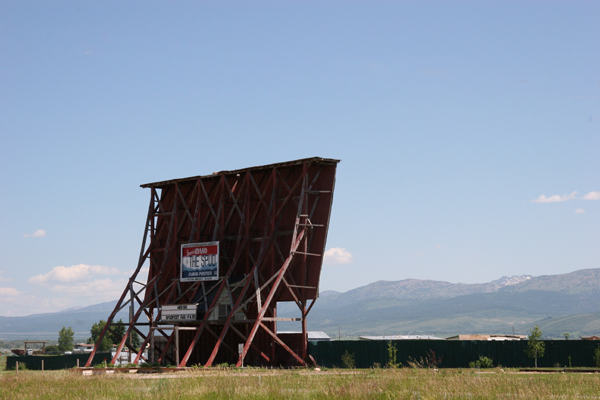 A local landmark, the Spud Drive-In. Their website sucks, but you gotta love the name. 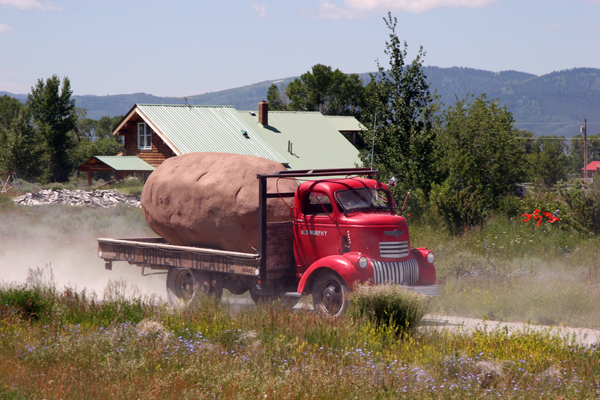 Only in Idaho, right? Seriously though, this is the truck that is normally parked in front of the Spud Drive-In and here I caught it driving back from the parade in Victor, Idaho. 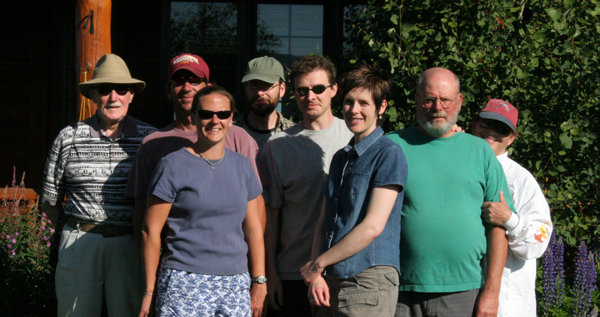 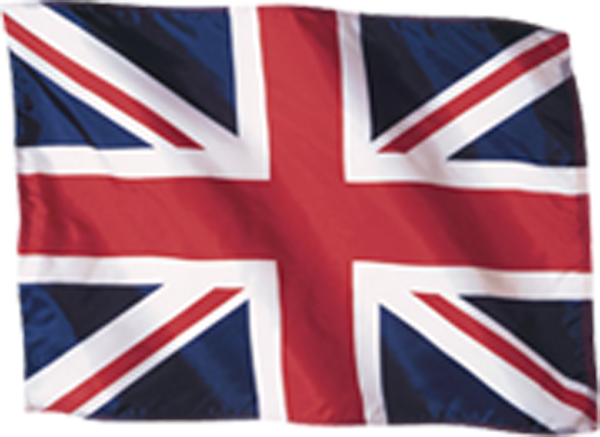 Finally, as I type this, I am getting notification of the Bombings in London. I would like to extend my thoughts and prayers to those persons and families affected by this outrage.