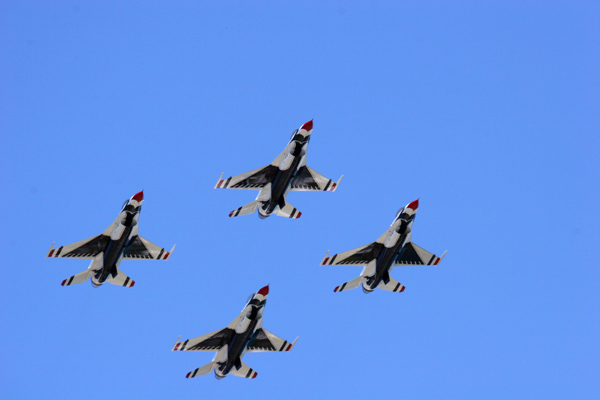 After having been stuck on a plane sitting on the tarmac for three hours, my suspicions have been confirmed about cell phones in flight. Approximately an hour and a half into the delay, the pilot allowed the cabin to use their cell phones while on the ground. Of course there were folks that were trying to make accommodations because of the delays, arrange for alternative transportation and such, but unfortunately there was also a fantastic din of other people using their cell phones for the most banal of conversations that reminded me of how bad things would get if the FAA allowed cell phone use while in flight. People just don’t seem to have a sense of awareness outside their own little universe. The flight delay was not Delta’s fault as it was a weather related delay, and the flight crew was most courteous in the face of some disgraceful behavior on the part of passengers. When it comes down to it, I want to fly safely and if that means a delay, so be it. Admittedly though, it was a bit of a trial when you consider that sitting in a coach class seat for three hours (enforced because we were on a active taxiway) followed by an almost five hour cross country flight is somewhat tiring, especially with a cold (more on that below). For that amount of time, I would really want to be getting off the airplane in someplace nice and exotic. However, getting home to H was about the best thing I could have wished for.

The last few days have been a blur of meetings, discussions, potentially very good news that will have to wait until later pending the outcome, good food and unfortunately, the second cold I have ever caught at a meeting. So today I decided to avoid giving this thing to anybody else at the meeting and just head to the airport a little early, find a dark corner someplace and get some work done. This is made considerably easier since the airport is doing what most airports around the country should do. Specifically, they offer free wireless Internet access whereas many other airports are making you pay for the service. I will tell you all that I am more likely to want to use a particular airport if they provide appropriate services to those people that travel through. It is simply good business and has taken the edge off of some of my negative impressions of Ft. Lauderdale. For the most part, Ft. Lauderdale is a nice place, but the drivers here are amazingly aggressive with absolutely no consideration for pedestrians. One would think that the city would do more to control the traffic around the convention center here, as we had two examples of drivers who felt they could turn even though there were pedestrians in the cross walks. One woman in a BMW drove by us so fast and so close (less than a foot away), both of us had to yell at her, even Todd who is usually pretty quiet. It turned out that she was pulling into the parking lot of the same sushi restaurant that we were going to. We sat down, she took one look at us and got back into her car and drove away. She did not miss much however, as Tokyo Sushi on 1499 SE 17th St. in Ft. Lauderdale this year was pretty mediocre. The size of the nigiri pieces were much smaller than in the past, the fish had ragged edges like it had been cut with a butter knife, and the maguro appears to have been treated with CO2 to make it red and hide the lack of freshness that was apparent. It’s too bad because this used to be a favorite place to go for lunch during the ARVO meetings.

On my way out of town to the airport, the driver of the car in this image was behind me as we approached a red light. He suddenly accelerated, going around me in the median, racing through a red light and almost hit another car in the process. Traffic caught up with him two lights later where I snapped this picture. The really sad this is, look in the rear window. Yes, that is a child seat. 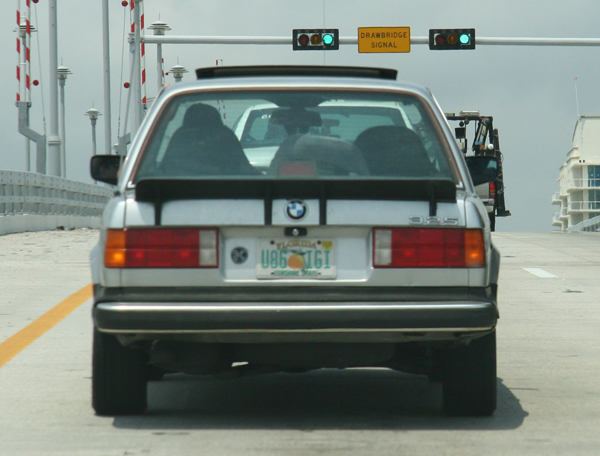 Ft. Lauderdale also appears to have grown much more right wing this year as opposed to years past. There were more billboards for local radio personalities advertising “discussion that will anger liberals” or something like that along with some truly unbelievable radio ads that more resembled some of the more distasteful SPAM I get and I was unable to find an NPR station anywhere on the radio. Everything down here seems geared around image and conspicuous consumption. There appears to be significant pressure for people to drive high end automobiles and I’ve seen more Bentleys, Rolls Royce automobiles, Lamborghinis, Ferraris, Mercedes, BMWs and Porsches than just about anywhere else in the world I’ve traveled. The people down here are interesting to watch as well with lots of cosmetic surgery and augmentation apparent, but we’ll let that go for now.

Photos were lighter than I anticipated, however some civil disobedience around the terminal was necessary. Todd arrived in town so I had to take a few photos to commemorate his first scientific meeting. He presented a poster on determining cell cycle differences in a particular model and was an absolute star, with full command of his subject matter, a confidence and ability to talk to complete strangers about his science that belied his undergraduate status. When a number of folks found out he was indeed an undergrad, they seemed truly stunned. I wish Todd the best in medical school and hope that he does decide to continue some of his efforts in research as he will be an asset to the community. 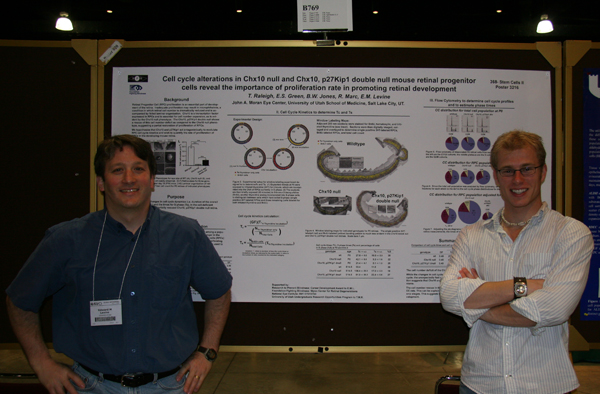 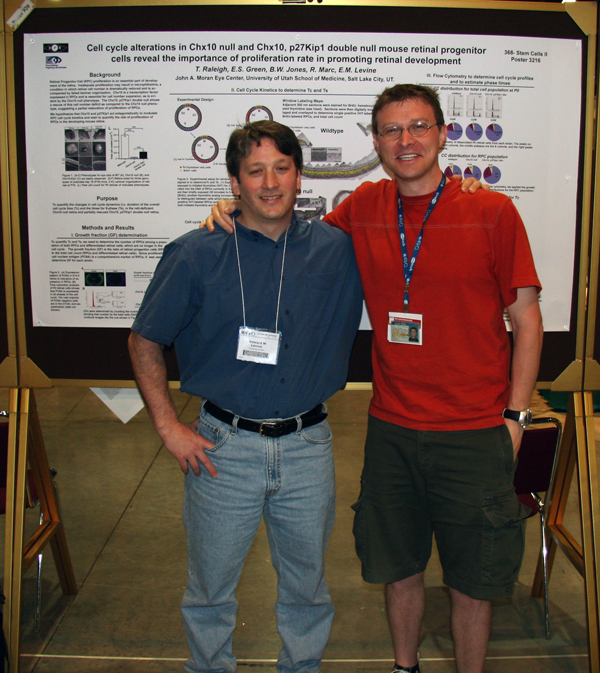 I also got outside the meetings a bit to do some photography, capturing some planes, helicopters, birds, people and ships like the namesake of her class, the Arleigh Burke. 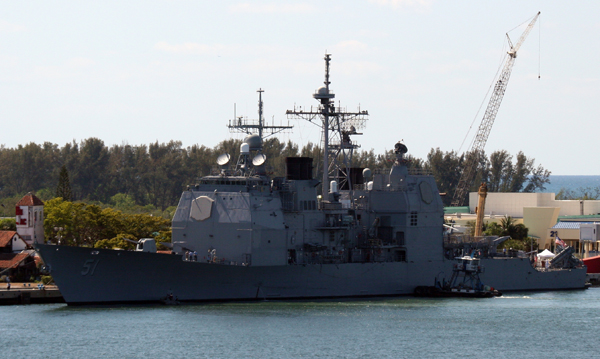 If you have the resources, you can charter this yacht, the Excellence III.

Unfortunately, we did not get to the Keys this trip due to bad weather in the afternoons, horrible traffic down through Miami and being busy at the ARVO meeting. I hope next year to make it not only to the Keys, but also to the Dry Tortugas for photography, snorkeling and bird watching as opposed to all of the tourist stuff that just seems to get in the way. All that said, some photography from the coast was possible, catching bits of the Air & Sea show which was going on for the first couple of days during the meeting which was how I got the shot of the Thunderbirds for the intro image. 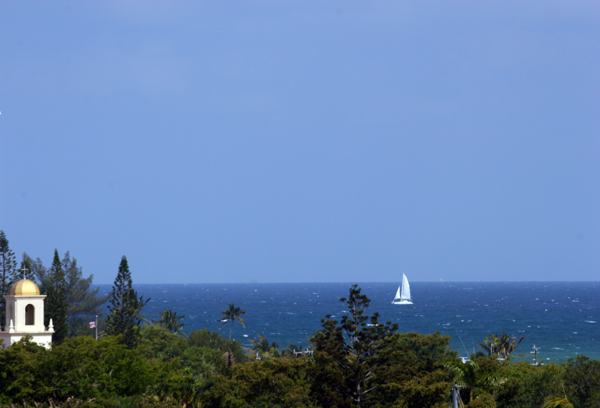 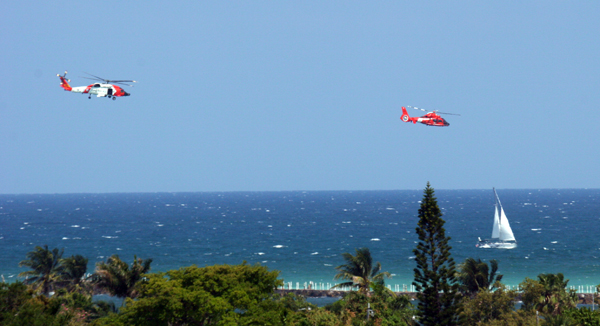 I was not originally going to go to ARVO this year, but every time, I am reminded of why I go. Aside from all of the science that is presented, one meets old friends, make some new ones, and arrange collaborations for new projects that all seems to happen every year. 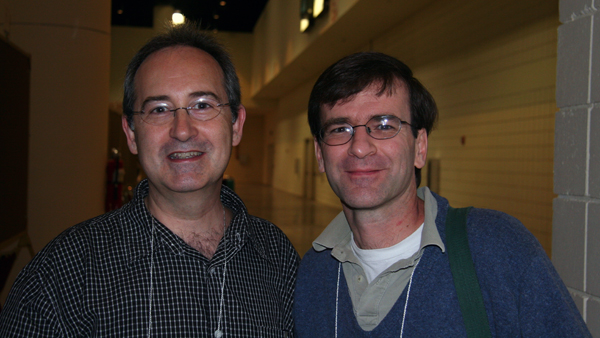 I also met with my friends from Stanford at a wonderful little restaurant called the Greek Islands Taverna. The lamb was delicious, the fish was extraordinary and the Greek wine was most acceptable. We talked about further collaborations, ate more food, drank more coffee and talked some more about vision, vision rescue, food, families, language and more. It was a most enjoyable evening. 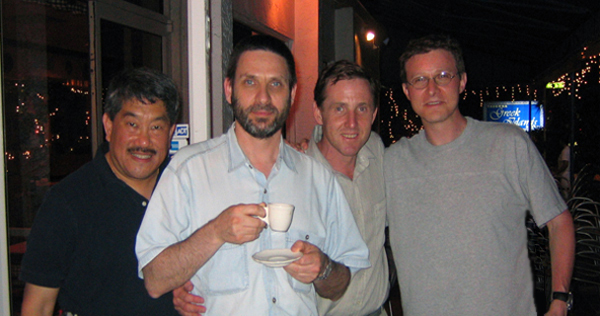 As for that pesky cold…..I know exactly when I got it, sitting in a cellular imaging talk and the guy behind me clearly with cold. I was getting ready to move when there was a cough followed by a fine moist mist on the back of my neck. Ugh….. I went straight to the bathroom to wash the back of my neck. The next day, I awoke with a slight irritation and rawness in the back of my throat and 24 hours after that I was under full assault with my whole skull seemingly involved. The next day it moved to my chest with elements that appeared to be from a bacterial lung infection which prompted a call to obtain a Zithromax Z-pak. It was good I got it because of the flight delay which might have been much more unpleasant with a raging chest infection, but it is good to be home. 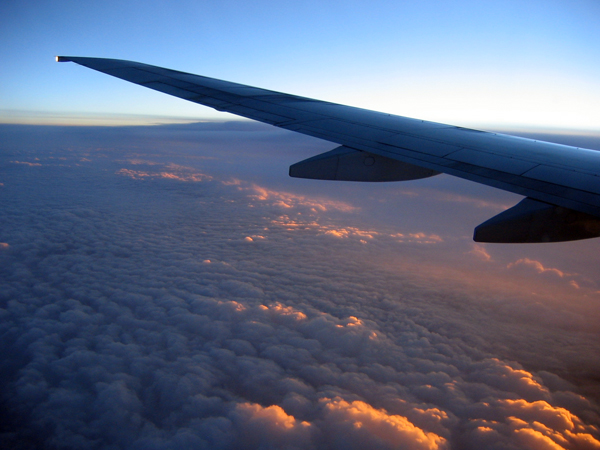