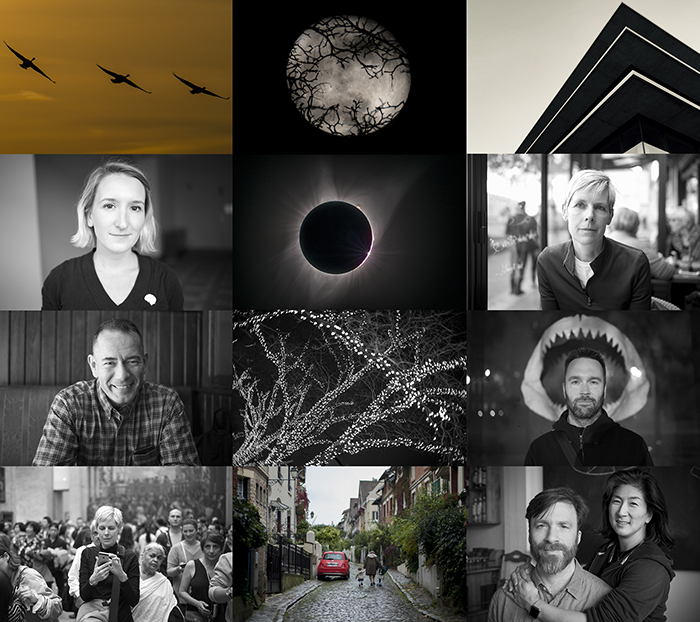 This is my now traditional New Year’s post, written in the late hours of December 31st, sipping something delicious while waiting for Midnight.  Like previous years summaries, this entry is a bit of a year end summary and a selection of my best photographic efforts for the year that reflect where the year has taken me.

The last three years have been increasingly difficult, culminating in 2017 being the absolutely most difficult year of my life, for many reasons. The hits just seemed to keep coming, from losing my Grandmother and then Ted who died this year, giving up on the adoption search, to losing Poppy unexpectedly, having my friend and mentor, Robert Marc retire from science to develop Stray Arrow Ranch, along with the continued struggle for science funding, all while watching a continued and relentless assault on democracy in the United States of America has made for an almost universally challenging year. So many people have struggled this year due to circumstance, weather and with personal loss.  I grieve for them and their families and have tried to help improve things just a bit for them.  Friends were displaced from their homes because of hurricanes, others have left science due to funding issues, while others still have closed businesses and dealt with financial crisis.

I do feel fortunate however to still be in the science game, even though it has meant grueling work trying to constantly write grants and keep the lab fully funded which conspired to keep me from fully enjoying the process of science.  On top of that, travel has been far more frequent that I would have preferred with trips to San Francisco in February as well as an insanely fast trip to Beijing. Trips to White Plains and Manhattan, Virginia, Baltimore and Washington D.C. in April and May. Back to the Bay Area in August for SciFoo. Detroit was in September, and back to San Francisco in October, followed by Paris soon after, and finally back to Pittsburgh to give a talk, back to D.C. for SfN, Park City for FireConf where I met Rob Shearer and Joseph Smarr, and one last day-trip to Cupertino to see dear friends and my god-son.

There have been some bright spots. My dear friend Duncan had a bit of a scare, but is healthy and well.  All the hard work of writing grants is starting to pay off, I hope.  We did earn an R01 grant for retinal remodeling, and it looks like we’ll get another R21 grant in 2018 to do modeling of connectomics data for bionic implants.  We are waiting to hear on our big grant, a retinal circuitry grant which has been a mighty struggle, have submitted another R21 with a colleague for automated segmentation of transmission electron microscopy datasets, have another possibility for funding of multiple sclerosis research that I cannot talk about yet, have two other collaborations with friends at NIH that we are in discussions with, and I’m working on an international consortium for a crazy idea that also cannot be talked about yet.  We have a great team in the lab and I look forward to seeing what we can do in 2018 together.

On a personal note, H and I have had two tortoise shell cats, Alice and Ellie join our household and upend everything.  There is nothing that goes without their notice and they mess with all of it.  We love them dearly.  H and I took our first balloon trip which was amazing, saw the total solar eclipse which was life changing, went to Paris together for a wonderful visit, and were blessed enough to have taken a week off for the Christmas/New Year’s holiday to recharge and look forward to a year of hopefully, a fully funded lab which will allow me to immerse myself completely in the science.  The travel schedule is also already looking to be full with trips to Chicago, San Francisco, Sydney, Melbourne, Nagoya, Honolulu, and then Greece and Ireland in the works.

Photographically, I’m not sure where 2018 will end up.  I made a commitment a couple years ago to photograph more people, and it has been encouraging to see where that has gone.  I don’t have a photographic plan for 2018, other than to try and slow down to be more present in the photographic moment.  Also, I want to push fovi8 harder…  Go check it out.  It is awesome.

As the last few minutes of 2017 tick down, I want to use this time to be thankful and reflect on what all our friends and family mean to us.  I love and am grateful for each and every one of you, and for the role that you’ve played in our lives.  I hope that we can come together as a country in 2018 and reduce some of the partisanship and strife that have done some much damage this year.  As Martin Luther King Jr. said “We may have all come on different ships, but we’re in the same boat now.”, so we might as well get about the business of working together.

Onto the selected images from 2017… It is interesting to me that most of the images that ended up being my favorites were those made later in the year, after I had managed to deal with some of the most stressful and difficult periods.  So that trope about suffering for your art?  It’s B.S…. stress is not good for art.  The mix of images continues to evolve with one image this year being made with a smart phone (iPhone X), two images being made with Fuji X-T2 cameras and long lens combinations, two images made with the Fuji X-Pro2, five images made with the Leica Monochrom and a 35mm lens and one image made with the Leica SL and the 50mm Noctilux. 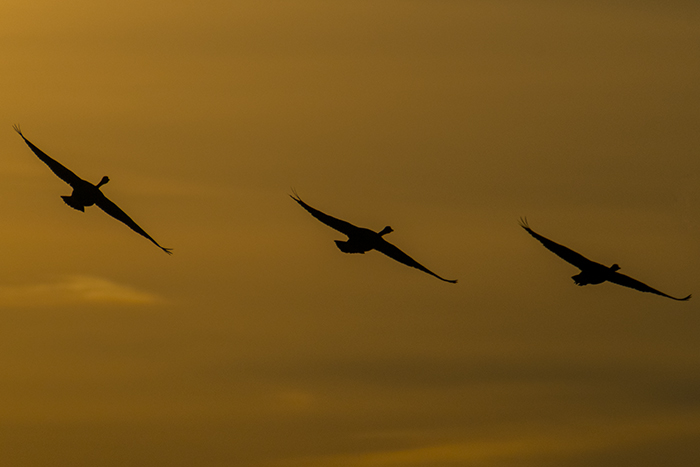 This image of Canada geese flying West at sunset was a fortuitous image shot over the Salt Lake City valley, and only made possible because of a very long lens combination.  Even though it is a ~1200mm equivalent combination, it is a light enough and yet sharp enough lens/camera combination that I carry it with me from time to time back and forth to work in case something like this happens. 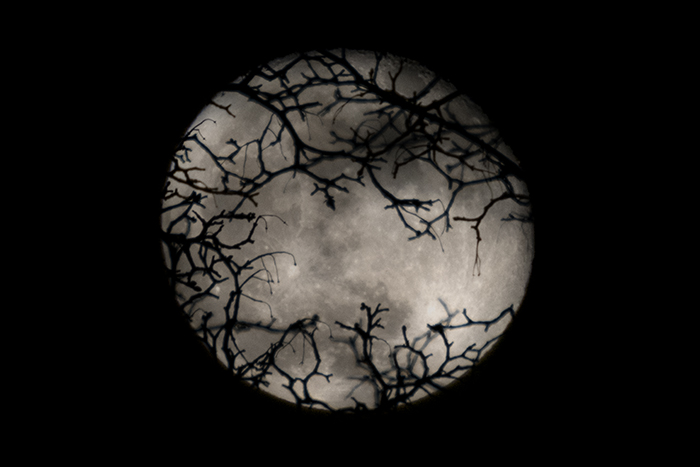 I photograph the moon quite a bit… perhaps too much.  There is lots to take in there and I wonder if anyone is doing change detection on the moon over the years.  That said, I saw the moon coming up on this night and initially was not planning on shooting it, but watched as it rose through some tree branches which was enough to make me run in the house and grab the camera to make this image composite. 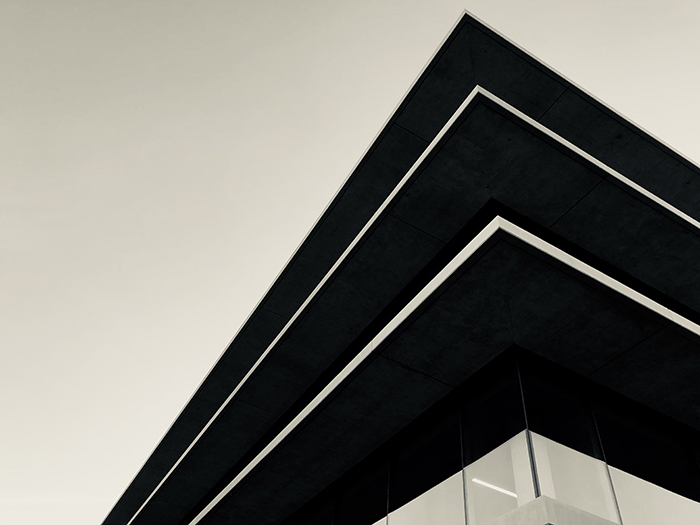 This image of Tantau 9 on the new Apple Campus was made during a crazy day trip from SLC, UT to Cupertino to meet up with dear friends who I am happy to report are all healthy and well.  I love you guys.

This photo was made with the iPhone X and totally makes me want to spend a few days just walking the Apple campus with cameras, doing architectural photography there. 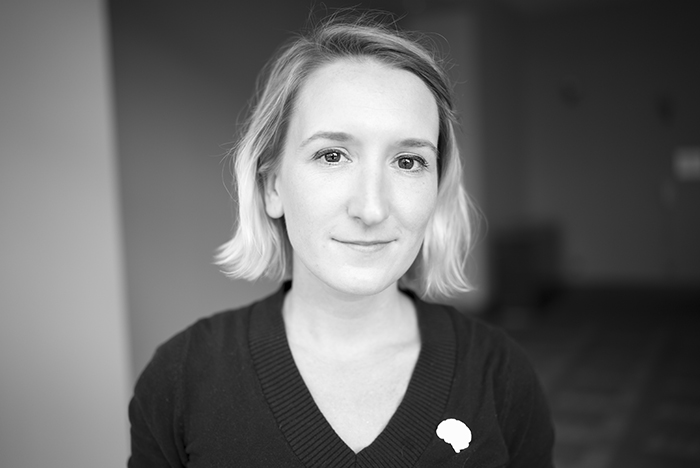 This image of my friend Crystal was made as part of a personal project that I hope will see light some time very soon.  Crystal was kind enough to stop by and be patient enough to participate, allowing me to tune some of the parameters of light for the particular space we were in.  This photo was the first to come out of that project. 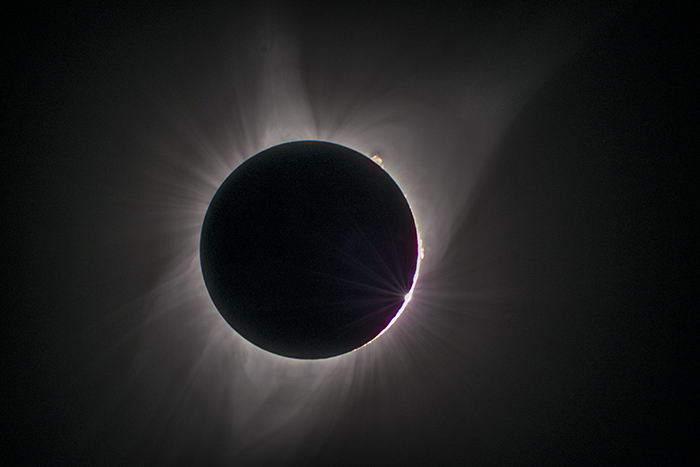 This image documents perhaps the coolest natural phenomenon I have ever experienced.  H and I had initially planned to watch the partial eclipse from SLC, UT, but fortunately made the decision to drive North and risk insane traffic getting to/from a viewing place.  I cannot begin to describe the feeling and am grateful for the opportunity to have experienced it. The interesting thing about this image is that is almost did not happen.  We were dumbstruck at the event, and H said: “I thought you were going to photograph it?” which shook me out of my stupor enough to grab a camera and lens, shooting the event just as the sun started peeking through the mountains of the moon. 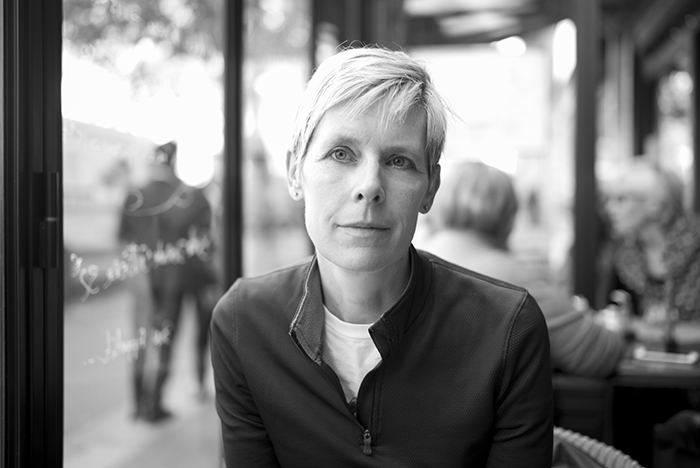 This image of H was made after sitting down to a meal at a cafe in Paris on a day of walking the streets to see what there was to see.  I love it for so many reasons, but represents perhaps to me, a simple vignette, capturing a place and time. 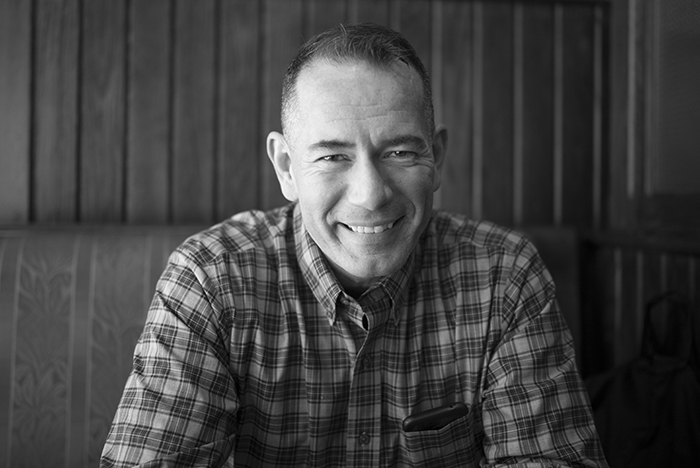 All of my favorite photos this year were those that were made when I had a moment to enjoy the moment.  It is somehow better when I can meet with friends outside my normal ebb and flow of everyday life.  This image of my friend Danny was made in Washington D.C. at a break in the SfN conference when we met for lunch. 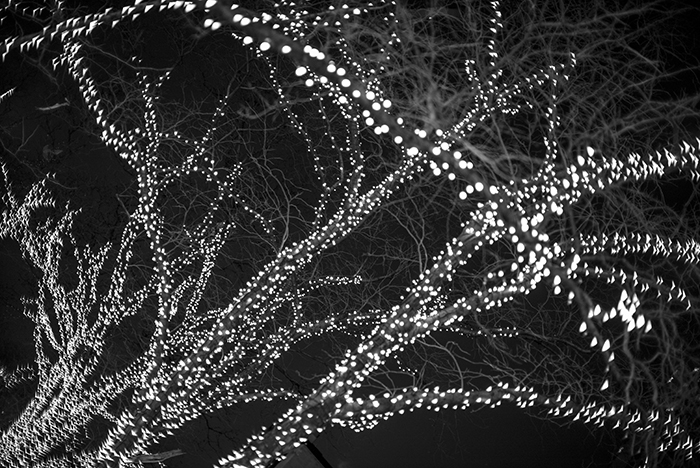 This image of trees was made in NYC after spending the evening with friends.  These trees were outside of their apartment building and they reminded me of neurons imaged through confocal or super resolution microscopy.  It was a non-traditional image of sorts, but it works for me as an abstract image. 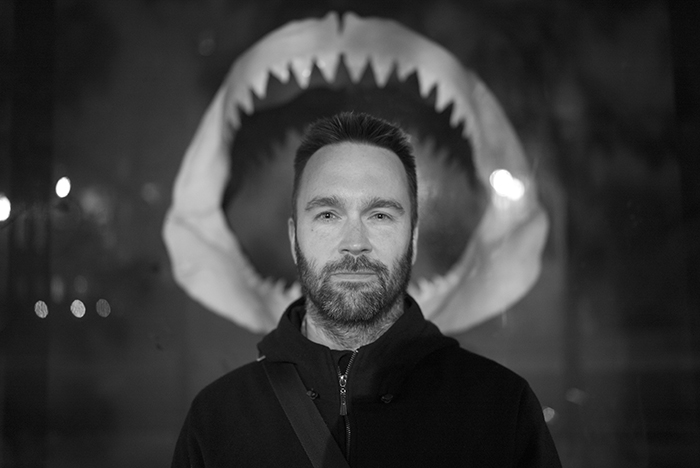 This image of my friend Jason was made around 1am in front of the headquarters for National Geographic in Washington D.C..  Jason and I get together once a year or so at the SfN meeting and have a walkabout with cameras.  Again, the best images are made when you can dedicate some time to relax and have some fun. 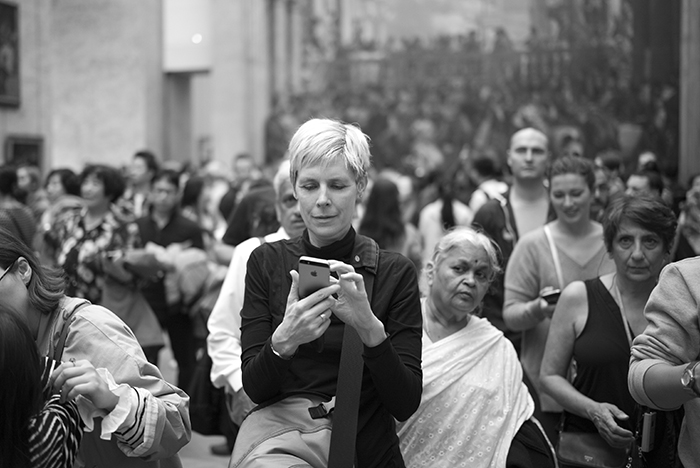 This is perhaps, my favorite image of the year made inside the Louvre of H in the room with the Mona Lisa.  It was incredibly crowded and rather than struggle to the front to see it, we stayed in the middle to simply take in the moment.  At some point, I turned around and fought my way back a few feet to capture H sending her sister a text saying she was “admiring the Mona Lisa with 65,000 of our fellow humans”.  The woman peeking out from behind H made the image complete. 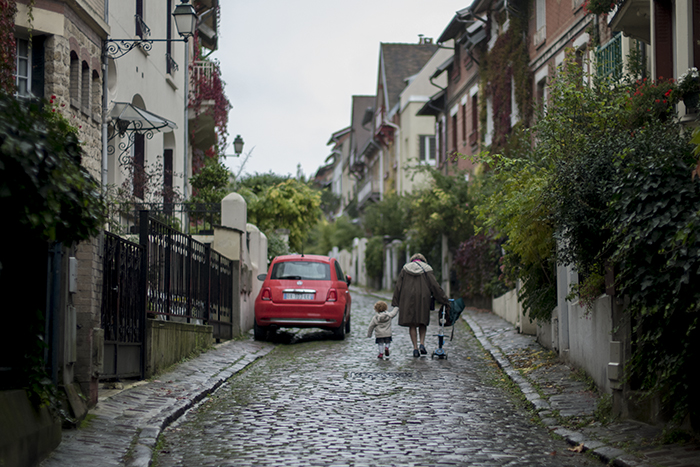 This image was made walking back from a break in some meetings, just doing some street photography.  This is the only image of my top 12 this year that I fought for.  I saw the woman walking this child up the cobblestone street and having only a 50mm and a 35mm lens with me, I *RAN* up the street as quietly as I could to get close enough to make the image.  I had hoped they would continue further up the street past the car to get just the isolation of the figures for a more timeless scene without the automobile, but it was not meant to be.  Still… I loved this image as a snapshot of life. 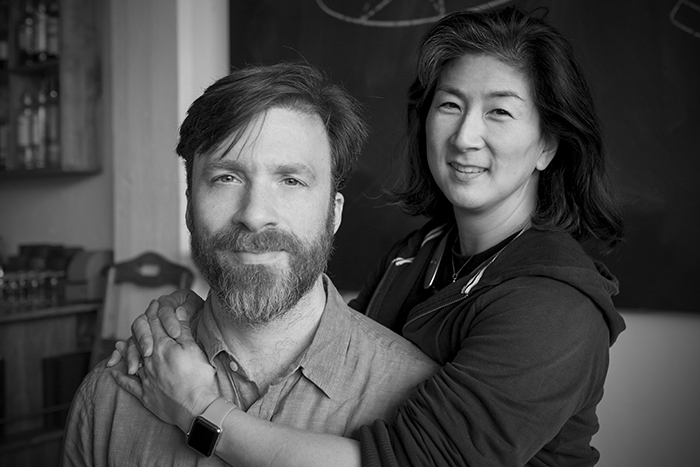 This image of dear friends Dallas and Katherine was made in The Long Now, on one of the many visits to the Bay Area this year.  I loved this image for the happiness and serenity.  The light was just right, and so was the company.