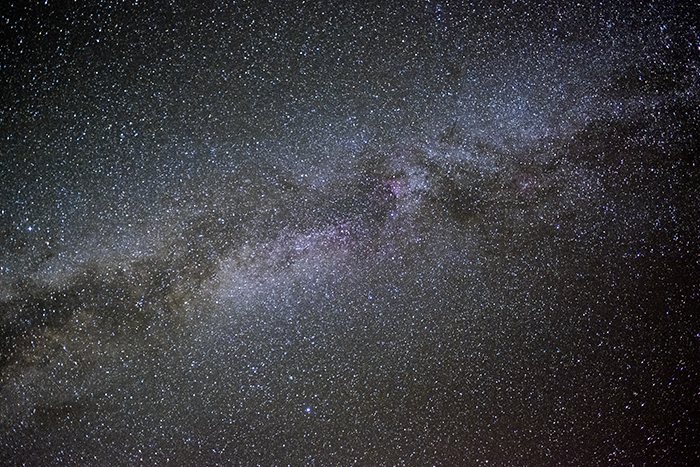 Last weekend I found myself down at friends, Robert and Ann‘s Stray Arrow Ranch which is in one of the most amazing dark sky areas of the country.  I had recently picked up the Fuji 16mm f/1.4 R WR lens and wanted to try it out for a quick astrophotography experiment.  This was not an ideal view of the milky way with a perspective showing the galactic core and since I did not have any guiding equipment with me that would match the rotation of the Earth, I kept the exposure to 20 seconds to minimize star trails.  That said, I am impressed with the performance of this lens using the stars to reveal the sharpness of  this lens.  Check out the full resolution image here to look at the image details.

These are the kinds of images that inspire wonder and amazement.  You can see dark areas, bright areas and even the purple of nebulae in this shot.  I can’t wait for the next step in the Fuji astrophotography experiment with longer lenses and guiding equipment which will allow increasing the exposure time.  I’ve also got a new infrared X-T1 on order, so whenever that ships, I’ll be able to check out some of the other wavelengths visible from the ultraviolet to the infrared.

Interestingly, we also noticed a point of light that dramatically increased in brightness.  We saw this will our own eyes and luckily, I had been doing a jpg capture of the scene as a calibration.  I have no idea what this might have been and some speculation on Twitter suggested it might have been a satellite that caught a reflection which is possible I suppose.  I don’t have any better explanation for what it was…

Update: I enhanced the imagery a bit more and you can see the trail of a satellite that comes before the flash and after.  Looks like the speculation that it was a satellite catching a reflection of the sun was right.

One Reply to “Milky Way”