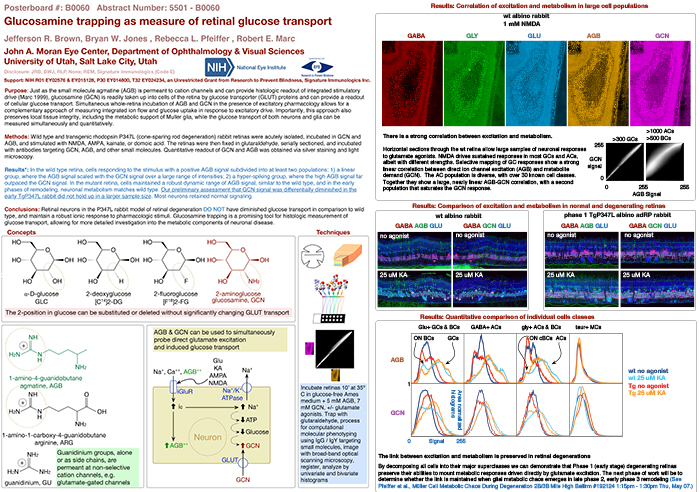 This abstract was presented today, May 7th at the 2015 Association for Research in Vision and Opthalmology (ARVO) meetings in Denver, Colorado by Jefferson Brown, myself, Rebecca Pfeiffer, and Robert Marc.

Purpose: Just as the small molecule agmatine (AGB) is permeant to cation channels and can provide histologic readout of integrated stimulatory drive (Marc 1999), glucosamine (GCN) is readily taken up into cells of the retina by glucose transporter (GLUT) proteins and can provide a readout of cellular glucose transport. Simultaneous whole-retina incubation of AGB and GCN in the presence of excitatory pharmacology allows for a complementary approach of measuring integrated ion flow and glucose uptake in response to excitatory drive. Importantly, this approach also preserves local tissue integrity, including the metabolic support of Muller glia, while the glucose transport of both neurons and glia can be measured simultaneously and quantitatively.

Methods: Wild type and transgenic rhodopsin P347L (cone-sparing rod degeneration) rabbit retinas were acutely isolated, incubated in GCN and AGB, and stimulated with NMDA, AMPA, kainate, or domoic acid. The retinas were then fixed in glutaraldehyde, serially sectioned, and incubated with antibodies targeting GCN, AGB, and other small molecules. Quantitative readout of GCN and AGB was obtained via silver staining and light microscopy.

Conclusions: Retinal neurons in the P347L rabbit model of retinal degeneration have diminished glucose transport in comparison to wild type, despite maintaining a robust ionic response to pharmacologic stimuli. Glucosamine trapping is a promising tool for histologic measurement of glucose transport, allowing for more detailed investigation into the metabolic components of neuronal disease.

Layman Abstract: This project describes a new technique of using glucosamine to measure how effectively cells in the retina will absorb glucose when they are stimulated. Glucosamine is a molecule very similar to glucose, so cells are tricked into absorbing it when they are looking for energy. Our project shows that in retinas that are diseased, cells can still be stimulated but they don’t absorb glucose as well as healthy cells do. We believe this technique will help us in the future to better understand why cells stop functioning properly in common retinal degenerative diseases.