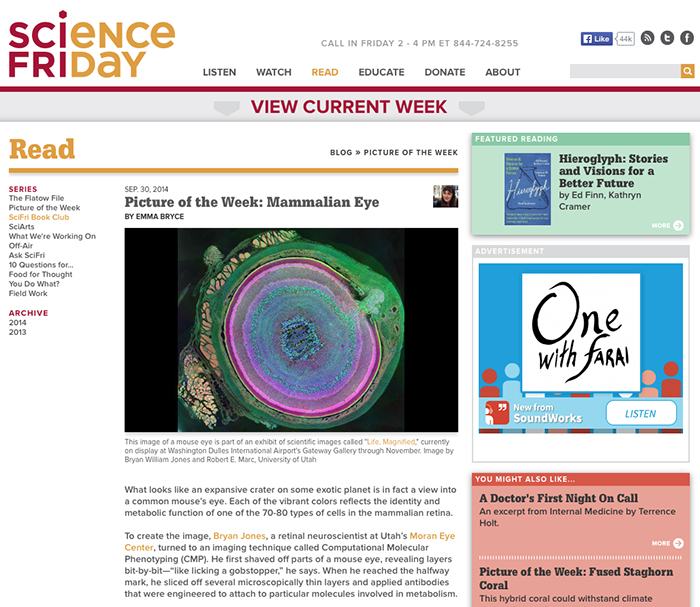 As my colleague Virginia said earlier today, “For NPR nerds, it doesn’t get much better than “Science Friday”.

Our Metabolomic Eye image has now been featured on Science Friday as the Picture of the Week with an article written by Emma Bryce.  Science Friday is one of my long time favorite NPR programs hosted by Ira Flatow and does an amazing job of communicating science to the wider general audience.  This is a role that is desperately needed right now as the lack of science funding is increasingly threatening to put the US and indeed the global science population behind where it could be.

The thing to remember is that science funding in this country has failed to keep up with competitive grown in the US for over two decades now, starting in 1991.  Even this morning, it has been announced that the NIH is operating under a Continuing Resolution, with research funding at levels *below* the most recent reduced funding levels.  Additionally science funding as a percentage of the budget has shrunk from over 10% to less than 6% currently, and while funding is dramatically contracting here in the US, other countries like China have increased their spending on basic science by over 300%.  At the same time, a bill is being proposed in Congress that would dramatically cut funding for the National Science Foundation and require scientists to obtain “permission” to write grants.  This bill is supported by the House Committee on Science Space and Technology, chaired by Lamar Smith (R) who wants to take funding decisions away from scientists and is politicizing the science review process.  Notably, a number of the Congressmen on this House Committee on Science Space and Technology, including its chair Lamar Smith are proudly anti-science.  Parul Broun (R) has declared that  “All that stuff I was taught about evolution and embryology and the Big Bang Theory, all that is lies straight from the pit of Hell.”. Jim Sensenbrenner (R) has claimed that the Earth is cooling despite all scientific evidence to the contrary and then he claims that even if the world is warming, crop yields will go up, making it “easier to feed 7 billion people”. He also does not believe in the influence of genetics on biological processes.  Dana Rohrabacher (R) actually believes that climate change research is an active and massive conspiracy being perpetrated by scientists on the public and says that “CO2 is irrelevant”.

If we as a society do not fight the politicization of science when it comes to the science of climate change, then what comes next? Genetics? Medicine?  The role that public education programs like Science Friday plays in our society is critical to educating and creating an informed public that will expect more from our leaders.

What can you do to keep America competitive in science and technology?  Vote.  Contact your representatives and senators and tell them to support science.  Most of all, expect more from our lawmakers because what most people don’t realize is the time constant for science, education and technology investment and payoff is longer than 4 year election cycles or even 4-5 year grants and every advance builds on the ones before it.  For instance, the Internet is based on basic research investments made 40 years ago…  Think about that for a while.  The same is true for medicine as the major advances in medicine, vaccines, anesthetics, antisepsis, clean H20, antibiotics and antivirals, surgery, and radiology were all built on investments made almost 100 years ago or more.  Science, engineering and education are long term investments. They provide the basis for benefits beyond election year cycle time constants.