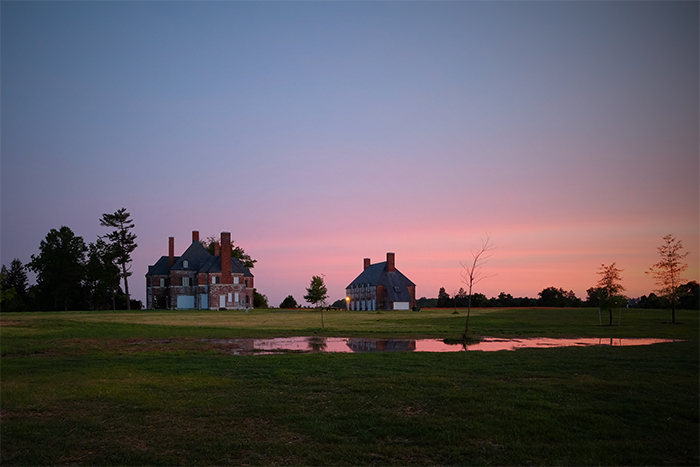 We had apparently missed most of the fireflies by a couple of weeks, but walking the grounds in early evening at Janelia was rewarded with more than a few of the glow bugs as the sun set, reminding me of my childhood in Texas.  Those fireflies we used to catch as kids were I’d like to think, the kernel of wonder that eventually inspired me to want to study biology.  We’d catch those fireflies in Mason jars and hold them while sitting under the Old Man, a huge old oak tree as the sun went down.  We’d argue with each other with the same fascination that ancient humans must have about just how they made that light.  Of course as 12 year olds back in 1982 on the edge of Ft. Worth, we certainly had no idea what luciferase was, but when the gene for luciferase was cloned in 1985 by Marlene DeLuca, there was a news blurb on it up at the medical laboratory building where my parents worked with some commentary about how it might be a new tool for biological research.  I did not understand it fully then, but it was an explanation that summarized her work into the basics of just how the fireflies made that magic light using ATP, O2 and luciferin.

Unfortunately, Dr. DeLuca just two years later died in 1987.  She was far too young, but the work she did on luciferase was some of the most amazing basic research that helped to not only explain how one form of bioluminescence worked, but also provided a set of tools for future biologists to continue exploring very different biological questions using tools based on Dr. DeLucas work years earlier.

This kind of research into basic science questions and the creation of new biological tools to investigate wide reaching questions in biology is the spirit of work that happens at Janelia.  It is an amazing place that I’ve written about before and one that is helping to advance our understanding of biology and biomedicine.  It is easy to get trapped into thinking that translational biomedicine and research that is immediately directed at solving human disease is the only important kind of research we should be funding.  But as has happened again and again, it is the basic research like the early transgenic research by Mario Capecchi that helps us to get the big insight into how biology works and more often than not, it is the basic research that gives us the tools we use to develop the translational medicine that does lead to therapies and cures for disease and pathology.

There are so many questions in science that and bioscience that need answering.  There are a few that I’d like to answer yet, including ones on how much plasticity there is in adult neural/retinal tissues and what the mechanisms of plasticity are and even questions on the evolution of retinas and where certain neural circuitry comes from.  But there are even grander questions that are still outstanding in biology that need answering including just how the golgi apparatus work or even questions about how Monarch butterflies migrate.  The trick is, you never quite know how to predict what we will learn and from where.  Research and the knowledge gained from it is an inherently non-linear process, even though we apply linear practices to it.  All you can do is find the right people and provide the funding for them to explore and find answers to the questions around us.  So, next time you see something in the world that makes you stop and wonder, think about how we got there.  With many of the stories, the answers will surprise you.

The buildings above are the old farm house and carriage house for the original farm that I wrote up in an entry here.