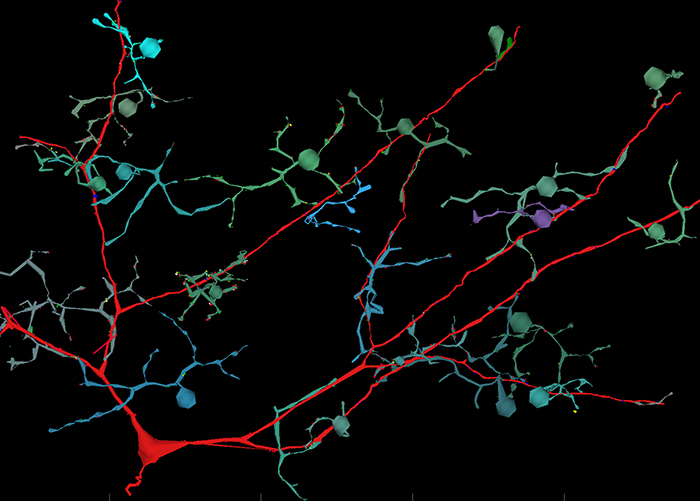 Purpose:  In theory pure feedforward amacrine cells could exist, but no proof of has ever emerged. We mined 100 GABA+ ACs (γACs) and glycine+ ACs in rabbit retinal connectome RC1 (Anderson et al., MolVis, 2011) to establish the existence, connectivity and statistics of feedforward inhibitory elements.

Results:  We discovered a single class of γAC that is exclusively feedforward. The interstitial AC (IAC) is a GABA+ cell with its soma positioned directly in the middle of the inner plexiform layer (IPL). One instance of the IAC is cell 9769 in RC1. Its soma is located at the edge of the 0.243 mm diameter volume and its dendrites span the volume, suggesting the full cell is over 0.5 mm in diameter. It receives input from virtually every ON cone BC (CBb) it encounters including classes CBb3, CBb4, CBb5, CBb5w and CBbw. Cell 9769 is postsynaptic to 31 CBbs at 75 ribbon synapses and is presynaptic to none of the them. Cell 9769 is presynaptic to several wide-field ON cone feedback and cone-rod crossover γACs and two classes of ON GCs. It is also coupled to a large GABA+ GC. No other kinds of pure feedforward ACs have yet been found.

Conclusions:  IACs are very large cells that appear to have the role of copying the entire ON cone BC signal pool (via sign-inverting GABA synapses) forward onto a select set of ON driven targets, including two classes of retinal GCs. IACs also provide nested feedforward to feedback γACs. IACs tile rather than cover the image plane, so they may effectively measure the size of looming background structures and provide a framework for spatial and temporal antagonism that can refine the effects of feedback γACs. They are also coupled to a third class of GABA+ GCs and may transfer a very large aggregate sign-conserving, but non-amplified ON signal.