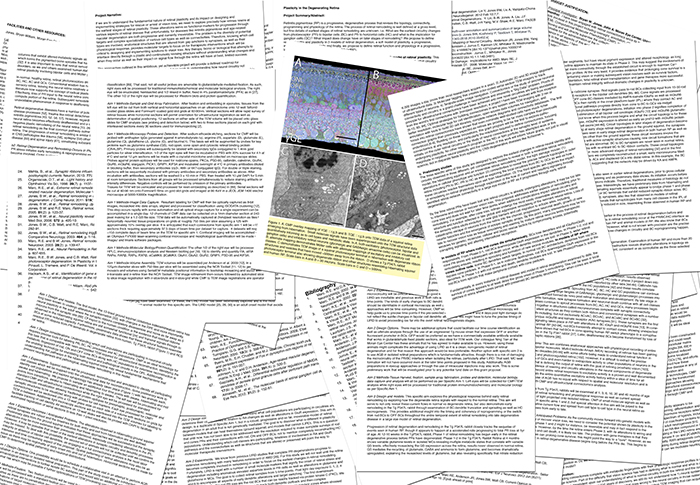 Its done.  The NIH RO1 grant that I’ve been working on for the past while is completed and has been sent off to our office of sponsored projects.  From there it will go to the NEI at the NIH for merit review which happens in October to November and if its good enough, it will go to Advisory Council in January where they’ll make a decision on whether to fund this or not.  If its thumbs up, it will be funded in April.

This grant should it be funded, will help to understand the fundamental nature of how retinas degenerate in blinding diseases like retinitis pigmentosa (RP), macular degeneration (AMD) and diabetic retinopathy by using a set of tools called connectomics approaches and computational molecular phenotyping (CMP).  The business of connectomics is attempting to understand how neural systems are wired together and one of the pioneers of connectomics, notably retinal connectomics is our Director of Research, Robert Marc here at the Moran Eye Center.  We’ve been working for the last few years to use connectomics and CMP to understand how the retina is normally wired.  It turns out that retinas are like little parallel supercomputers at the backs of our eyes and connectomics teaches us how those supercomputers are connected and constructed.  Retinal disease alters the wiring in those systems, changing forever how information is processed through them.  This has substantial impact for how we rescue vision and vision loss and it affects a large number of people.

Of the Americans with advanced macular eye disease (1.7 million), diabetic retinopathy (4 million) and other rewiring retinal degenerations, over 2.4 million are blind or severely impaired.  If we can uncover the exact nature of these and other rewiring anomalies, we may be able to better understand how to ameliorate them for the first time in the history of medicine.

Wish me luck on this as the current funding climate, particularly for junior scientists like myself is pretty brutal.  2013 is being called “A bad year to have a good idea” as the NIH has 20% less buying power than it has over 9 years ago.  Its a pretty complicated issue, but the fundamentals are that investments in science and education are some of the best investments this country has historically ever made.  Those investments have given us aspirin, airplanes, vaccines, antibiotics, transistors, clean water, new battery technology and the Internet to name a few choice selections.  In short, investments in science and technology fundamentally change and improve our lives and if you want these sorts of payoffs, there has to be an investment.  Unfortunately, even though people agree that funding things like research into blindness and cancer are good things, there is some resistance to funding this work at the appropriate levels and partisan bickering is slowing that discussion down even further.

Make no mistake, I love science even though it is the most brutally hard job I’ve ever had.  But we as a society cannot keep funding science at reduced levels if we want to both 1) keep young faculty in science and 2) take advantage of the benefits of science personally, medically, technologically and economically.  The reality for most scientific projects is that interruptions are lethal to the project.  So, for science to work, we need consistent funding levels to allow science to progress without interruption.