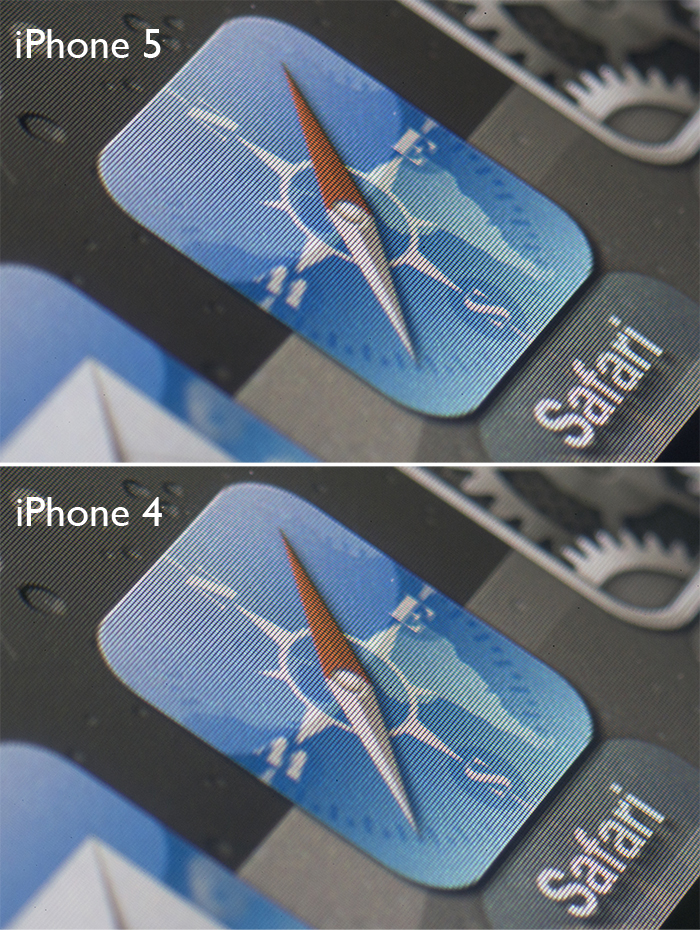 I always raise my eyebrows just a bit when it comes to marketing, but the last time Steve Jobs invoked the Retina Display moniker, the vision scientist in me checked to see if his claims held up and sure enough, they did.  This time I was not so concerned withthe technical details of Apple‘s marketing claims, but was more interested in seeing if the displays, viewed up close could be distinguishable between the new iPhone 5 and my older iPhone 4.

I’ve been looking at the pixels in the new iPhone 5 over the last few days and it really is a higher quality display than the Retina Display in the iPhone 4.  Subjectively, looking at the display there is more contrast, the blacks are blacker and the colors are more intense.  The iPhone 4 display is very, very good.  So, would the iPhone 5 display be appreciably better?  Anyone can subjectively look at photographs and when you do, you can tell that there is more vibrance, but I wanted to get closer by inspecting the pixels in a stereomicroscope.

I took both the new iPhone 5 and the older iPhone 4 and placed their screens on maximum brightness, then imaged them with the same settings with my stereomicroscope and a Canon 1D Mk III camera.  Magnification was held constant in all captures.

The image above gives you some idea for the two displays, but what is more difficult to appreciate from these 2D images is that the pixels in the iPhone 5 are closer to the surface of the glass than in the iPhone 4.  This is because Apple has integrated the touch sensor into the display and not layered it on top of the glass.  Its hard to appreciate the depth of the pixels without a 3D image that you can move around, but the iPhone 4 pixels are appreciably deeper in the display and thus further away from the surface than they are in the iPhone 5.  The iPhone 4 made a huge jump in pixel distance from the glass surface from the iPhone 3, and while this is not such a huge jump in distance as the iPhone 3 to 4, the results can be seen even without benefit of 3D viewing, particularly in the black or dark regions of the display. 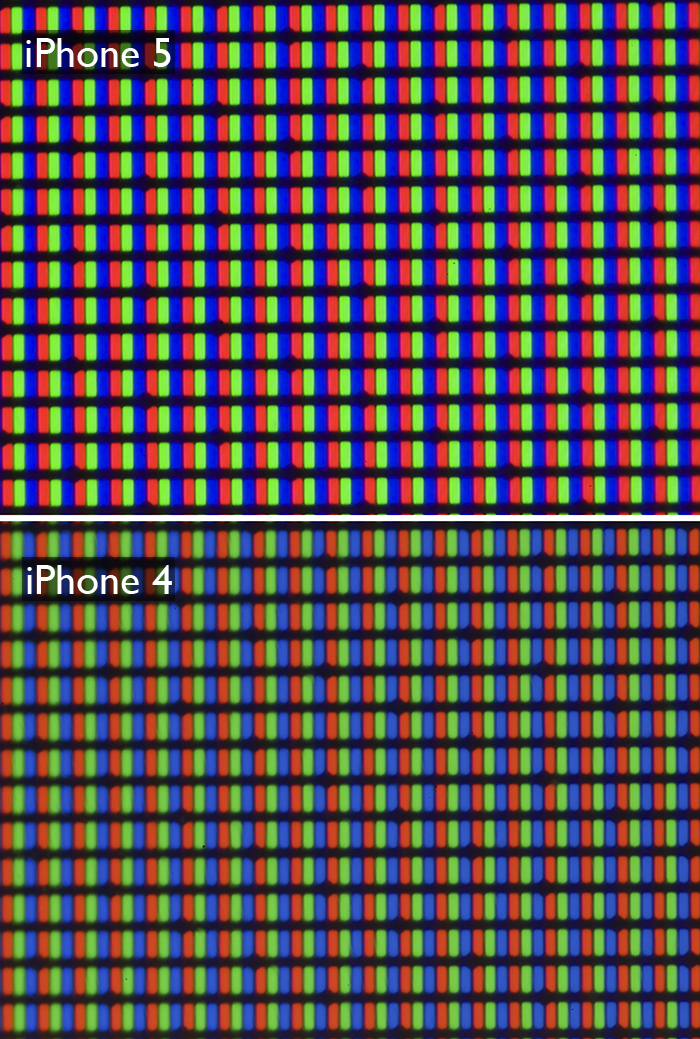 Interestingly, it almost looks like the *shape* of the pixels in the new iPhone 5 are a little crisper as well.  The edges of the subpixels seem more squared in the iPhone 5 than in the iPhone 4.  It would take a more powerful stereo microscope than I have to truly quantify the shape differences.  These sorts of things seem small at the micron level, which is the scale that we are talking about, but they really do end up making a big difference in perception.  And if you are spending huge amounts of time with a device, like you do your phone, that level of detail ends up being a big difference in eye strain and fatigue.