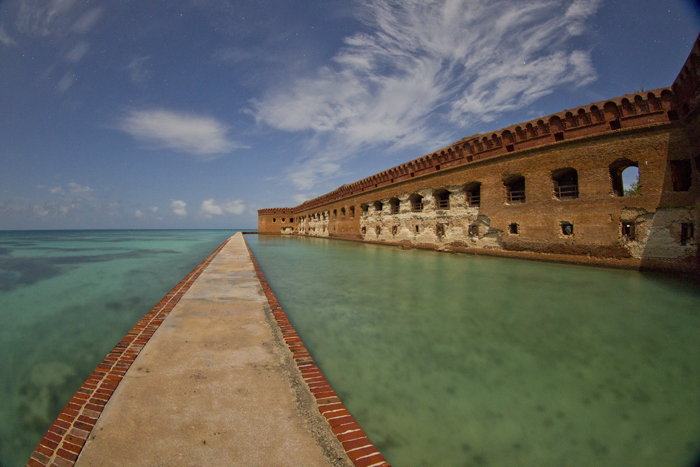 The plan for some time was to go out to Ft. Jefferson and do some night photography, but what I had not counted on was a *tremendously bright* moon.  Just two days after our visit to the Dry Tortugas was the Supermoon which essentially wiped out all hope that I had for seeing stars underneath a lightless Caribbean ocean.  So, while I was expecting a bright moon, upon exiting my tent at 2am, I was not quite prepared for a moon this bright.

The moon was stunningly bright, so with 25 second exposures, it almost looks like daylight.  The other amazing thing about shooting out here at night was the sounds of birds calling from above in the night sky.  I could not see them and was hoping that one of them might show up in the longer exposures, but I could not find them in these images.  I could hear them though which really surprised me as I thought most birds were photopic animals that did not operate much nocturnally.  Granted there are the night herons which have both rod and cone photoreceptors, but it surprised me nonetheless.

With the exception of the birds above, the night was amazingly quiet.  The storms earlier in the day had blown over and the sea was almost completely calm with only a slight breeze to ripple the surface. 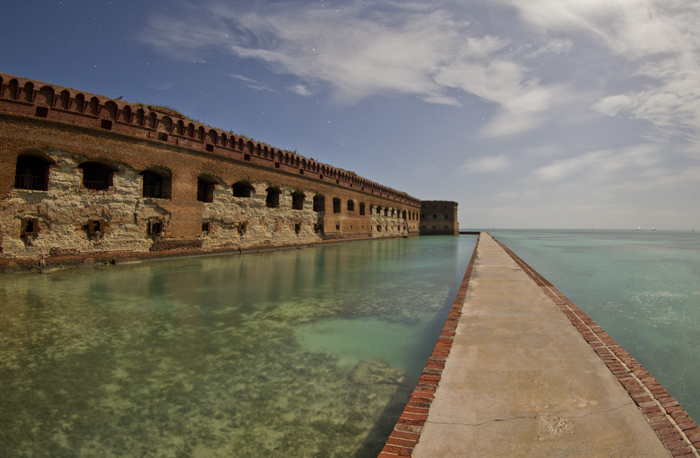 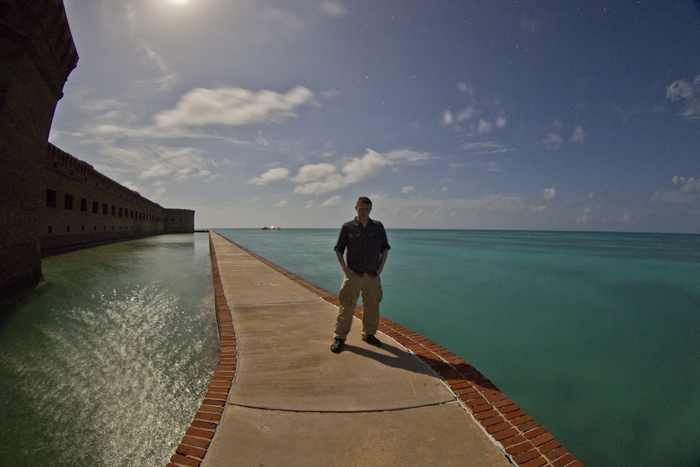 Some stars in the sky and strange shadows betray that these images are not made during the day.  Walking along the moat wall also revealed large shadows moving in the ocean just off the moat.  I *think* these were large grouper which also surprised me as I also thought they were diurnal hunters.  Of course they could also have been sharks as there are species of shark that hunt at night, though the shape seemed wrong.  I should have brought one of the underwater cameras and dropped it down there for some photos or just jumped in for some nocturnal snorkeling.  I did seriously consider it, but that would have required me to wake someone up for a swim buddy. 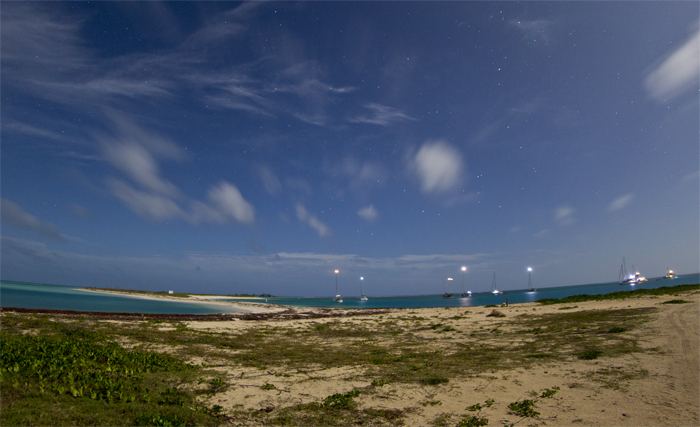 Walking out to the beach showed the sailboats in the harbor with their navigation lights illuminated.  The sea was almost completely calm with only a slight movement of the tops of the masts in the 25 second exposure. 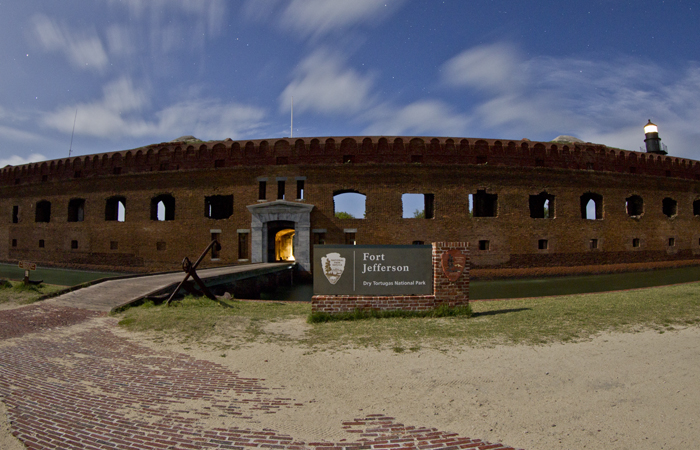 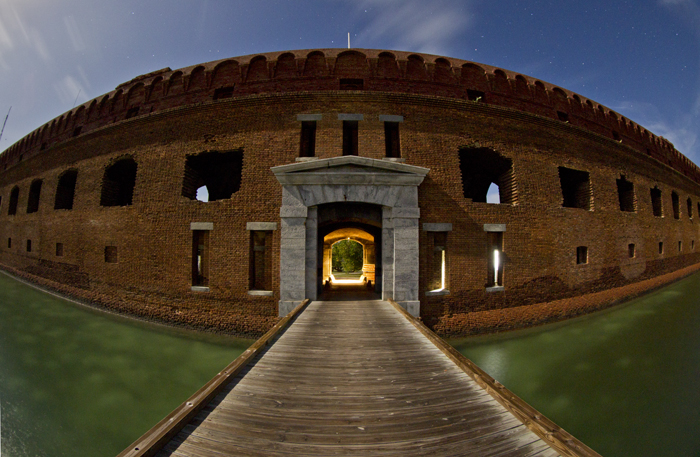 The fort itself is technically closed at night for safety purposes which really was too bad as I wanted to get some night photographs from inside the fort.  I had asked one of the rangers, a young guy completely loaded up with a Taser and a Sig sidearm out in the middle of the Caribbean if there were any way I could arrange to do some photography inside the fort and he got weirdly aggressive about refusing.  Oh well…  He seemed new to the job, but its too bad as it could have been interesting…  Though he was likely just keeping park policy. 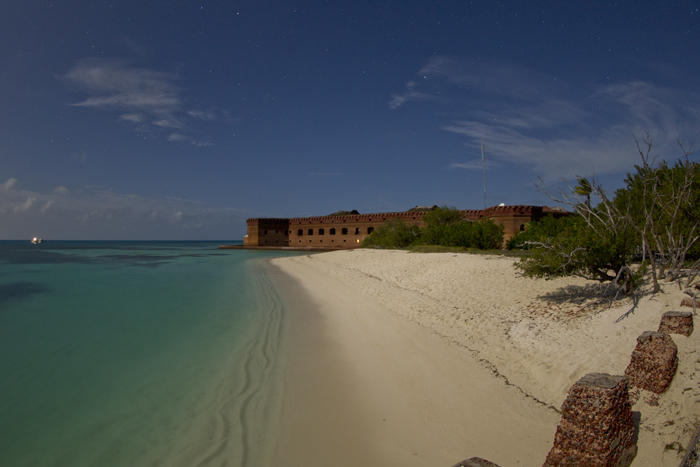 Walking out onto the beach did give me a bit of a start as I turned to see a *large* great blue heron, perhaps this guy, standing in the moon shadows of the trees.  He looked at me, I looked at him and he casually walked down the beach leaving me to recover my breath. 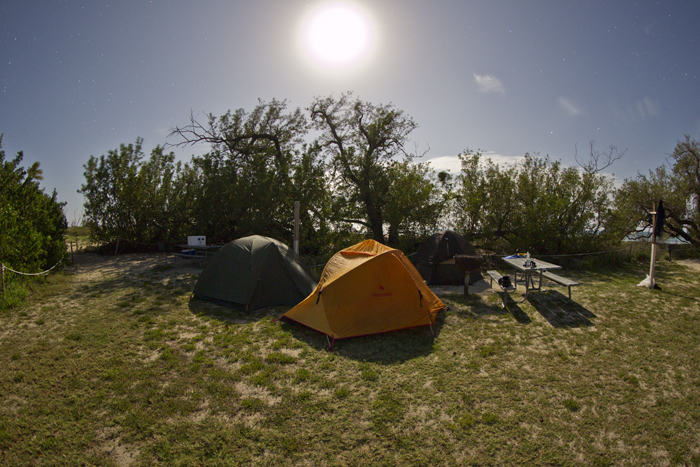 This was our little 3 tent camp.  It had rained pretty good earlier that evening which cooled things off some and made sleeping a bit more pleasant.  As it was, I was grateful that we brought tents as there was the consideration floated of just sleeping out under the stars…  Este paratus or “Always be prepared” ruled the day however and I was grateful for it. 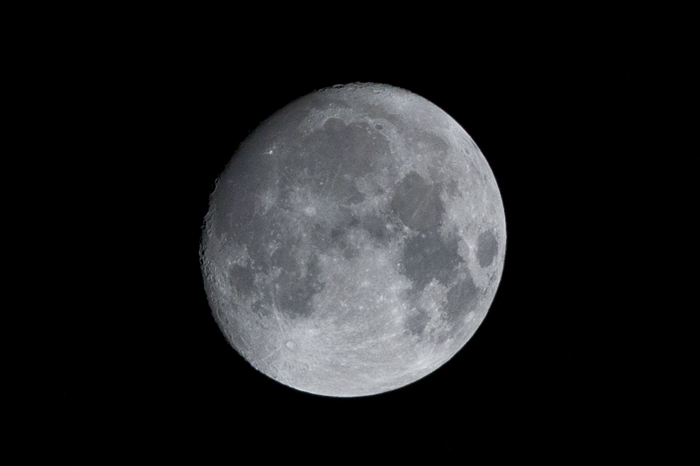 This was the moon that night which truly was amazingly bright.  To give you some idea, I used a 1/3200ths exposure setting!  Here are the settings that I used to capture this (cropped) image…

6 Replies to “Ft. Jefferson… At Night”