Purpose: Current tenets assert that the mono-stratified bipolar cells (BCs) of the mammalian retina require multi-stratified amacrine cells (ACs) to mediate ON-OFF crosstalk, since ON and OFF cone bipolar cell (ON CBC and OFF CBC) axonal arbors putatively occupy distinct domains in the inner plexiform layer (IPL). Nonetheless, recent studies demonstrated the capacity of BCs to violate the mammalian IPL stratification rules, manifest as a subset of ON CBCs with synapses in the OFF IPL, and a subset of OFF CBCs with primary axons longer than some ON CBC primary axons (Dumitrescu et al. 2009. Ectopic retinal ON bipolar cell synapses in the OFF IPL. J Comp Neurol; Hoshi et al. 2009. ON inputs to the OFF layer. J Neurosci; Anderson et al. 2011. Exploring the retinal connectome. Mol Vis). Our goal was to identify a suspected population of diffusely-stratified OFF CBCs (dsOFF CBCs) that infiltrate the canonical ON IPL, confirm the comingling of ON and OFF CBC synapses in the ON IPL with automated transmission electron microscopy (ATEM), and identify the targets of the dsOFF CBC synapses in ON territory.

Results: A subset of glycine-negative OFF CBCs diffusely arborize more proximally into the IPL than their OFF CBC cohorts, where they comingle with ON CBC axonal arbors. These dsOFF CBCs form reciprocal synapses with mono- and multi-stratified GABAergic ACs (γACs) and glycinergic ACs (GACs) at the same IPL depth as synapses formed by nearest-neighbor ON CBCs. γAC and GAC targets of dsOFF CBCs also form reciprocal synapses with glycine-positive ON CBCs.

Conclusions: dsOFF CBCs establish regions of mixed ON-OFF processing within the canonical ON IPL, where mono- and multi-stratified γACs and GACs facilitate within- and cross-channel inhibitory feedback. These results ambiguate the traditional IPL strata, legitimize partial dissolution of ON and OFF IPL segregation, and establish multi-stratified BCs as an additional means by which to achieve ON-OFF crosstalk in mammalian retina. 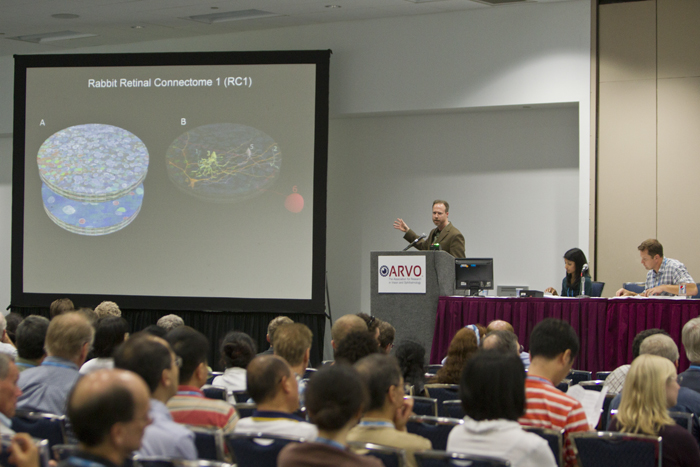