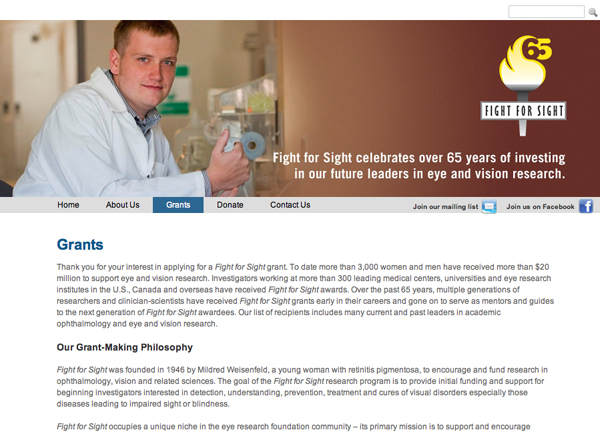 Drew Ferrell was awarded a Fight For Sight (FFS) grant when he was an undergraduate for which I made his portrait image.  It looks like FFS has used that portrait on the grants portion of their website. 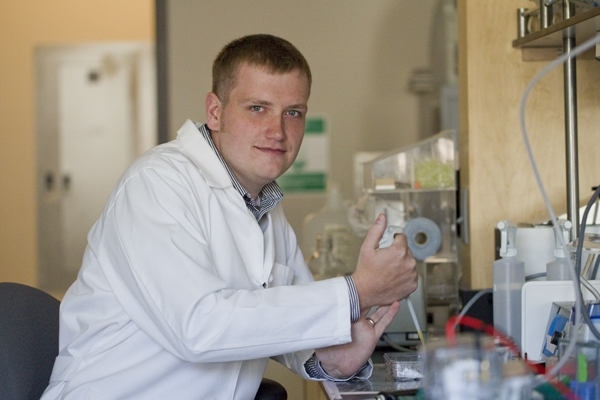 This was the original shot, with the portrait naturally illuminated with a large window behind the camera providing for a large, diffuse softbox appearance.  The day was rather overcast and slightly dark outside, but I wanted the large softbox effect.  So, the overhead fluorescent lights were shut off, I boosted the ISO to a setting that in the not too distant past would have meant unacceptable noise (ISO 2000) which was likely overkill given the reasonably quick shutter speed, but it worked.  Granted, bumping up the ISO is no excuse for not using a flash, but the large soft light source (big window) behind us resolved that problem.  I could have used a little fill light on the left of Drew’s face, but so many of these lab shots are overly processed so as not to appear real.  For anyone that has spent much time in a bioscience lab, the sparkly white lab coat is already a dead giveaway that this is a posed shot.

At any rate, back to technical details.  This image was shot with one of my favorite portrait lenses, the very much unappreciated for portrait work, Canon 100mm f/2.8L macro.  The lens is both wicked sharp, but has a nice standoff working distance and very little inherent distortion and when shot wide open, it nicely isolates the subject from the background with a very pleasing bokeh.