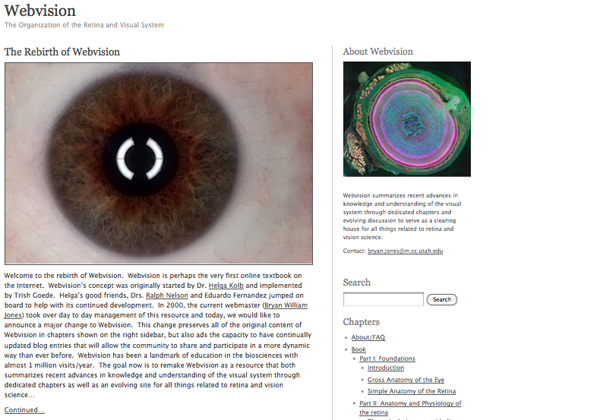 I’d like to announce the rebirth of Webvision.  This has been a Herculean effort by myself and Sawyer Pangborn to migrate the content from the old website to the new, WordPress driven Webvision.

Webvision was one of the first, if not *the* first online textbook that generates somewhere around 1 million visits/year.  Its actually difficult to go to a scientific vision meeting and not find material in someone’s presentation that has been taken from Webvision.  Additionally, it is used by many, many instructors world-wide for education.  With these changes, Webvision has now evolved into an interactive, dynamic blog hosted on WordPress that covers all things related to the bioscience of the visual system while at the same time taking advantage of many of the new features of social media and database driven blog platforms.  The chapter content from Webvision is still there on the side and will continue to be updated, but the blog capability also enables new content to be easily updated and managed including news items, funding announcements and more.

Helga Kolb started Webvision back in the early 1990’s along with Trish Goede who did the first html hand coding and served as the first webmaster of Webvision.  Two other authors, Ralph Nelson and Eduardo Fernandez helped manage early content and moved the concept forward by encouraging other authors to contribute chapters.  Eduardo further helped by translating a Spanish version of Webvision that was tremendously useful to the community and was a valuable resource in Latin countries until Google’s Internet translation service took over most of the traffic.  Helga Kolb has continued to curate chapters and solicit new material from authors while I took over as webmaster in 2000, maintaining, editing and administrating Webvision ever since.

Webvision started out life being hosted on an SGI Indigo2 workstation, then migrated to one of the original Bondi Blue iMacs running MacHTTP where it lived for years.  With the advent of OS X, Webvision became much more stable and I stopped receiving emails notifying me that Webvision was down yet again.  Webvision lived on that G3 iMac then migrated to a G4 Mac Mini generously provided by Robert Marc when a power surge killed the old G3 iMac and then to a G5 Power Mac I provided to better manage backups through Time Machine as well as facilitating off-site backups.  Then yesterday, on April 12th, 2011 Webvision moved to the new WordPress platform on a brand new Intel Mac Pro running OS X.

It’s been a long time in coming, but I am hopeful that this migration will continue to help promote communication and education in the vision sciences.