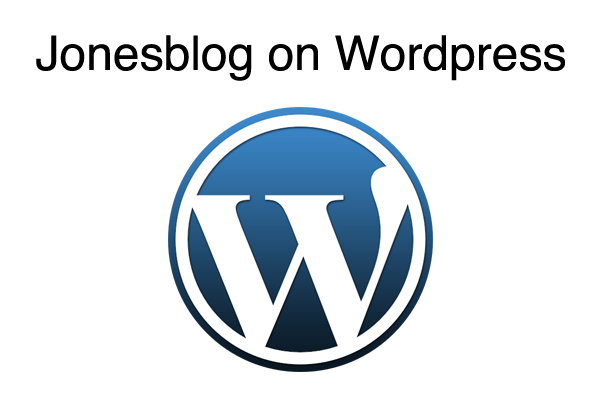 Jonesblog is now running on a slick WordPress backend thanks to the mad skills and ministrations of Sawyer Pangborn. Sawyer worked to deliver a seamless transition from my previous iBlog based blog to a modern, database driven platform, a most challenging task indeed.

Jonesblog originally was a hand coded html page with updates to keep friends and family updated on activities. When the elegant, forward thinking iBlog came along, created by a developer with a company called Lifli, I eagerly embraced it and became a huge fan of the application as did others such as O’Reilly Press who awarded iBlog an OS X innovation award. iBlog made creating webpages with text, images and video easy as could be, but unfortunately over the years it fell further and further behind. I continued to stick with it for a variety of reasons and in fact, I was likely one of the last people on the planet, if not the last to be running iBlog. iBlog was originally an incredibly easy to use and flexible application that allowed for blog management and even an extensibility that made it a joy to use. However, its real strength (and weakness) was that it did not require one to master MySQL or even know how to get into the guts of Apache. I really wanted to stay with iBlog as I had spoken several times with the author and had even championed iBlog to shall we say, senior people at Apple Computer. Apple even managed to package iBlog with their newly released .Mac accounts, but that would be the extent of the involvement for a variety of reasons that I will not go into here. It will suffice to say that the the individual behind iBlog and Lifli would eventually make an abortive attempt to upgrade iBlog to a 2.0 release, but it never got out of beta status. Many folks made efforts to urge the original developer to finish the work, but it became evident that iBlog was abandonware. Others attempted to get the developer to opensource the code, or at the very least make a tool or script that would allow iBlog users to get their data, words, links and images out of iBlog and parse the cryptic URLs and thousands of files that iBlog created (sidenote: Jeff McGrath helped figure out that some of the URL was UNIX timecode based, but is not consistently maintained). Unfortunately, the developer went longer and longer inbetween responses to end users and even was unresponsive to executives at more than one company (Apple *and* Six Apart) who were making inquiries into purchasing the software. Eventually, many of the original iBlog users including my friend Maria, started making the transition from iBlog to other platforms, most notably WordPress. Other folks even published guides on migrating away from iBlog to WordPress, and I had intended to follow them all earlier, but the effort was more than I could spend at the time and I continued limping along with iBlog, afraid at every system software update that something would kill functionality and I’d be dead in the water.

I started getting serious about moving it to WordPress a couple of months ago and was considering simply re-entering all of the information by hand as some of my efforts to export Jonesblog missed many entries and in particular images. Fortunately, my friend Rich introduced me to Sawyer at a Zach Arias mixer. Rich related that Sawyer had been instrumental in helping him to migrate his site with a seamless transition. I was impressed enough with Sawyer that I inquired as to whether or not he’d be interested in a challenge. He was and here we are. I cannot endorse Sawyer Pangborn highly enough. He is clever, well socialized, remarkably intelligent and resourceful and that man knows his databases. I look forward to further interactions and am most grateful for his assistance in getting Jonesblog migrated. If you need assistance with databases, or WordPress related issues, Sawyer is your man and his services are a bargain at any price.

One Reply to “Jonesblog on WordPress”