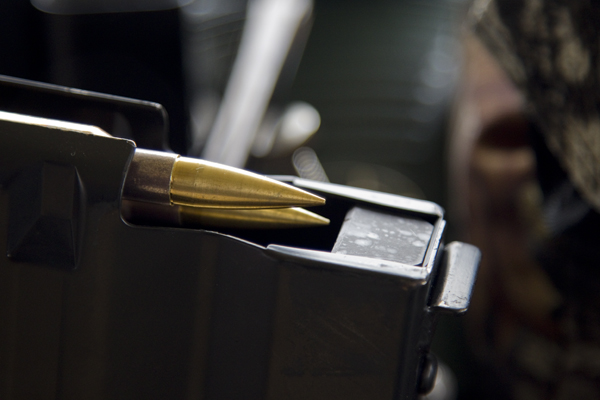 I flew down to Las Vegas to do some work that I’ll talk about here later. But while I was in town, I took two days to document Media Day and Shot Show 2010 for a number of sources including Wired, The Firearm Blog and other resources. 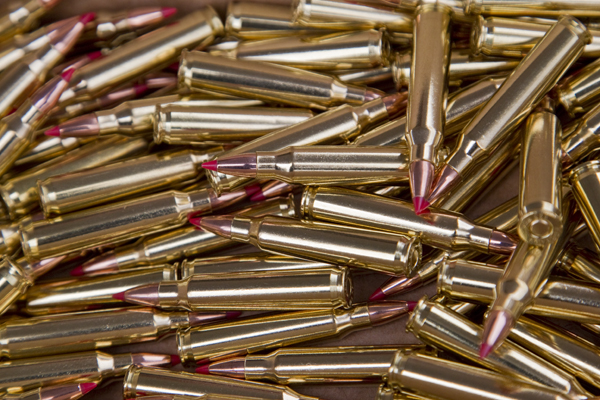 Its funny, but as a kid I always imagined that once the year 2000 rolled around, we’d have the phasers from Star Trek that could both stun and destroy, colonies of people living on the moon, ubiquitous computing with easy access to answers and? starships. Its now 2010 and we do have some of these things, albeit in more limited forms. We have Tasers that can stun people, a variety of non-lethal arms that can disable folks and lasers that can both target, daze and destroy. Apple has brought us the iPhone and now the iPad reminiscent of devices seen on Star Trek, but unfortunately we are still confined to this little blue marble in space shooting at things with ballistic devices that largely still work conceptually like the devices from the Middle Ages that originally coined the term “firearm”. In short, we are still launching projectiles at high velocities through controlled application of burning propellants which is more than a little disappointing. However… 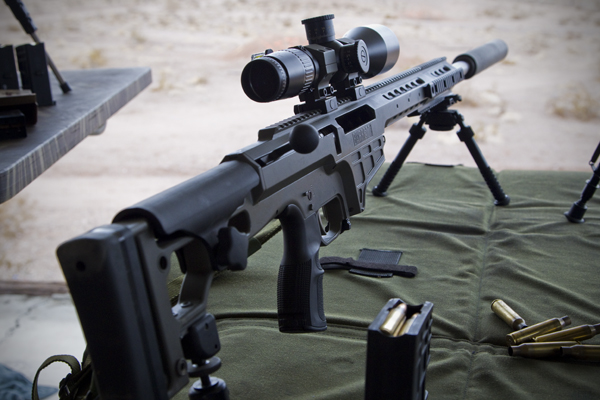 Even though we are not yet in the age of The Jetsons, there are some mighty impressive targeted applications of technology out there to efficiently and accurately launch those projectiles and today we had the opportunity to examine, document and shoot many of the newest and latest technology in small arms. The weather was not quite as nice as the last Shot Show I attended in 2008 with lots of rain and cold which made the Media Day At The Range, the day before the Shot Show a little more challenging. Las Vegas got more rain in the couple of days around my visit than they normally get in an entire year. Along with the rain came cold and wind, which made conditions less than desirable, but did not stop a number of journalists from exploring some of the latest offerings the firearm industry had to offer.

The new experimental 338 Barrett PSR rifle shown above was one such example. While I’ve been shooting long distances (500-1000m) for years, I had no time with this rifle and was not expecting the kinds of performance it delivered. The first three shots I took with this rifle were at 600, 900 and 958 yards and all three were hits. Mind you this was in the rain with a slightly gusty wind coming from the North. Some of that is the round, a 338 Lapua, some of it was in the suppressor made by Gemtech up in Idaho, but the rest is all Barrett. The rifle weighed approximately 13lbs, which is lighter than my current .300wm and half the weight of the M82a1. It was very smooth, easy to position with excellent ergonomics and I cannot wait to see more of this rifle when it is released.

A Movie of the Barrett .338 PSR rifle being fired can be seen here. Note how the Gemtech suppressor keeps the sound and recoil down to quite pleasant levels. As an aside, I am surprised that suppressors have to be specially licensed here in the U.S.. Other countries require them to reduce sound pollution and as a safety issue as allowing more people to use suppressors here in the U.S. would have beneficial long term effects on hearing loss in the shooting population. 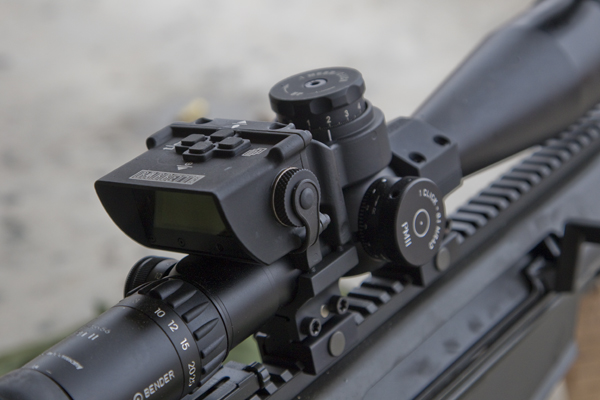 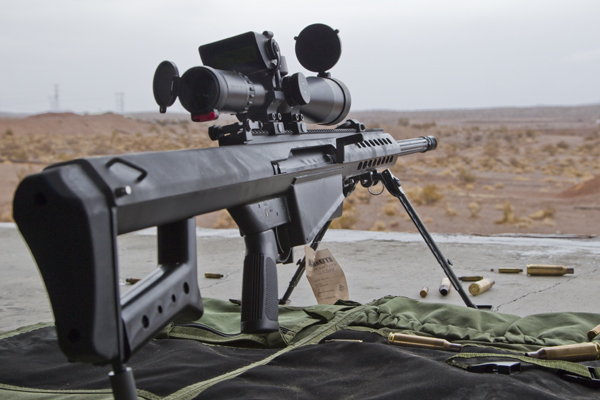 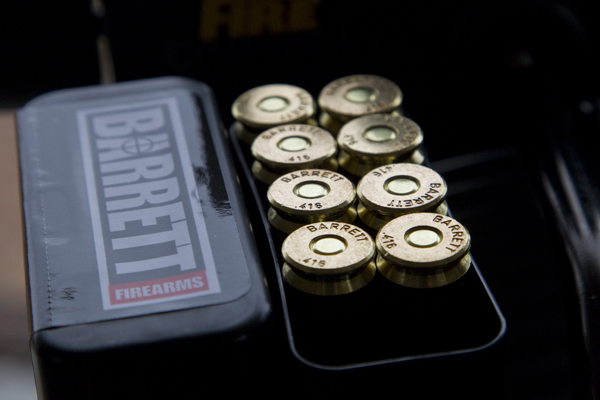 Barrett also brought a number of other rifles to the shoot including their new M82a1 chambered in .416, a round designed to improve on the ballistics of the .50 BMG. Their new M82a1 rifle came equipped with their Barrett Optical Ranging System (BORS) which integrates a ballistic computer into a Leupold, Nightforce or Schmidt & Bender rifle scope. The combination of BORS, the M82a1 with the .416 round makes for a remarkably compelling platform allowing long range shots to be made with with pin point accuracy. The flexibility of a semi-automatic platform also provides for rapid reacquisition and followup shots. A movie of the Barrett .416 being fired can be seen here. This was one of the loudest rifles on the range. Every time it went off, it sounded light light artillery at a distance as the recoil reverberated off the tin roof of the range shelter. 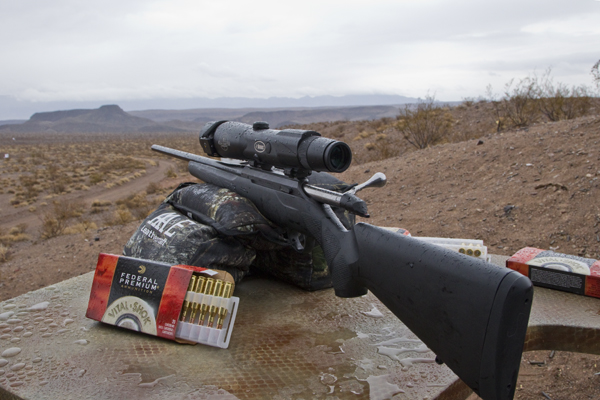 Burris had a new scope they were demonstrating in their Eliminator. This is a new scope with built in laser rangefinder, something other scopes have done in the past. However, this new scope automatically calculates the trajectory and illuminates the holdover required to place the shot on target. Despite not having any experience with the Tikka T3 rifle, I was able to make a 700 yd shot in the wind and rain with this scope on the first try. Aaron, who has no long range shooting experience was able to make a 400 yd shot on his first try with this scope and rifle. Granted the Tikka rifle in 7mm is an absolute tack driver, and I do have many years of experience with the 7mm cartridge thanks to my Dad, but I doubt I would have been able to make that shot on the first try without the Eliminator scope. 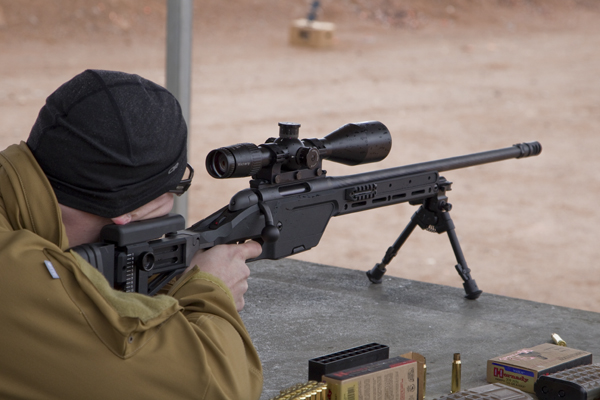 Steyr had their redesigned Steyr SSG 08 rifle available with a new folding stock and an extended rail making more optic options available, though this rifle was equipped with one of Zeiss’s new Hensoldt scopes that are some of the best optical experiences available. The Steyr Elite is beautifully built and amazingly accurate in a package that weighs less than 13 lbs. 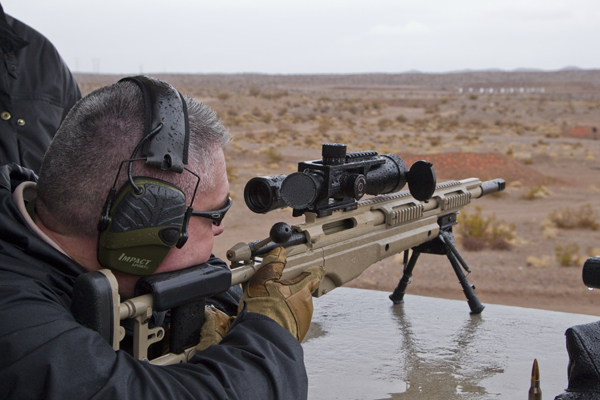 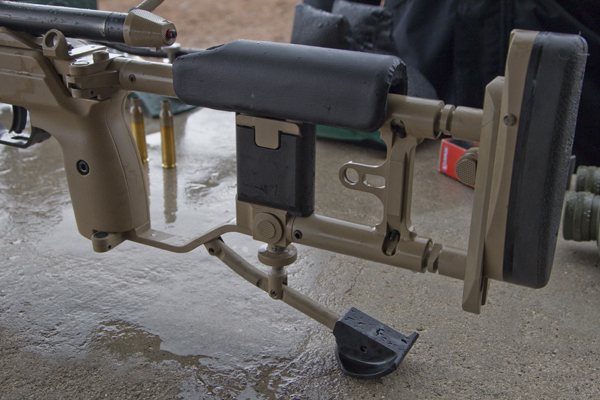 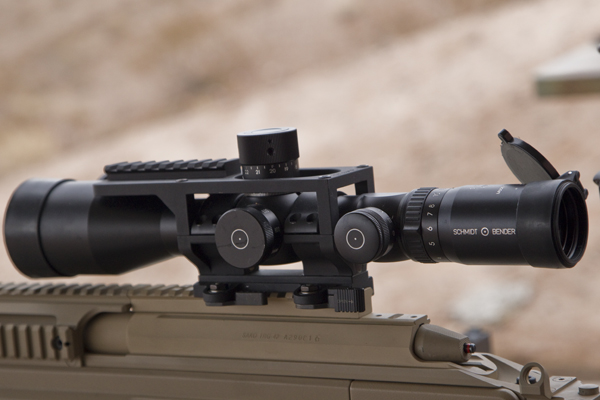 The Sako TRG-42 is new to the tactical market and has a new chassis system and rail that apparently is being designed and developed for the Marine Corps long range competition. The adjustment on the rear of the stock lets one make micro adjustments in elevation easily with your off or support hand. I found this rifle to be very accurate, hitting targets out to 756 yards which was as far as I had targets for. The new chassis was greatly appreciated along with the ease of action due to the Teflon coated bolt as the rain began to really come down. Schmidt & Bender had their world renowned PMII scope on this rifle making for an accurate and pleasant experience. A short movie of the TRG-42 being shot is here. 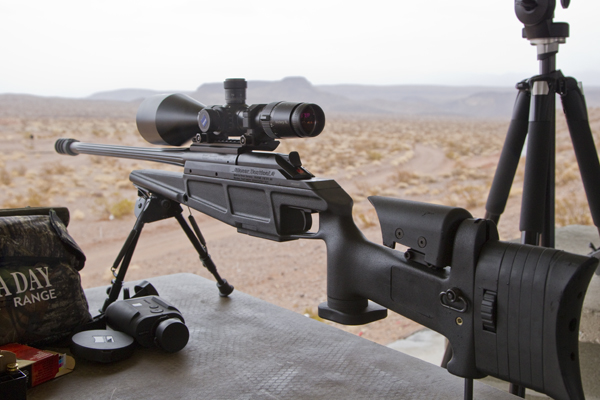 Blaser brought out a number of rifles to the shoot including their Tactical 2 rifle. This was my first experience with a Blaser rifle and I came away suitably impressed. The speedy and straightforward bolt handling reduced the number of movements involved with re-chambering a round, simplifying target reacquisition. It was also relatively lightweight compared to my current GAPrecision built rifle in an Accuracy International chassis. It was also topped with a wonderful optic which I have on my own rifle, the Zeiss Victory Diavari. While the turrets are not all they could be compared to Schmidt & Bender, the glass of the Zeiss is about as good as it gets with edge to edge clarity, amazing low light transmissivity and color fidelity. 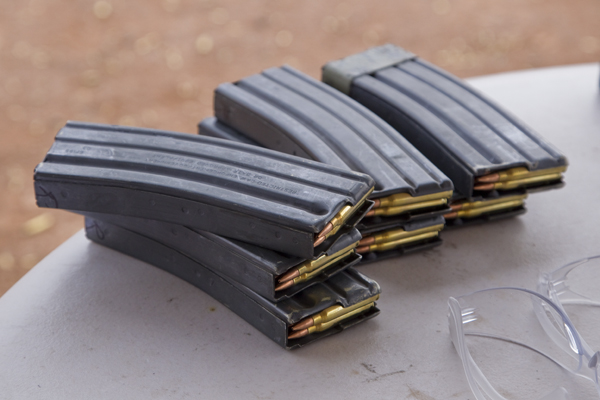 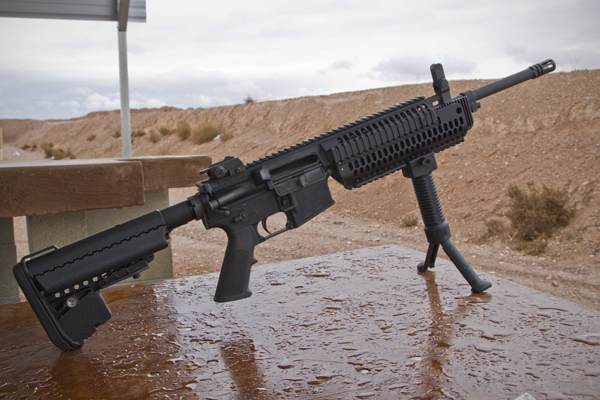 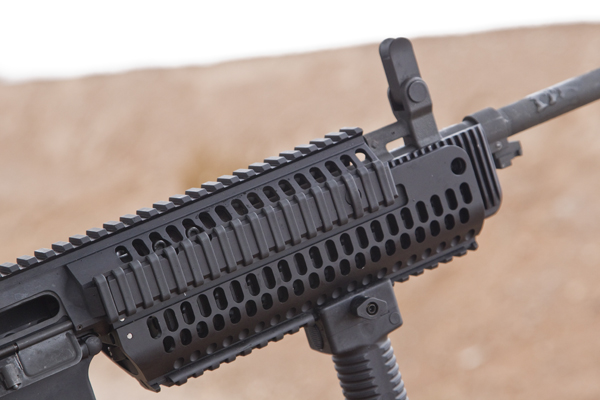 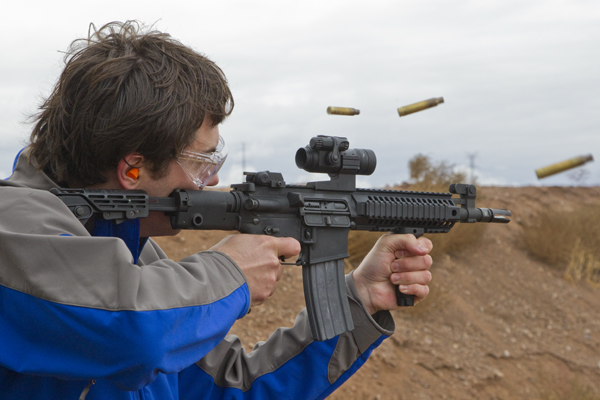 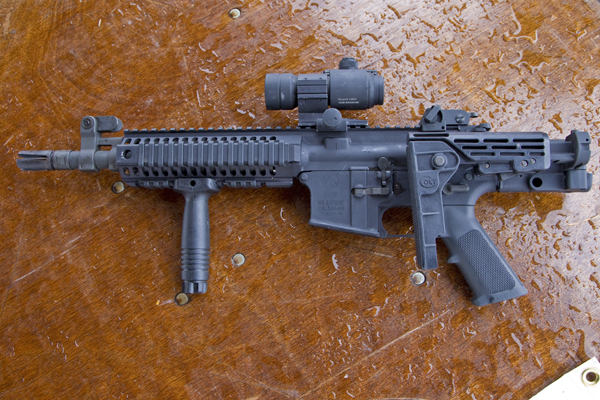 Colt brought out some new hardware including their new Infantry Automatic Rifle (IAR) and the Colt Sub-Compact Weapon (SCW) previewed at last years Shot Show. Both rifles are chambered for 5.56mm with the IAR being intended as a handier, more portable and less expensive replacement of the Squad Automatic Weapon (currently the M-249) for the Marine Corps at least. I was surprised to find out that the IAR uses direct gas impingement rather than a piston operated mechanism, though Colt claims that weight is lower and reliability is adequate with proper maintenance, a mantra maintained by just about everyone who fields the current M-16/M-4. I found the IAR to have a front weight bias due to the substantial heat sink on the barrel, but under firing the weight helps to maintain controllability by reducing muzzle rise and prevent heat buildup during sustained firing. I did not get a chance to run enough rounds through the system to make a determination of heat control, but the Colt engineers maintained that you could go through thousands of rounds without significant heat buildup.

The Colt SCW was initially previewed a couple of years ago and represents a very portable platform for close, confined spaces and for vehicle operators while still allowing a 5.56mm round. The SCW we tested used a gas piston system called the Colt Piston System (CPS) and had an improved dust cover that eliminates the need for a tradition ejection port cover. Most interesting however, was the new short buffer tube with side folding/telescoping stock. 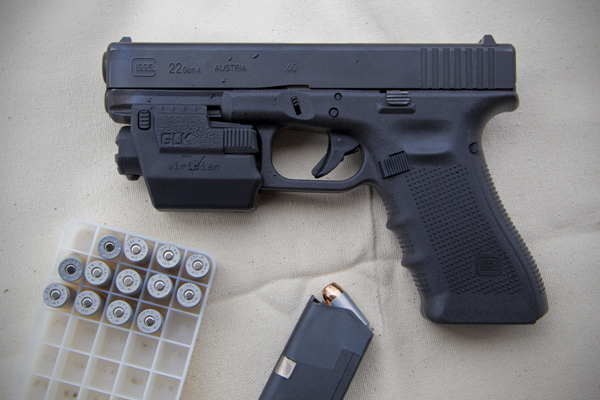 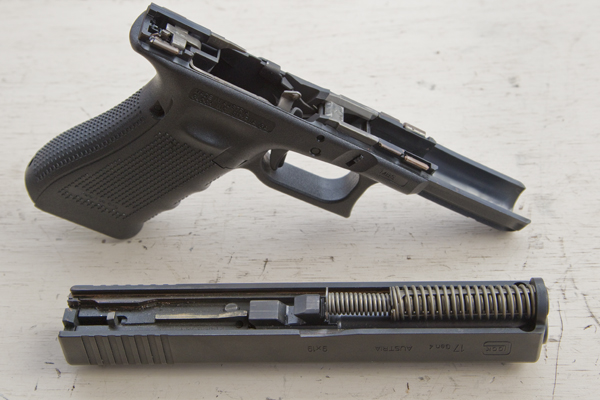 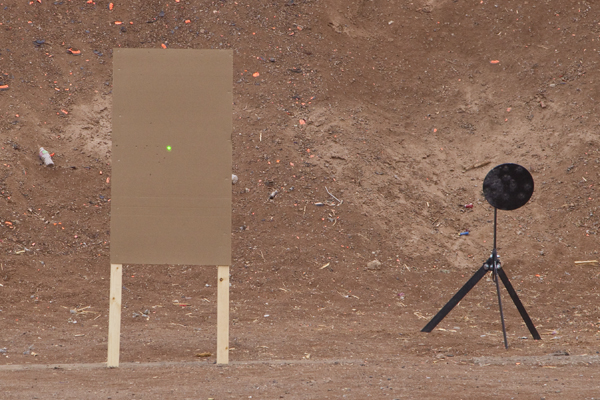 Last up was the new Generation 4 Glock 22 with a Viridian green laser. This was actually the first time I’d ever shot a Glock, so I needed a little familiarization with the platform before going out to the range. This was a substantial update to their previous sidearms, the Gen. 3 Glocks and given that this was my first experience with the product, I had no frame of reference as to what the improvements had been. The grip was nicely textured and like other manufacturers, Glock has now included an adjustable/interchangable backstrap for a close to custom feel for the grip. This was also a .40 cal sidearm, a round I’ve not historically been fond of due to the sharpness of the recoil interfering with followup shots, but the recoil on this .40 Glock was surprisingly soft for a .40. This is likely due to the compound (three separate) springs in the slide.

One other thing I really liked was the Viridian green laser that could be attached as an accessory. While I’ve not historically been a fan of laser sights, these are impressive enough that they will become a more practical alternative to sighting. My objections to laser sights have been that they tend to interfere with traditional sighting technique, leading some to rely inappropriately on the laser to properly aim their weapon. Also traditional red lasers have limited utility as they cannot typically be seen in the daylight or outdoors at any time other than dawn, dusk or night. The new Viridian green laser however can be seen in broad daylight and is a much more useful visible laser sight than the traditional red wavelength laser sights. The lasers are powered at the same wattage, but appear much brighter to the opsins in our retinal photoreceptors being much more sensitive to green light than red light. 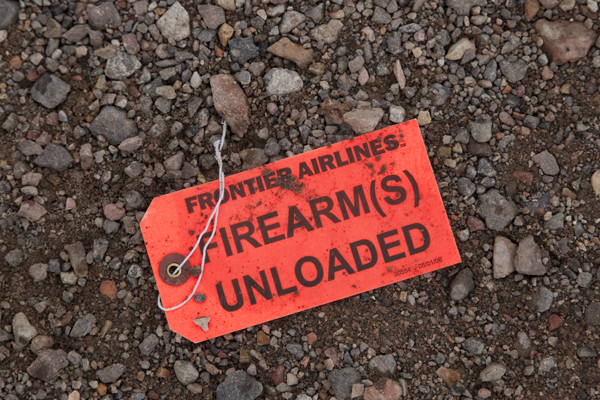 I did not get to see everything at Media Day, but this picture above wraps it up for Media Day. I wonder how many firearms made the journey to Shot Show on airplanes and what those information logistics and statistics look like?