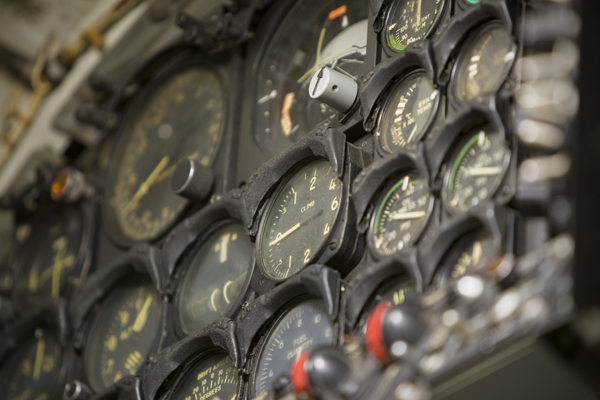 Back on December 13th, we held a Photowalking Utah event up at the Hill AFB museum. Unfortunately, it has taken me a while to go through all the photographs and post them due to an insanely busy work schedule prior to the holidays. So, despite the tardiness of the post, here they are. The introductory photograph is a shot of the cockpit of a Martin B-57 Canberra. While the aircraft is quite old having entered service back in the 1950s, it is still a good design, particularly for a stable, relatively high altitude aircraft. In fact, there are still two in service with the National Aeronautics and Space Administration (NASA), ostensibly doing high altitude research. The reality is a bit more complicated as they are actually doing a bit of work for the Department of Energy (DOE), but that is another story. You can see a shot of a B-57 in NASA livery sitting on the DOE ramp from my visit to Nellis AFB here. 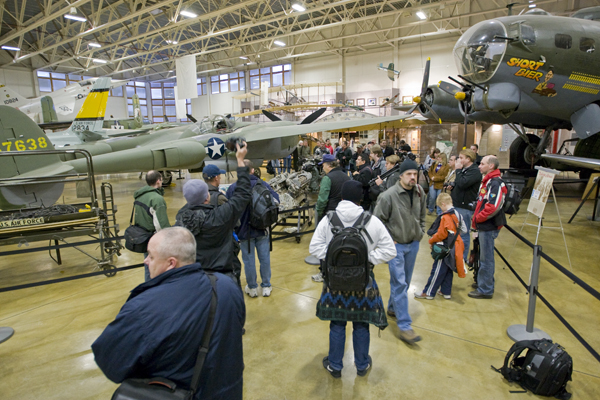 The turnout was quite good with close to 60 people showing up. We were pleasantly surprised at this given the rather horrible weather outside. A huge storm-front was moving in with near blizzard conditions outside, so the fact that so many people turned out was a testament to how dedicated these photographers were.

The Hill AFB museum is actually one of the best curated air museums around with impressive indoor and outdoor displays and it is well worth your time if you happen to be in the area. There are a number of sections to the museum including a section for uniforms and flight suits from around the world, the earliest days of flight through World War II, the Cold War and currently fielded aircraft. 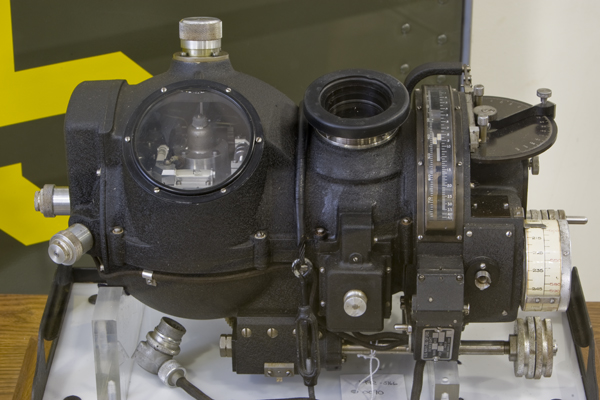 The Norden Bombsight was a marvel of technological engineering when it debuted back in the late 1930s. It was considered so important to the war effort that considerable security was implemented to keep it safe. Bombardiers took oaths to protect the technology with their lives if necessary and were under strict orders to destroy the sight with thermite charges should the plane be captured or fall into enemy hands. 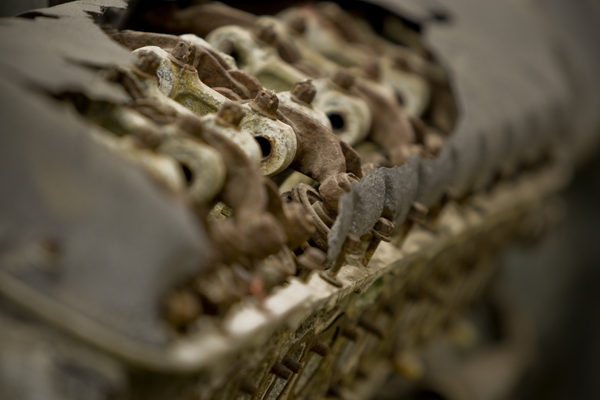 This is the remains of an Allison V-1710 V-12 engine engine that powered a P-38 Lightning. 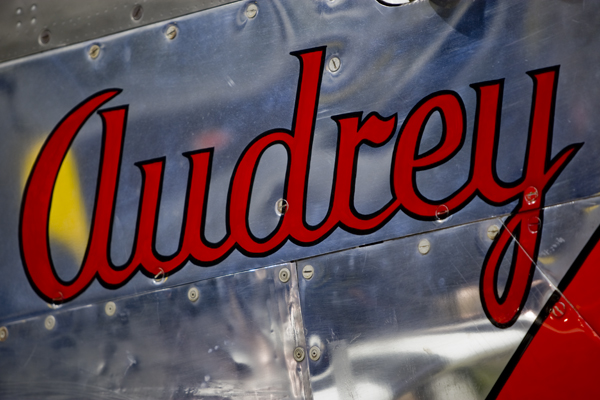 Audrey is the name given to the museums P-51 Mustang. This exhibit was remanufactured by museum staff. 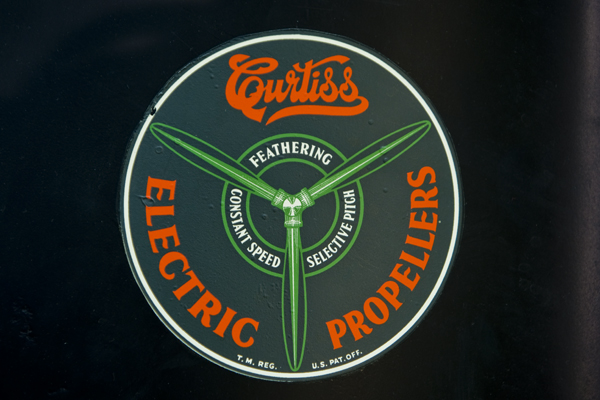 This was on the propeller of one of the aircraft on exhibit. Curtiss-Wright at one time was a leading aircraft manufacturer and during WWII, provided many of the components (and aircraft) used in the war. 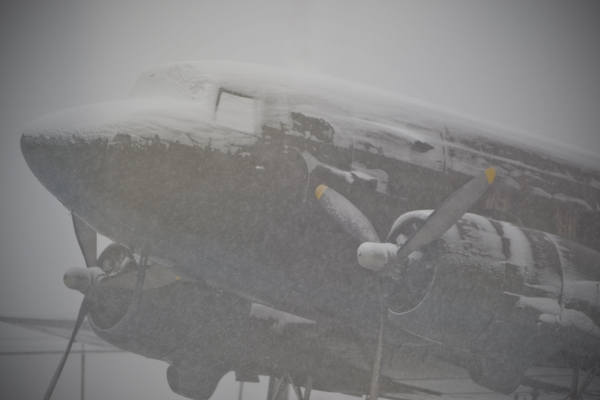 This was one of my favorite scenes of the Photowalk, a C-47 Skytrain sitting out in the snow. This is easily a scene that could have been taken at any time in the last 65 years. The shocking thing to note is that many of these aircraft are actually still flying, carrying passengers and cargo in a number of places throughout the world. 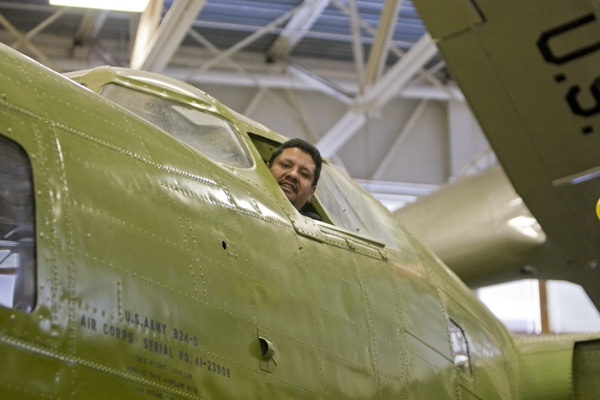 One of the attractions that we like to have in our Photowalking Utah sponsored photowalks is unusual access to places and circumstances that are out of the ordinary. In this case, Ed Paz, one of our Photowalking Utah members got to sit in the beautifully restored cockpit of the museums B-24 bomber.

I have to say that getting to sit in the cockpit of this aircraft was a bit of a thrill for me as well. Years ago, my Grandparents were visiting us and we got to talking about medical checkups (my parents are physicians). We discovered that my Grandfather who had smoked his entire life, had never had a chest X-Ray. So everyone concluded that first thing in the morning, we’d go down and get a chest X-Ray. The next day after the X-Ray film was developed, everyone crowded around the light-box to look at the film and were shocked at all of the wire wrapped around the ribs in my Grandfathers chest. “What happened Dad ??!?!?!” my mother asked, to which my Grandfather replied “Oh, I crashed a plane back in the war. Of course being the plane crazy 13 year old kid in the room I asked “what *kind* of plane Grandpa?”. He replied with a smile “A B-24” to which I nodded knowingly. I’ve always loved the B-24 Liberator. The Liberator looked chunkier and less capable than some of the other bombers of the time, including the B-17, but it was a newer design that had greater performance potential than the B-17 by flying faster and further, yet with the same bomb load. Ironically, even though this aircraft was produced in greater numbers during the war than any other bomber, there are very few of them around in museums, so this visit had extra special meaning to me. 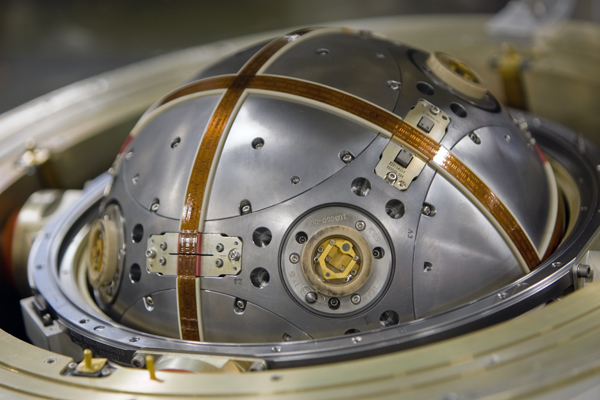 This is a gyroscopic and inertial guidance module from a nuclear missile. It turns out that Hill AFB has a rich history of weapons system maintenance that continues to this day. It is not widely known, but one of the weapon systems that is maintained up at Hill AFB are nuclear missiles. I’ve documented some of the maintenance operations up here at Hill on the C-130 line and the A-10 line in the past and one of the questions that has come up is whether I’d like to document some of the other maintenance missions. If it can be worked into the schedule and clearances can be maintained, I’d be more than interested in documented the missile maintenance mission. 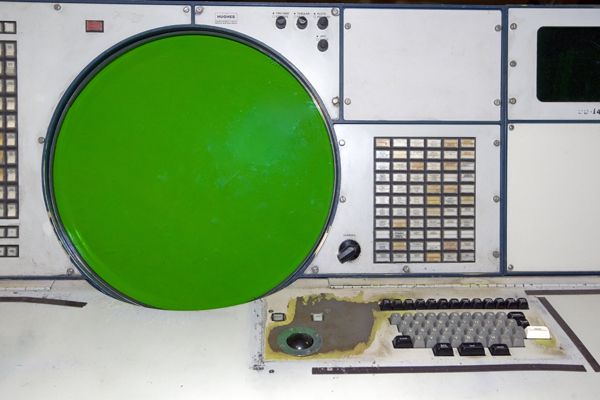 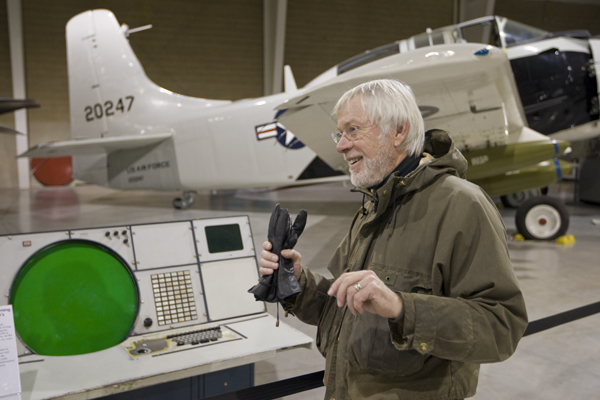 Robert came along with Ann for this photowalk to see some of the missiles and the museum. One of Robert’s favorite exhibits was the radar control console. It must be some sort of science fiction appeal, but I think every geek worth his or her salt has at one time wanted a circular display. Even if it simply sat in the corner of ones office or lab, it could be looked at and admired from time to time….. But I digress. 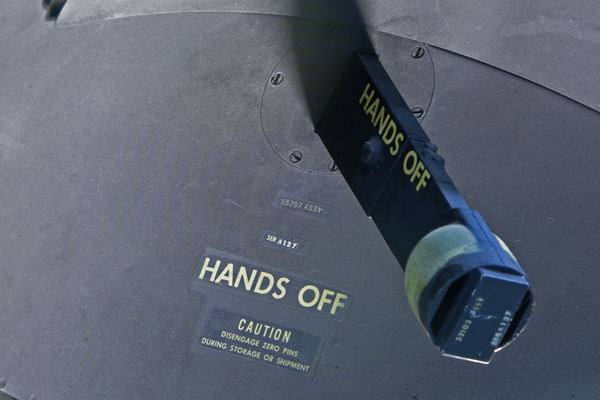 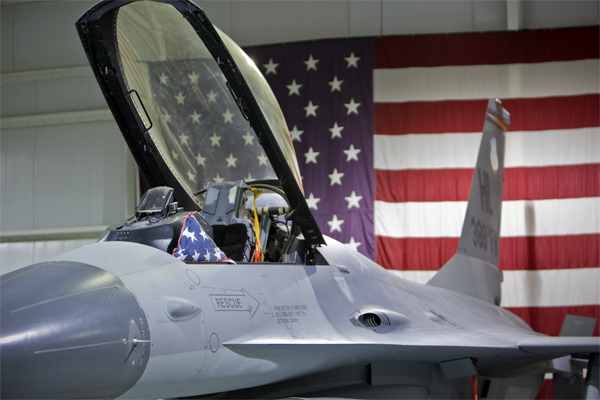 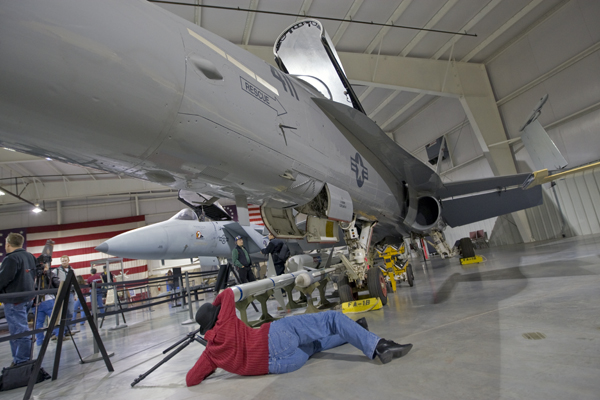 As you move to the back of the museum, you go through Cold War exhibits including F-106 and F-4 jets onto more modern platforms including the F-15, F-16, F-18 and A-10. I noted it before, but the F-16 has a special place up here at Hill as there is not only a major combat air wing assigned here that operates F-16s, but there is also a major maintenance operation that restores, repairs and maintains F-16 fighters for not only the US Air Force, but for other countries as well. 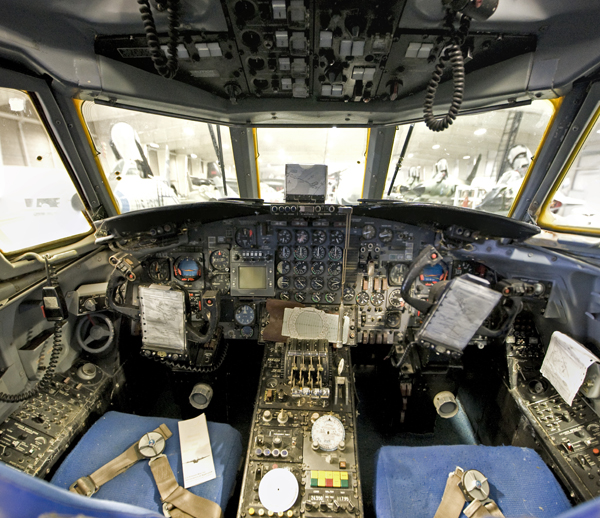 One of the planes on exhibit is the personal aircraft of Lady Bird Johnson, a Lockheed JetStar. This was another aircraft that we were granted special access to for the photowalk. 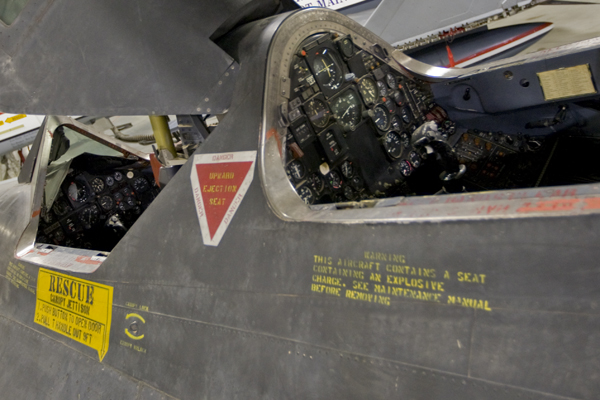 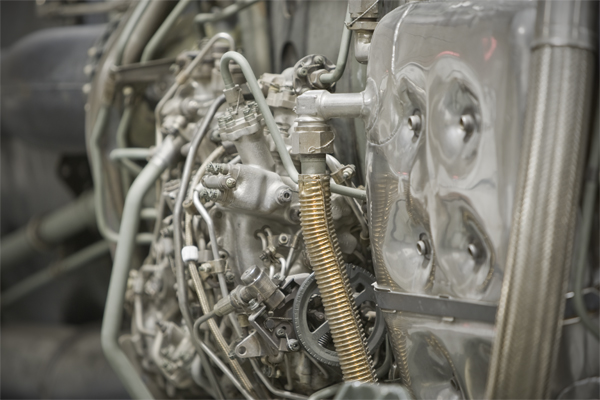 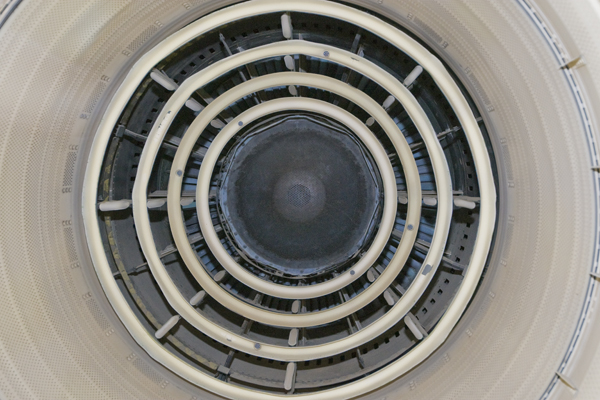 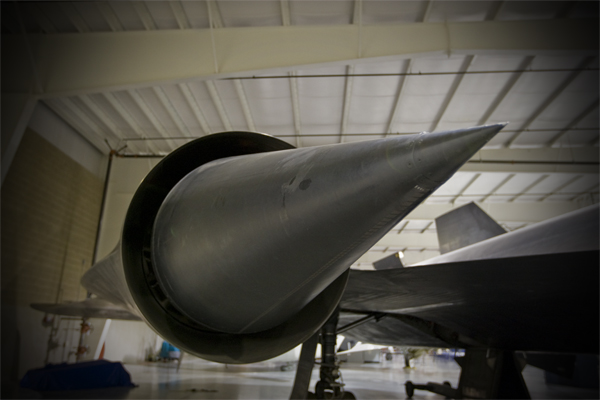 Finally, the one aircraft that had the dreams and aspirations of every jet loving child of the 70s and 80s was the SR-71 Blackbird. In my early college years, I was being recruited by a group that wanted to put the Blackbird out of business. They promised that satellites were the future and that old, tired designs like the SR-71 were doomed to history. Well, it turned out that while the Blackbird was indeed retired, due to failures in certain programs, the SR-71 was pulled our of storage and enjoyed a few more years of active use before being re-retired. However, this aircraft still holds a spot in the hearts of many as the penultimate in aeronautical design. In fact, this aircraft has more records for altitude and speed than any other and could achieve speeds of Mach 3.2+. Imagine being able to fly from New York to London in less than 2 hours… The last time I made that trip, it took closer to 6.5 hours. Of course anything operating in the atmosphere is going to have to deal with certain physical realities and any successors to the SR-71 will likely not be exclusively atmospheric vehicles, rather they will be or are hybrid atmospheric/space vehicles.