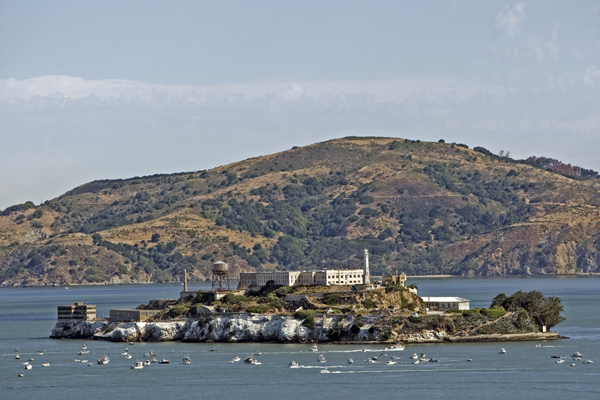 H and I had a whirlwind trip to San Francisco for meetings, and just a little bit of photography. I managed to cram in an amazing amount of stuff in today with some visiting time with my uncle and nephew, a meeting with Bill Bumgarner at Apple, my friend John Randolph, and friends at Stanford, Daniel Palanker and Phil Huie.

First thing in the morning, we were up for breakfast initially at the Top of The Mark until we found out that breakfast there was a buffet only and frankly, it did not look that tasty and the coffee was horrible…. I mean really, astoundingly bad. So, I paid $5 for orange juice, then it was back down to look for a tastier breakfast at the Gallery Cafe (cash only please), where they did a reasonably good breakfast for far more reasonable prices than the buffet at Top of the Mark, though with less fabulous views. It really was too bad as the rest of the stay at the Mark Hopkins San Francisco was quite pleasant.

After breakfast, H went to her meetings and I jumped in the rental hoopty and headed for Cupertino, and Saratoga. I had a tiny window in my day, so I made a quick phone call hoping to catch family I have in Saratoga. Unfortunately, I missed my aunt and niece who were off with the horses, but I did manage to spend an hour or so with my uncle and cousin which was really nice. We got to catch up, share some stories and drink coffee before having to run off to Apple for the next meeting. 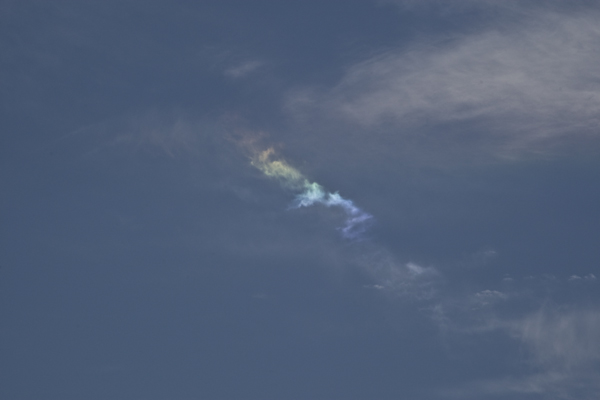 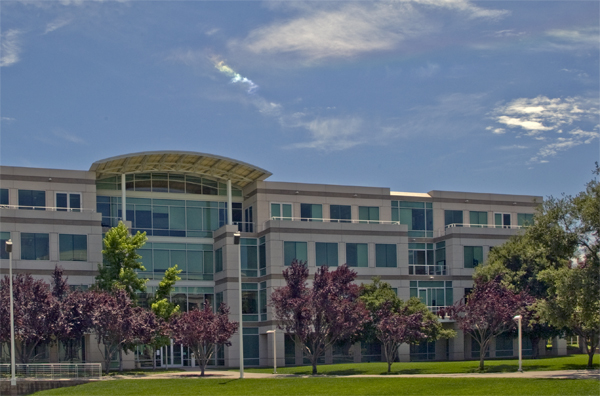 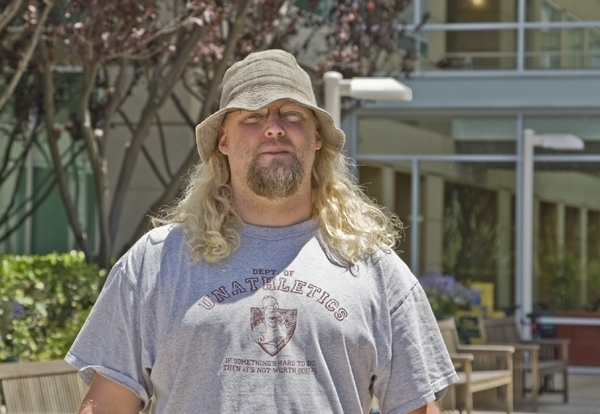 After that, it was a quick drive from Saratoga to Cupertino for lunch with Bill. Walking to the cafeteria, Bill and I were treated to a rare sundog over the Apple campus (rare because of the heat that day).

One impressive item of note is that in the short few years that Bill has been at Apple, he apparently has managed to get all 5500 employees at the main campus to know him. Walking around with Bill was a constant “hey Bill”, “what’s up dude”, “nice tequila party man”, “legendary crabtacular man”, “when does the code ship” and on and on. I asked him if he knew everyone to which he shrugged and said “probably”. The funny thing is that I can easily see Bill as a VP within a couple of years, so it will be interesting to watch. 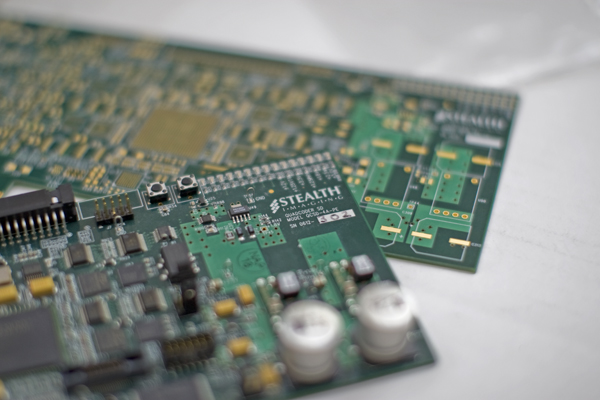 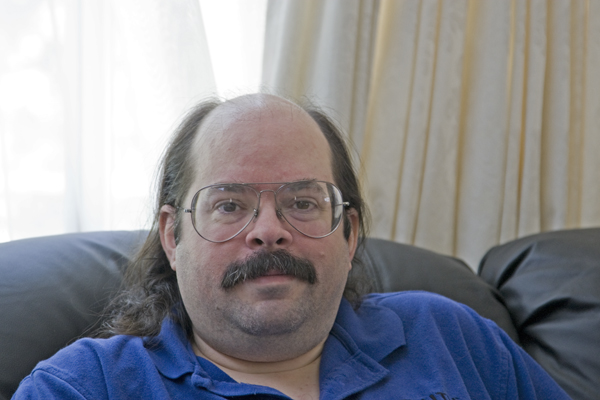 Bill and I visited for a while before heading off to the Apple Store at the Mothership followed by a drive down the street to meet my friend John. John used to be an Apple employee, but left to form his own company, Stealth Imaging where I suspect he will do quite nicely. Stealth Imaging is one of those companies that was started to meet a specific, yet completely unsatisfied need and they have a product that looks to beat all competitors soundly. I can’t wait to see how that story unfolds. 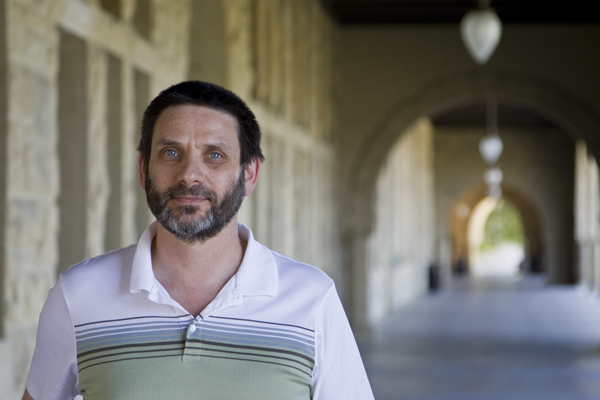 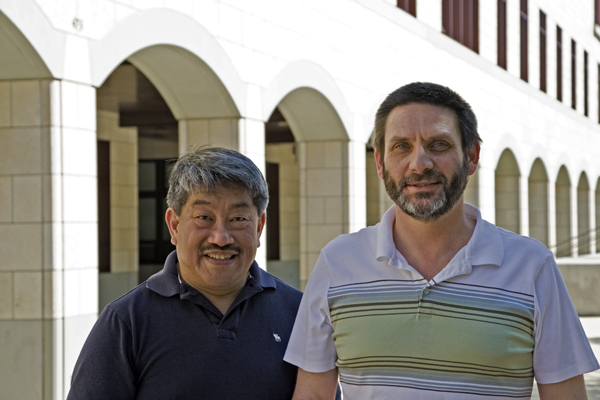 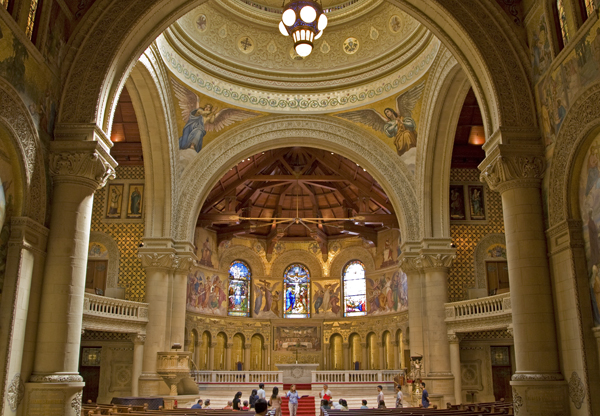 The last set of meetings for the day were up the road at Stanford where I met with collaborators and friends, Daniel Palaker and Phil Huie. We talked about a manuscript we are completing for publication, and got a quick tour of the Stanford campus. 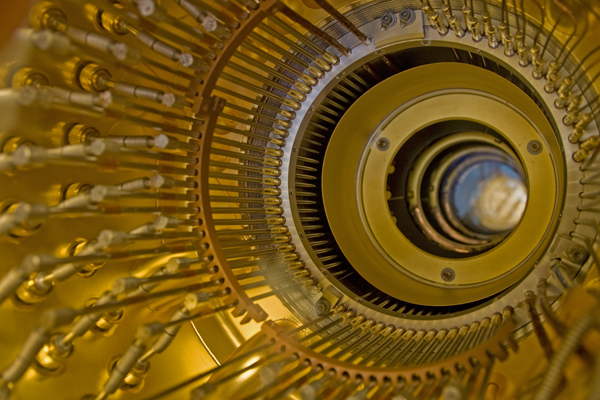 Even got to see the Gravity Probe B mockups. Gravity Probe B was a NASA physics mission to investigate Einstein’s general theory of relativity. The fact that people are still testing his theories is remarkable and is a testament to how scary brilliant that man was.

Finally, I raced back up 280 to meet H for dinner in San Francisco at Pesce on Polk Street. It was quite simply, awesome and very reasonably priced. I highly recommend the crab tower, the cioppino and the squid ink risotto. Dish that up with a little Peroni and you have a really tasty dinner.