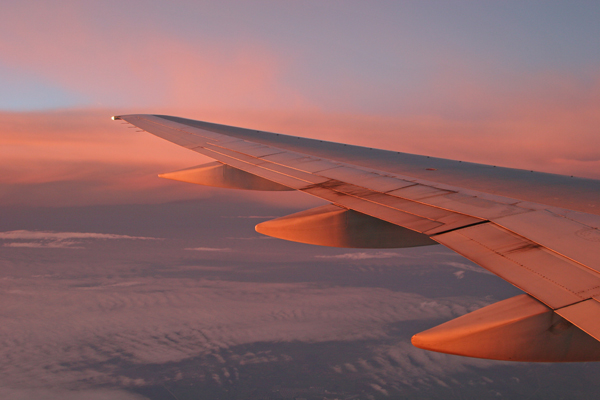 Running some errands this morning prior to flying off to Ft. Lauderdale for our yearly ARVO meeting I witnessed the following exchange while I was walking into a store to buy socks: “I’d like one of those” the slouchy young girl smoking a cigarette said to a woman coming into the store on one of those electric run abouts. “What?” the old woman piloting said scooter responded only to be answered with with the same statement yet again. After the old woman understood the statement, she responded with “Child, you appear to be young and healthy… am I mistaken or are you just lazy?” It was awesome, but it was about the only awesome I was going to get today.

I was hoping against hope that I would score an upgrade on our cross country flight, but I missed it by one position! Bummer. Instead, both James and I were relegated to the back of the plane where we initially had to endure late passengers who were delaying the plane. This late passenger boarded the plane loudly proclaiming to the person on the other end of his cell phone that “he had better be taken care of here and that his luggage *had* to make the flight” even though it was obviously apparent that it was his own fault for being late in the first place. I don’t know what this passenger did, but it warranted a visit by the police who hauled him off the plane for a time, before allowing him to reboard. Needless to say that this little interruption further delayed the flight.

After the flight got underway, I found that the other people seated next to me were equally irritating as they apparently had just met in the bar prior to takeoff and had been getting quite chummy over much alcohol. The gentleman, and I use that term loosely here, is apparently a “sales guy” for Xerox who had managed to smuggle more alcohol onto the plane by bribing the bar tender to give him cans of beer without first opening them at the bar. The lady, and I also use that term loosely here, proceeded to engage in the most banal, yet lewd conversation with this “sales guy” who was like a character straight out of fiction. Think Andy Bernard from The Office, only more lewd and misogynistic. At any rate, these two put on the most amazing display of intellectual assassination I’ve seen since junior high as throughout the flight they were deriding and mocking others who work hard to learn and discover. For example, Delta has apparently upgraded many of its planes with great little LCD consoles in the seat rests (about time, but I wish they could also manage seat power outlets). One of the features of these consoles is the inclusion of trivia games that are networked allowing the passengers to compete with each other on multiple choice questions about history, art and literature, science and technology, sports and entertainment categories. I gotta say that I was reasonably impressed with the questions as they were well crafted, not necessarily obvious and reasonably challenging for most college graduates. However, that said, these two people next to me were unable to answer hardly any of the questions and were verbally, violently aggressive toward others on the plane who were outperforming them. This aggressiveness morphed into attacks on these other folks intellectual ability through taunts and crude mocking. However, the really funny thing to me was the juxtaposition of these two individuals with the two grade-school kids behind us who were squealing with delight at their competency at this game. Only after the woman next to me jabbed me in the ribs asking for help on one of the questions did she ask about what I did. When I responded “professor”, the “sales guy” slurred “Oh, one of those go##@mned professors, ha ha ha ha ha. You are so full of $#!^. There is no way you are a F&@*ing professor.” I resisted the urge at that point to punch him in the throat, but simply smiled and asked him “What is it that you expect a professor to look like?”.

On another note, interestingly, the plane’s entertainment system appeared to be running a five or six year old flavor of Red-Hat Linux. It was buggy and appeared to have to be rebooted a number of times throughout the flight. I was also surprised that they did not at least come up with a Delta themed splash screen, but hey…. they just emerged from bankruptcy, which brings up a nice thing Delta was doing by offering complementary champagne on the flight to celebrate. In spite of not getting my upgrade to first class and having to occasionally sit next to those who are less than polite company, I generally like flying Delta and have been treated very well by them in the past and am hopeful for the recovery of the company. 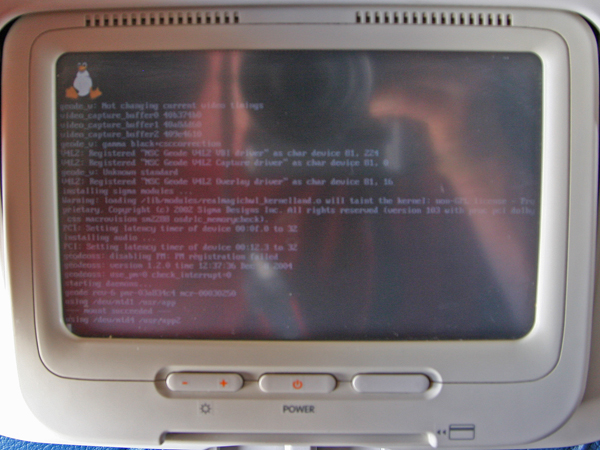 Finally, I’ll leave you with a number of images from the plane on the way down to Florida. 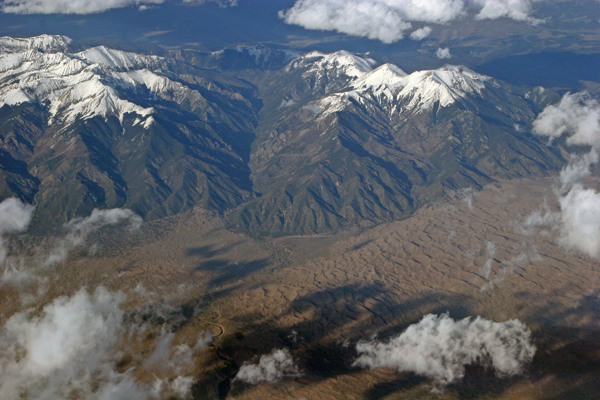 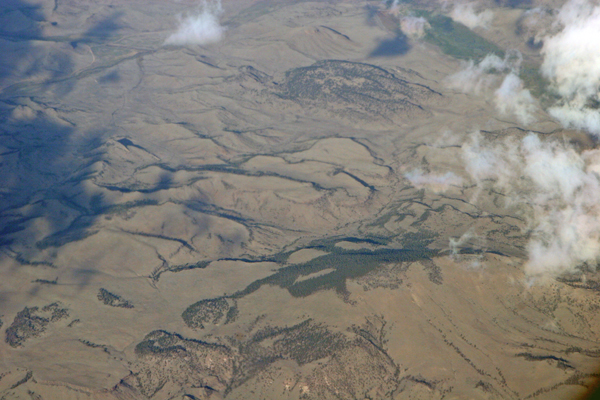 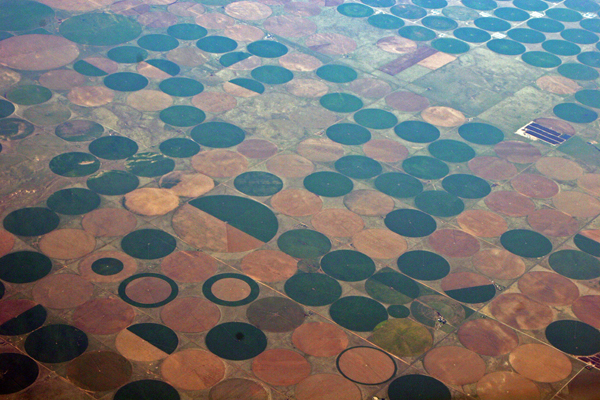 Crop circles near Dalhart Texas. No, not crop circles of the alien kind, but of the farm kind. 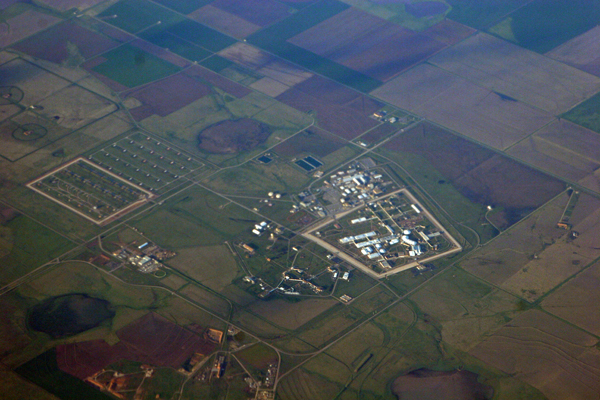 The Pantex plant where the US assembles and disassembles nuclear weapons. Security appears lighter that I would have thought from a survey of the surrounding area… 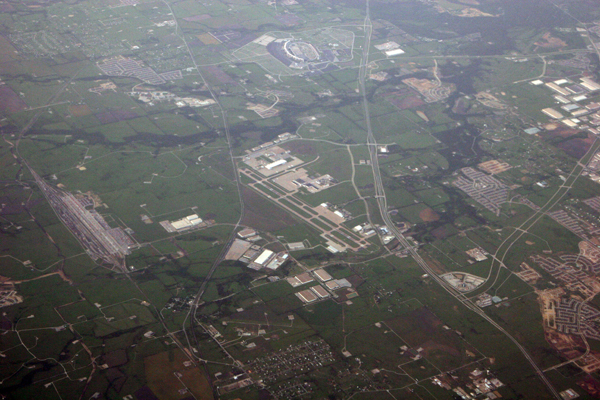 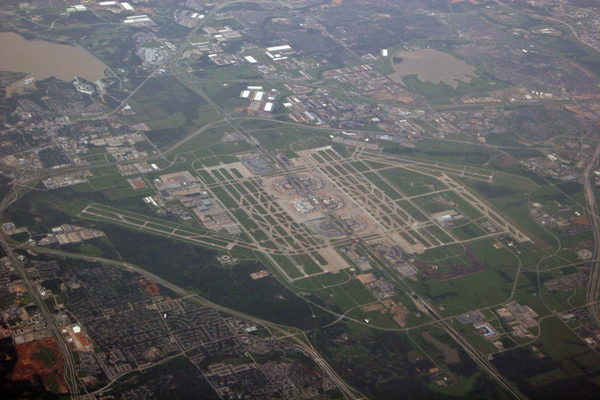 DFW on Google Maps here. This is one of the larger airports you will ever fly into, or in this case, over. The size of this airport is truly stunning.

2 Replies to “SLC to FLL for ARVO”