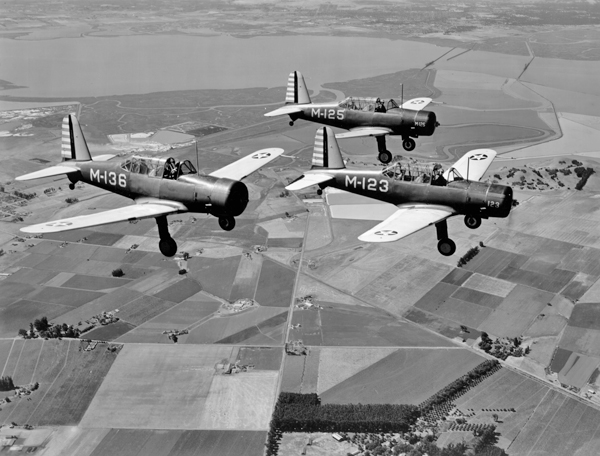 This was the time when my Grandparents met. My Grandfather was stationed at Moffett Field where he was enrolled in flight training as his cover and my Grandmother was working for social services as part of Franklin D. Roosevelt‘s New Deal to help bring the country out of the Great Depression.

My Grandmothers job was to drive around the Monterey Peninsula to check on her wards, making sure people were healthy and reporting to their jobs. She was offered the job right out of college with the provision that she had a car which she did not possess. However, jobs were hard to come by even towards the end of the Great Depression, so she accepted the job offer on the spot, not only without an automobile, but also completely clueless about how to actually drive. But with the help of her family and friends, she bought a used car and learned how to drive, journeying up the California coast in her Ford model A to Carmel by the Sea where she lived and worked as a 20 year old helping the vast numbers of Dust Bowl refugees find work. Many of these people were farmers whose farms and homes had been devastated by dust storms and had headed West to California only to find that the supposed paradise was also on hard times. These people and their stories were what inspired another resident of Carmel, John Steinbeck to pen The Grapes of Wrath. It was an interesting time in Monterey where many people who would go on to craft American art and literature would routinely interact in the small towns of Carmel and Monterey, often in the post office. Mail was not delivered house to house, so often in the mornings, it was not uncommon to walk down to the post office in your pajamas with your coffee to pick up the days mail and run into John Steinbeck or Ansel Adams or any number of artists, cannery workers, poets, writers and even scientists. It was a good time when my Grandmother would make some lifelong friends including Ruth Mirassou of the Mirassou wine making family, throw parties, go skiing up in Yosemite and at some point in 1941, meet up with my Grandfather. Unfortunately, I do not have many photographs of my Grandmother at this time other than this photo taken with my Grandfather when they were on a date. 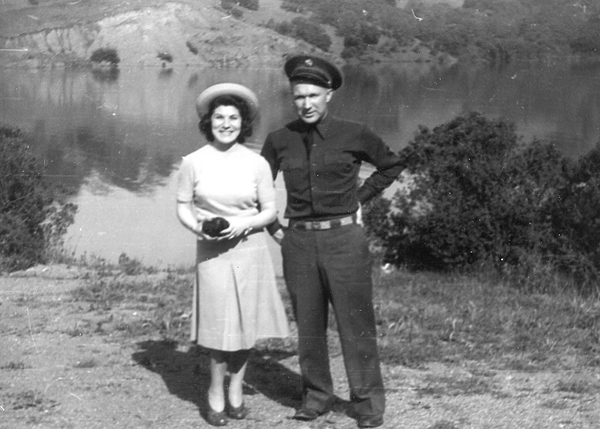 In early 1941, months before the US formally entered WorldWar II after the attack on Pearl Harbor, my Grandfather enlisted in the US Army Air Corps. He was an intelligent man who previously held a number of jobs including taking the occasional physics or engineering class at Stanford for a wealthy friend of his before enlisting. These contacts and his capabilities got him noticed by the OSS who recruited him into their ranks at some point soon after he enlisted. My Grandfathers first assignment for the Army Air Corps was at the previously mentioned Moffett Field, but it was also his first assignment for the OSS, which was to keep an eye on two citizens who enlisted as pilot trainees. The government wanted to track these individuals as well as to place my grandfather in a position that would provide cover and access for later in his career. The photograph below was taken at Moffett Field and as I remember the story, the gentleman on the left was an Army doctor whose sister had sent a package with a fruitcake in it. The fruitcake was decidedly inedible and despite it being an Army base, they could find nobody who wanted to eat the fruitcake. It was subsequently decided that the fruitcake should be buried and a ceremony was deemed appropriate. So, with hands on stomachs and a reading out of the Manual for Army Cooks, the fruitcake was put to rest. 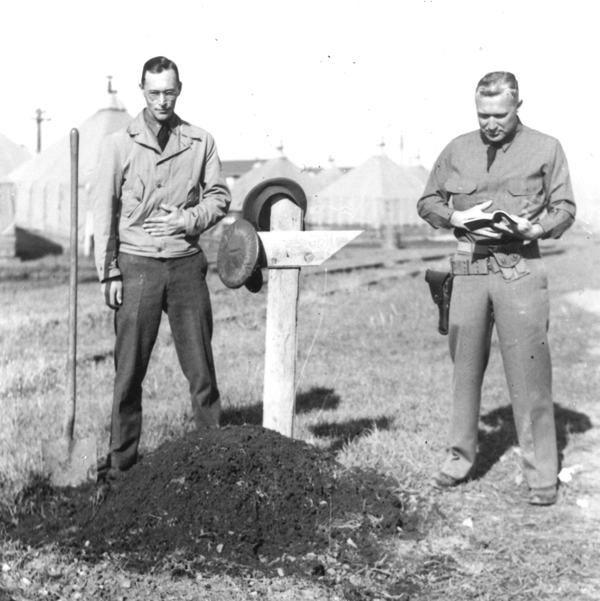 Aside from these assignments and fun, the remaining time at Moffett field was spent flight training in the North American BT-14 trainer (the aircraft seen in these photographs) before being assigned to the European and North African theatre of operations. These photos are the first of many from Italy, North Africa and more that will be forthcoming. 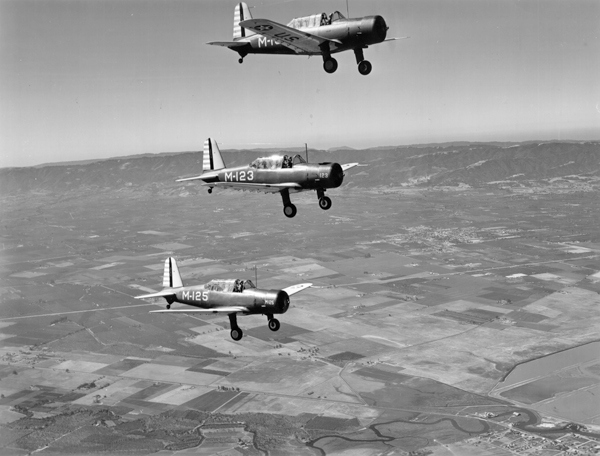 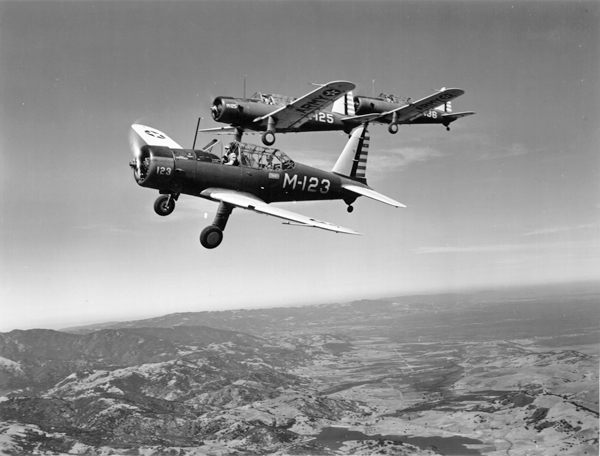 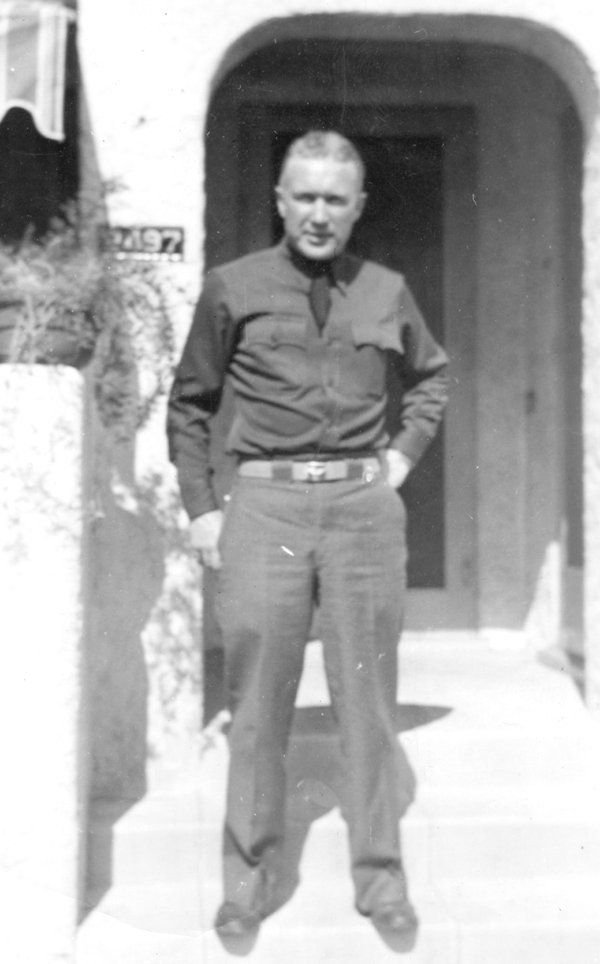 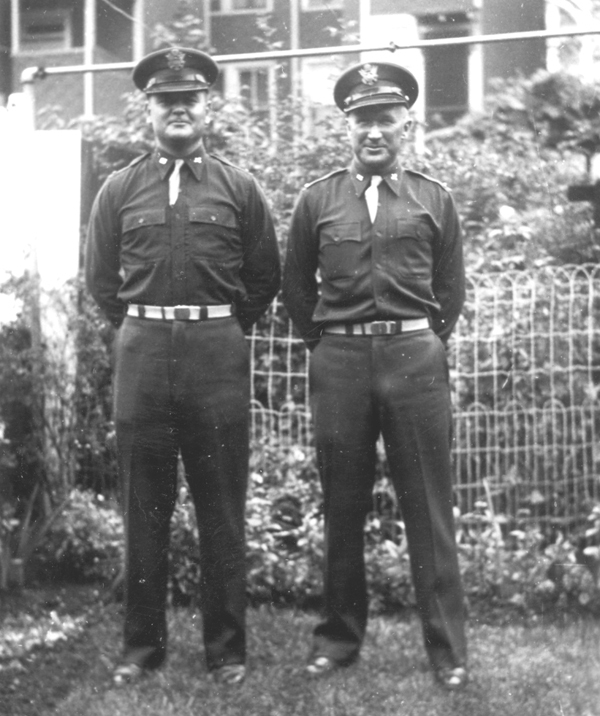