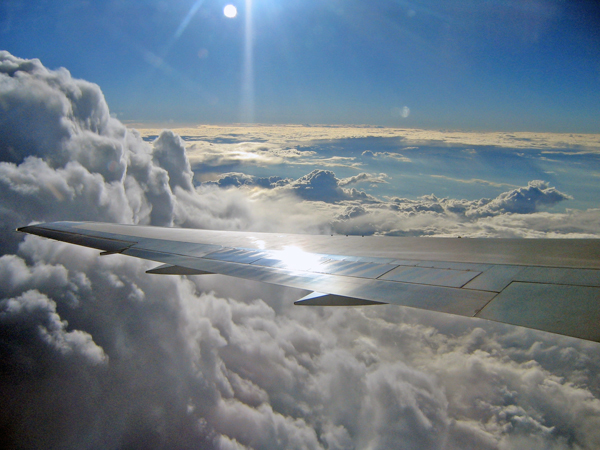 I really wish that I could capture images of what I am seeing. Right now we are about sixty miles East of Bogota, Columbia watching the most amazing electrical storm I’ve ever witnessed. Lightning is arcing miles through the atmosphere to jump from one cloud formation to another, while static electricity is jumping off and arcing from the leading edges of the airplanes wings. Other clouds are being illuminated from the inside almost constantly by lightning that appears to be completely internally contained while down below, veiled by low lying clouds is a huge fire that appears to glow and shrink like some ethereal, angry spirit. If I were not typing this, I would readily believe that I was dreaming.

It really is impossible to work or even sleep given the situation with my seat neighbor, so I just finished watching Ronin, directed by John Frankenheimer with Robert DeNiro on my Powerbook. The basic premise behind this film is not a new one, but it is well done and has one of the best car chase scenes in history.

I slept for a total of about two hours the entire flight caught in brief ten to fifteen minute naps. I am verrrry tired and we are heading into the international airport in Buenos Aires where we are not yet sure whether or not we are going to have to transfer to the domestic airport, Jorge Newberry airport. Apparently there is word that someone this weekend fell and broke her arm in the airport, so, this being South America, they had to shut the airport down, cancel flights and divert others…… This trip keeps getting better.

Flying in, we took an approach coming down the Paraná River where I caught this shot of the delta. It is a remarkably large river that from all appearances provides for the transport of an incredible amount of materials up and down the river. 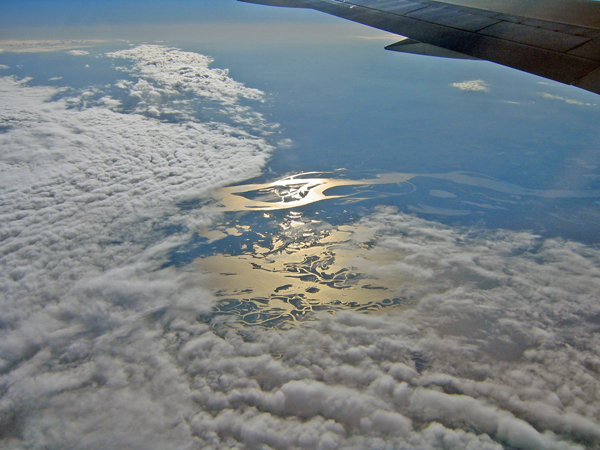 We continued on into Buenos Aires where I was surprised to see how flat things were. There also appears to be a fair amount of growth going on down here despite the inflation rate. Unfortunately, I was unable to get a shot of the main area of Buenos Aires from that air on this flight in. Perhaps on the flight out… 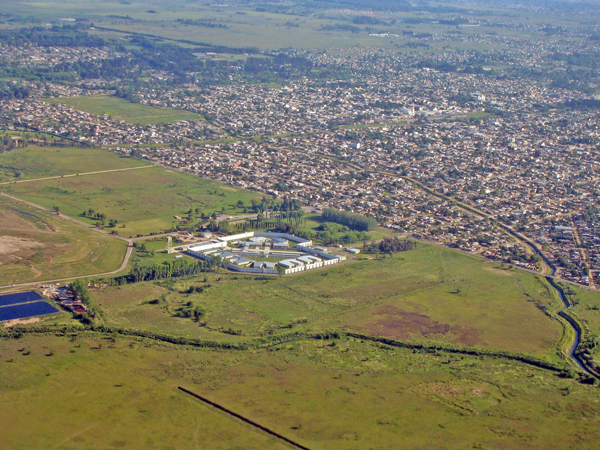 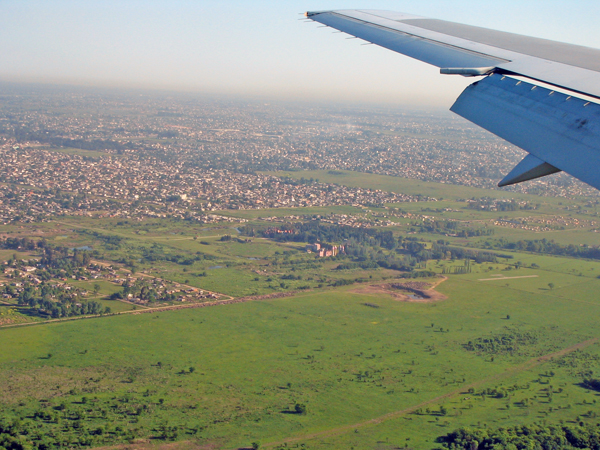 Well, the Jorge Newberry airport *was* closed, not because of the broken arm, because someone apparently died of a heart attack in line. Sorry to hear that, but why one would shut an airport down because of that is strange. Fortunately for all of those travelers going through, Jorge Newberry is now back open. Because of the delay, many Aerolineas Argintinas flights were cancelled including ours, but we were rebooked on an earlier flight and apparently are going to end up leaving the same time as originally scheduled due to a flight delay. South America apparently has a loose definition of “on time” as flights are routinely late here, trains are upwards of a half hour late or more and meetings can start anywhere from 30 minutes to 60 minutes later than scheduled. In the South American tradition, you do get there, just not when you might expect to or in the manner you might have planned. I have a feeling this sort of travel pace will continue throughout the trip…

Fortunately, the transportation *was* there at the airport waiting for us. We took a trip through Buenos Aires and I really wished I had more time to visit the city. Ideally, I should have scheduled a nights stay in Buenos Aires and then traveled on to San Carlos de Bariloche the next day. Buenos Aires is an old city and has not been planned particularly well with respect to getting around. Traffic was pretty heavy and judging by how bad this little ambulance was stuck in traffic, I’d not want to get hurt here. Lights and sirens were going, but it was hopelessly trapped in traffic. 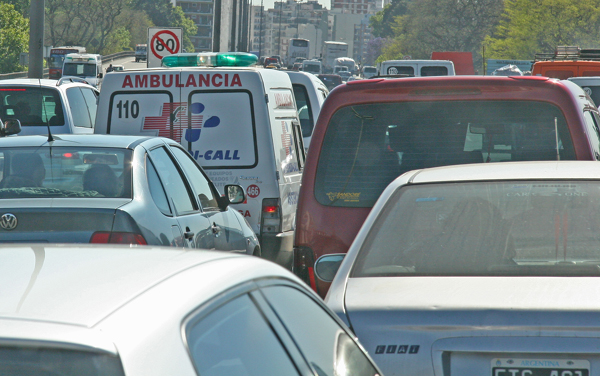 I would also have liked to spend some time around the central part of town, particularly along the 9 de Julio Avenue for photography, people watching and cultural immersion. 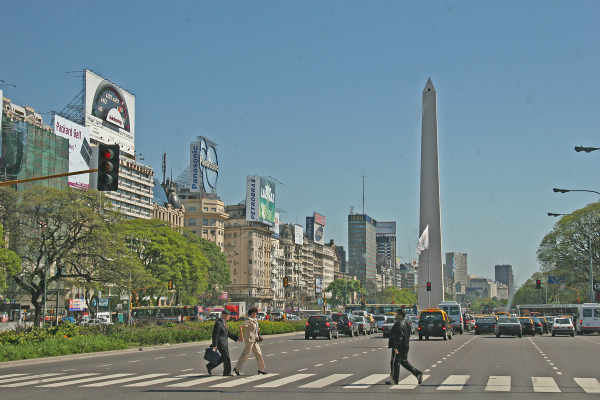 At any rate, we got to the airport without too much hassle and had a bit of a wait until our flight departed. It appears that we will be flying on one of Aerolineas Argentinas’s MD80s which means perhaps a tight seating configuration. 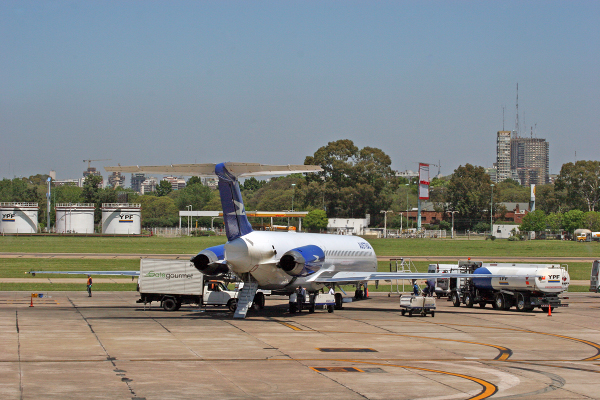 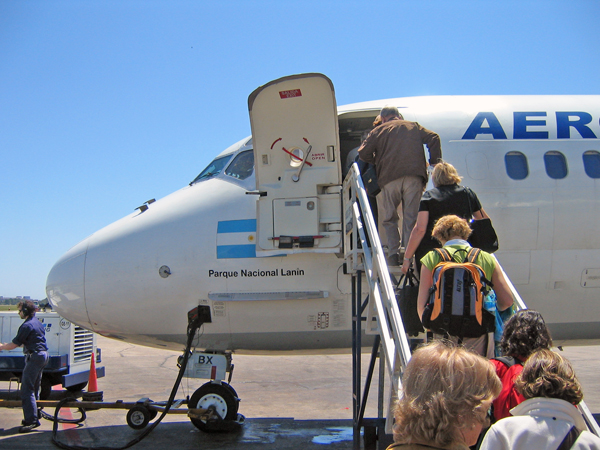 Interestingly, although I am having a tough time with my almost non-existent Spanish, I believe I understood the conversation of a couple of airport authorities on the tarmac who were discussing the closing of Jorge Newberry airport in the not too distant future because of a big bump in the runway. That said, takeoff was pretty smooth, so I either misunderstood the conversation or we seemed to have missed the bump in the runway. 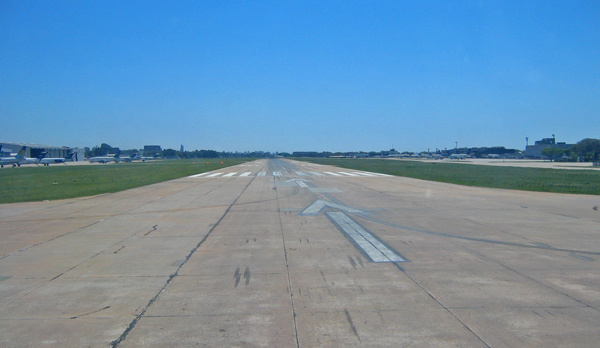 Unfortunately, I was sitting on the side of the plane with a view away from the center of Buenos Aires, so these are photos of the Northernmost portion of Buenos Aires and of the Hipódromo de San Isidro. I’ll try and get a picture of the greater Buenos Aires area on the way back as it is a stunningly large city. 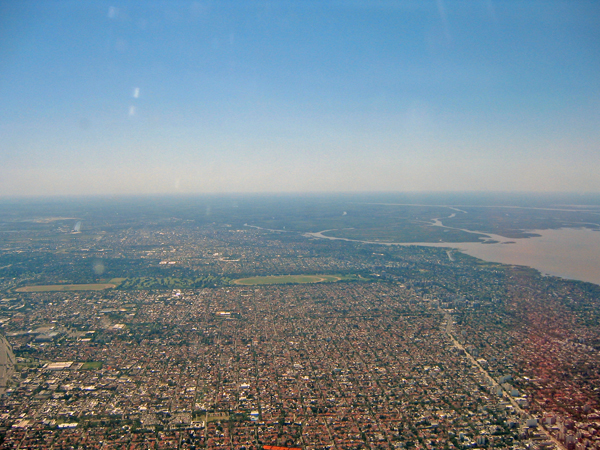 Yikes! We are flying in an MD80 and I am sitting next to the most ill behaved children evah! They are throwing food and toys, they are screaming, hitting each other, pulling hard and they are making a general racket, but it appears that their mother does not discipline her children, especially not the boys. I want out….. Think they have a parachute? On a more pleasant note, the seats in this Aerolineas Argentinas MD80 are not as confining as I was expecting.

The countryside seen out of the window is stunning with streams everywhere apparently laden with trout. I’d read that some of the best flyfishing in the world was down in Argentina, but I did not realize until getting on the plane in Atlanta that I would be going to exactly the destination for many fly-fishers. Had I known, perhaps I would have tried to pack in some fishing gear as well…… 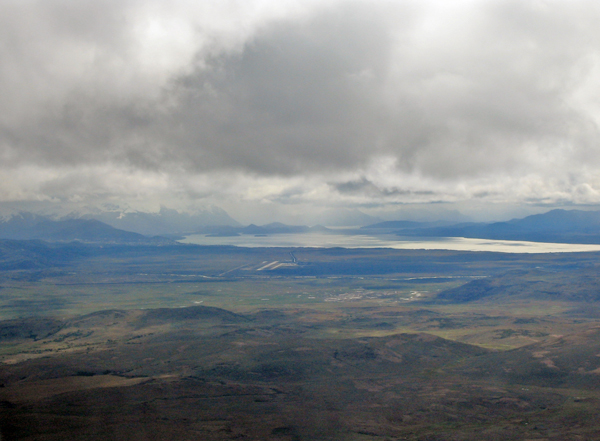 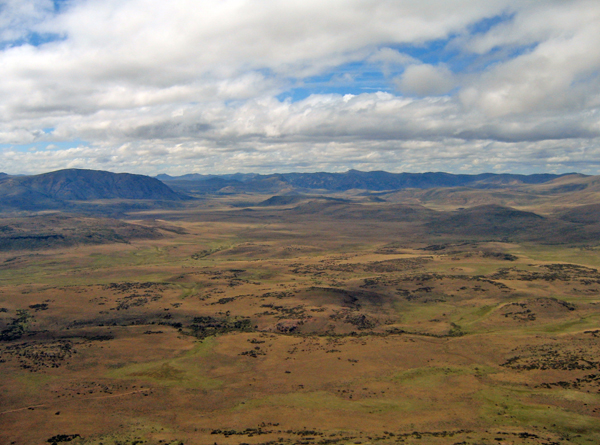 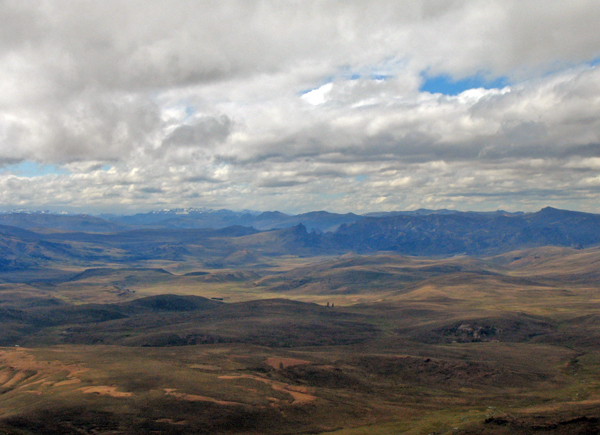 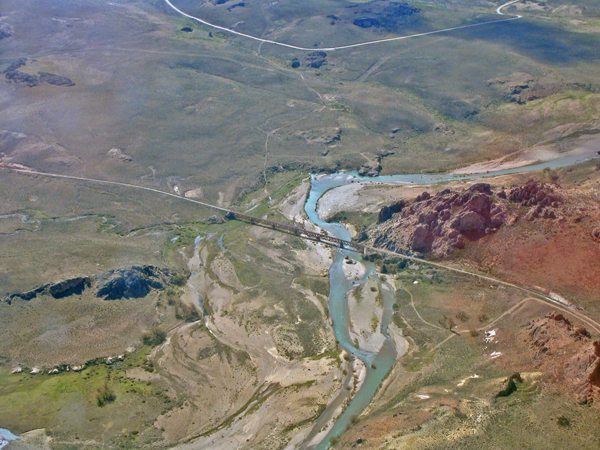 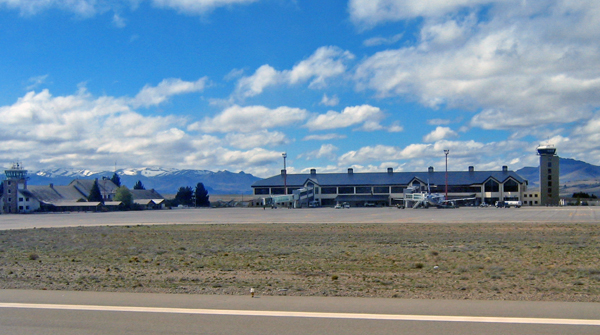 Well, I am now checked into the Hotel Panamericano Bariloche which is being billed as a five star hotel…… It is not. Despite their advertising it as such, it is closer to a one star hotel (if that) and the claims on their website about the rooms are simply an outright lie. The carpets are grubby and stained, my bedspreads are covered in cigarette burns and the room simply does not have any accessible electrical outlets other than in the bathroom where I am going to have to charge my Powerbook and camera gear. Additionally, the room is hotter than hell with no apparent way of cooling it off other than opening the window which lets in all the noise of the street and the casino downstairs. I have tried to close the valves on the radiators in the room, but no luck. Sleeping here might suck. Even worse, the website advertised that rooms had a private safe, and Internet access. I see neither and am forced to go downstairs to the lobby and sit in the front window of the hotel to get email and keep in touch all on a very narrow pipe. Perhaps the organizers of the meeting are in better diggs (Gene and-a Joe and-a who knows who (Matt and Nick)) typically fare quite nicely with their rooms and are likely comfortably ensconced in suites, but right now, I am less than pleased. Fortunately, I am at the end of a hall, so perhaps there will be less noise from the hallway. 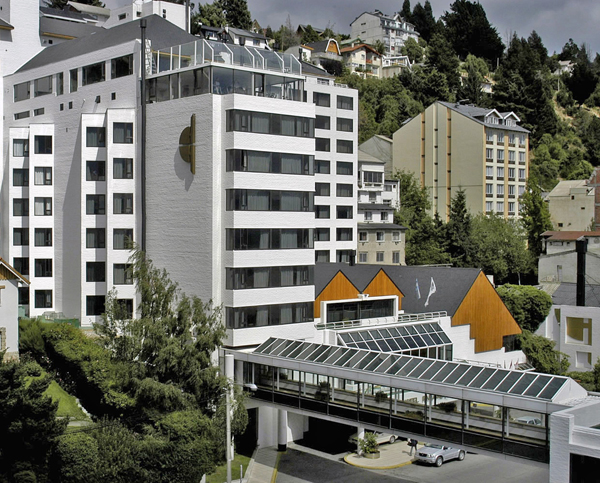 Given all of the airline chaos and other delays by British Airways, our keynote speaker Pierluigi Nicotera was unable to make it in time. We are going to try and reschedule him for later in the week provided he can make it. That said, Nick Bazaan gave a wonderful introduction and Ruben Adler gave a wonderful talk even referencing some of our work and showing images directly out of one of my reviews.

Robert and Ann have been taking language lessons down here for the prior week, so Robert and I were going to go out after the dinner and catch up with Ann who has been taking dancing lessons while we were at the opening of the meeting. The food here at the opening dinner hosted at the Hotel PanAmericano Bariloche was less than pleasing. I think that even though the food has been paid for, We are going to have to go outside the hotel and hunt up some food on our own that will be more appetizing. 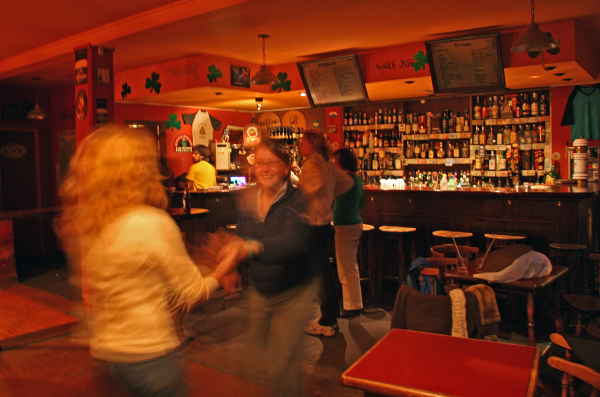