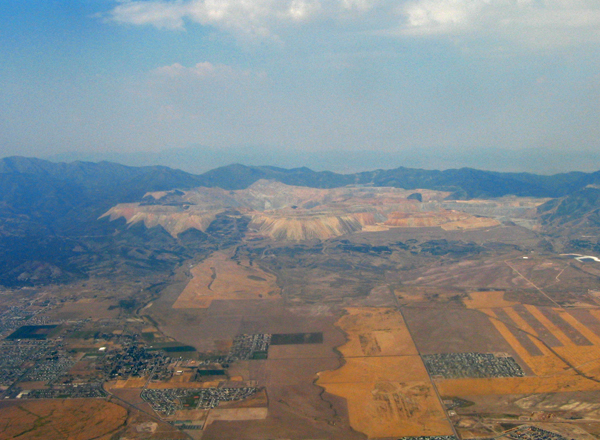 I’m in the Crown Room and hearing cell phones with obnoxiously loud ring tones followed by business speak like “escalating the issue”, “world class”, “team player” and “going forward” from people with waaaaay too much cologne on. *cough, cough*, Aaack! There also has to be some psycho-social issue related to people talking unnecessarily loud on their phones and for some reason, many folks when their phone rings, will stand up from where they are sitting, answer their phone and start to walk around the room while maintaining their loud conversation, disturbing others even in remote corners of the room. Right now, I have within a 20ft radius of me seven people talking on their cell phones and each one is trying to talk louder than the other. If it’s this bad in the Crown Room, I can’t imagine what it is like out at the terminal gate. Given the banality of these conversations, who is everyone talking to???

I am flying off to speak at the Bio Image and Informatics 2006 conference and will be back in SLC on Saturday. I would have liked to have flown in the morning of the seminar, but the only flight out from SLC is later in the day making my trip last about 24 hours longer than I would have hoped.

Because the trip is so short, it would have been easy to not have to check any baggage and carry everything on especially given that I am flying on a CRJ. However, the new travel regulations mean that I cannot take on a tiny tube of toothpaste, hand sanitizing gel, mouthwash etc…etc…etc… Of course, while a minor inconvenience this is yet another travel restriction making flying anywhere more of a hassle. In addition to being encouraged to show up at the airport up to three hours before your flight, removing even your sandals, belt eye-glasses and submitting to bag searches all seem like small things individually, but taken together they are at a minimum, becoming intolerable. More significantly, they are eroding our personal liberties and creating an additional tax on business and consumers that is reducing productivity and negatively impacting revenues. I wonder just how much more the flying public is going to want to tolerate for travel and what government policies will be put in place when the first person is discovered smuggling something in his/her colon. I guarantee that it happens with illicit drugs, so how hard do you think it would be to hide small, but effective and quite reactive amounts of metal salts like sodium? Any reasonably intelligent person when tasked, could figure out a number of ways to exploit or game the system to find weaknesses, but the especially important item to note, is that if someone knows what they are doing and is determined, no “weapons” of any kind are needed to kill. Through the use of everyday implements (even a rolled up newspaper or a bare hand can be an effective weapon) people can be seriously harmed or killed and the right person at the right time will provide appropriate access to deliver much greater harm.

Business travelers will have little choice (like me today), but I guarantee that I am much less likely to fly short trips for personal reasons, especially if we have to endure many more events like the recent security restrictions for trans-Atlantic travel where people were only allowed to carry on ID in plastic bags and having their car key fobs, iPods, laptops and other items confiscated from them. For some travelers who travel with sensitive or expensive equipment and want to keep it with them rather than check it, these possibilities are terrifying, especially considering the rate of theft in many airports, the possibility of damage to equipment with no recourse or responsibility being taken by either the TSA or the airlines. Stories of expensive camera lenses being damaged during inspection or equipment disappearing during transit seem to be more common and if the airlines and/or government cannot or will not guarantee that one’s luggage will arrive safely, then they will pay the cost in even lower revenues and decreased profit margins.

One would think that at some point the airlines would start to question these silly government policies and encourage the US government to focus on the real security issues and not obsess with toothpaste, baby formula, eye drops and gel filled bras. And while we are at it, what is the official TSA position on gummy bears? All of this is absurd really, and does nothing to help our security, especially with seemingly arbitrary rule sets like parents having to remove their shoes, while their little kids do not. Or how about the guy in the wheelchair that is ushered right around the security gate? I travel with with Carl, our laboratory expert in electron microscopy who uses a wheelchair and have seen him skirt right past security gates at the direction of TSA without even a glance at the pouch he keeps underneath his chair with tools and spare tubes for his wheels.

The reality is that there are simply too many potential targets and target hardening everything is simply untenable. The post office system, rail system, ports, public access to buildings and transportation infrastucture, even automobile travel through large cities are all potential targets. Focus on restriction of personal liberties and spending literally billions on technologies that cannot possibly prevent all of the potential ways to cause mayhem and destruction are useless unless we begin to focus on the fundamental issues associated with the spread of terrorism……..

What are the solutions? I expect that Fed Ex, UPS and DHL could be getting a bit more business if they were smart about it. They could set up kiosks in airports or even hotels to allow for the possibility of passengers to mail themselves their luggage WITH insurance that could generate extra revenues. Hotels could also provide these services, for additional elusive revenues. After all, if I were concerned about shipping a valuable item like a camera, computer or firearm, I certainly would not trust the airlines themselves to handle it.

I’ve already heard about changes that many large corporations are enacting including decreasing their air travel, the wider application of encryption with laptops, enforced data backups, preferred seating for certain critical employees, and for large corporations and those with resources where time is critical and expensive, I expect will turn to more private aviation. For others including small business, I expect a migration to jet taxies that are currently under development from a variety of manufacturers including Honda , Eclipse Aviation, Cessna and others who are all working to develop small fuel efficient jets that can fly in and out of tertiary airports with far more convenience and lower cost. Short term solutions for the general public are exercising your right to vote for those policy makers you feel will make the right foreign and domestic policy decisions and your first opportunity at the national level comes in November.

Long term solutions are are more innovative and creative than those currently under way with foreign, domestic and military policies. There are some isolated examples of the right approach such as General Abizaid‘s use of his command in the Army to create infrastructure in order to combat radicalism. General Abizaid prefers to use the term “Long War” instead of the “Global War on Terrorism” for a variety of reasons related primarily to the recognition that the War on Terrorism has deeper roots that must be addressed in unique ways. He’s been quoted as saying that “Military power can gain us time……. but that is about it.” and I think he is right as this is far more an economic war than it is a militarily strategic war. Battles will be fought with a variety of disenfranchised peoples as economies progress from the developed world to third world nations or what Thomas Barnett calls “Gap Nations”. The smart money will be on approaches designed to deal with the underlying motivations and integrate these Gap nations through financial air, building infrastructure and enfranchising peoples rather than relying on military interventions to destabilize one bad actor after another.