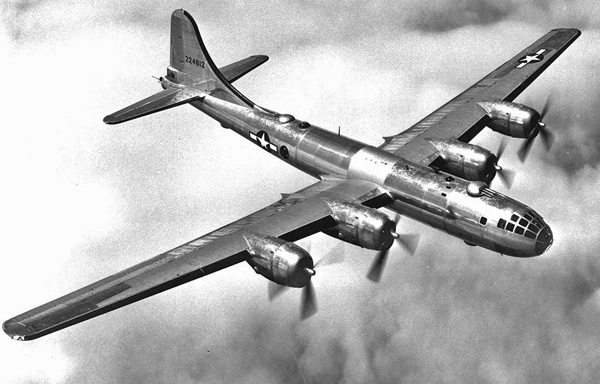 I had the privilege of seeing a B-29 in flight once. Walking to the lab one morning, I heard this terrific rumbling sound that I immediately recognized as a radial engine. But the rumble seemed much richer and deeper than the usual radial engines one hears in the summer on the old fire fighting planes based on Neptunes or Orions. I wheeled around and saw to my shock and amazement a B-29 flying around the valley. I watched for over half an hour while the plane flew circuits around the Salt Lake Valley. I was simultaneously grateful for the experience while also cursing my lack of a camera.

It must have been an amazing experience to see, hear and feel hundreds of them in the air all at once back in the 1940’s. My grandfather used to tell me about watching hundreds of bombers take off for massed missions from England, Italy and North Africa. The logistics of launching that many planes with the available technology of the time meant that often, you would lose more than a plane or two just getting them all in the air and into formation.

So, the place where I stopped after last weeks event was designed to develop and change all the tactics associated with putting dozens or hundreds of planes in the air at the same time, and the B-29 would play a central role in that place and time. This place, the Wendover Army Air Field, was the testing ground for the first crews who dropped the atomic bomb and bringing about the close of World War II. Back in college, I first started coming out here to help teach SCUBA diving at a hot springs lake about 15 miles to the South of the old airfield. We’d even rent a Cessna and fly into the airport on occasion when schedules were tight, but I had no real idea of the history of the place until after making the trip a couple of times and starting to wonder about all of the old hangars. Wendover seemed a strange location to place such an infrastructure, so I started some historical research and was stunned to find out just how much activity went on here over the years.

Even more surprising is that the facilities are still used to some extent as demonstrated by the presence of this active radar tracking installation. It is also used on occasion as an auxiliary landing strip for the Air Force when needed. Some years ago when Ray and I were flying out, we heard an unusual message from “Wendover Air Control”. I say unusual because Wendover was a facility that did not have an active tower at the time, much less a radar installation and you typically simply announced your intentions on the appropriate frequency when landing. Wendover Air Control directed us to fly directly over I-80 and not to deviate in any way to the North or South which further intrigued us. As we approached, we could see a black pall of smoke to the North of us on the desert floor and were then informed by Air Control that we were to land on a very specific runway which proved problematic as it required some maneuvering to avoid airspace North or South of the airport. At any rate, upon approach we could see a number of F-16s on the tarmac and the closed runway along with some CH-53s. We landed, tied down and went to close our flight plan. It turns out after talking with an F-16 pilot in the lounge that there was a surprising accident that had spooked the Air Force a bit as two F-16s had almost simultaneous problems with the aircraft causing a loss of power. One of the F-16 pilots had to eject while the other was able to make it to Wendover. We never did find out any more details. 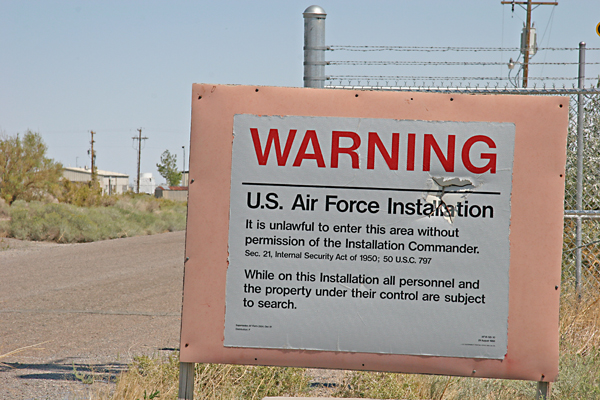 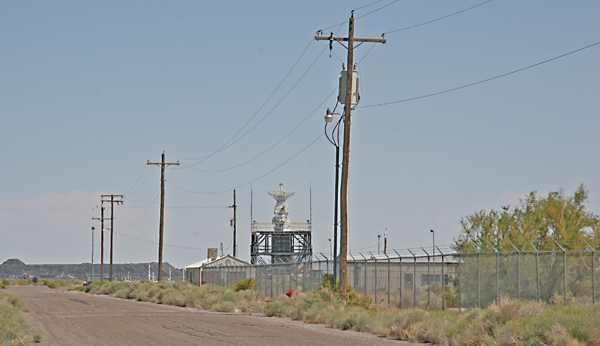 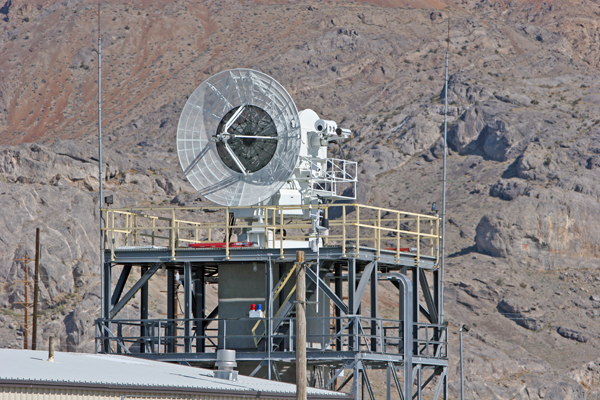 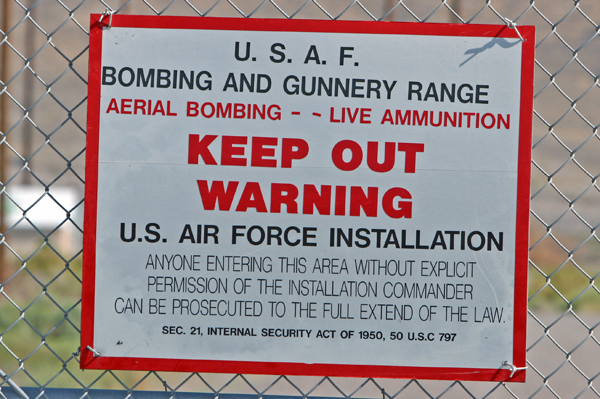 As to the airfield, there are still many structures left standing after over 50 years. The Atomic Mission Hangar 1831 was built to house the the then new B-29 bomber. It was often referred to as the “Enola Gay” hangar as the 393rd Bombardment Squadron of the 509th Composite Group used this hangar for their operations and maintenance of the B-29 bomber that dropped the first atomic bombs on Hiroshima and Nagasaki. 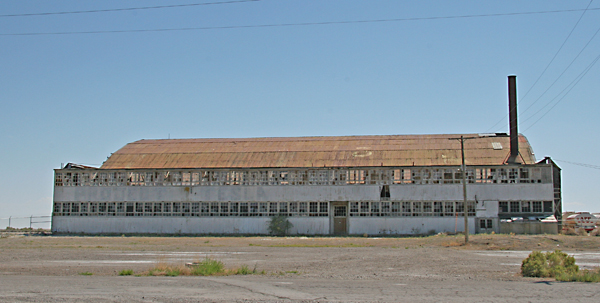 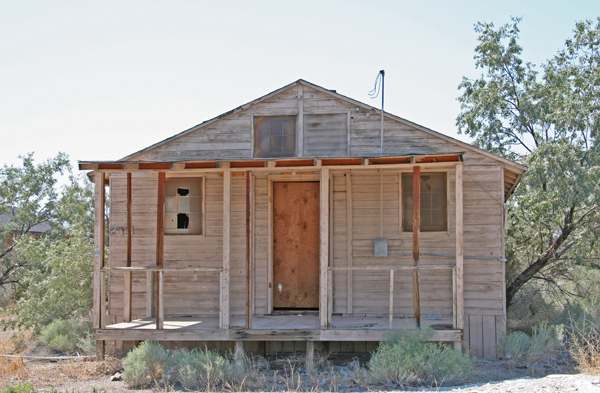 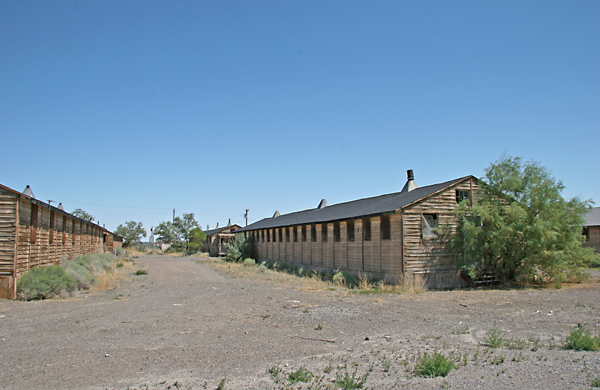 It turns out that my degrees of separation from the history of this place are fewer than I had thought as my grandfather was stationed in North Africa with Paul Tibbits Sr., the father of Paul Tibbits Jr., the man who commanded the Enola Gay. Interestingly Paul Tibbets the grandson, is now flying the B-2 Spirit in the same unit that his grandfather commanded. 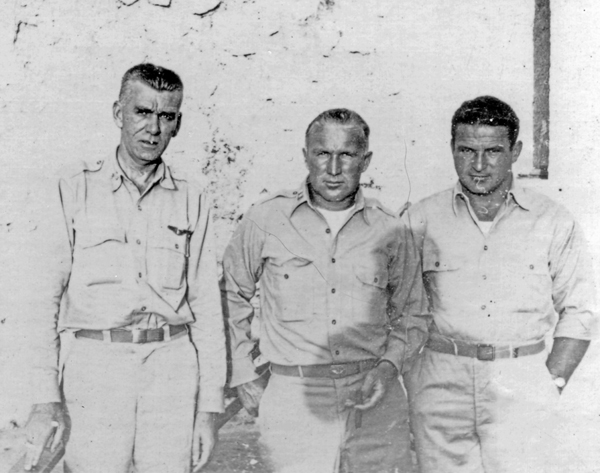 In the above photo, Tibbets Sr. is on the left, my grandfather is in the center and the gentleman on the right is unidentified. I have many more previously unpublished photos like this that were given to me in a shoe box after my grandfather died. The plan is to start posting these images under this new history category on Jonesblog that will be populated by assorted images and entries related mostly to the history of WWII.