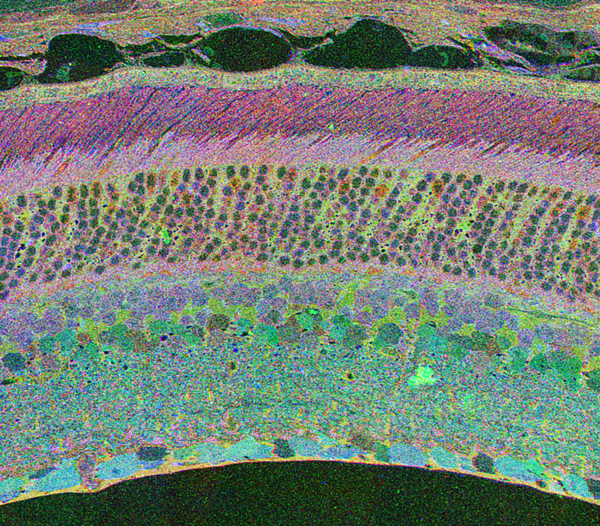 The symposium this year is focused on retinal degenerative diseases such as retinitis pigmentosa and macular degeneration that afflict millions of people around the world. The idea of this symposium was to bring some of the worlds pre-eminent vision scientists together to learn and discuss their intimate knowledge of the normal functioning of the retina and how it changes in disease. Furthermore, we discuss current and proposed clinical applications, dietary management, management of vascular changes seen in macular degeneration, growth factor delivery, gene and cell based therapies and retinal cell replacement by biological and bionic means.

The meeting started off with a welcome, introduction and overview by our chairman, Randall Olson, Raymond Lund and Alan Bird, followed by an introduction to the session by one of the historical giants of vision research, Helga Kolb. 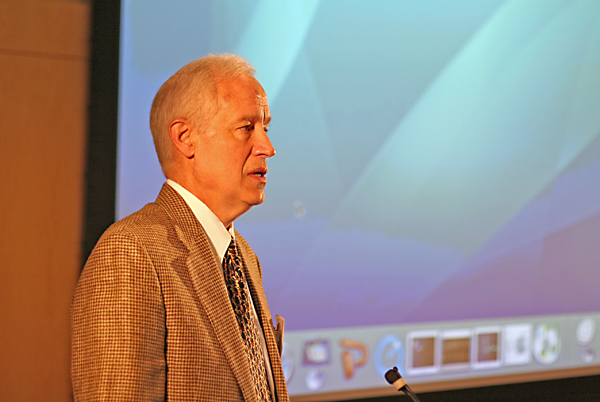 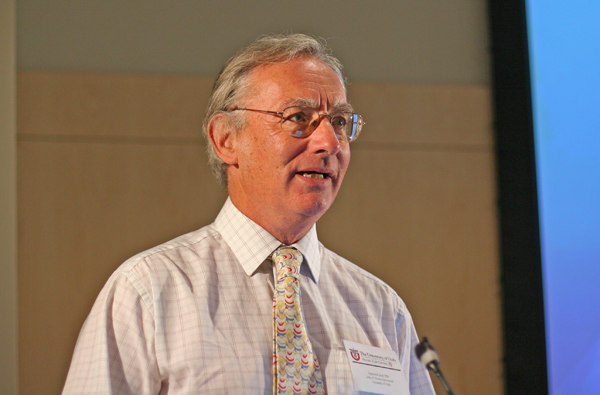 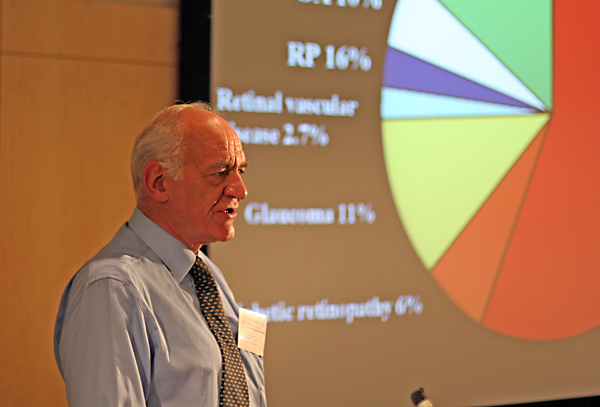 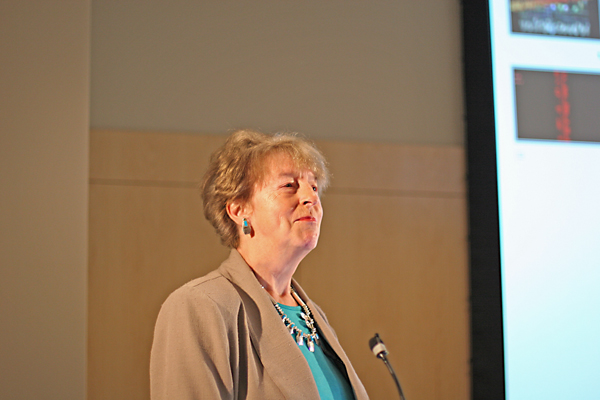 Helga Kolb talked about the structure and organization of the retina and how information flows through the retina and out to higher cortical structures. This set up the rest of the seminar series to come by outlining the basic circuits and information processing that occurs and laid the groundwork for discussion of what happens to circuits in retinal degenerative diseases. 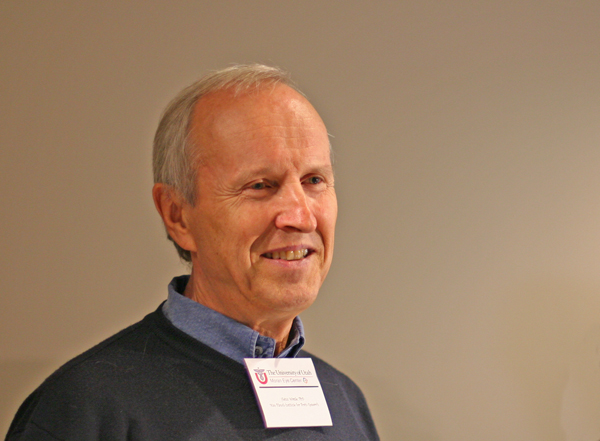 Helga’s talk was followed up by another one of the giants of vision research, Heinz Wässle who spoke of the primordial, blue-cone color system in the mouse, but also talked about some of the basic circuitry of the retina and where parallel processing occurs in the mammalian retina. It’s always a joy to listen to Heinz speak. I’ve been going to his presentations at ARVO for a few years now and his talks are always clear and concise and based on almost irrefutable data. 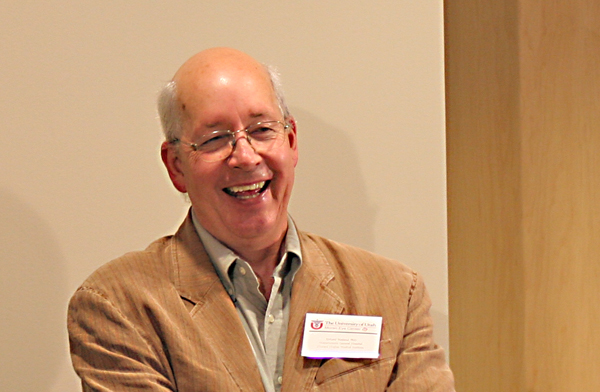 Richard Masland yet another giant in the vision field (we have lots of them here this week), then spoke on his favorite subject, the neuronal populations of the retina, which most folks agree on approximately 55-60 types of cells in the mammalian retina. He had some wonderful figures, but it should be noted however, that we mammalians have simplistic retinas as our human eyes are pretty pathetic in terms of their sophistication. Birds, fish and many reptiles have much more sophisticated retinas that perceive what we would term a multi-spectral visual world. A visual scene much richer that the simple three-space world we currently see. Richard finished off his talk by discussing the current challenges to defining the cell types and associating them with each cells distinctive physiology that turns out is surprisingly different amongst various mammals. 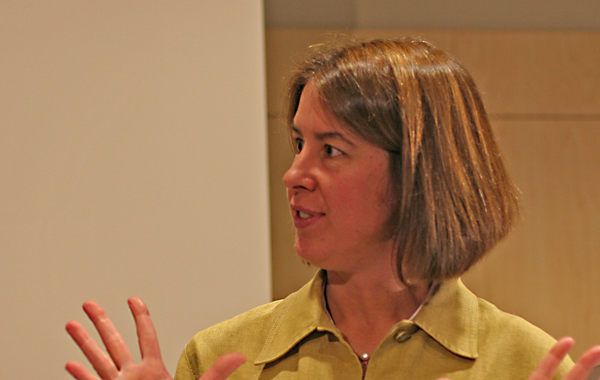 Monica Vetter, one of our own developmental biologists here at the University of Utah then spoke about the development of the neural retina. She spoke about the process of normal development in the retina where progenitor cells acquire, then maintain their neural “potential” which allows them to initiate expression of genes required for neuronal differentiation. Specifically she talked about the Sox2, a HMG box transcription factor pathway controlled by Wnt/b-catenin signalling through the Fz transmembrane receptor Xfz5. 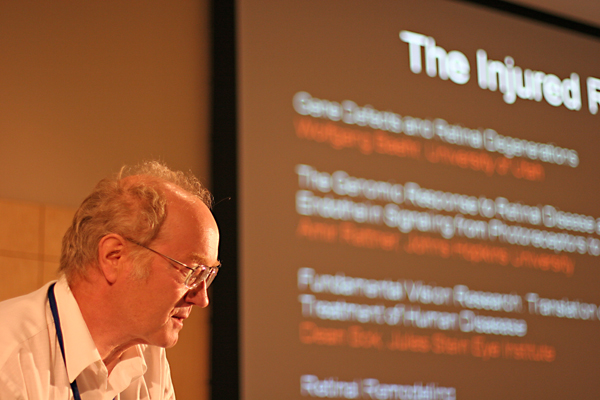 Wolfgang talked about the phototransduction cascade and the retinoid cycle and summarized for us our understanding of how gene defects in those pathways might cause retinal disease. It turns out that just like cancer, there are literally thousands of ways that people can go blind due to abnormal biology as defects in genes encoding a variety of components in these cycles can have deleterious effects on biological processes ultimately killing photoreceptors. Diseases Wolfgang talked about include congenital stationary night blindness, retinitis pigmentosa, Leber’s congenital amaurosis and macular degeneration. 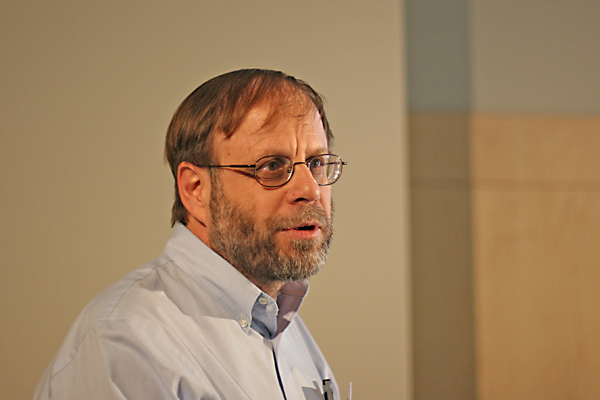 Amir Rattner then spoke of the evidence for endothelin signaling from photoreceptors to glia. His thesis was that the photoreceptor damage response most likely developed to protects themselves from a variety of environmental insults including infection, retinal tears and detachment and……….. damage due to light itself. So, any damage that impacts the photoreceptors will activate the glial cells of the retina, the Muller cells. Of course this implies that there is some signaling system between Muller cells and photoreceptors and Amir spoke of their work in this area. 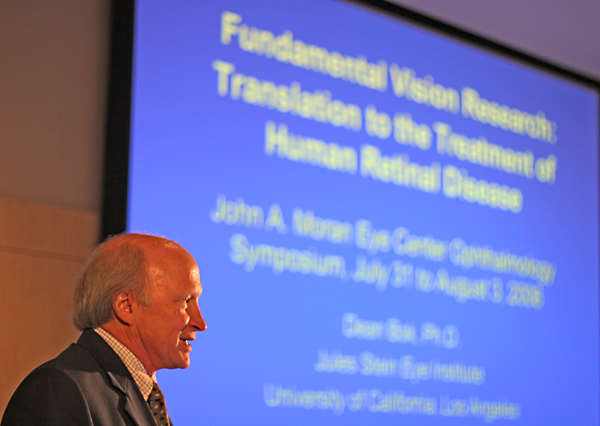 Dean Bok then spoke on translation of fundamental vision research into treatment of human disease. He did not want any of his talk recorded, so I will refrain from discussing any of it here. Suffice it to say that it was a pretty cool talk. 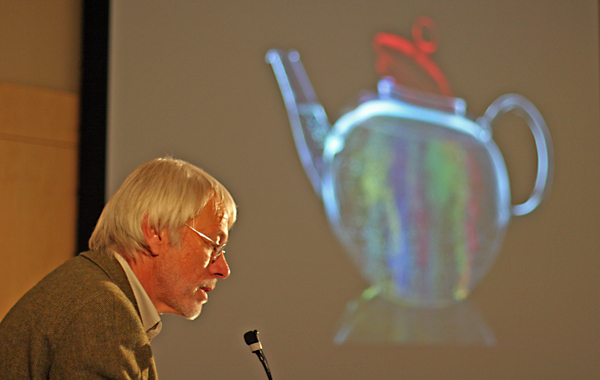 My former mentor and our director of research here at the Moran Eye Center, Robert Marc then spoke on a topic near and dear to my heart since it was the focus of my doctoral dissertation, retinal remodeling. Inherited retinal degenerations deafferent the sensory retina and trigger three phases of remodeling in the neural retina. In Phase 1, activated by photoreceptor stress, bipolar and horizontal cells synaptically disconnect and/or generate novel processes. In degenerations that kill both rods and cones, phase 2 entombs the neural retina beneath a glial seal. Phase 3 represents a long period in which dynamic processes (neurite and fascicle formation, synaptogenesis, self-signaling and migration) are unmasked as the neural retina is freed from the control of the sensory retina. Substantial neuronal death occurs in some degenerations, which compromises the ability to “rescue” it by cellular or bionic strategies. Moreover, rewiring generates novel circuits that are explicitly inappropriate for visual processing, but likely represent self-signaling survival mechanisms for neurons. In cone-sparing degenerations, phase 2 is prolonged, as cones rescue some rod bipolar cells by permitting ectopic contacts. These contacts may trigger revised gene expression in rod bipolar cells, and we have now obtained evidence of apparent ON-to-OFF phenotype switching. It is clear that connectivity in the mature retina is as dynamically regulated as in adult hippocampus or cortex. Indeed, neuronal remodeling is the penultimate defect in temporal lobe epilepsy, as is corruptive remodeling in the neural retina. This capacity to rewire challenges cellular, bionic, molecular and genetic interventions to restore visual capacity. It is also an opportunity, as molecular techniques to guide and inform neurons may permit the generation of interfaces between the remnant retina and bionic devices. 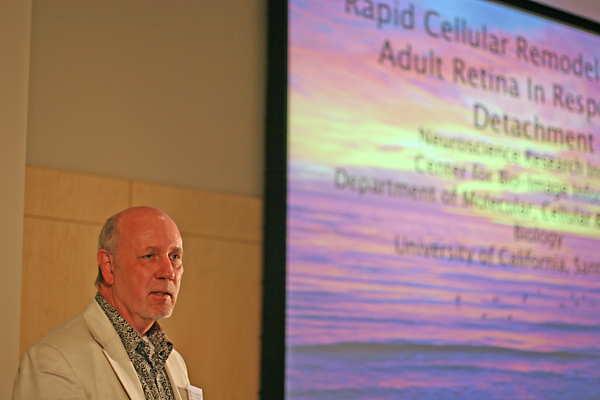 Next came my good friend from UCSB, Steven Fisher. Steve talked about retinal remodeling in the injured adult mammalian retina using retinal detachment as a model. The work that has come out of Steve’s lab over the years has helped us to have a better understanding of what exactly happens in retinal detachment and has illustrated the importance of reattaching the retina when it detaches either through intrinsic defects or trauma. Steve illustrated the unpredictable and unpreventable changes in retina due to cellular growth that resembles glial scar formation in the brain and spinal cord. He also talked about some of the cell specific changes in retinal detachments that are similar or identical to those we see in retinal degenerations. Specifically, the the rod synaptic terminal remodeling involving withdrawl of the terminals from the OPL and remodeling the synapse itself. He also noted that cone synaptic terminals do not withdraw, but the synapses *do* remodel. Steve also talked about some of the changes seen in the Muller cell populations of the retina and the differences between species. For instance in mouse retina, Muller cell activation by injury leads to rapid upregulation of GFAP, but small changes in vimentin expression and slow formation of subretinal scars. However in ground squirrels, Muller cells are rather non reactive even in the face of essentially complete photoreceptor cell death which may lead to some ideas on how ground squirrels hibernate. 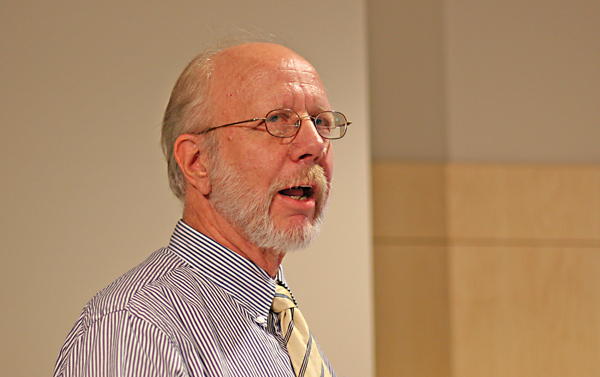 Richard Normann from our bioengineering department talked about his cortical bionic prosthesis, the Utah array. Basically, Richard is proposing to bypass the retina and optic nerve and stimulate the visual cortex directly through a bionic implant that is connected to a camera system. Richard reviewed some of the work by earlier bionic implants from Dobelle and others, talked about some of the problems and technologies involved in bionic implants and then introduced the next two speakers. 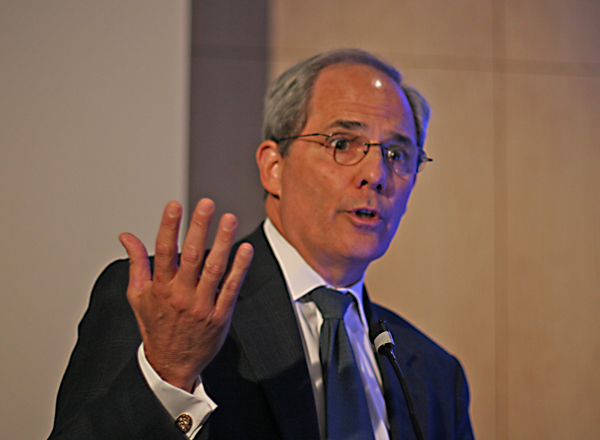 Joe Rizzo also specifically requested that his presentation not be recorded, so I will not discuss much of that further except to say that their Boston Retinal Implant Project is tres cool. I also really liked the organization and academic approach to the problem as well. 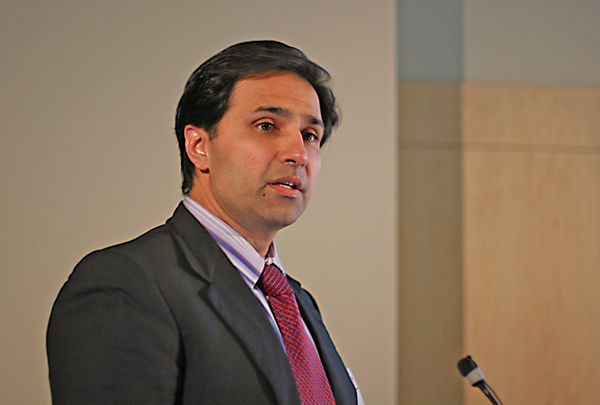 Mark Humayun was the final speaker for todays session and he talked about his results from a chonically implanted 16-channel epiretinal prosthesis in a blind patient. These guys with the Doheny Retina Institute and the Second Sight Medical Products company were some of the first to use retinal implants. They were also reluctant to have their work recorded, so I will not cover it further here.

So, that ended todays seminar, but tonight we have a dinner and tomorrows sessions cover rescue and replacement of retinal cell populations and clinical treatments with the final session on the 3rd covering translational research and the patient.

After the sessions, before dinner and in-between the sessions there was a little bit of time to visit and catch up with colleagues from around the world. 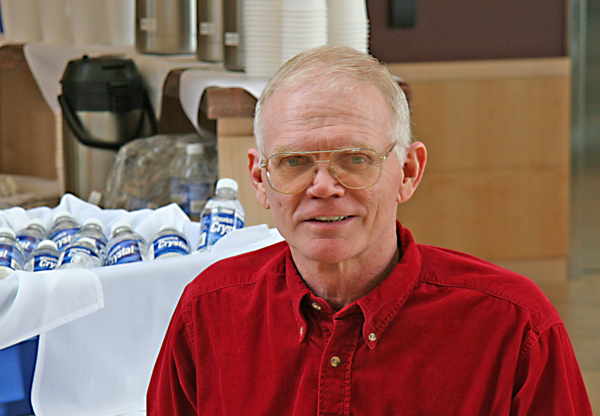 Carl Watt, our electron microscopist in the Marc laboratory. 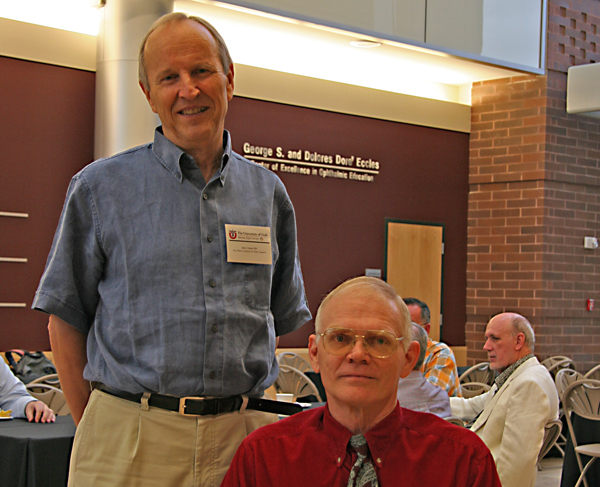 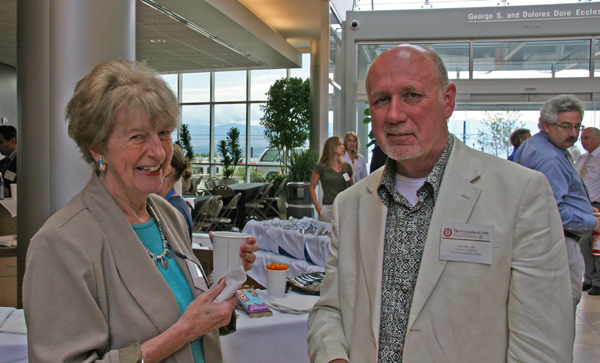 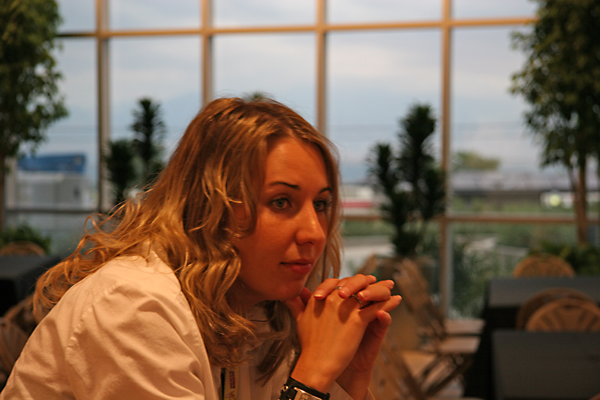 Jennifer Singleton, our administrative assistant who along with Julee Lamothe worked so amazingly hard to make this meeting happen. 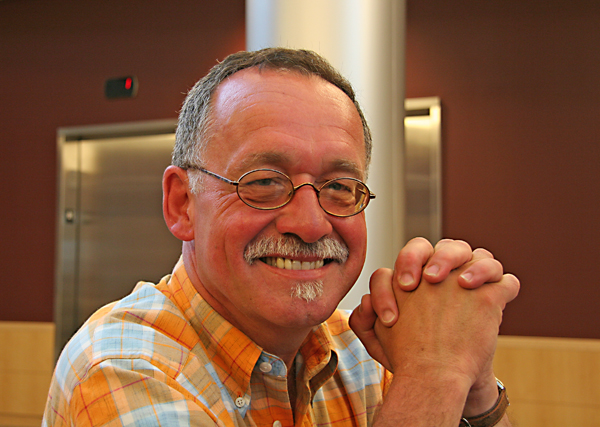 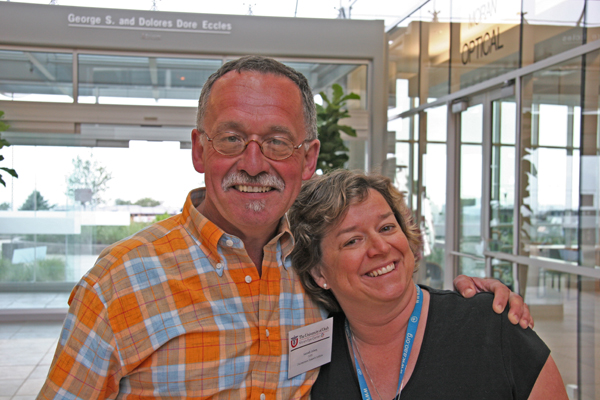 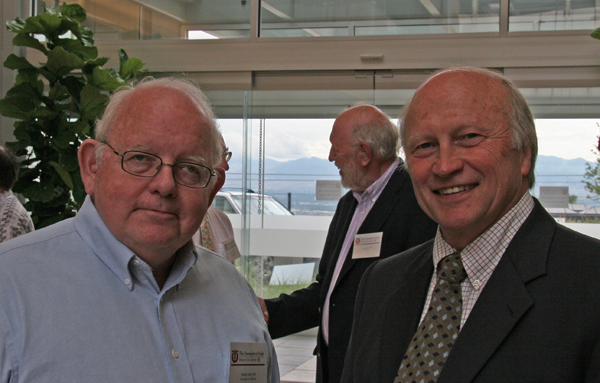 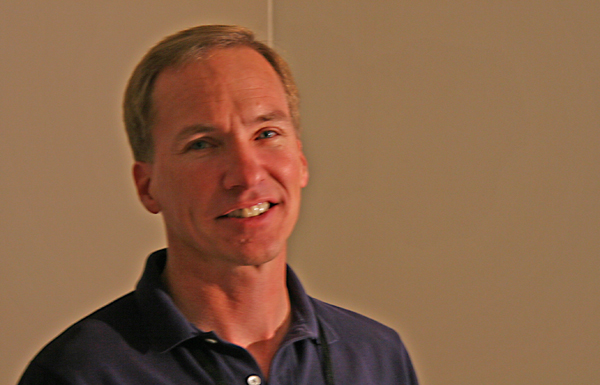 Randy, our new AV guy here at the Moran who helped to work ensuring that our presentation went smoothly. 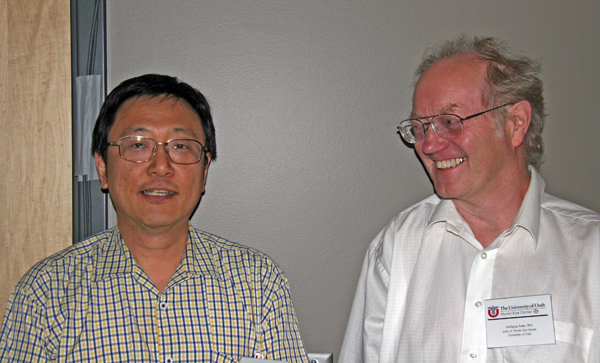