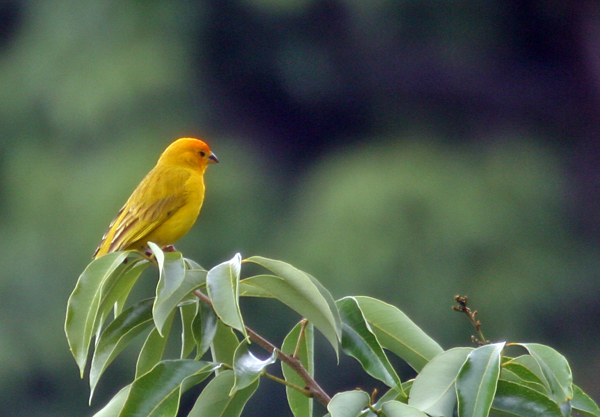 “I think the Kona coffee has a richer flavor than any other, be it grown where it may and call it what you please”.
–Samuel Clemens, 1866.

We got up for a leisurely morning coffee followed by a trip over to Kona to visit with some wonderful people, Jim and Anita of Aloha Island Coffee. They were kind enough to give us a tour of their plantation and provide us with some of the Kona coasts best whole bean coffee.

There are hundreds of Kona coffee plantations throughout the Kona coast, but not all plantations craft equal beans. It turns out that different farms produce varying qualities and quantities of beans and back in 1999, the Hawaii state legislature required all coffee leaving Kona to be certified and graded according to very strict standards. Namely, all beans must contain a moisture content of 9-12.5% followed by size criteria that ranks the beans into size and number of imperfections. Kona Extra Fancy is at the top with large two beans per cherry, or fruit unless it is a peaberry which only has one bean per cherry. Furthermore, the beans have to be flat on one side and rounded on the other or if the bean is a peaberry, it has to be round. Kona Fancy comes next, followed by Kona #1 and then Kona Prime. 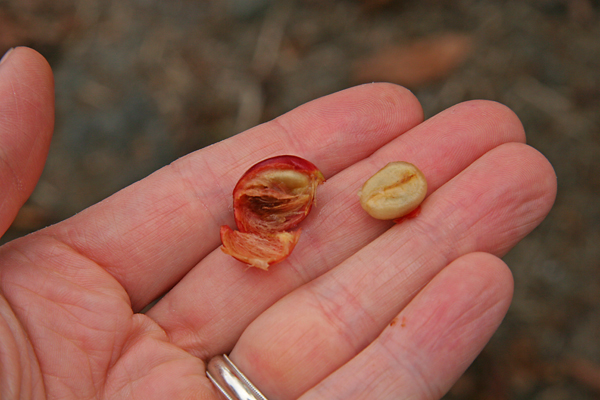 We were amazed at how beautiful the plantation was. There were bird species of all kinds around the plantation with the most beautiful saffron finches (Sicalis flaveola) seen in the introductory image, flying around along with yellow billed cardinals (Paroaria capitata) and even turkeys (Meleagris gallopavo) wandering about making for some rather pleasant bird watching. The other animals that we saw in abundance were Mongoose (Herpestes edwardsii) or as locals call them, the Hawaiian squirrel. 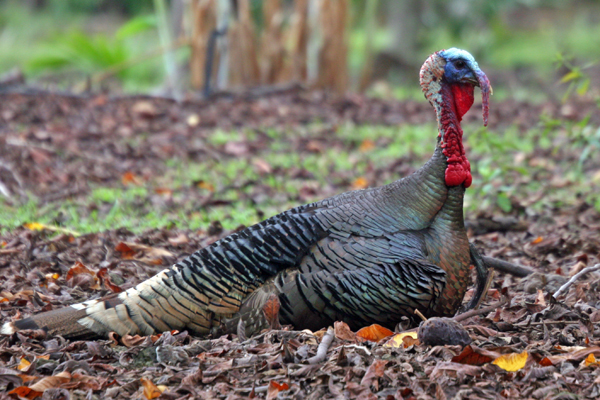 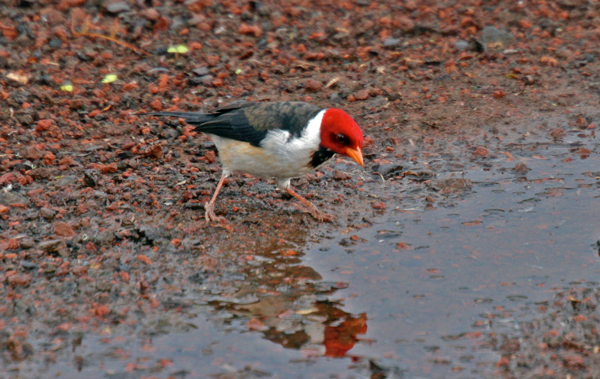 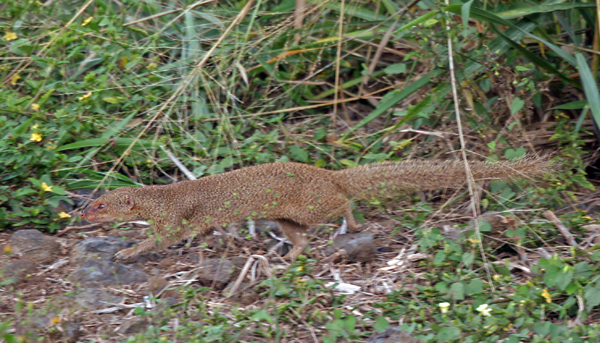 The real treat aside from getting to spend some time with Anita and Jim, was learning about how one of our favorite beverages is crafted. It turns out that making coffee is fairly hard work, and there are environmental concerns in addition to the labor concerns. As such, there are areas of the globe that make for some of the best growing conditions for coffee trees and the Kona coast with its mild climate and well drained, fertile soil could be argued as the best, providing year round optimal conditions for coffee trees to grow and fruit. In fact, individual branches can in one season grow from a shoot to a full fruit bearing branch. This of course is carefully guided as the trees are pruned and cared for to maximize the harvest. Trees typically are pruned to allow each tree three to four vertical branches which provides an optimal amount of effort into the Kona coffee fruit. Learning about all of this, I expected the soil to be rich and loamy. However, I was rather surprised to find coffee trees growing right out of volcanic rock. 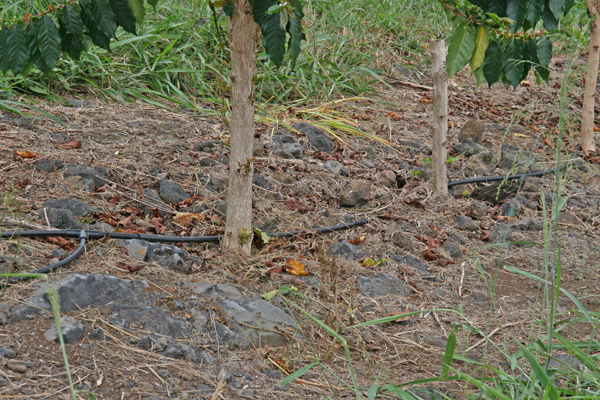 The coffee tree cycle typically begins in the winter with small white blossoms that we unfortunately, just missed. The white blossoms fall from the tree and are called Kona snow that signals the beginning of the Kona coffee harvest. From the blossom, the fruit begins to mature into a green fruit and from there into a red cherry. If not picked the red cherries start to wither into what is called a raisin and interestingly, you can have all three stages on a single branch from green to red to withered raisin. Harvesting begins at the red cherry stage and typically lasts from late August to early January all along the Kona coast. All coffee is hand picked and is essential to ensure a quality harvest as each bean is carefully assessed for its ripeness and quality of the bean. 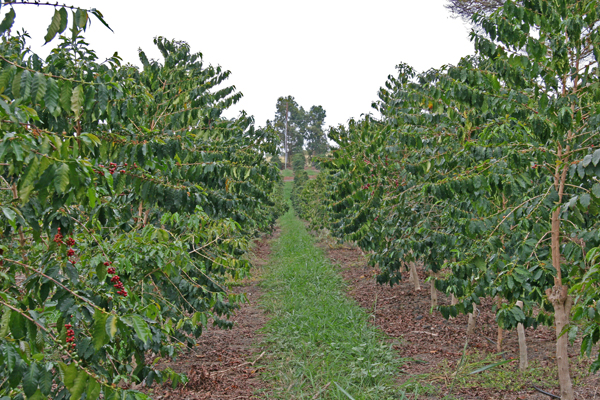 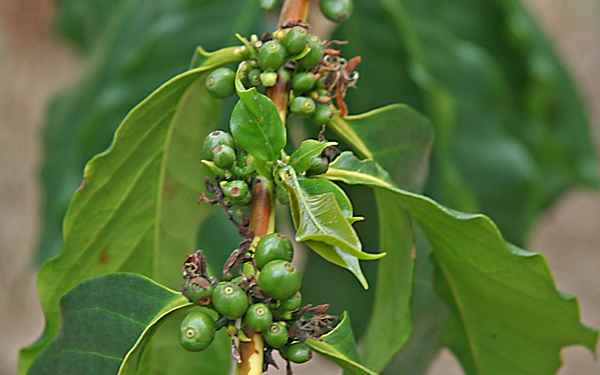 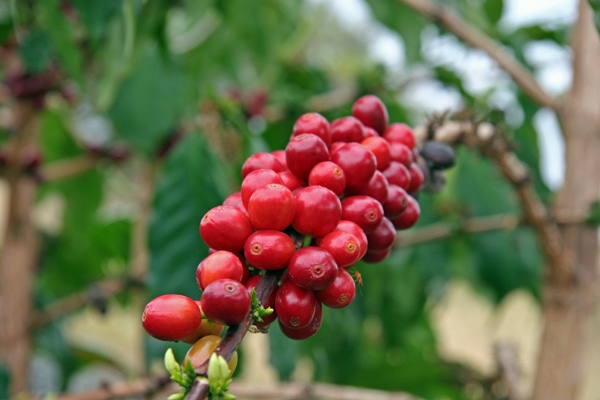 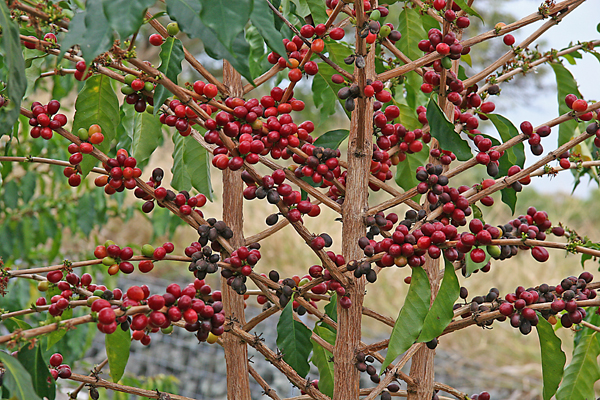 Once picked the red coffee beans have to be stripped of the outer fruit and membranes covering the beans by special pulping machines and then allowed to sit for 24 hours until washing and then drying. It is at this stage that the beans can be aged to balance flavors before milling to remove the final coverings on the beans. After milling, the coffee beans are ready for careful roasting before packaging and delivery.

The history of coffee on the Hawaiian islands goes all the way back to 1825 just after King Kamehameha II and his wife died of the measles in London, England. The British government agreed to transport their bodies back to Hawaii, then called the Sandwich Isles, on board the HMS Blonde under the command of Lord Byron. On board was also Chief Boki who was the then governor of Oahu and upon a layover in Brazil, purchased some Arabica coffee trees to plant back on Oahu. From there, the coffee trees made it to other islands including the Kona coast of the Big Island through the efforts of the Reverend Samuel Ruggles in 1928 after the world coffee market collapsed at the turn of the 1900s. Because of this collapse, most large coffee plantations in the Hawaiian islands disappeared and were divided into much smaller plantations from 5 to 15 acres. 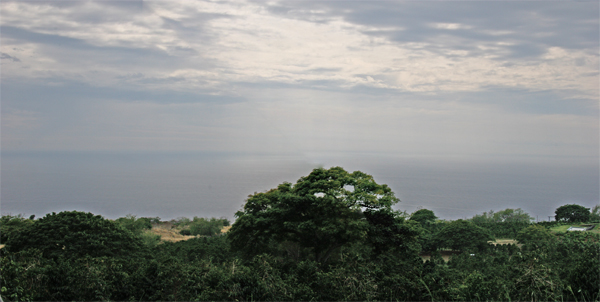 There was a brief escalation in the prices of coffee around WWI when the armies of the world began purchasing coffee, but the Great Depression again sent coffee prices plummeting only to be rescued by WWII and subsequently the Korean war. Coffee prices went through boom and bust cycles throughout the 60s, 70s, 80s and began to stabilize in the 90s, but Kona coffee has always been in demand as a primary, premium coffee and as a “filler” to round out cheaper blends of coffee.

Of course Kona coffee is a bit on the expensive side, but what you get is a luxury experience combined with the knowledge that if purchased from plantations like Aloha Island Coffee, you are drinking organically grown coffee that does not rely upon child labor or any of the other blights that plague some of the other world coffee markets.

Tomorrow we have horseback riding in the Waipi’o Valley.