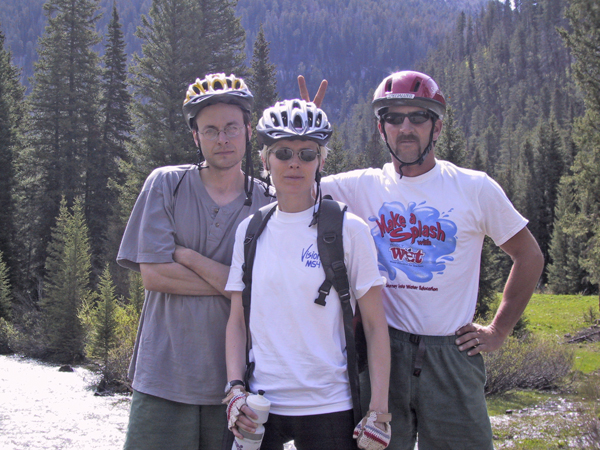 H, C, T and I went for a ride up Darby Canyon today and had a interesting little experience. After riding to the top of the canyon road to the trailhead where this picture was taken, we started back down the canyon. T and I were out front by a considerable distance, riding fairly fast when we started hearing a crunching sound in the woods down below forcing us to slow. We stopped the bikes, wondering what it was we were hearing when grunting came out along with the crunching of wood. T and I looked hard into the tree-line when T said “bear”. I punched him in the shoulder and said “quit screwing around”, to which he replied by simply pointing. Sure enough, an adolescent grizzly bear was walking up the canyon just off the road, so T and I started flagging down H and C who were riding up fast behind us. We notified them of the bear which caused a not insignificant amount of concern on H’s part, but this is not the first time I’ve seen bears in the wild, not even the first grizzly sighting. Usually, they want nothing to do with humans and this was no exception. Riding down the mountain would not have done any good until the bear had yielded his ground as a grizzly can easily keep pace with even the fastest pro downhill mountain bike rider, so we simply minded our own business, not looking directly at the bear until the bear took off up the side of the mountain. At that point much to H’s relief, we headed back down the canyon for a rather tasty lunch back at the homestead. As I said before, I had run into bears before including black bears and grizzlies up in Montana, Utah and Northern California and have never really had a problem with them. I make sure to not do anything that would cause a direct conflict like making sure they are aware of my presence in the first place and I don’t keep food easily accessible as the best approach is to minimize direct contact. I often take bear spray with me, but when I’m not in National Parks, will also pack a .45 caliber sidearm as a last resort, although, even that round will not do much to stop a full grown grizzly. If you’ve ever examined a grizzly skull, you will know exactly what I mean, so again, the best approach is not to tempt fate in the first place. If you do find yourself in a surprising yet unavoidable encounter with a bear, under no circumstances should you run. Try your best to remain calm as they can detect stress, and assume a non-threatening posture. Do not look directly at the bear and use your peripheral vision to keep track of where the bear is. If the bear stands up on its hind legs, this does not necessarily mean an aggressive stance. In fact, even if a bear charges you it may not mean the bear will attack. However, if a bear does come within 10 feet or so and you do have bear spray, use it liberally spraying the bear in the face if possible. At this point, if you are being stalked or directly attacked and you cannot escape, your strategy should change by assuming a more aggressive position. Shout, make yourself bigger and use anything you have to intimidate including rocks trees or anything available to let the bear know you will not be easily taken as prey. A calculation I am willing to make for myself if alone is a decision to not attack the bear unless I am directly contacted by the bear. In that circumstance, I will use a large caliber sidearm in defense, but if you are unarmed, and aggressive postures fail, protect your neck, stomach and chest by assuming a fetal position and wrapping your hands around the back of your next to protect vital organs and CNS function. However, that said, a bear will usually not take things this far unless it is looking for food and using you as prey because it has run out of other available food resources. For further information, see the National Park Service website here.

One Reply to “Darby Canyon”